Paying tribute to the elegant vineyards of the Valdobbiadene region, Santini's Giro d'Italia 2015 Stage 14: Treviso/Valdobbiadene Jersey encapsulates the luxury and timeless quality of this Prosecco producing region, which plays host to the only ITT of the 2015 edition of the Giro. 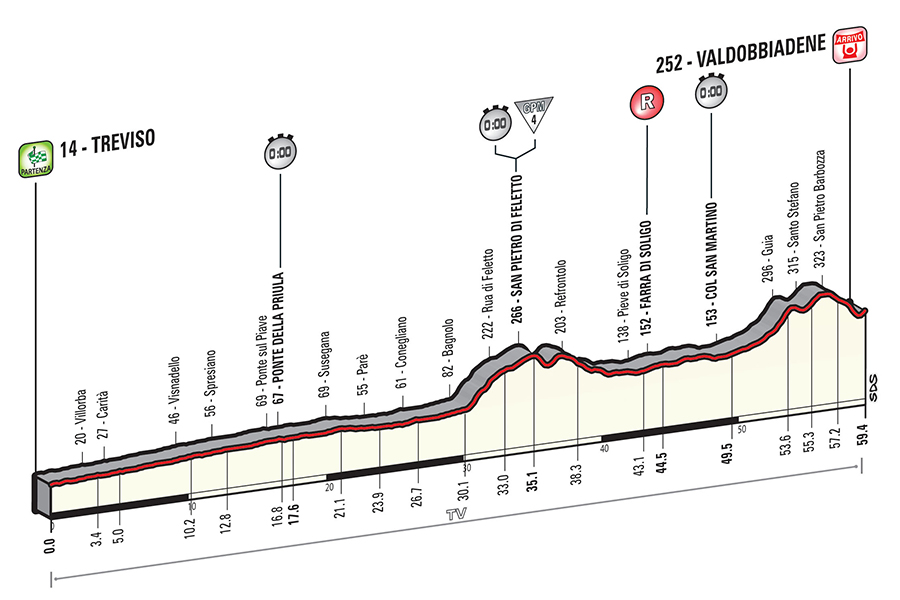 Viewed by many pundits as the most important stage in this year's race, in terms of the overall GC, Stage 14 sees riders taking on the only individual time trial of the race, and what a time trial it is shaping up to be!

The route takes riders through the famous wine growing region of Veneto, home to the finest Prosecco. The route is colloquially known as the 'Prosecco road', nevertheless, the riders won't have time to stop and taste the bubbly, well at least not for another seven days until they reach Milan.

59.2 kilometres from Treviso to Valdobbiadene; the route will push many non-specialists to the brink and even with only one category 4 climb mid way through the stage, the sheer length of the route will be daunting. Any time lost during this ITT will be compounded by the stage's prolonged length and any riders losing serious time will be unlikely to recover them during the incredibly hilly final week.

Last time there was such a long time trial as part of the Giro in 2009, the winner, Denis Menchov, was able to put almost a minute into his strongest rivals; an advantage he held till the end of the race. The GC contender that performs the best today could well do the same.

Resplendent in his Austrialian National Champion's jersey, Richie Porte is a man in desperate need of some serious time gains if he is to challenge for a top five spot in the mountainous final week of this year's Giro. Porte has looked strong in time trials this season; taking first place and the overall victory in the TT final stage of Paris-Nice back in March. However, Stage 14's onerous parcours will most definitely push the dogged Tasmanian into the red.