With plans for an epic 350km (217 mile) ride from Dorset to Le Mans, France, Richard and his brother Joe took on the Sigma Sports Challenge Series Wiltshire Wildcat Sportive to get some miles in their legs.

People ride for different reasons, be it to explore a new area, embrace nature or to challenge themselves. Looking for an adventure and wanting to spend some time with my brother, Joe, access to a family home in Le Mans, France sparked the idea of an epic ride. Joe and I, who as 10 and 12 year old kids discussed riding the coastline of the UK, decided to make this our final destination, aiming to ride there from his home in Dorset.

Before even thinking about this seriously, we had to work out if it was feasible in terms of fitness. I am a cyclist and have been for 14 years. I have ridden in France, Germany, Austria, Switzerland, the US, South Africa, Taiwan and Korea, to name just a few places. My brother, two years older, became interested in cycling in the London Olympic year. After a brief spell away from the sport, he is now back on the bike and is keener than ever. He can do 100 miles on his bike, using dogged determination rather than fitness; a trait I am rather jealous of. What he lacks in fitness he makes up for in his enthusiasm for a challenge, and he is stubborn. These are attributes, I believe, that really define a cyclist.

If we were to have any chance of completing this challenge we needed the motivation to train. For his Christmas present I found the perfect answer, the Wiltshire Wildcat Sportive. This was to be his first sportive. Starting in Salisbury, the route would take us into an area not a million miles from where we were brought up; heading out towards Blandford. I entered us both into the Epic 80 mile category.

It’s not been a great winter for cycling. Yes, we both have great kit - I work for ASSOS - but icy weather and a spell of commuting by trains and cars rather than by bike meant we needed to get some miles in. Living in the south east, I spent an hour or so on Saturday getting my kit together and my bike in the car, before heading off to the B&B I’d booked in Salisbury.

On the day of the event, a chilly March morning, I met my brother and an old school friend in the large parking area. Kit on, bike prepped, and we were ready to roll down to the start line at 8am. The route itself was undulating and, leaving Salisbury Racecourse, we immediately descended into the valley and down towards the town of Stratford Tony, where we followed the river Ebble to Broad Chalke. This was a gentle introduction and allowed people to find their climbing legs over the next 12km or so to Berwick St. John. This was leafy village lane cycling at its best.

Shortly thereafter it was time for the ‘Queen Climb’ of the event. This is ‘Win Green Hill’ and is a Strava category four ascent. The incline reached over 15% at times and helped to thin out the groups as the faster riders pressed on. It pays to remember that at an event like this, some of the riders who are going very fast aren’t necessarily on the same route as you. With legs burning, we reached the top of the climb and paused to enjoy the view. From there we rolled past Compton Abbas Airfield just outside of Shaftesbury before plunging down to Fontmell Magna and the first feed station.

This is one of the things I love most about these events - the people manning the feed stations. Whether it’s helping with mechanicals or keep you topped up with energy food, these individuals are invaluable. Science in Sport were providing energy food and this was complemented by a selection of jelly beans and flapjacks. After a quick refuel we set off on the loneliest part of the ride. I’m not sure how many ‘Epic’ riders there were, but heading towards Marnhull we had the route to ourselves.

This was our neck of the woods. My brother and I were now on roads we had ridden as kids. Changing direction, we realised quite quickly the wind had been behind us. Heading away from Sturminster and into the wind, we had the west Wiltshire Downs to climb up once again. Iwerne Minster saw another viciously steep ascent up Boynes Lane. It is the type of climb the British are particularly good at. I mean, why build a road diagonally ascending an incline when you could just go straight up the thing?

Getting a feel for the roads, we descended to Tarrant Rawston, passing the halfway mark. So far, so good. At the 90km mark we were beginning to feel the distance in our legs, but the picturesque roads kept our minds off the pain. A beautiful tree lined avenue provided an opportunity to pull my phone out for photograph.

The next 40km were undulating so we put our heads down and pushed on. You know the feeling by this point in a ride. You will have five minutes of feeling great and relaxed and then the next five minutes feeling like everything is a struggle and that the whole thing was a bad idea. The third and final feed stop was just ahead. My brother, Joe, probably feeling the effort like we all were by this point, barely stopped. I don’t think he wanted to give himself too much time to think about restarting. Chasing back on, I caught him on a short sharp climb out of Cranborne. We were on the final approach now, which consisted of a gradual 7km climbing before dropping down to Coombe Bissett.

We now faced perhaps the worst challenge of the day. Climbing the 70 metres back to Salisbury Racecourse and the finish. Concluding what was a fantastic day’s cycling – we were buzzing. This was an ideal way to explore Wiltshire and for me, a perfect opportunity to spend time with my brother. Next stop Le Mans. 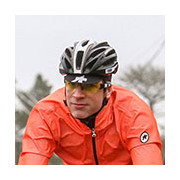