With roots in the ski industry, Ed Scott founded Scott Sports in 1958, originally manufacturing ski poles. First moving into the cycling world in 1986, the American company led the way with their first full suspension mountain bikes entering the market in 1992. Since then Scott have grown their range to offer road, cyclocross and triathlon bikes. We’ve taken a look at three of the company’s headline bikes for 2017.

With Tour de France stage wins, Milan San Remo victories and Liege Bastogne Liege triumphs, the Scott Foil is the American company’s foray into the aero road bike market. The bike of choice for the likes of Caleb Ewan and the Yates twins, the Orica Scott team issue Foil is a hardened race ready machine. 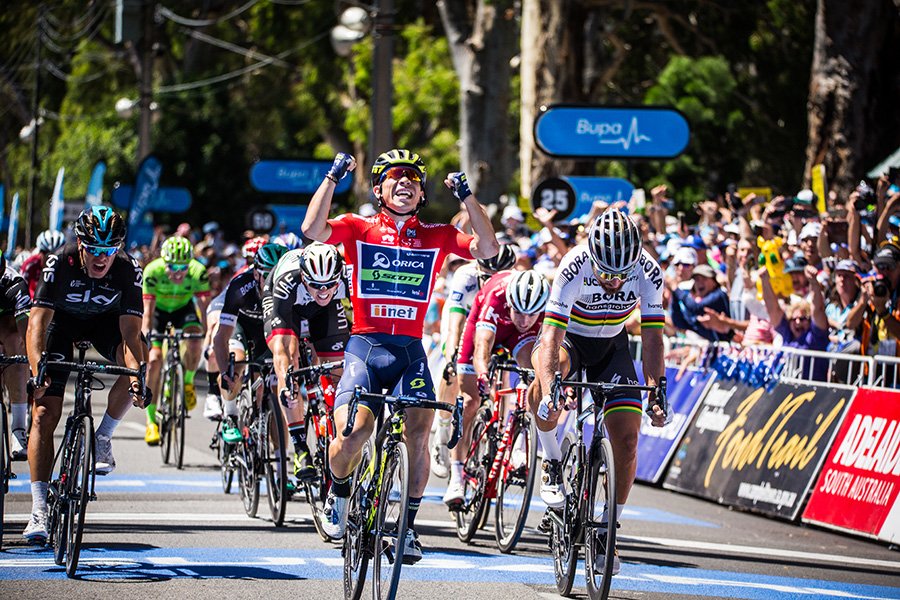 Now in its seventh year, the Foil’s innovative use of F01 Aero Technology has been retained for 2017. Just like a fighter jet, Scott’s premium aero road bike uses truncated airfoils to reduce drag and increase speed. Scott were one of the first brands to adopt this airfoil shape, which aims to work around the UCI’s 3:1 airfoil ratio limit. 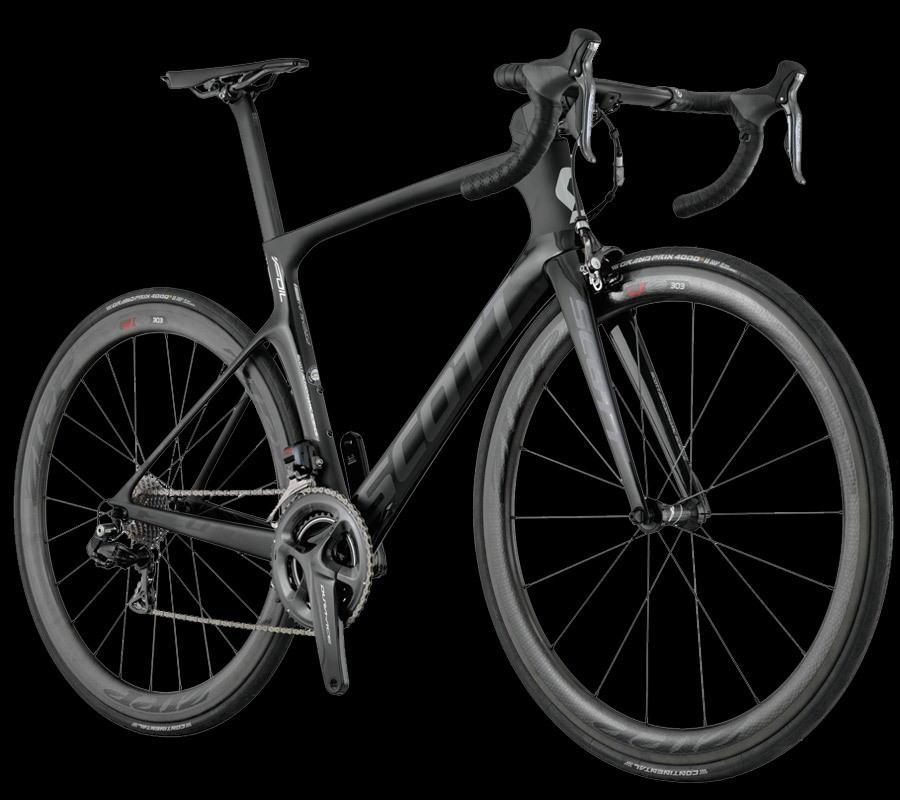 Using a traditional tear drop platform, the Scott Aerodynamic Science unit tackled the issue of stiffness and truncated the tube airfoils to ensure stiffness isn't compromised. This means power is never compromised, whether that be sprinting out of the saddle or up a climb. 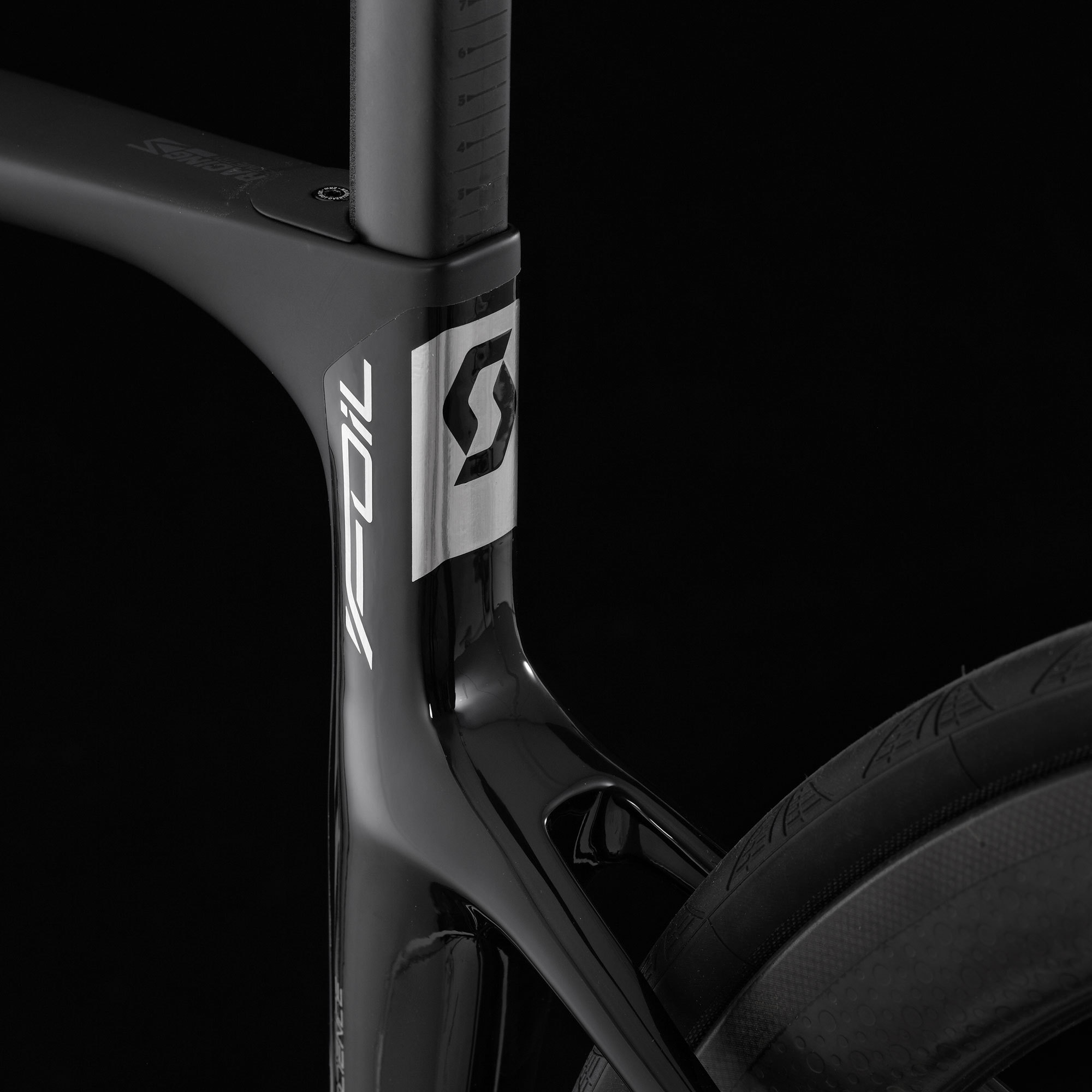 Aerodynamic enough for the flat roads of Belgium but also no slouch in the mountains, the frame weighs a mere 945 grams, which when paired with the 335 gram fork, makes it one of the lightest aero frames on the market.

Everything from the carefully designed CFD optimised headtube to the direct mount rear brake design, which sits under the bottom bracket, has been adopted to reduce drag and optimise speed, without affecting practicality and performance. 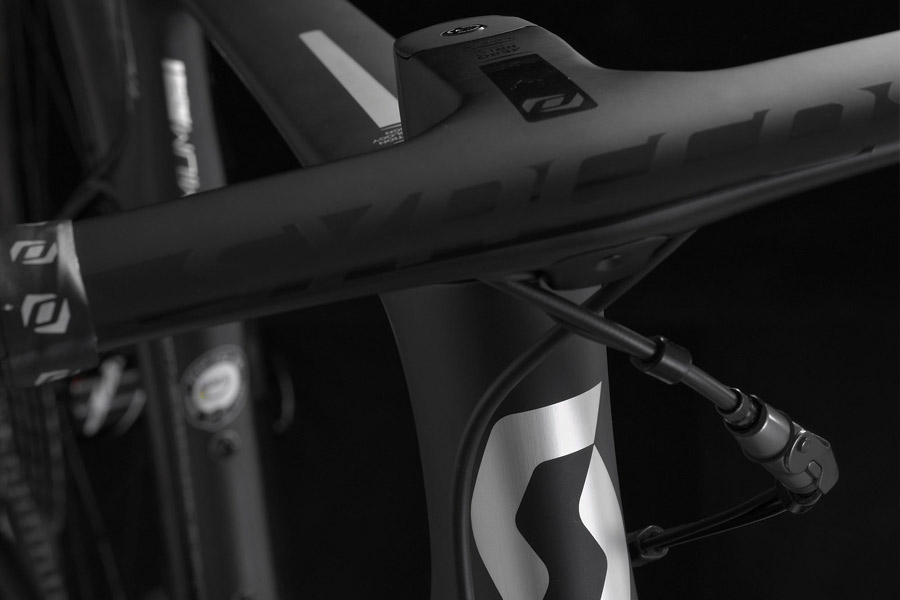 Tested by the renowned German TOUR magazine in the windtunnel, the Foil, at a 45km/h air and wheel speed, with yaw angles ranging from -20° to +20° produced savings of 6 watts on average over the tested yaw spectrum compared to its predecessor. In real world terms that’s a saving of 27 seconds over a 40 kilometre distance, at a 45km/h average speed. Out on the road this equates to serious time savings, whether that be racing or aiming for that gold time at a sportive. 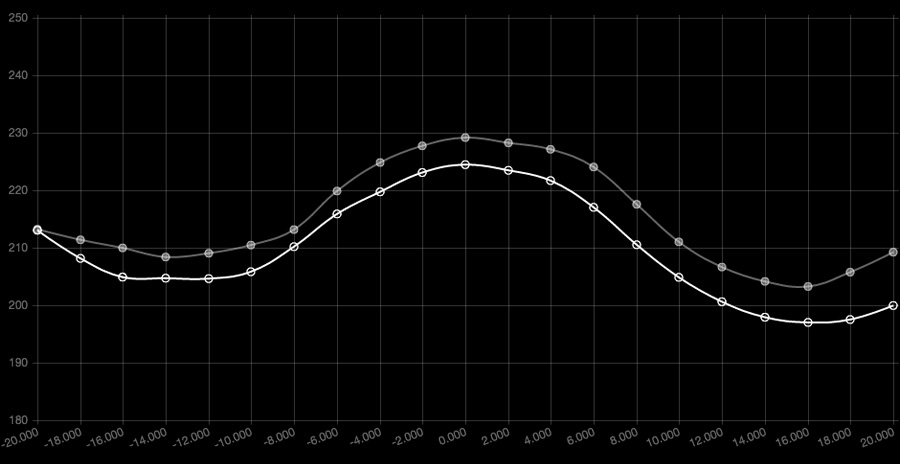 The combination of windtunnel testing, pro rider feedback and wins in some of the sport’s biggest races further bolsters the fact that Scott’s Foil is a performance optimising machine.

For those that love to explore the road less travelled, Scott’s Solace delivers the perfect ride. The carbon fibre endurance frame construction ranges from the HMF IMP Carbon entry level layup to the flagship HMX carbon constructed Premium Disc. These carefully considered carbons have been chosen for their durable, stiff, yet comfortable properties. 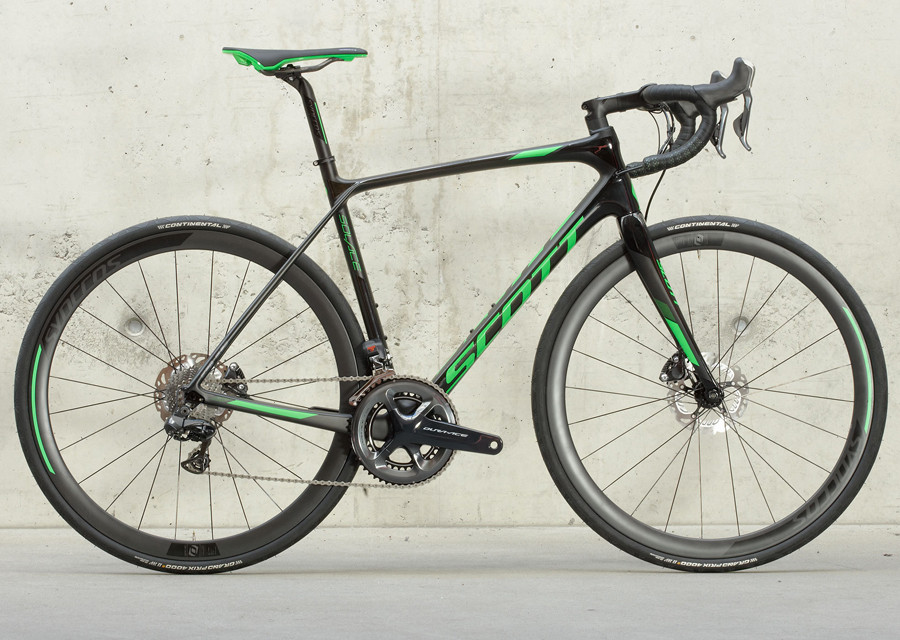 The HMX design consists of two zones, a Power Zone and a Comfort Zone. These work together to provide a stiff, responsive and comfortable ride. With Scott’s CR1 leading the way with Shock Damping Technology (SDS), which consists of specially designed tubes and wall thicknesses, this technology has been further developed for the Solace. Used by pros at Paris Roubaix, this technology dampens road vibrations and ensures your ride is a smooth and comfortable one. 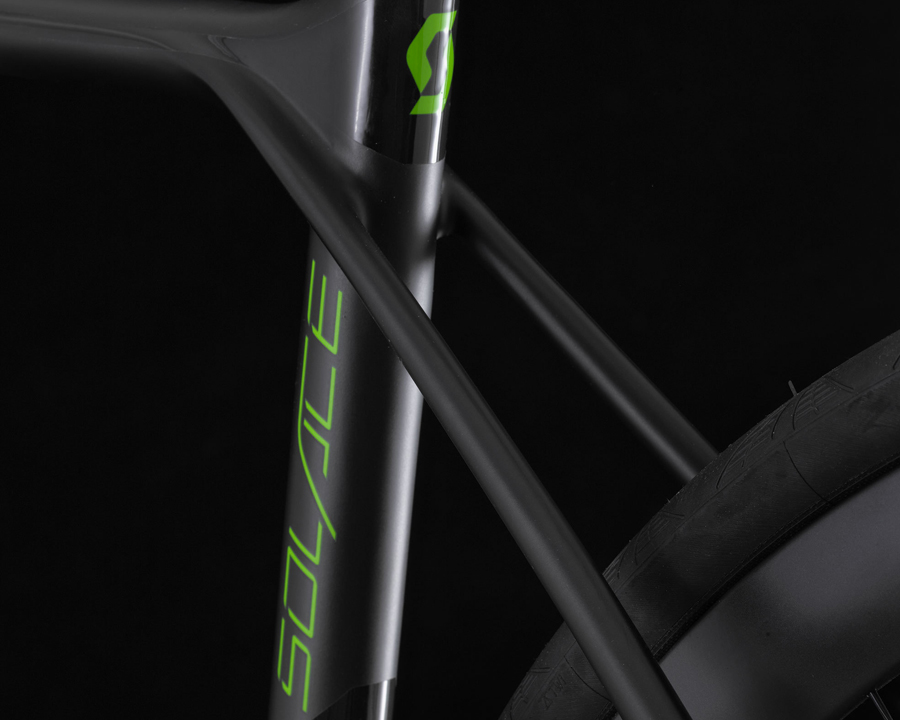 Comfort on the frame centres around the seatpost, toptube, seattube and seatstay joints and as a result Scott has developed a Comfort Zone around the rear triangle and seatstays. The seatstays have been attached directly to the toptube, thus improving comfort without reducing headtube torsional stiffness. 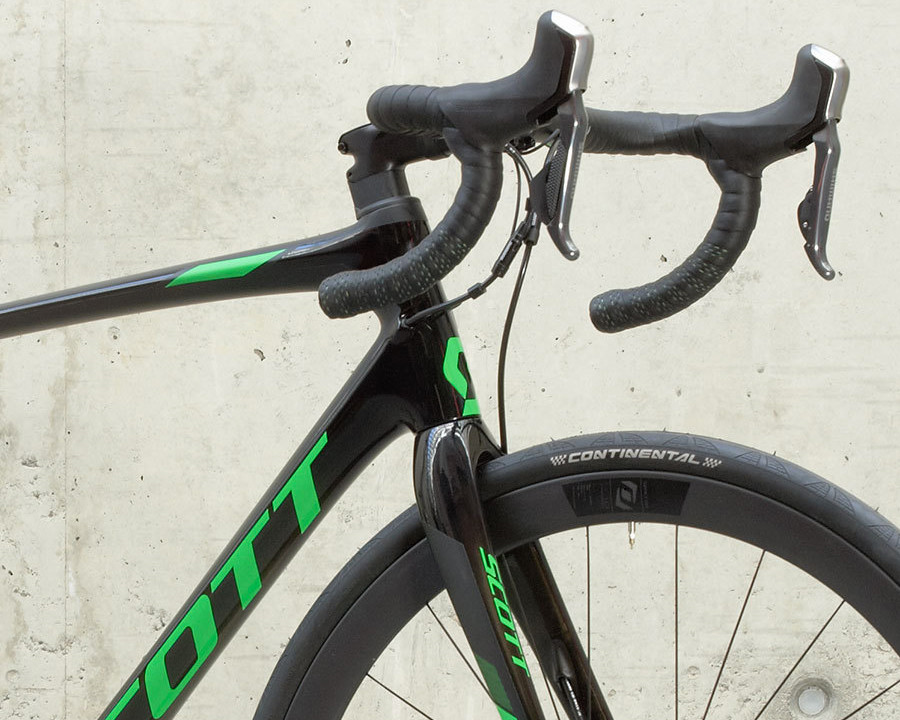 The bridge between the seatstays was also removed by Scott’s designers to ensure comfort through seatstay deflection is not an issue. Upfront, and the fork’s carbon steerer and crown has specific carbon lay-ups to enhance handling, stiffness and braking efficiency.

Comfort covered, Scott moved onto speed and performance and analysed compliance and power transfer to create their Power Zone. The creation and potential loss of power centres around the bottom bracket. The Scott designers recognised this and increased the bottom bracket area size on the Solace and reinforced the tapered headtube and steerer. An oversized downtube and asymmetrical chainstays and seatstays further adds to this frame’s responsive design.

When every second counts the Scott Plasma comes into its own. Propelling Orica Scott at some of the world’s biggest time trials and keeping some of the sport’s top Ironman athletes at the sharp end of the race, the state of the art design aims to create a seamless aerodynamic fusion between rider and bike. 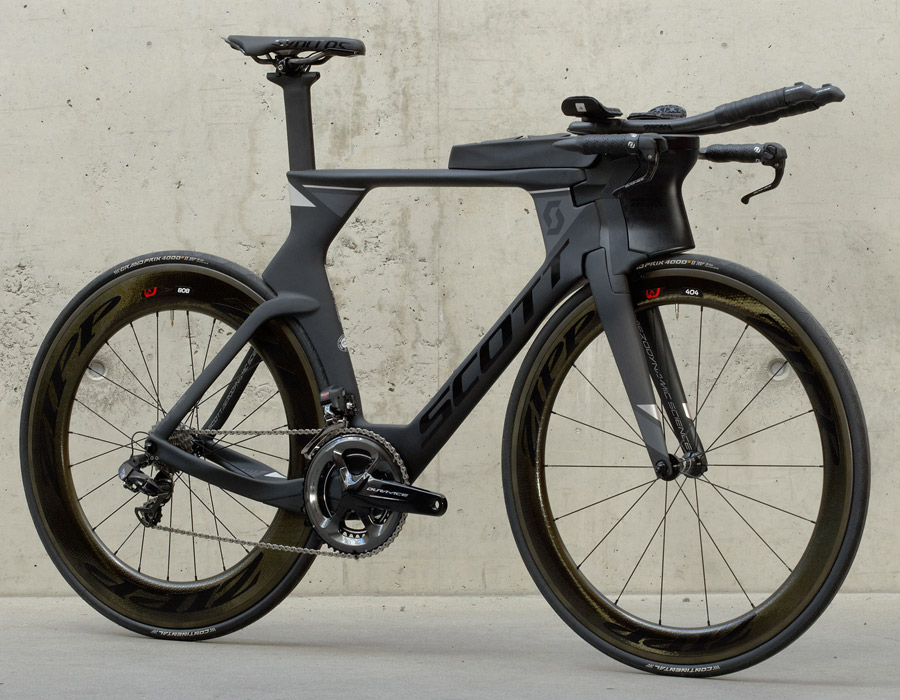 Every component on a Plasma has been chosen for aero efficiency, speed and functionality. Putting the rider in the most aerodynamic position, the bike can be adjusted precisely to fit your riding style and body shape, thus ensuring no power is lost out on the road. 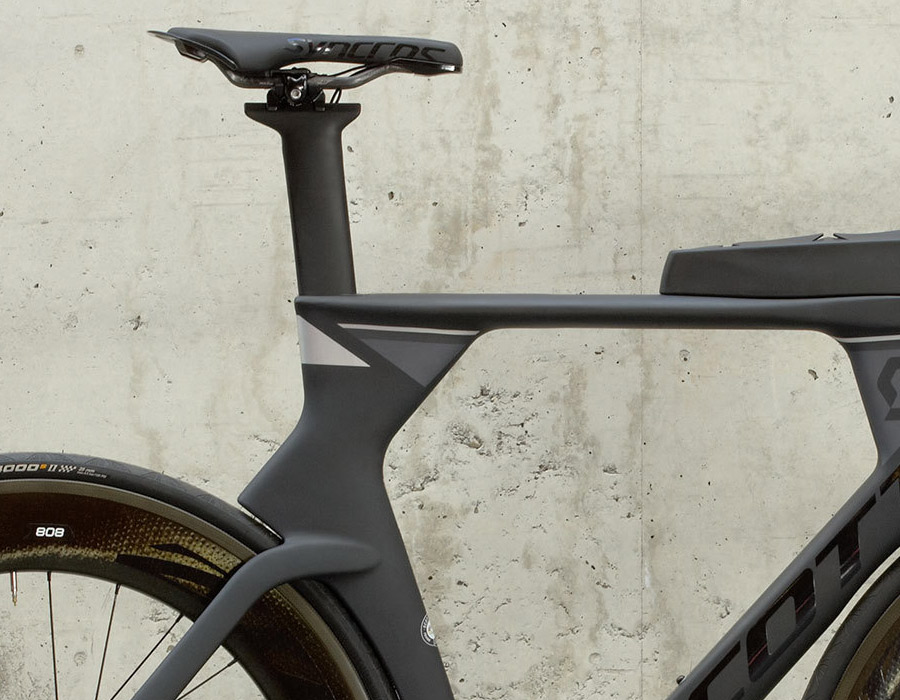 The Plasma Premium is designed for the triathlete looking to spend several hours in the aero tuck. With an integrated fuel storage system that sits around the bike’s cockpit, you can ride safe in the knowledge that your nutrition and hydration needs are catered for. 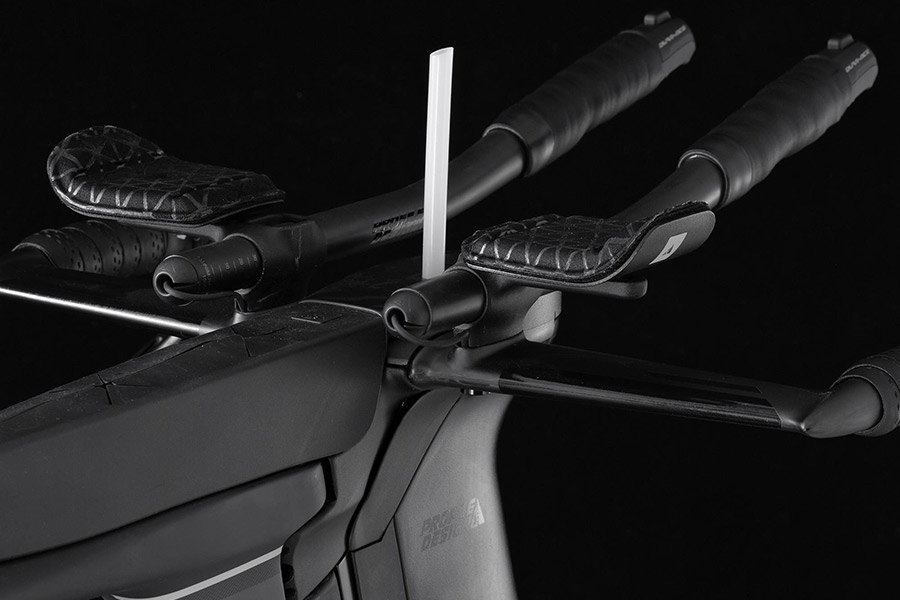 A race tuned machine, the Plasma Premium is as practical as it is fast, with a carbon fibre frame, TRI specific geometry and Profile Design Plasma 5 Aeria Handlebar, which has been specifically designed to work alongside the bike and rider. 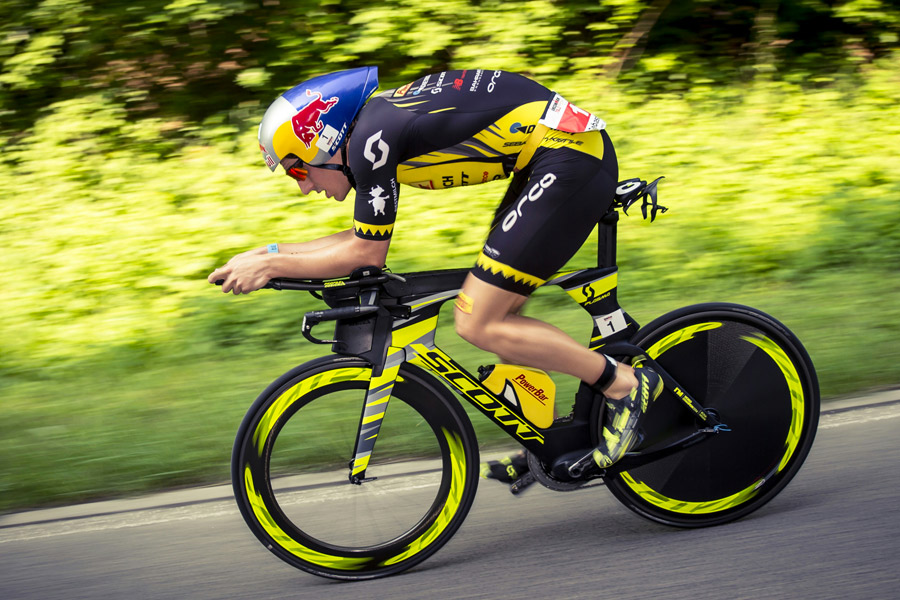