The component manufacturer 3T has been around since the early 60’s and started out focusing on the fabrication of lightweight handlebars for professional cyclists. With a clear focus on aerodynamics, ever since designing the cockpit for Francesco Moser’s successful hour record attempt in 1984, they have remained one of cycling's most innovative brands.

It has taken until now for 3T to delve into the world of frames and the two frames they have developed have certainly caught the attention of the cycling world, with radical looks and forward thinking designs. I managed to get hold of the Strada Team, which is their performance road offering, over the Christmas period (Merry Christmas to me) to test it out and see if it lived up to the hype.

Aesthetically the frame is very striking, with an obvious focus on aerodynamics; it looks more like a modern time trial bike than what you might expect from a road bike. The development of the frame was headed by Gerard Vroomen, Cervelo co-founder which if you are familiar with their bikes, will probably come as no surprise. The seat tube wraps perfectly around the rear wheel in a very similar manner to the Cervelo S5, albeit with enough clearance for a 28 millimetre tyre (is is worth mentioning that the bike I rode came with 28 millimetre Continental tyres which actually measured around 31 millimetres wide when I took the calipers to them) which is a very progressive amount of clearance for an aero bike.

Where the front wheel meets the down tube, which I have been reliably informed is the most important area of the bike, aerodynamically speaking, there is scarcely enough room to fit a business card between the tyre and frame. This adds up to about 18 centimetres of carbon and rubber from the inside of the deep section wheel to the other side of the downtube! The cable routing is not nearly as integrated as it is on some other brands aero offerings, but it is still fairly neat and very reminiscent of the Cervelo S5. There may be a lost couple of watts from the cables being on show, but making changes to the front end of the bike will be much simpler. It also features the now almost ubiquitous dropped seat stays, which ensure minimal flex at the bottom bracket, maximum aero benefit and a very fast look.

The biggest talking point with the 3T Strada is undoubtedly the lack of a front derailleur. It has been designed around a single chainring system and it is not possible to run a front mech. The 1X (pronounced ‘one by’) system has been around for some time now in the world of off-road riding and I am definitely a convert as soon as the tarmac ends. When mud and rough, unpredictable surfaces come into play, the front mech can easily become a hindrance and a single chainring paired with a wide range cassette is easier to use and much more reliable (try shifting into the small ring with a derailleur choked with mud). Ditching the front derailleur on the road, however, is something that I was very sceptical about. My doubts were soon put to rest though.

I normally like as tight a cassette as possible when I am riding; a 12-25 is my default ratio and I’ll only change to something bigger when travelling to mountainous areas. Needless to say, the idea of an 11-36 cassette on a road bike seemed ludicrously wide and I was sure that I would be constantly shifting up and down in a vain attempt to find the right cadence, but to my surprise, I was much less bothered by it than I expected to be.

When I was riding by myself and I shifted into a harder gear, it seemed as though I could just press harder on the pedals and bring my cadence up to a comfortable speed, with very little extra effort, almost as if the bike was daring me to ride faster. This was less useful when riding in a group and I did find myself occasionally spinning away like Chris Froome only to change gear and find myself grinding far too big a gear, but for the majority of the time it was fine and it didn't hinder me at all.

The hardest climb I took the Strada on was Staple Lane in Surrey, which is just over 2 kilometres in length with a maximum gradient of around 14%, so it’s not the toughest climb in the world, and although I wouldn't necessarily say it was a struggle, I did have to get out of the saddle to push myself over the steeper parts of the climb. If my ride had taken in more climbs (I didn’t fancy too much climbing as it was the middle of the winter) I suspect that I would have started to wish for an easier gear.

The Strada I rode was built with a 50 tooth chainring and the largest sprocket on the rear was a 36. If most of your riding is in a hilly or mountainous area, a smaller chainring or larger cassette would probably be a better option. There are plenty of different cassettes on the market designed for 1X systems and 3T are due to release some with ratios specifically for the Strada and road riding, so there will surely be one that works for your needs.

Overall I was pleasantly surprised with how the 1X system worked on the road and with the possibility of 12 or even 13-speed groupsets on the horizon and 3T developing their own cassettes for the road, it will be fascinating to see how the technology develops. I might even be convinced to let go of my front derailleur one day.

Aero bikes are undoubtedly fast, but they have had a reputation for sacrificing comfort in the search for speed. This is a pitfall that the Strada steers well clear of; it is the most comfortable aero bike I’ve ever ridden. I don’t know how much of that is due to the 28 millimetre tyres, which I was running at around 75 psi, and how much was down to the frame design, but rough road surfaces and the accompanying road buzz were barely felt in either the saddle or handlebars. This was one probably the most surprising and impressive things I found with this bike.

The Strada is a fast bike. Very fast. Cutting edge aerodynamics and a very stiff head tube and bottom bracket make a bike which accelerates with amazing ease and holds speed effortlessly. I had high expectations but was not disappointed in the slightest; I’ve ridden a number of aero bikes before and the Strada feels as fast as anything I have ridden previously.

Even when I was riding into a headwind, the low position the bike put me into and the deep carbon wheels and aero frame made life noticeably easier, as confirmed by comparing power meter readings with a friend who was riding next to me and having to work about 10 watts harder than me (it should also be noted that he is about 20 kilograms lighter than me).

When I turned around and had the wind working with me, the bike simply flew along and even if I stopped pedaling the bike would barely lose speed. The return leg of that ride, with the wind on my back was honestly one of the most enjoyable rides I’ve done in some time. The bike weighed in at just under 8 kilograms in a size large. Far from superlight, but by no means heavy and I found with the super stiff bottom bracket, it climbed with ease.

The 3T Strada is a disc brake specific frame, which is a great thing as far as I am concerned. Disc brakes are simply better and it is where the future of stopping on bikes is heading. Going for a disc specific frame also opens up a lot of options when it comes to frame design and the Strada would simply not be possible were it not for disc brakes; the very low fork crown and accompanying low stack for example. The Strada is the kind of bike which needs deep section carbon rims (it would look rather odd with anything less) which are notorious for their inconsistent and slow braking, a flaw which is completely negated by disc brakes. The bike I rode was equipped with SRAM Force Brakes, which I have used on several other bikes and get on very well with. Given the choice I would probably go for Shimano Dura-Ace Di2 Hydraulic Disc Brakes, as I prefer the shape of the hoods, but the braking from SRAM is smooth, sharp and easy to modulate.

The frame I rode was equipped with 3T wheels and finishing kit (what else could you use?). The Aeronova Handlebar is one of my favourite bars, it has a very long reach which forces you into a low aerodynamic position, without being uncomfortable. They are also very stiff when you are out of the saddle and look perfect on an aero bike. It is difficult to judge a set of wheels when you have only ridden them on one bike, which you are unfamiliar with, but the 3T Discus C60 Wheels seemed very good. They were certainly stiff and they felt fast, but I didn’t feel hugely comfortable when I found myself riding in a stiff crosswind, although that is arguably to be expected with a wheel of that depth.

The frame geometry is definitely on the aggressive side, which I much prefer, but if you prefer longer rides with less emphasis on speed, you might find the geometry uncomfortable after a while. The frame is only available in a S, M, L and XL at the moment, so riders on the shorter or taller side might be left out, as the S is not particularly small and the XL is not particularly large. Hopefully, if the frame is commercially successful, which I am sure it will be, they will increase the size range.

The 3T Strada is a serious contender for the best road bike I have ever ridden and as 1X technology develops I think it will only get better. With careful choice of gearing and perhaps a spare chainring or cassette, there is very little this bike couldn’t do. Fingers crossed I get to take it out again in the summer. 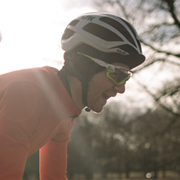