German company ORTLIEB has pioneered waterproof equipment in the outdoor market for over 30 years and in their own words "design and manufacture innovative waterproof products that enable our customers to better navigate their world, live out their dreams, and respect our planet every day". These may seem like lofty goals but when you dig into the 30 years of Innovation that ORTLIEB has achieved with their backpacks, touring, bikepacking gear, and much more it's easy to see how they make this possible. We have brought together everything you need to know about ORTLIEB below.

To learn about the history of ORTLIEB you must first cast your mind back four whole decades to 1981, a young German man went touring the south of England by bike and to no surprise, he was caught in a rainstorm. As he was sat by the side of the road taking a break he watched lorries roll by him in the downpour. He noticed these lorries protected their cargo with impermeable plastic side curtains that kept water out but were still flexible when drivers needed to open the trucks. This young man's name was Hartmut Ortlieb and at that moment he envisioned his first-ever bike bag.

On his return to Germany Hartmut Ortlieb put his ideas into motion and made his first bike bag, using the same tough material found on the lorries, on his mother’s old sewing machine. Harmut sold his first units to local dealers and word quickly spread, culminating in the official ORTLIEB company being founded in 1982. In the first year of operation, the now classic welded seams were introduced. As like today, all the bags were 100% waterproof and soon the company began to grow. Fast forward to today and the company now employs more than 220 people in Germany, all making products to the same high standards as they did in 1982.

Being an early innovator in the bikepacking world it is no surprise that Ortlieb welcomed the rise of gravel cycling with open arms. In 2016 they launched their first market leading range of products that stick to the original Ortlieb waterproof, welded seams and well designed roots. Ortlieb's designs are so waterproof that most of their current line of gravel bags can be fully submerged in water and still keep the contents dry. This means they can tackle whatever the trails could possibly throw them, however far you want to ride. Not wanting to leave anyone out, the ever expanding range of clip and mounting designs from Ortlieb mean there are options from their line up regardless of what bike you ride, from fat bikes to fixies there is an Ortlieb bag for you.

Perfect for the back country or going back to the office

Hitting the trails is fine on the weekends but when you need to tackle the commute ORTLIEB is also there to help. They are arguably best known for their famous backroller bags, first introduced in the 1990s when the company underwent huge international expansion. The bags are still a favourite today for many customers and their roll-top design has influenced the equally popular panniers that ORTLIEB also produce. It is safe to say ORTLIEB has been keeping laptops and office clothes dry on commutes for more than 20 years.

Not satisfied to just succeed in their product design, ORTLIEB also pay close attention to the impact they have on the world around them. At the heart of their environmental and design principles is building amazing products that last and keep broken goods out of landfills. They back this principle up with a five year guarantee on all their bags. In most cases, ORTLIEB offers spare parts and free repairs on their items to keep them going for years after the warranty.

Not only does Ortlieb make products that last but 100% of their production facility is powered by renewable energy sources. In addition to this one third of this energy comes from the companies own roof top which is laced with Solar panels. All of ORTLIEB’s CO2 emissions are compensated and they source 70% of their raw materials from within Germany to cut down on international shipping.

What Bags Will Work For You?

ORTLIEB knows that bike luggage can be confusing, which is why their bag ranges fall into distinct categories, bike bags, bikepacking bags and backpacks.

Bike bags were originally designed for bike touring where you are travelling long distances at slower speeds with lots of luggage, today bike bags are also perfect for those looking to commute to work via bike as they keep luggage secure and dry whatever the weather. Bike bags all use specific fitments to attach to your bike like a pannier rack or fork mounts. Generally bike bags attached to racks and panniers can hold more weight as they are more rigid and use the strength of a metal rack or your bike to support cargo.

Bikepacking bags are best used for fast and light rides like an impromptu overnight camp out or for taking some extra food with you on your longest bike rides on or off the road. The clue is in the name with bikepacking bags they fit to your bike using straps in the same way a backpack fits to your body. They are designed to fit on any bike and do not require racks or fitment points as the straps attach to parts of the bike like the seatpost and frame.

ORTLIEB's backpacks are great for any type of use whether you are making the daily ride to the office or hauling your tent out to the forest with friends on or off the bike. Their simple design makes them sturdy and long lasting with all the space you need to carry any type of gear and keeping it dry all day regardless of the weather.

ORTLIEB is dedicated to offering the best in market performance with all their products and back this up with a five year warranty on all items. You can be confident that there is an ORTLIEB bag that will work for you regardless of what bike you ride or how much you need to carry. 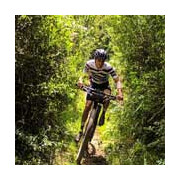