Whether it’s a Tour de France mountain pass or the dust of Paris-Roubaix, you can guarantee the familiar sight of a bright yellow vehicle will be shadowing the riders. Mavic have a long and illustrious history in the sport, making their first appearance at the Tour de France in 1934. That year saw the French company supply Antonin Magne with a set of rims, which, rather bizarrely, he had painted to look like wood to comply with the race organisation’s rules.

Fast forward 39 years and Mavic begins servicing the peloton with their neutral support vehicles, with the first appearance at Paris-Nice that year. Back to the current day and the Mavic support vehicles are as iconic as the Tifosi, Champs Elysee and the Arenberg Forest and can always be spotted out on the course. 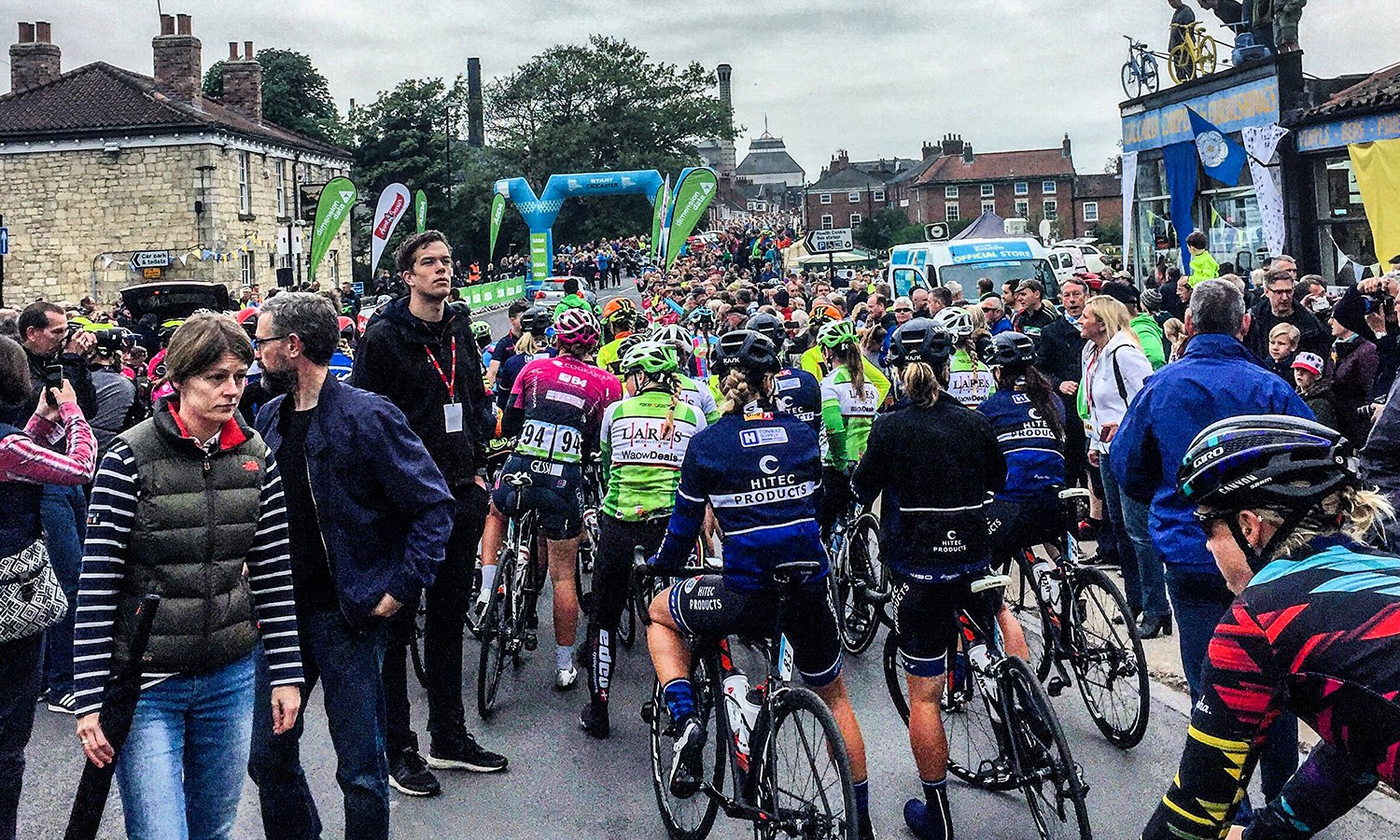 Celebrating its third edition, we were invited to the Tour de Yorkshire, by Mavic, to spend a day with their Service Course and the team behind keeping the race rolling. A 6am wake up call signalled the Tour de Yorkshire for us. We were joining the team for the women’s race and stage two of the men’s race, so had a jam packed day in store.

Surprisingly, Mavic did not have a team in the men’s or women’s race using Mavic wheels, but their role was to provide neutral support for all the riders and teams. For those riders using caliper brakes, Mavic were supplying Cosmic CC40 Tubular wheels and for those using disc brakes, the Ksyrium Pro Carbon SL was the wheel of choice.

Mavic were basing themselves in York, around 15 miles away from the start in Tadcaster. Heading down for breakfast and the Mavic guys were already finishing off and raring to go. Shovelling down some porridge, we sprinted out to the carpark to catch up with a member of the support team, Max, as he set up the cars ahead of the 7 am roll out.

Although they hadn’t needed to provide any wheels or bikes for the riders on stage one, the team were not taking any chances today, with two cars, a motorbike and an abundance of wheels and bikes, ready for any eventuality.

For the women’s race we would be sitting in the second car, which would be positioned behind the peloton. The motorbike and lead car would be travelling ahead, up with the breakaway, ensuring all the riders were covered, should a mechanical incident occur.

Arriving at Tadcaster, an hour and a half before the 9am start, the crowds were already building and the hoardings, gantry and teams were set up, ready to race. Milling around the team cars, we caught up with the Cylance Team and took a closer look at their team issue Cannondales. 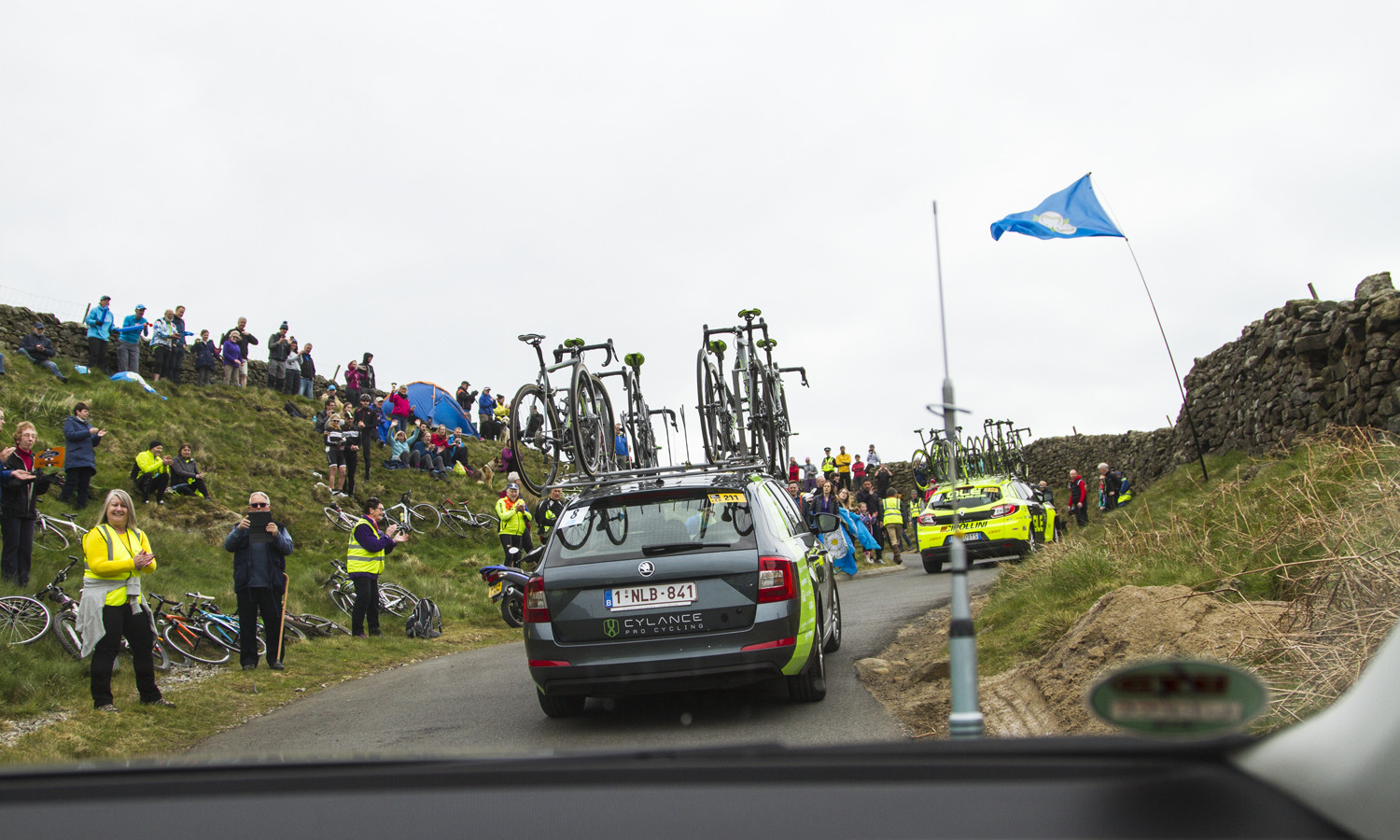 Slotting into the back of the convoy and tuning into the race radio, we awaited direction from the race commissaire. After just 7 kilometres of flat out racing, riders were already showing signs of flagging, with the peloton thinning out as they tackled the tough Yorkshire roads.

Hitting the 60 kilometre mark and with just 62.5 kilometres to race, the still compact bunch hit the major challenge of the day, Cote de Lofthouse. At 361 metres in elevation and with sections reaching close to 25% in gradient, this was going to bring the strongest riders to the fore. 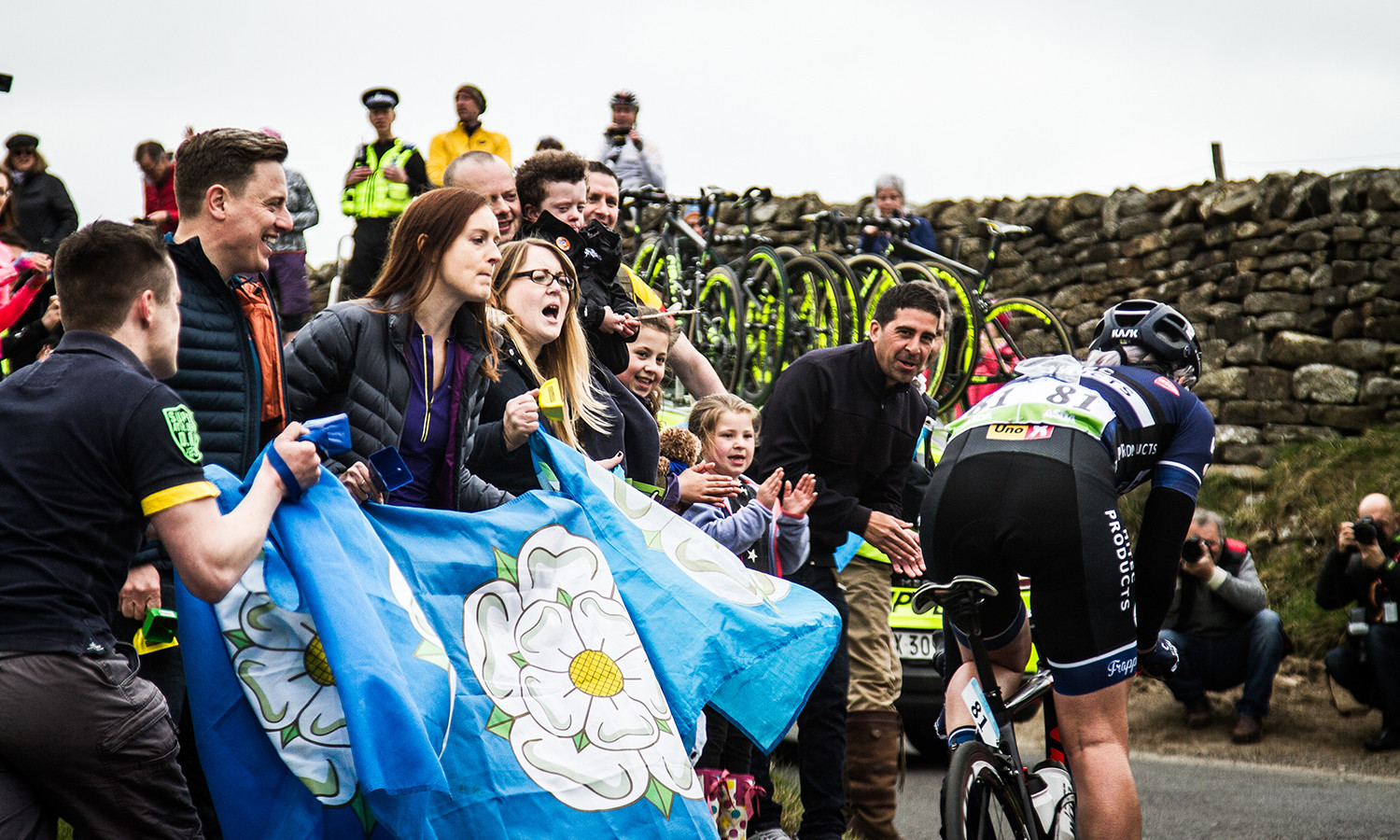 It did not disappoint. Hitting the narrow slopes and making our way with the cacophony of noise and enthusiastic crowds, the peloton blew to pieces. Making our way gingerly past the riders getting shelled out the back, we made our way up to what the commissaire deemed as the main group on the road. This involved a hair raising drive, past 18 team cars, up to the back of the race organisers car.

By the time we’d got up to the front, Lizzie Deignan and a select group had already escaped the clutches of the peloton. This lead group was being supported by the lead Mavic car, with our vehicle staying behind the chasing group, which numbered approximately a dozen ladies. 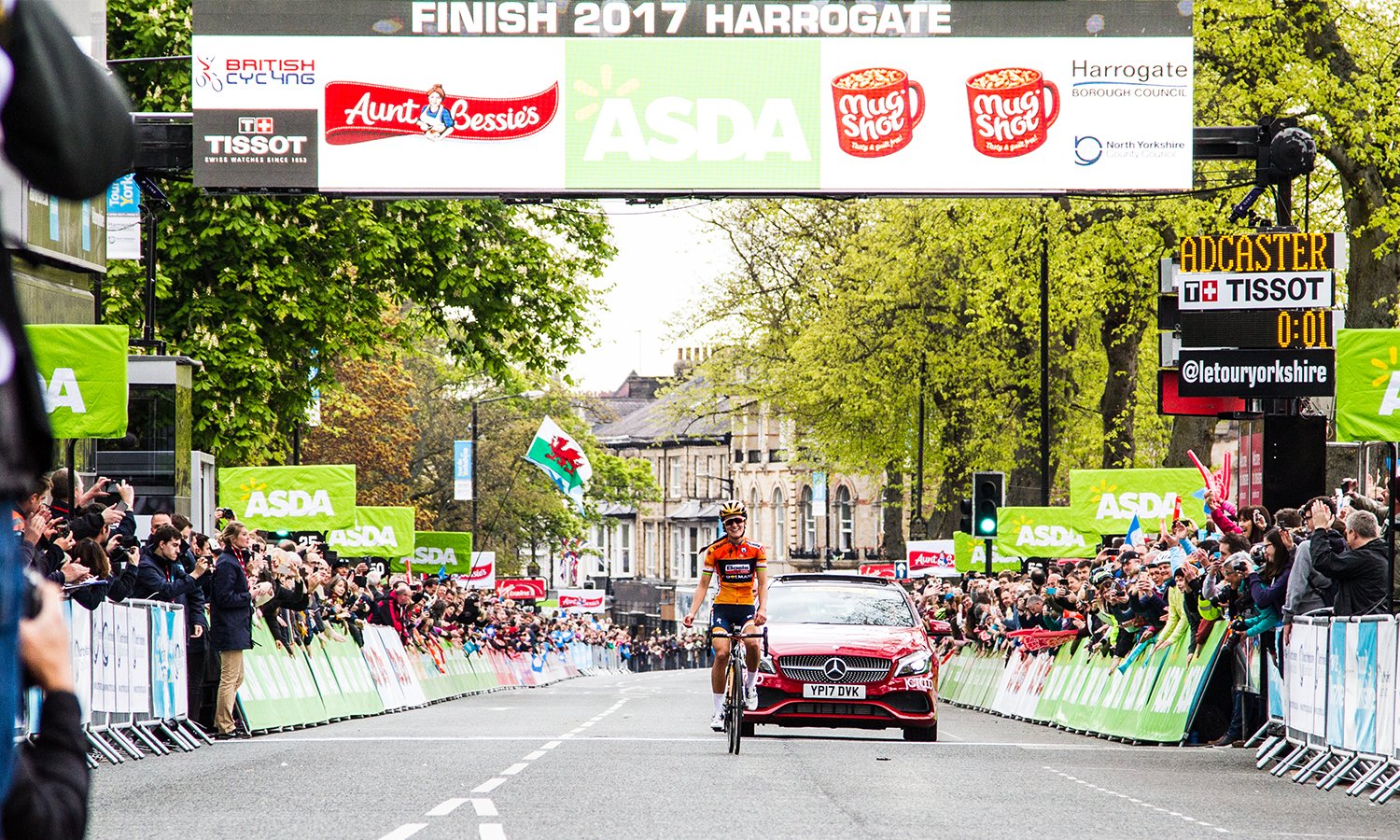 A fast and frenetic pace all the way to the finish saw Lizzie Deignan attack the rest of her group and go solo to take a popular win in front of home crowds.​

With a kilometre to go, we dived off the route and followed the diversion to take us back to Tadcaster for a tight turn around before the men’s race. Arriving back at the start village, there was just 30 minutes before the men’s race set off. A quick spot of lunch and we were away.

The women’s race, in the morning, saw impressive crowds lining the 122.5 kilometre route but the men’s race was something else. Four or five deep in places, it’s safe to say Yorkshire came out in their droves to cheer on the peloton.

Unlike the women’s race, where we were positioned behind the peloton, this would be our chance to see the sharp end of the race. Sitting in the lead Mavic support car, our driver for the stage would be Jacques, head of Mavic’s Service Course and a veteran of driving in 31 editions of the Tour de France. We were in safe hands.

In the back of the car was Nono, another vastly experienced member of the team, who sat poised, surrounded by a mountain of Mavic wheels, ready, should he need to be called into action. 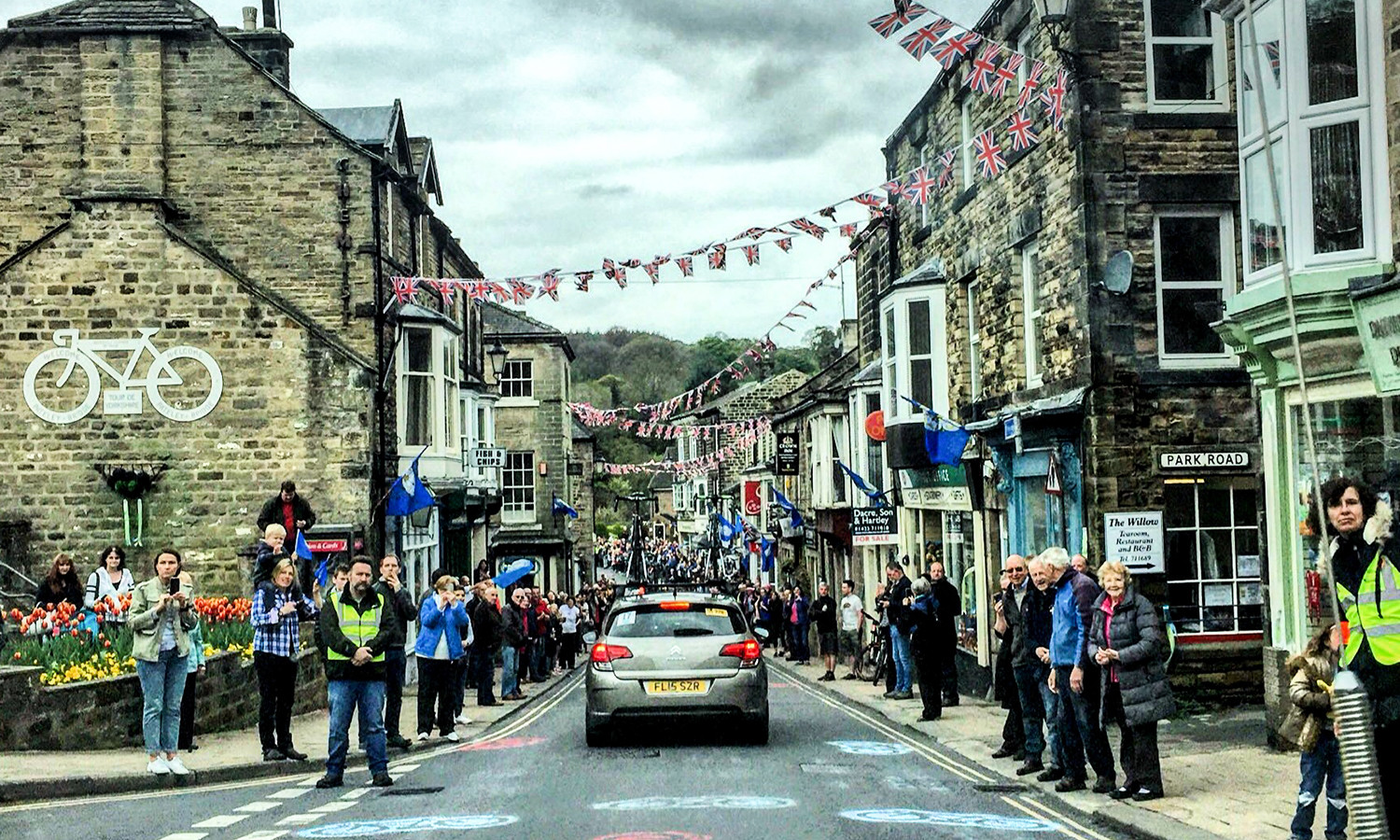 The lead support car works a little differently to the other vehicles, positioned ahead of the race until it is called upon to slot behind a break, should it form. It didn’t take long for the first significant break of the day to form. Being alerted over race radio, we pulled in and waited for the lead riders to appear. Speeding past, we sprung into action.

Joined by the lead riders’ team cars, on the narrow Yorkshire lanes, we were positioned at the front of the convoy, as the nature of the lanes didn’t allow enough space for cars to overtake one another and service their riders.

With the gap between the break and the peloton tumbling, the team cars were told to pull over, leaving just ourselves and the race organiser’s car behind the riders. Into the last hour of racing and the Team Raleigh rider dropped back to the car, clearly showing signs of a hard day out on the bike and in need of some sustenance. Showing his experience and versatility, Jacques was able to provide the rider with a couple of gels and a bottle, before sending him on his way.

Not long after and it was group compacto, as the charging peloton swept up the breakaway. Returning to our original position, ahead of the race, we listened avidly to the race radio and followed the events as they played out behind us. Coming into the finish, we arrived just in time to see Nacer Bouhanni leave the rest in his wake and take victory on stage two of the Tour de Yorkshire. 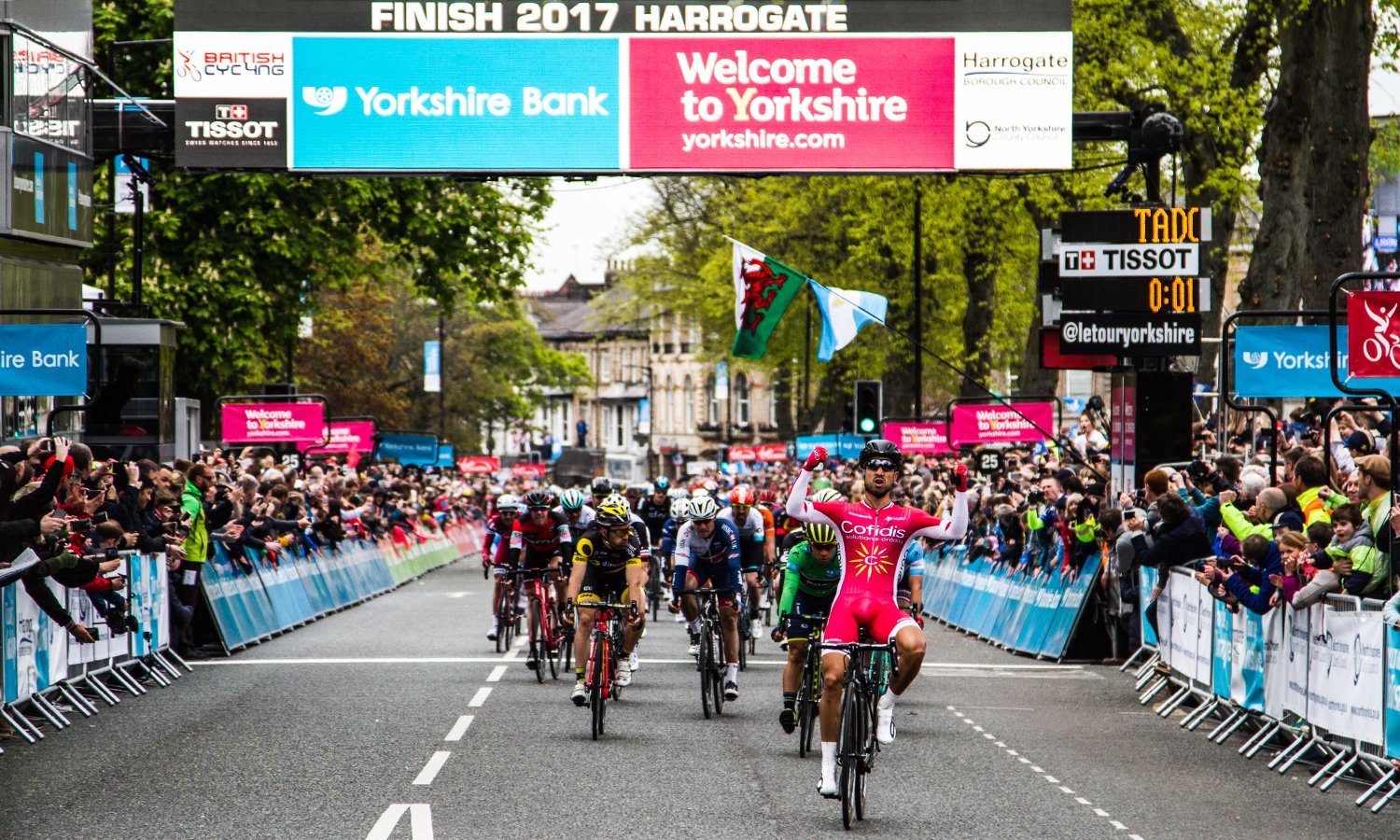 Our job for the day was done. With the dry and smooth roads we were not called upon to service the riders but our presence was definitely welcome out on the course, with the crowds cheering on the iconic yellow car as we made our way through the race.

Finishing just after 5pm, our day with Mavic had come to an end. We’d like to thank Jacques and his Service Course team for welcoming us into the cars and showing us a truly unique insight into the inner workings of the Mavic Service Course.