Italy. A proud nation at the heart of Europe that for many, the mere mention conjures up images of sun drenched vines, stunning mountain passes, gravity-defying leaning towers, mouthwatering cuisine and a picturesque city-centre canal network only rivalled by Birmingham. But ask cyclists all over the world what springs to mind when they think of Italy, and the answer is unanimous; La Maglia Rosa.

The pink jersey is worn by the leader of the general classification on the Giro d’Italia, and is steeped in history. The Giro, or Tour of Italy, is considered to be “the world’s toughest race, in the world’s most beautiful place”. It is intensely and passionately supported by Italians to an almost nationalistic degree. No wonder then, that in the first 100 editions of the race, Italian riders have won it 69 times.

The History of Pink

The First Men in Pink

The early days of the Giro saw riders setting out in the middle of the night to cover stages over 300km long, tackling road surfaces that were barely suitable for horse and carts. Around the inception of the Pink Jersey, the man to beat was Alfredo Binda, who despite being Italian, was something of a public enemy.

In 1925, the Italian public turned on Binda, who at the age of 23 won the Giro in his first attempt, defeating the people’s champion Costante Girardengo in the process. That Giro was meant to be Girardengo’s swansong, but the defeat led him to reconsider his retirement, and a bitter rivalry with Binda was born.

By 1930, Alfredo Binda was so dominant, that he was offered 22,500 Lire to miss that year’s race; a sum of money that matched the general classification winner’s prize pot. Binda took the cash and entered the Le Tour de France instead. The following year, the Maglia Rosa was introduced, but Binda wouldn’t get his hands on it until 1933.

Italian dominance in the early years of the Giro would mean the rest of the world had to wait until 1950 before a foreigner pulled on La Maglia Rosa. That pleasure belonged to Swiss Rider Hugo Koblet, who also brought home the mountains classification jersey and two stage wins.

Three riders share the record of five general classification wins at the Giro. Fausto Coppi and Eddy Merckx both took home five pink jerseys each, but Alfredo Binda only took home one, with his first four victories coming before the inception of La Maglia Rosa.

Coppi was another Italian hero, whose success earned him the title ‘Il Campionissimo’, or the champion of champions. The complete post-war rider, he could do it all. Equally capable at climbing, sprinting and time trialing, and so he proved in 1952 when he became the first cyclist to win the Tour de France and Giro in the same year.

Eddy Merckx dominated the Giro in the early 1970’s, and having ridden an incredible 77 stages as leader of the race, he still holds the record for the most days spent wearing pink.

Between 1946 and 1951, Giro organisers also presented La Maglia Nera, or black jersey, to the rider who came last in the race. Perhaps surprisingly, this was a much-coveted honour, with Sante Carollo and Luigi Malabrocca developing a great rivalry in their quests to finish last. In a competition to see who could waste the most time, they could be found hiding in bars and cafés or behind hedges waiting for their rival to pass. They’d even go so far as to puncture their own tyres. The jersey was last awarded to Giovanni Pinarello in 1951, who has enjoyed much more success at the Giro with the bikes his company has produced since.

In 1960, French legend Jacques Anquetil won the Giro by just 20 seconds. Curiously, he kept a special bottle for the toughest climbs. It was allegedly full of cold tea with no milk, about which he commented “it’s so bad, I drink less, and ride better”. While hydration and nutritional tactics may have changed over the years, the pink jersey has been ever present.

Like the Giro itself, the honour of producing the pink jersey has been dominated by the Italians. A number of top Italian manufacturers have had the honour, including Santini in recent years. For 2018 that honour has been returned to Castelli, who last had their scorpion emblem adorned on La Maglia Rosa in 1992.

The roots of the Castelli brand stretch deeply into the history of the sport, dating back to 1930 when renowned Italian tailor Vittore Gianni began to experiment with sportswear. It was when Armando Castelli joined him in 1935 that Gianni turned the company’s attention to producing cyclewear for top professionals, becoming the label we know as Castelli in 1939, when Armando bought him out. It seems fitting that an Italian brand, so steeped in the history of the Giro, should be back at the helm, producing La Maglia Rosa again.

Pinarello, Colnago, and Bianchi are perhaps the three most iconic Italian road bike manufacturers, and have found their machines being used by the winners of many Giro d’Italia editions over the years.

Perhaps the most iconic bike in living memory belonged to none other than Marco Pantani. The unmistakable Bianchi Mega Pro XL was custom built by the Reparto Corse race shop to the exact specifications of the Italian climber and finished in the now iconic colours of the sponsor’s yellow (Mercatone Uno), and Bianchi’s infamous celeste. In 1998 Il Pirata rode it to glory in both the Giro d’Italia and Tour de France.

The Power of Pink

On the queen stage of the 2017 Giro, at the foot of the final climb, stomach cramps famously forced Tom Dumoulin to pull over and remove his pink jersey. With the general classification leader in a moment of desperate need, Ilnur Zakarin attacked, followed by Vincenzo Nibali and Nairo Quintana. With his 2 minute 41 second lead disappearing fast, Dumoulin remounted and chased as hard as he could; visibly suffering on the inside. Nibali took the stage, and the clock started ticking down, with many fearing that the Dutchman would lose the pink jersey in the most unfortunate manner. But perhaps it was La Maglia Rosa that gave Dumoulin the grit and determination to limit his losses to just over two minutes, win over the neutrals and hold on to the pink jersey all the way to Milan.

It remains to be seen who will wear the infamous Maglia Rosa in 2018, but we can be certain it will be a hotly contested Giro, flavoured by the passion and pride Italian cycling fans are famous for. 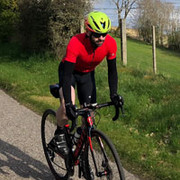