The most infamous race in the spring classics calendar, Paris-Roubaix is both celebrated and feared in equal measure. First run in 1896 in an era before the humble derailleur, this year's edition will be the 116th time the race has snaked the 260 kilometres to the normally sleepy Belgian border town of Roubaix. In this guide, we'll touch on the history, the contenders, and the kit that's going to get you to that velodrome should you decide to follow those cobbled roads north.

Everything about this queen of the classics seems to instil a greater sense of feat and awe. Roubaix is not merely a race, but an ordeal, a barometer and guide against which the rider can test their mettle. Whilst most of the spring classics dabble in the cobbled climbs, Paris-Roubaix dishes out 50km of cobbled racing across roads first laid for Napoleon's troops. Annually, sapping the rider of their motivation as well as their speed, the cobbles of Roubaix are always a testing ground for the hottest cycling talents. 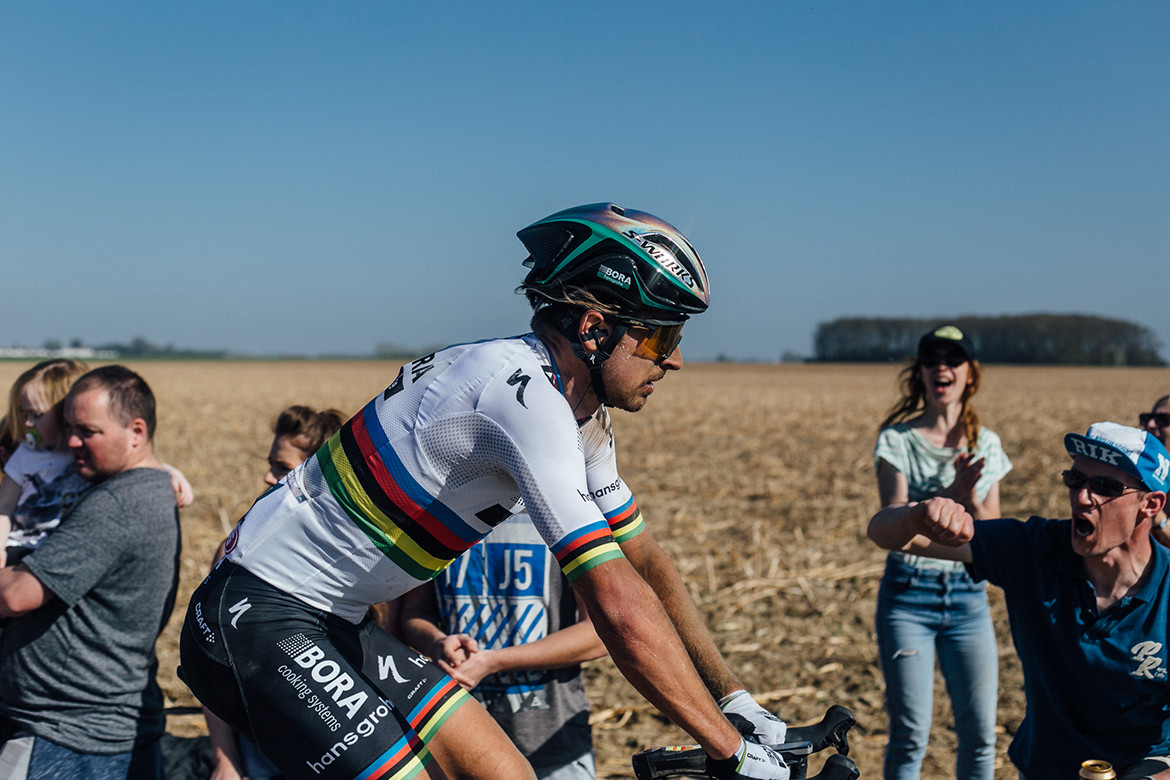 With the modern race setting out from the town of Compiègne 80km north of Paris, this route retains much of the grit and difficulties that the earliest riders encountered over 100 years ago. Typical of the classics, and as a one-day all or nothing push for the border with Belgium, this race suits the more powerful rider, capable of withstanding the wind and the battering of the cobbles.

So, who should you be watching for this year? Well, you can never discount Peter Sagan. A victory that has, up to now, eluded him, the three-time Slovak world champion will be looking to etch his name on the Roubaix shower wall. A rider with the skill to match his power, the 28-year-old will be supported by a strong Bora-Hansgrohe team. With form and focus, a first Paris-Roubaix win surely imminent.

A rider which caused Sagan a headache last year, Greg Van Avermaet will be looking to repeat his 2017 Roubaix win. After a slow start to his 2018 season, the Belgian will be looking to put bad luck behind him and take a second victory. 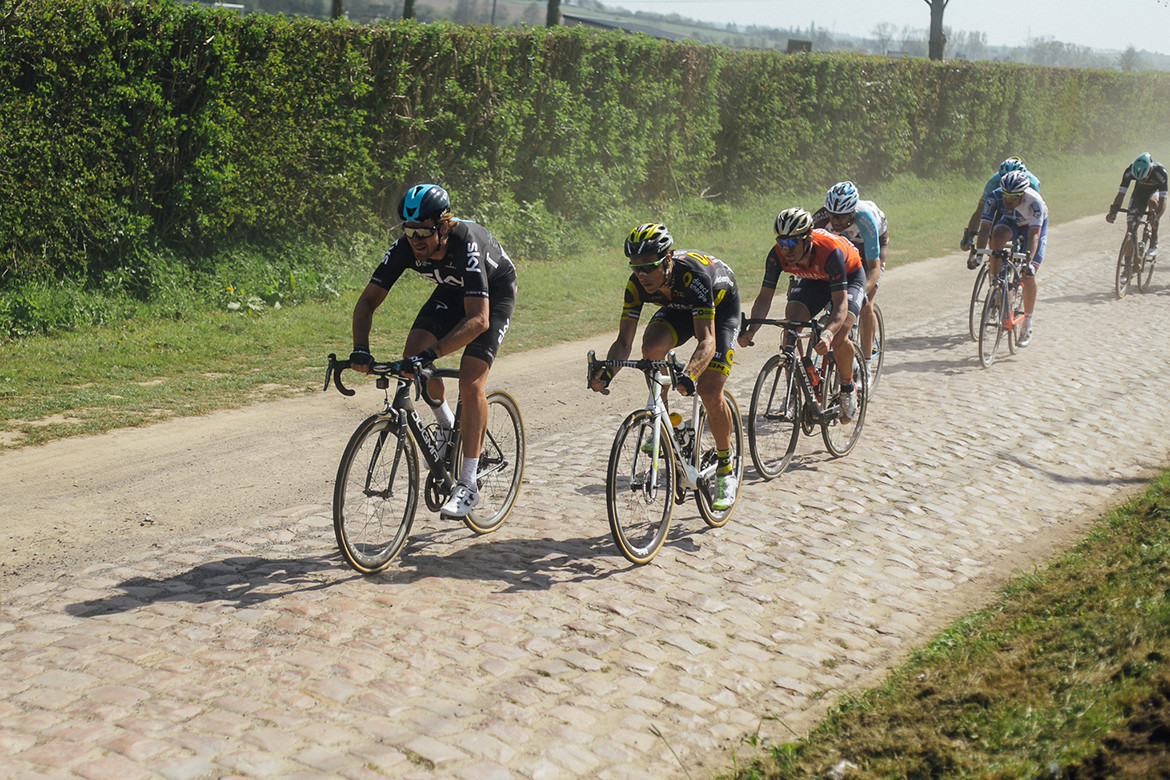 No list of contenders though could be complete without a rider from the masters of Paris-Roubaix, Quick-Step Floors. Having already taken multiple classic titles this year, fresh from the top step of the podium at the Tour of Flanders.

Aside from these stand-out riders, there are always a number of threats thrown into the mix, fighting for their place at the front and with form in recent weeks - our favourites? Certainly, 2018 has been a breakthrough year for Wout Van Aert. A cyclocross world champion, the Belgian will be looking to use his off road riding skills to good effect on the cobbles. Further bolstering the Belgian charge Sep Vanmarcke, should never be discounted when it comes to tough, gritty racing. German interest too hangs over the race, with its first ever winner, John Degenkolb, eager as ever to get onto the podium.

With a host of sponsors and pro-teams looking for every possible advantage to capture the win in Roubaix's velodrome, there's a race to improve and hone bikes to the unique conditions of the race. With pro-level equipment steadily filtering down to ambitious amateur riders keen to test themselves, there are a number of items that you should consider if you're allured by the challenge of the cobbles.

Keeping the wheels going round 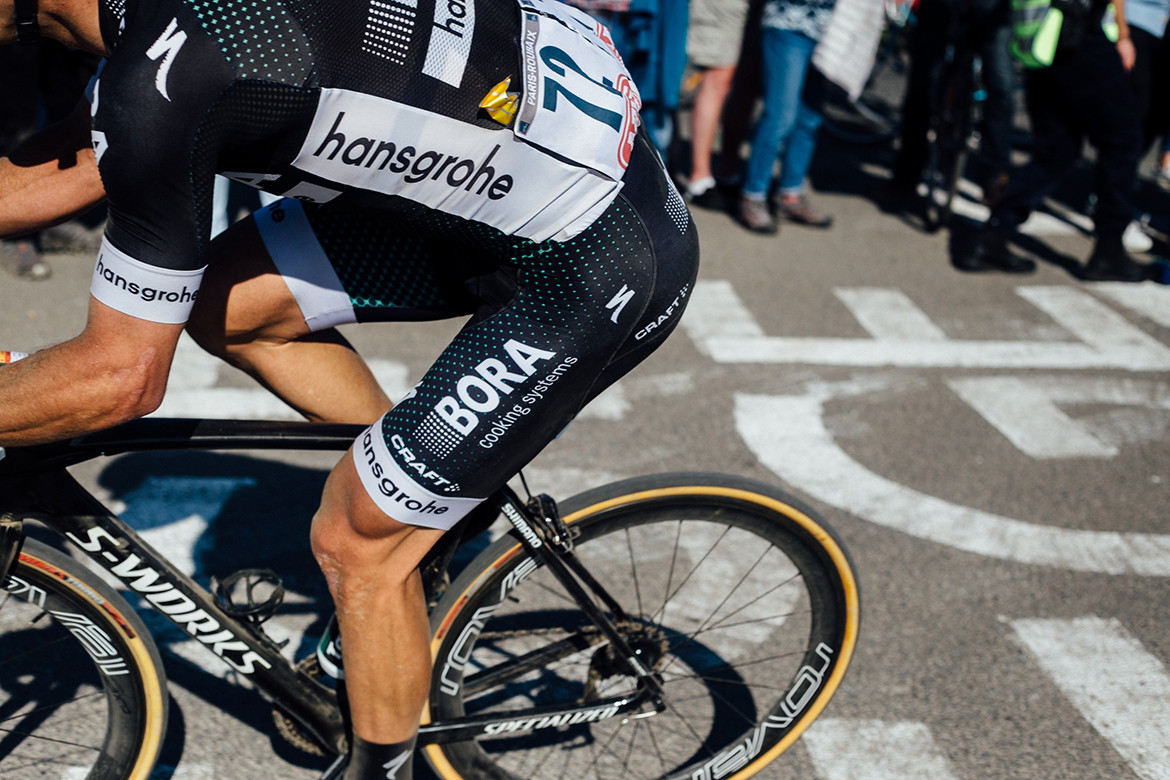 One of the key developments specifically for Paris-Roubaix has had to be wheel technology - with the almost obscenely rutted and worn cobbles each year putting a strain on spokes, hubs and rims, as they come in direct contact with the difficult sectors of pavé, steps had to be taken toward building better wheels.

As Paris-Roubaix is a typically French affair, it's no surprise that some of the best wheels for the job come virtue of Mavic. With the Mavic Ksyrium Pro Exalith Wheelset offering a supremely strong Maxtal alloy rim and carbon bodied hub, this is a solid option that can accommodate wider tyres commonly opted for by pros as they look to smooth out some of the bumps on the road. Remaining lightweight and with an aerodynamic profile to save energy on a one-day epic ride, these wheels offer bombproof construction and proven quality, meaning you'll get to Roubaix without your wheels resembling the shape of the velodrome.

Comfort through the wheels though is worth little if the basis of your bike isn't up to the specific demands that the terrain throws its way. Well, Specialized were keen to make sure they catered specifically for the rider taking the road north. With the Specialized Roubaix range of road bikes they've created a machine that's designed specifically for tackling rough and rugged road conditions. Integrating a Future Shock style suspension that sees a piston in the head tube providing 20mm of travel, this bike offers front end comfort that prevents shocks shooting into your arms, leaving you sore and stiff.

Equipping the seatpost too with this suspension concept, this bike is supplied with a Specialized CG-R, FACT carbon base that integrates 18mm of vertical compliance by means of a Zertz vibration dampening feature, making your ride smoother without compromising stiffness and rigidity in the actual drivetrain.

Combining comfort with what is otherwise an entirely performance-based road specification, this bike is sure to boost and reinforce your efforts as you point your handlebars down that paved sector.

Saddling up against the shocks 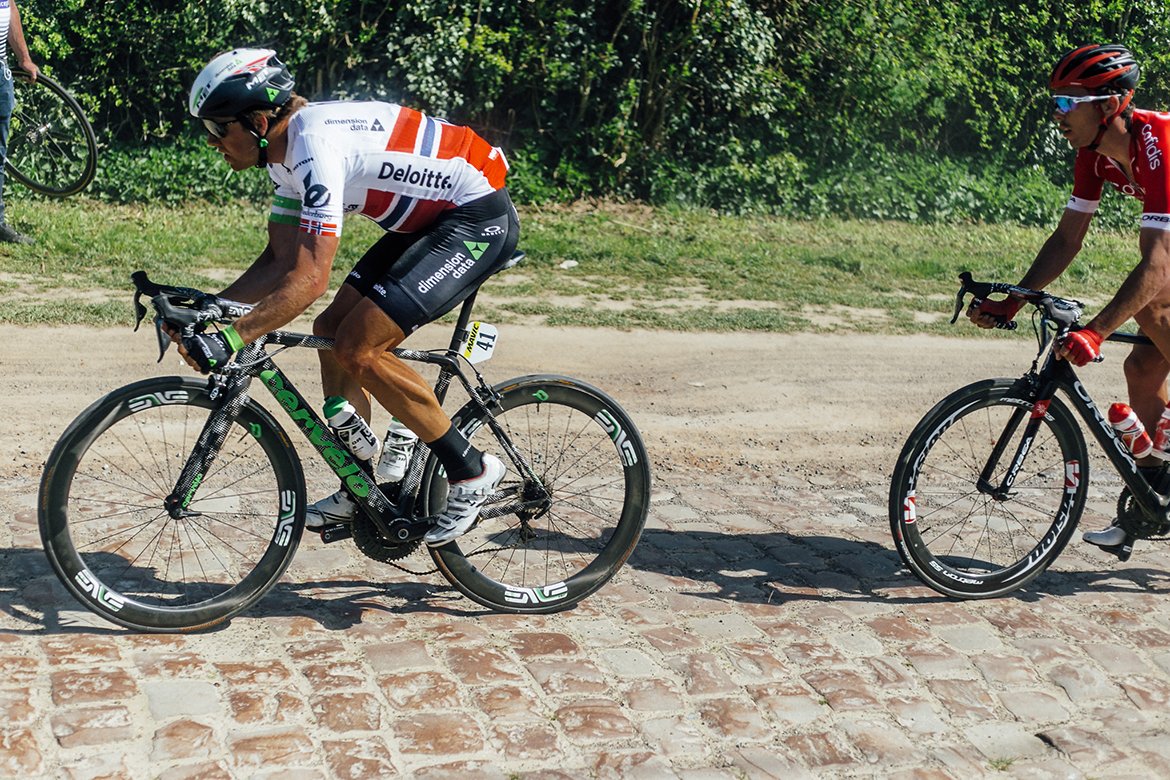 Now, any rider worth their salt knows that a good bib short and saddle combo is enough to soften the severity of even the worst maintained road, and with the upkeep of the Roubaix cobbles specifically designated to a group that works hard to ensure they remain equally unrideable but sufficiently passable, your choices are critical in getting you the full distance.

Saddle comfort can be the difference between a joyful and a painful ride. The Fizik Aliante R3 Open Saddle is a close match to the undulating and arduous paved 'secteur'. Light at 215 grams and with a carbon composite shell presenting any loss through flex, this saddle uses specially shaped rails and a Twin Flex composition to reduce vibration transfer from the bike whilst ensuring that your power isn't nulled on the long, windy road sections.

The bib short to sit upon this saddle? Sportful's Fiandre Light NoRain Bib Short is a favoured option due to its lightweight fabric composition allowing for that spring feeling, and a NoRain coating ensuring that the rainswept fields of Northern France don't put bay to your ambitions of making it to the border.

Jersey choice is key for riding Paris-Roubaix. With spring weather proving capricious and temperamental, it's best to opt for something protective yet highly breathable.

Our choice for Roubaix? The Castelli Perfetto Light Short Sleeve Jersey blends the precise level of water resistance and windproof protection required for racing in the rain with superlative ventilation prospects. Durable and breathable, if the weather turns sour, we're sure that this is one jersey that you'll spot out there on race day. 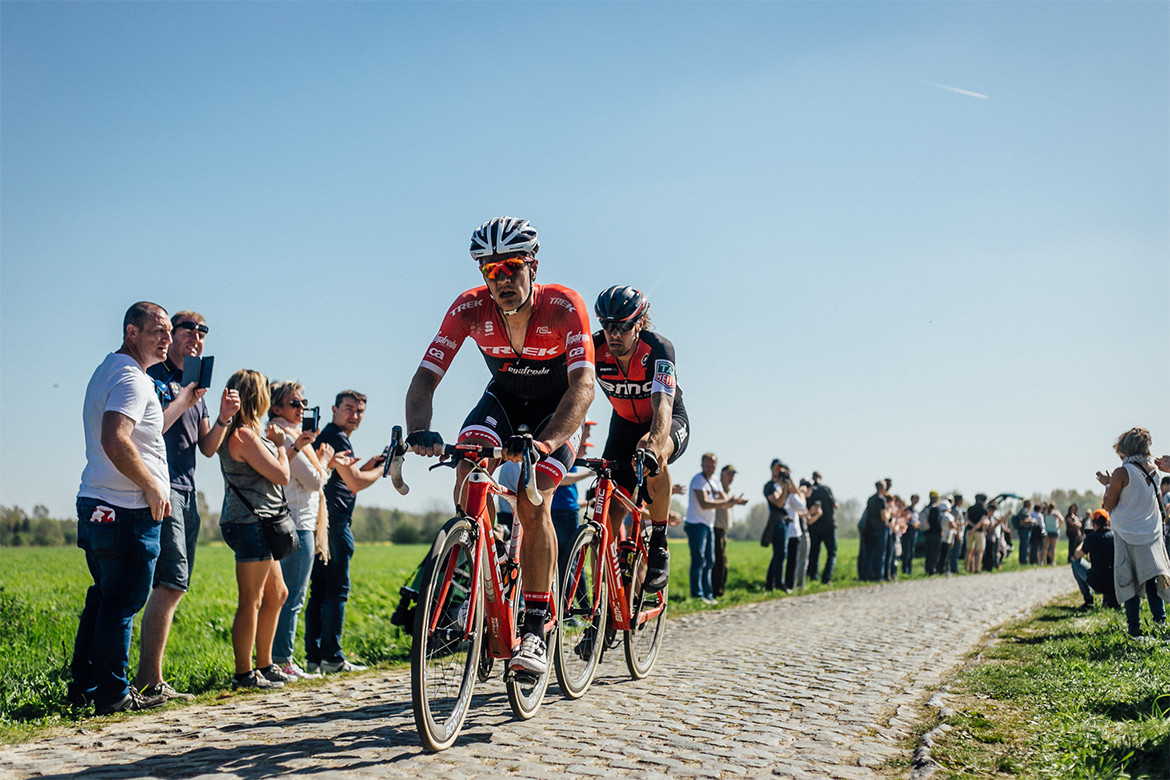 Sometimes, though, big differences come from the smallest of changes, and, there are some simple modifications almost anyone can make to ensure that their ride is made as easy as possible. Perhaps the biggest one? That would be bar tape. It sounds trivial, but perhaps the thing you'll see a pro-mechanic doing most often is wrapping and re-wrapping handlebars in fresh, pristine tape. With this in mind, the Specialized S-Wrap Roubaix Bar Tape is a prime candidate for battling cobble wobbling. A redoubled thickness and elastomer backing combine to enhance for vibration-dampening properties, this bar tape is brilliant at eliminating road buzz, and taking some of the impact out of tackling cobbled sections at pace.

Comfort, though, is often unseen, and another top tip that shouldn't escape any rider targeting a finish in that world-famous velodrome would have to be ASSOS' Chamois Cream. With a mammoth day in the saddle ahead of you, you'll do well to make sure that there's no resistance that comes between you and completing your goal.

And, finally, with the prospect of one of the grimiest, toughest and roughest days on the calendar, keeping your shoes clean and feet dry is a must. The Velotoze Tall Shoe Cover, as well as providing protection, also offers aerodynamic benefits, further improving your efficiency on a day that really requires you to save every ounce of energy.

Final lap of the Velodrome 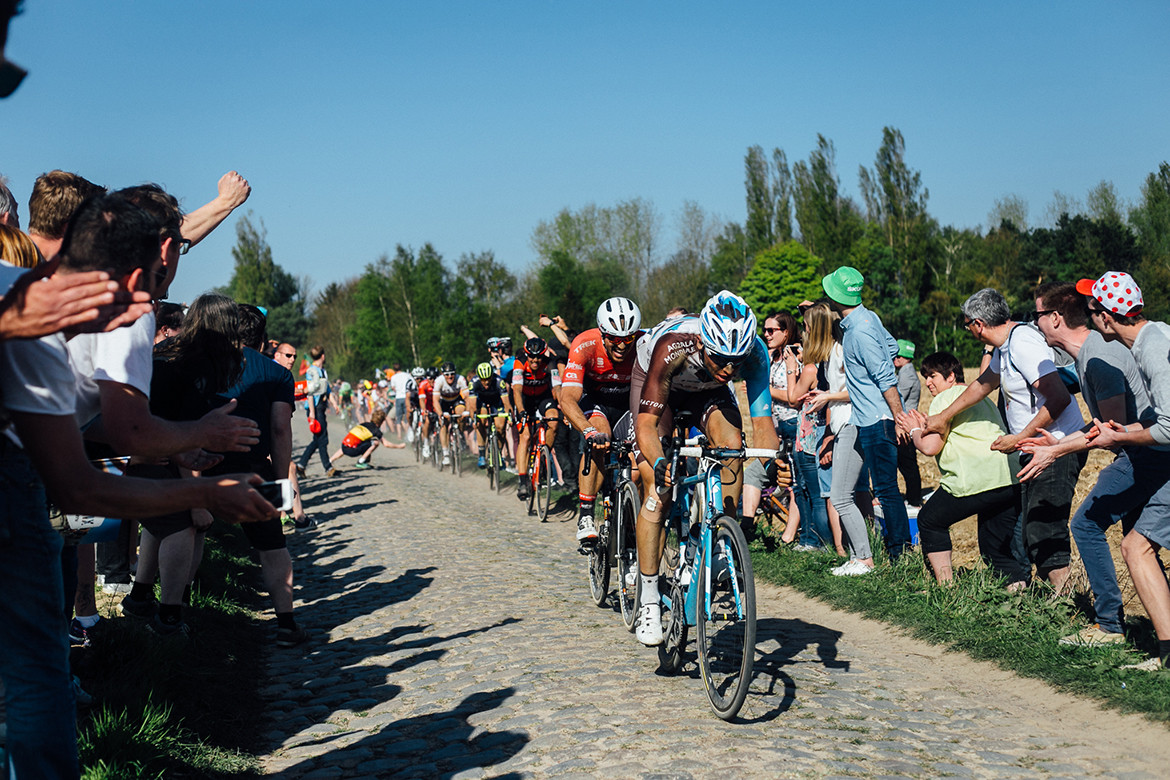 So, as we eagerly await that famed and hotly anticipated final lap, we're keen not only to see which rider makes that final turn into the velodrome, but also, to inspect their setup, and analyse just what helped power them to victory, because it's more than likely that we'll be seeing it in the not too distant future.

If you're eyeing up a kit list for an encounter with the cobbles, then we hope that this list will give you some inspiration and pointers on where you should be looking to find that last ounce of power to make your ride a triumph.