As a true modern classic of road bike design, we took an in-depth look at the Pinarello Dogma F8 to see what separates it from the chasing pack. 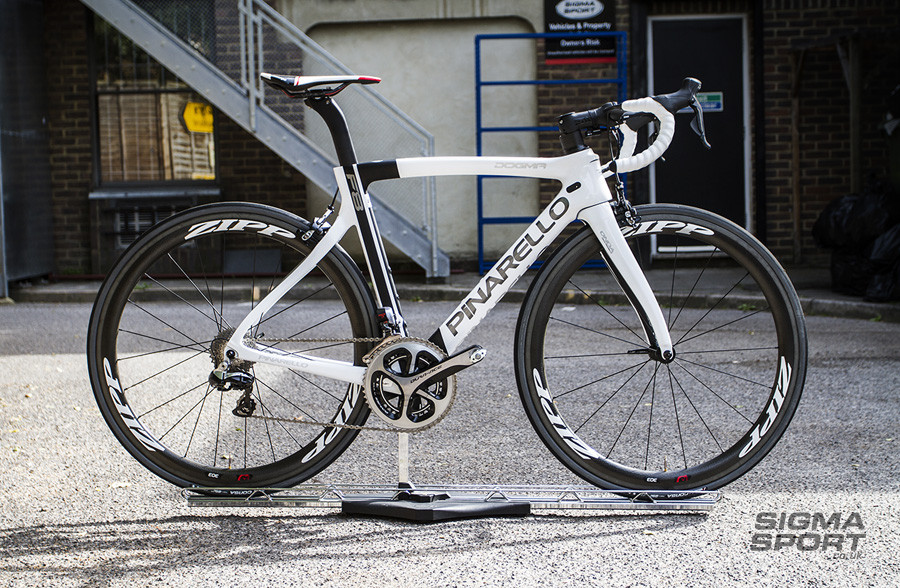 When you address every aspect of a bike and redevelop the individual components, you’re bound to find some marginal gains. But what if you recruit Dimitris Katsanis, the man who redesigned the world’s most illustrious aerodynamic bike; the Team GB Olympic track bike, and instate him as head of your product development? Well, that’s what Pinarello have done with the Dogma F8 and the results are truly stunning.

All of these impressive statistics prove just how much of a complete bike the Pinarello Dogma F8 is. The question remains, how did the world heavyweights of Pinarello, Jaguar, Team Sky and Dimitris Katsanis fine tune the Dogma, already a back-to-back Tour de France-winning bike, to become a market leading high-performance road machine?

"The same carbon fibre used to fly the modern giant of the skies is now used in the Dogma F8 to make you fly on the road." 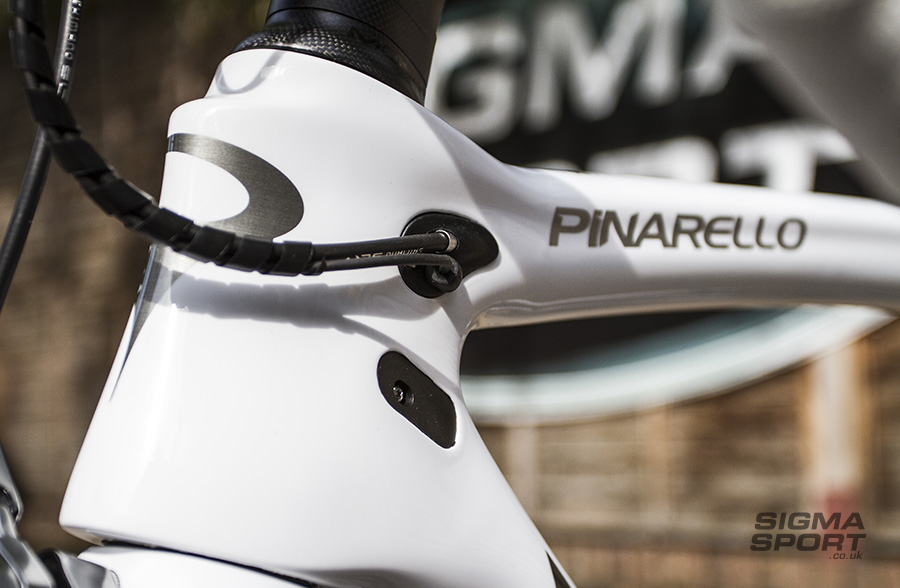 Weighing only 860g, the Dogma F8 is 120g lighter than its predecessor, the Dogma 65.1 yet through rigorous testing has proven it’s actually stiffer and more responsive. Not only does it provide an incredible stiffness to weight ratio but the T1100 1K Dream Carbon is specifically designed for Pinarello, making it the only bike brand in the world to use this material.

Using a lightweight, strong material is only the start and Pinarello understand how important aerodynamics are when travelling at high speeds.

"The frame and fork represent approximately 15% of the total aerodynamic impact of a cyclist riding his bicycle..."

Tube shaping was the next step in reducing drag, and that’s exactly what the new tube cross-section FlatBack was designed for. UCI regulations state a maximum aero profile ratio of 3:1 in road racing bicycles, whilst TT bikes are allowed an 8:1 ratio - which is significantly more aerodynamic. To counter this, Jaguar stepped into the partnership with their top-of-the-line wind tunnel.

Applying the same aerodynamic profile of an 8:1 tube within a 3:1 tube is incredibly difficult, but with Flatback technology, the Dogma is able to reduce the turbulence created from oval tubing by flattening the rear section of the tube. 70 configurations and 300 Computational Fluid Dynamics (CFD) Analyses later and the Jaguar-Pinarello partnership reduced aerodynamic impact by 47%, whilst also improving strength and rigidity by 12% - all without adding any weight.

Every Pinarello bicycle is conceived from the same unwavering thought: Think Asymmetric- That is Pinarello's design philosophy. Because the drivetrain of a bicycle is asymmetric, the frame needs to be asymmetric to balance the force that is applied to the drive side.

The frame does set it apart, but Pinarello has not stopped there. Using the same characteristics that Katsanis used in both the Argon Olympic bike and the Bolide fork that dominated the 2012 Tour de France time trials, the Onda F8 fork has an optimised surface profile that reduces drag by 54% compared to the Onda 2 fork. 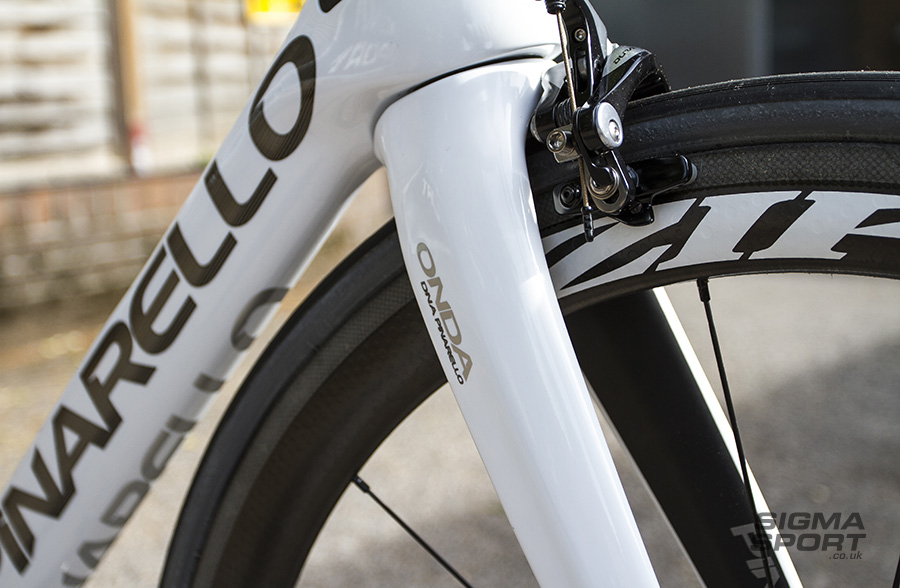 A 54% drag reduction is impressive, but the F8 fork has been derived from the Bolide, so does it perform the same? According to the graphs, yes. The F8 fork legs act as sails that promote forward motion in crosswind conditions, and in stronger winds, this effect is amplified.

Even the most minute of adjustments can produce marginal gains and that’s exactly the philosophy Pinarello used when addressing the joint between frame, fork and component. Yes, the frame and fork are out of this world in terms of weight, stiffness and efficiency but how can this be extended into the componentry?

Seamlessly integrating the external components into the frame, as if they were built as one piece together, was the idea brought to the table by the mixture of market leaders. By moving component joins into the frame, the air is able to flow around the tube, stopping it getting trapped within bulky joints that create an adverse drag effect to the detriment of the rest of the bike's aerodynamics.

This approach is evident in the ONDA F8 fork, which integrates with the down tube to minimise turbulence and aerodynamic impact. Pinarello’s THINK2 system also uses this system to its advantage by hiding any cables and batteries within the frame, whether that be mechanical or electronic, to reduce drag.

Whereas other manufacturers leave routing ports open when choosing between electronic and mechanical, which can have a severe impact on keeping the entire bike streamlined, the DOGMA F8 provides the appropriate covers to keep the rider powering on without any energy loss. 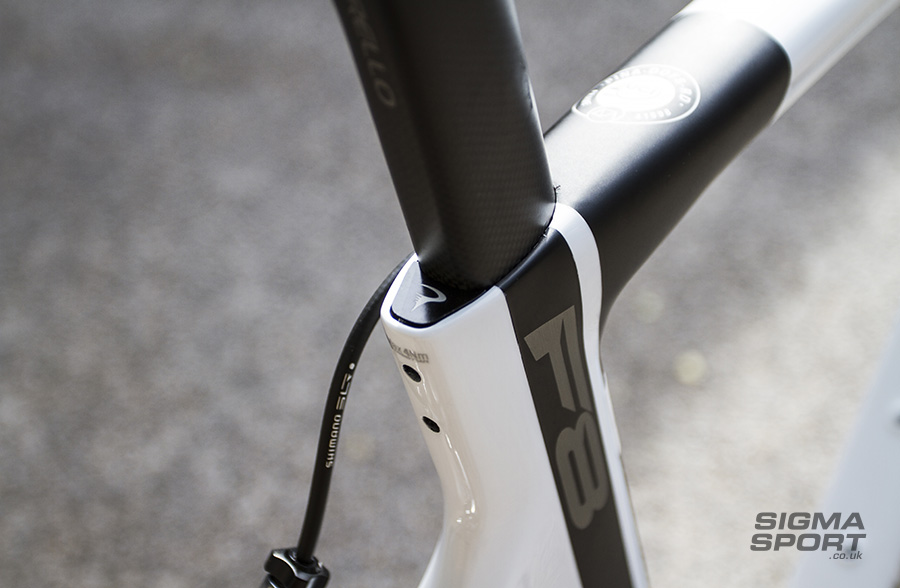 Seamless integration is also used within the new and improved TwinForce seat clamp. TwinForce technology does away with traditional seat post clamps and instead uses a frame-seat collar hidden within the downtube to reduce drag. 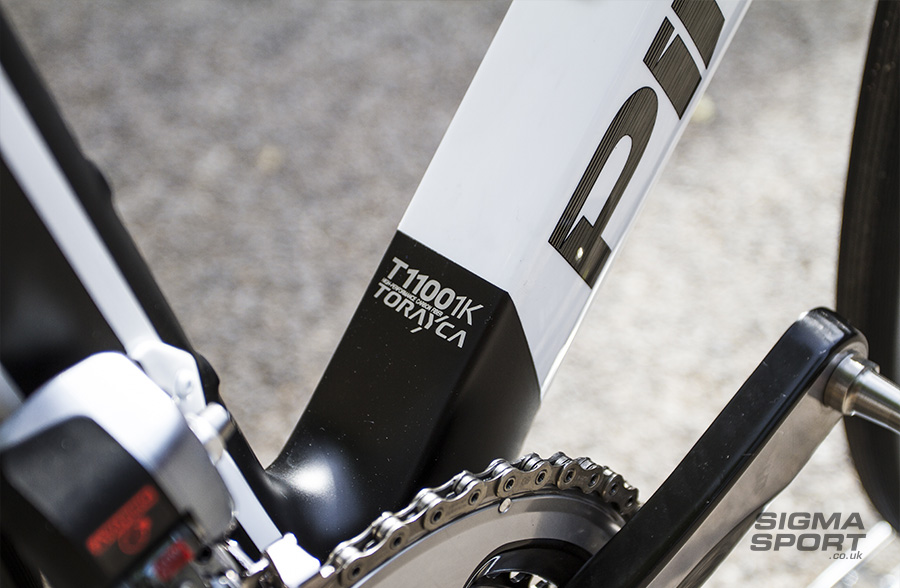 Adding to this frames versatility, the Dogma F8 comes with a removal front derailleur support - perfect for riders who want a bike that can do it all. Removing the front derailleur for time trialing can both drastically reduce weight and aerodynamic impact, making for an even higher performing bike in time-based events.

Ensuring that all riders, regardless of stature and racing experience, are able to exploit the Pinarello advantage, Pinarello have developed 13 different sizes to choose from. Each frame size is specifically developed in proportion to the size of the rider with individual geometry and a unique composite structure in each. "A 62m frame, for example, needs additional strength in critical areas; conversely, a 42cm, being very small, can be built using less material because its geometry and size make it inherently stronger,” Pinarello state. 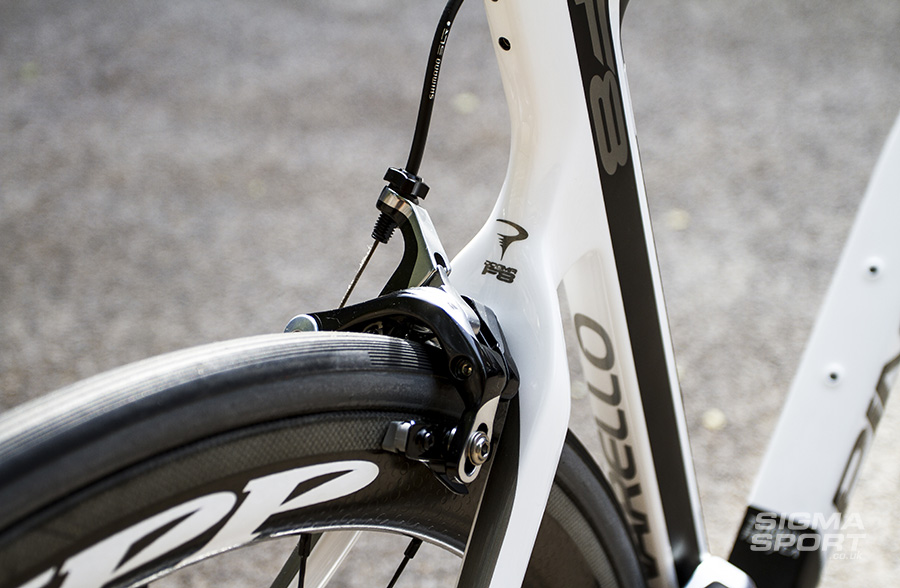 All-in-all, the Dogma F8 has skyrocketed itself into the world of superbike stardom, taking huge wins in the world of the pro-peloton. The tremendous levels of research both in and out of the wind tunnel transfers into real life situations, pushing the bike to the limit of what is possible on a road bike, whilst all the tiny developments add up to one major advantage. If there’s one bike you should pin your eyes on for pro-level performance and an undeniable advantage, it’s the Pinarello Dogma F8.