The Look Marmotte Granfondo Alps is one of Europe’s largest and longest running gran fondo’s. First conceived in 1982 and despite having almost 7000 places available, entries sell out incredibly quickly every year. Based in the heart of the relentlessly picturesque Rhone Alps area of France, the gran fondo starts near the bottom of the famed Alpe D’Huez climb, in Bourg d’Oisans and finishes at the summit of Alpe D’Huez after a gruelling day in the saddle.

Before you reach the Alpe, there are a further 3 HC (Hors Categorie, meaning beyond categorisation, or very, very hard) climbs to be tackled, totalling a leg-numbing 5000 metres of vertical ascent over 174km. Needless to say, it is a very challenging day and should be treated with respect, although the feeling of rounding the last of the 21 hairpins of cycling’s most famous climb is worth every ounce of suffering along the way.

Tom is a member of our in store sales team and for 2017 took part in his second Look Marmotte Granfondo Alps. Read on to find out how he got on as he took on some of cycling's most iconic climbs. 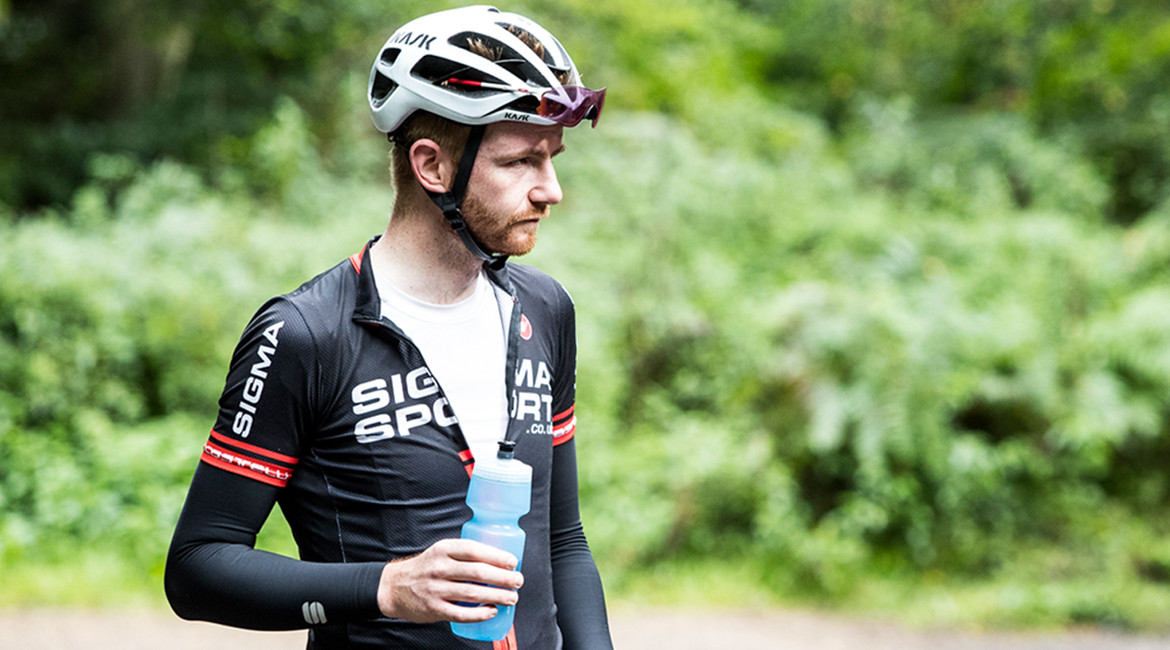 After finishing in a fairly respectable 6 hours 45 minutes the previous year, I came in with a lot more confidence this year, as I knew the route, had focussed a lot more on my training and had been using a power meter with guidance from a much more experienced friend. There was only one thing that was playing on the minds of my friend and I before the event, which was that the weather forecast was showing a rather brisk 1°C at the top of the climbs. The weather in the mountains is notoriously inclement and even if it is a beautiful sunny day on the valley floor it can be a vastly different story 2500 metres up. 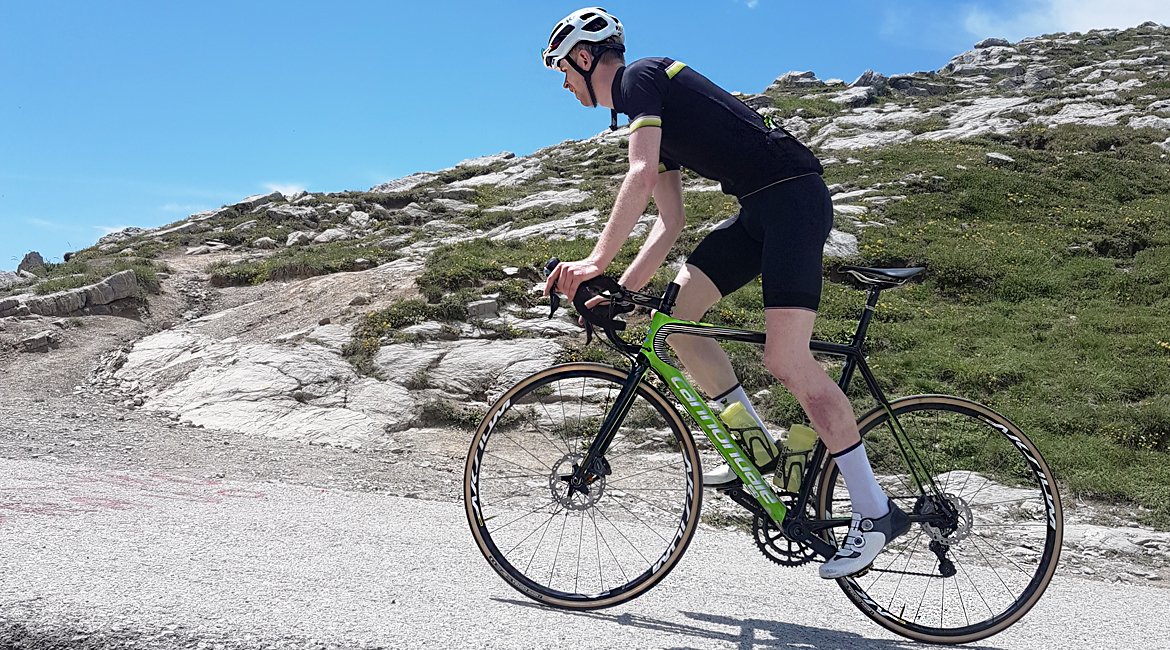 The day of the event this year was to be one of those days, which inevitably meant many hours of thought and discussion on the correct amount of kit to bring and the knowledge that you would still almost certainly get it wrong somehow!

My friend and I would be riding together (until the first climb at least, as he is considerably faster). We were due to be leaving in the first wave at 7am, so after an early start and as much breakfast as I could force myself to eat at that hour, we gently rode the 10 kilometres from our B&B to the start line. We arrived a lot earlier than we had planned and found ourselves at the very front of what would be around 7000 riders! After 40 minutes or so of trying to keep warm, we finally set off on what would prove to be an incredibly tough ride... 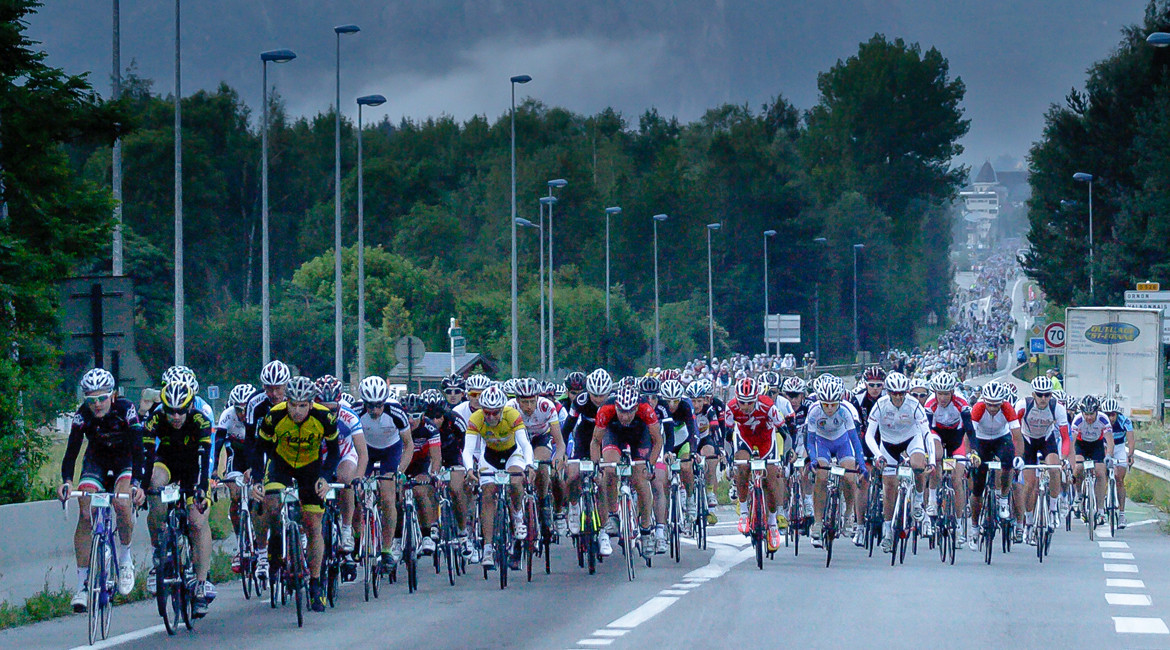 The first 10 kilometres are either flat or slightly downhill and the pace was quite frenetic, as the people who fancied themselves for fast times fought their way to the front of the bunch. In similar events to this I have seen some very questionable riding at the start, but the bunch on this day was quite well behaved; the knowledge of what was ahead may have helped with this.

The fast approach to the Glandon can easily leave you feeling a bit over-excited and the risk of going too hard at the first hurdle is a very real one. Even being aware of this didn’t stop me from falling into that trap, as I tried to hold onto the wheel of people half my size. I am a fairly heavy cyclist, certainly too big to ever be described as a climber, but I sometimes, to my own detriment, find it hard to accept the fact that gravity and power to weight ratios really do have an effect in this kind of situation. 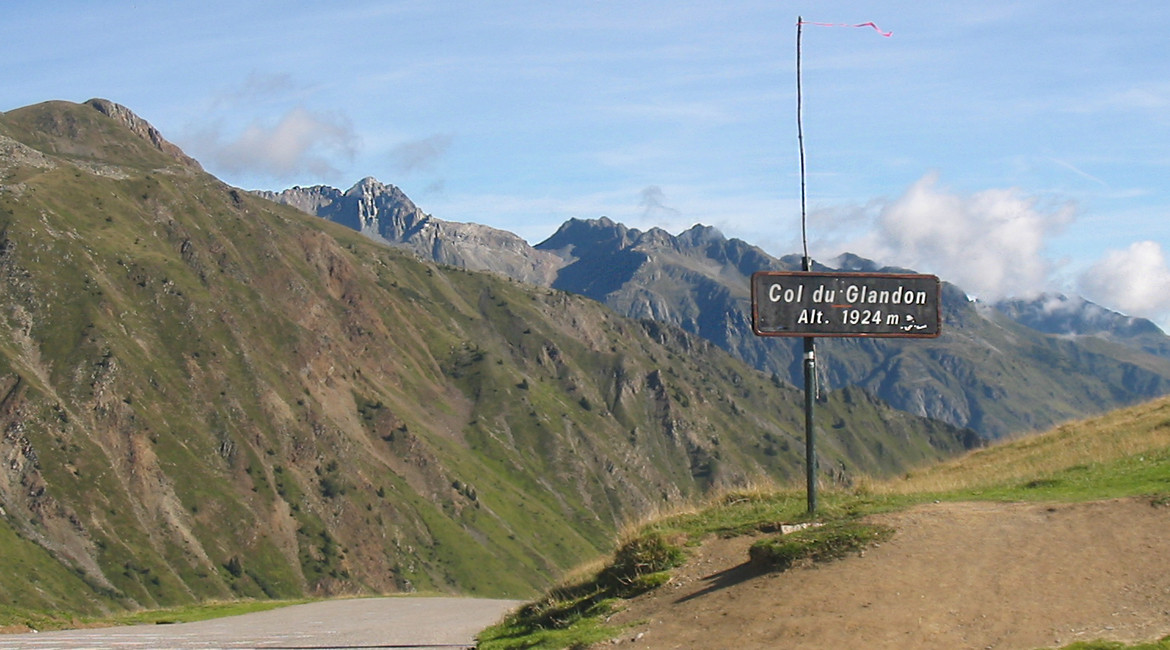 The Glandon is just under 27km long. Starting from the dam, the climb has an average gradient of 4.4%, however there are a couple of descents along the way which hide the true gradient. The gradient is fairly steady for most of the ascent, usually around 6-8%, but occasionally levelling out for some very welcome recovery, or pitching upwards and forcing you to inject a little more power through the pedals. The climb took me a little over an hour to complete at a fairly good pace. At the top I found the temperature had dropped to just a couple of degrees over freezing and there was a fierce chill to the wind, so I quickly pulled a rain cape on and started on my way down the descent as quickly as possible. The descent is neutralised every year as a safety precaution as it is very fast and technical, with narrow roads and tight switchbacks. If you are a comfortable descender it is amazingly fun, but if you are less confident it is best to take it easy, knowing that your time will be unaffected no matter your speed. 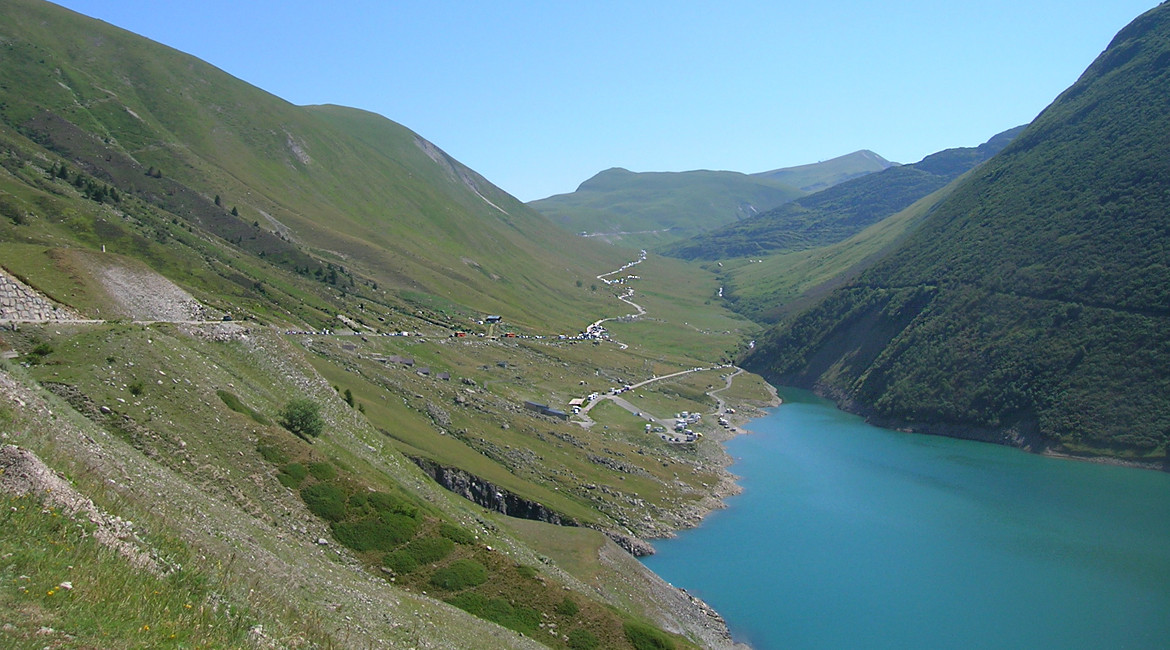 Once you reach the bottom of the Glandon there is a long stretch on a valley road which is relatively flat, considering you are in the middle of the French Alps. Here I was lucky enough to find a fairly fast group with plenty of people willing to press on towards the next climb.

The Telegraphe is my favourite climb of the Look Marmotte Granfondo Alps, which may have something to do with the fact that it is the easiest (or least difficult!). The climb is 12 kilometres in length and rises at a steady 7% through the gradually thinning trees. By the time I reached the top I had over 100km in my legs already and the fatigue was kicking in, which was especially unfortunate given what was still to come. 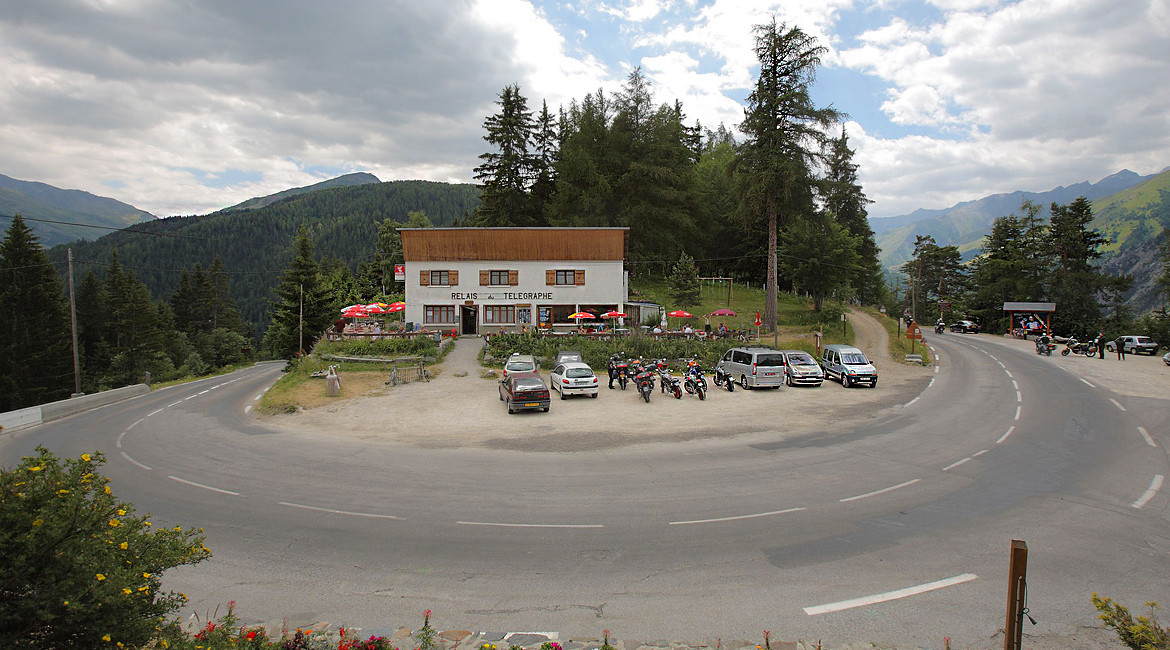 The Galibier is very cruel and very beautiful at the same time. The climb is 17 kilometres long at just under 7%, but after 4 kilometres at barely 3% it becomes apparent that the overall gradient is a deceitful and misleading number. The really cruel section of the Galibier is the final 3 kilometres, when your legs are already screaming at you and you are well over 2000m up. 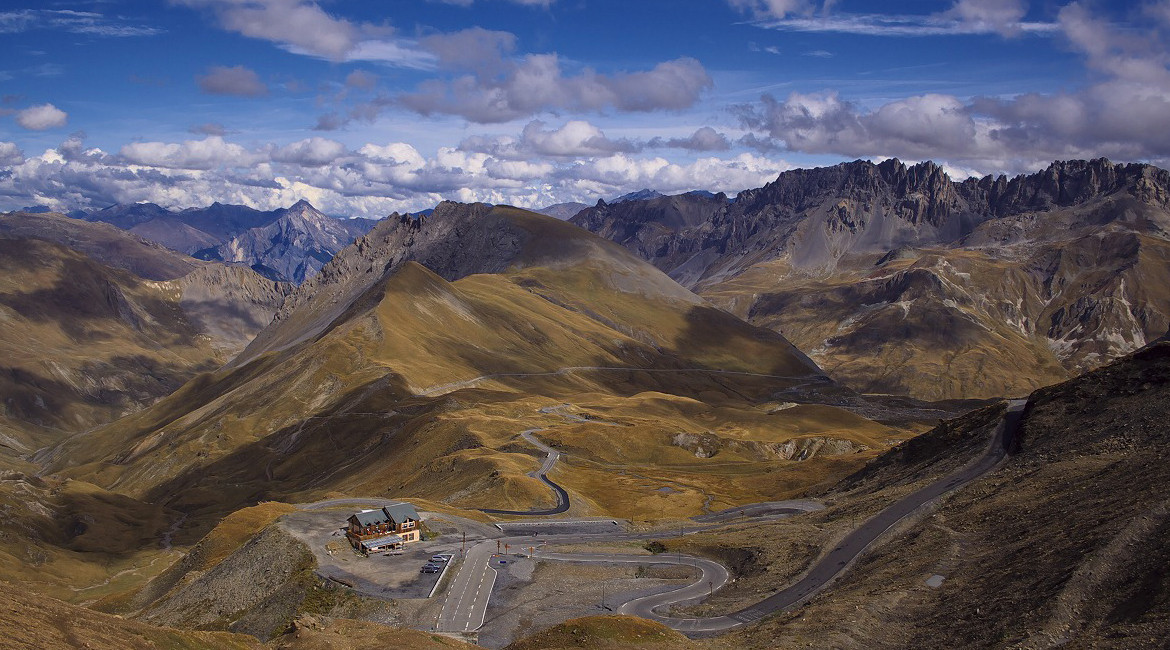 At this point the altitude is having an effect on your breathing and you also have to tackle by far the steepest section of the mountain, averaging over 10%. The Galibier is a truly brutal climb, but the scenery and the wild, desolate nature of the col is something to behold. If it wasn’t for the dozens of other cyclists around you it would really feel as though you are in the middle of nowhere on a road that doesn’t seem as though it could lead anywhere. 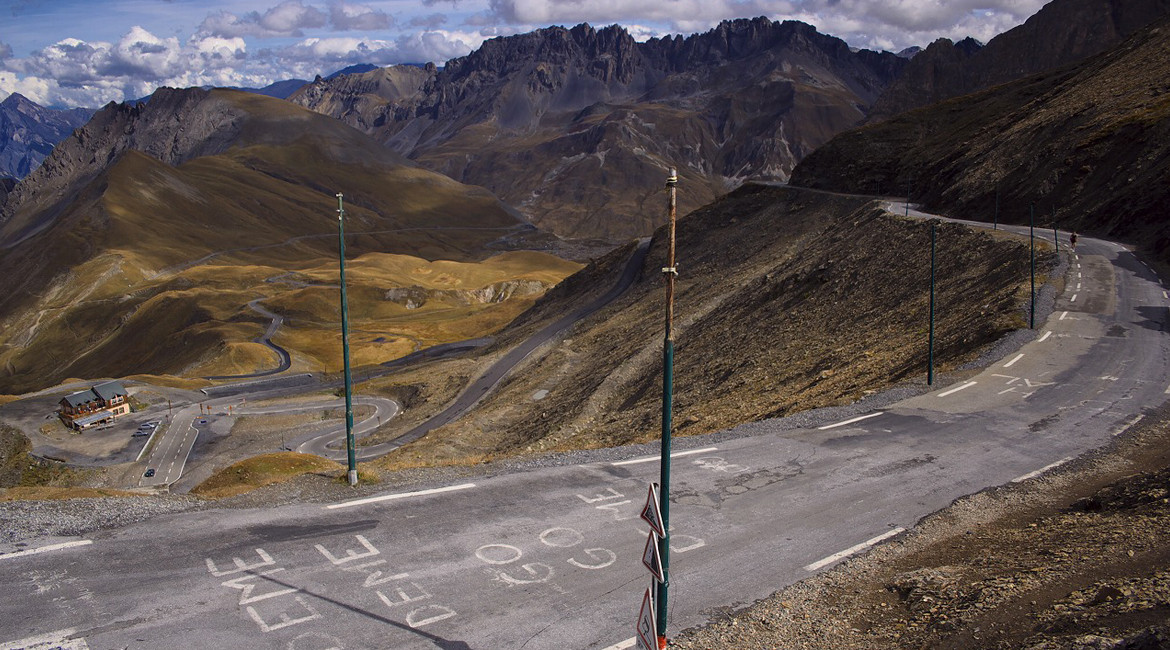 The weather at the top of the climb was very forbidding and I have a massive amount of respect for the people who manned the feed stations all day; factoring in wind chill, the temperature was below freezing and the wind was constant and ferocious. I quickly jumped off the bike and stuffed as many sweets into my mouth as I could and downed a couple of cups of coke as I was really starting to fade, the best cure for which is of course lots of sugar. 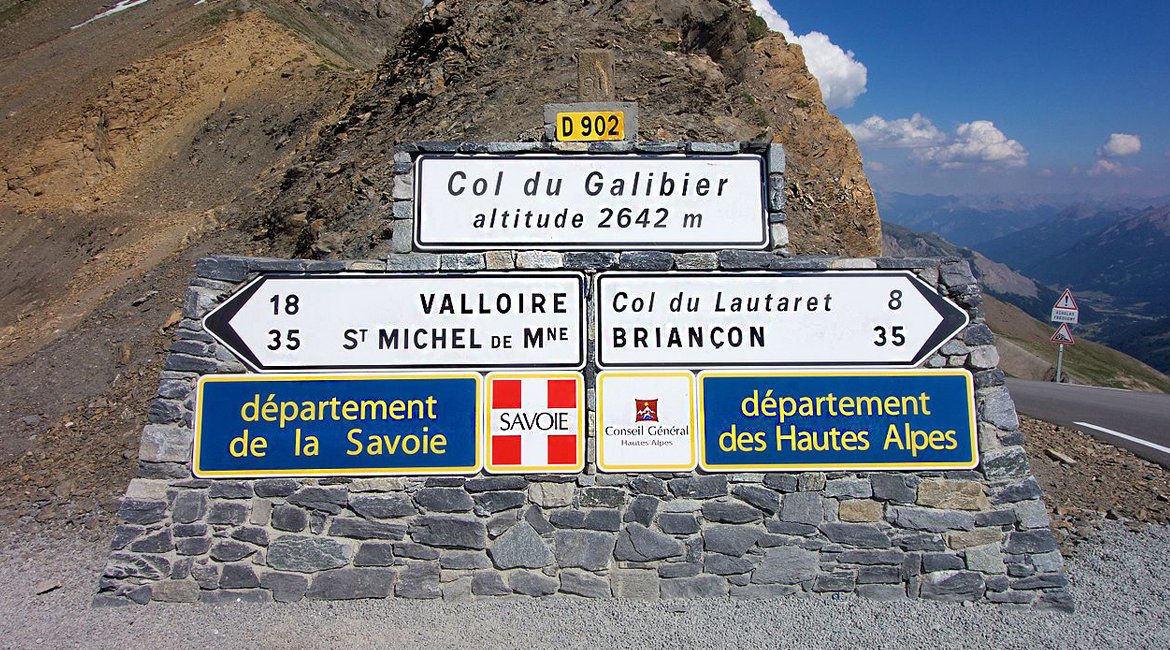 I should have taken gloves! The descent from the Galibier was freezing and I could not stop shaking, nor could I feel my hands. The wind was still blowing with some force so I just held on tight and tried to make my way down as quickly as possible. On a nicer day, the Galibier descent is one of the most enjoyable I have ever done, with wide open, fast switchbacks and incredible views of the road ahead.

The distance from the top of the Galibier to the bottom of the final climb of the day is a substantial 45 kilometres of almost constant downhill. The first 15 kilometres or so are fast and somewhat technical, but after that there are long sections of straight road with a very gentle gradient, the kind of roads where you can sit behind people and not have to put power through your pedals for minutes at a time. This is something I took full advantage of and would absolutely recommend if it is possible! There are a few small uphill kicks to tackle before the final valley road back to Bourg d’Oisans and the final challenge of the day.

The most talked about and famous climb in cycling is the last obstacle before you finish the Look Marmotte Granfondo Alps and as you might expect from a mountain of its stature, it is far from easy. It starts steep, averaging slightly over 10% for the first 4 kilometres, which at this point in the day might as well have been 25% for me, as I had already left it all out on the road, - slightly prematurely, as there were still 1000 metres of climbing remaining! 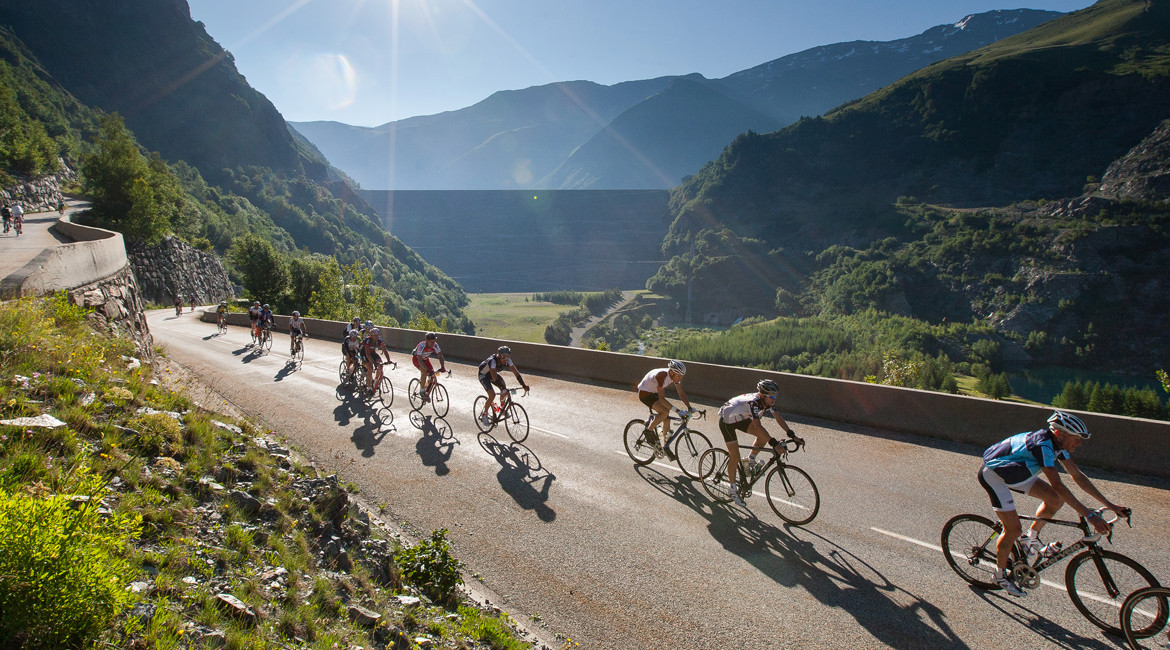 In this situation there is little else to do but shift into your easiest gear and just keep pedalling and counting down the switchbacks. The views out over Bourg d’Oisans on the way up are spectacular and, on this day, the clouds had finally started to break, allowing dappled sunlight to shine down on the vistas. There were huge crowds of locals and the families of riders along the way, all shouting much needed encouragement and handing out drinks, which really helped with my rapidly declining morale. Towards the top of the climb, the road mercifully eases to a much more manageable gradient as you near the town of Huez at the top of the climb. Once I arrived at the finish, I breathed a massive sigh of relief and slumped down on the concrete floor which at the time felt like the most comfortable armchair I had ever sat on. 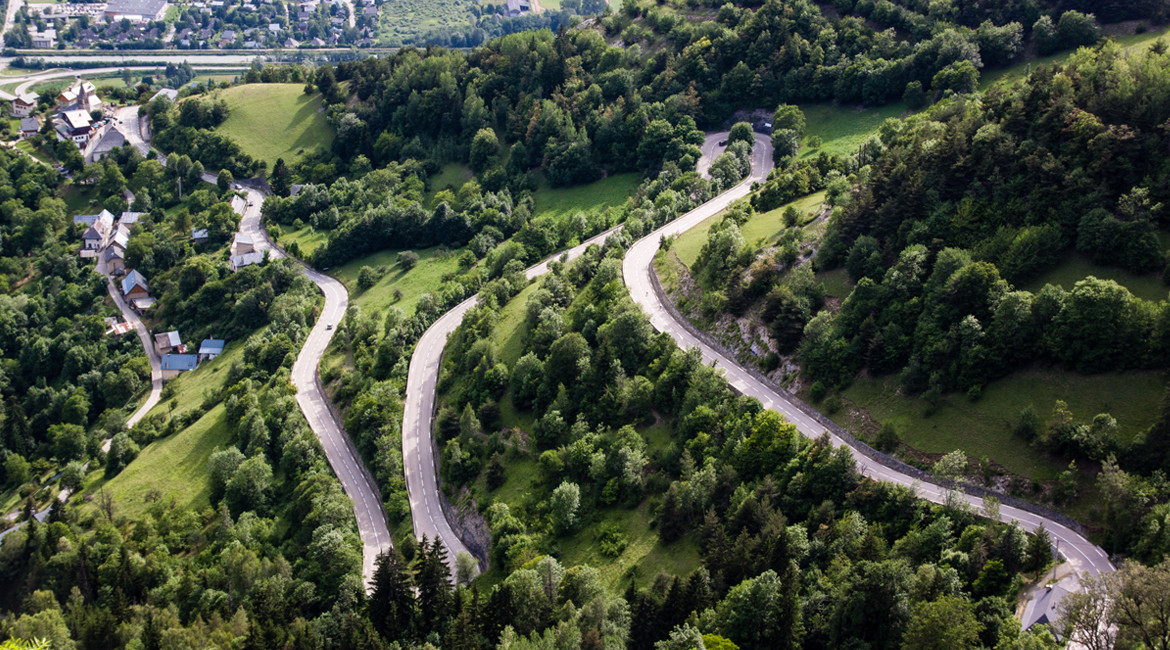 I finished the day at 7 hours to the minute, slightly slower than the previous year, but given the conditions and the fact that I managed to completely forget the concept of pacing, I was happy with the time and over the moon with the stuffed marmotte toy I was given at the end. I rode the Fausto Coppi Gran Fondo in Italy a week later, which is a fairly similar course in terms of length and elevation gain, and did a much better job of pacing myself and enjoyed the day much more because of it! 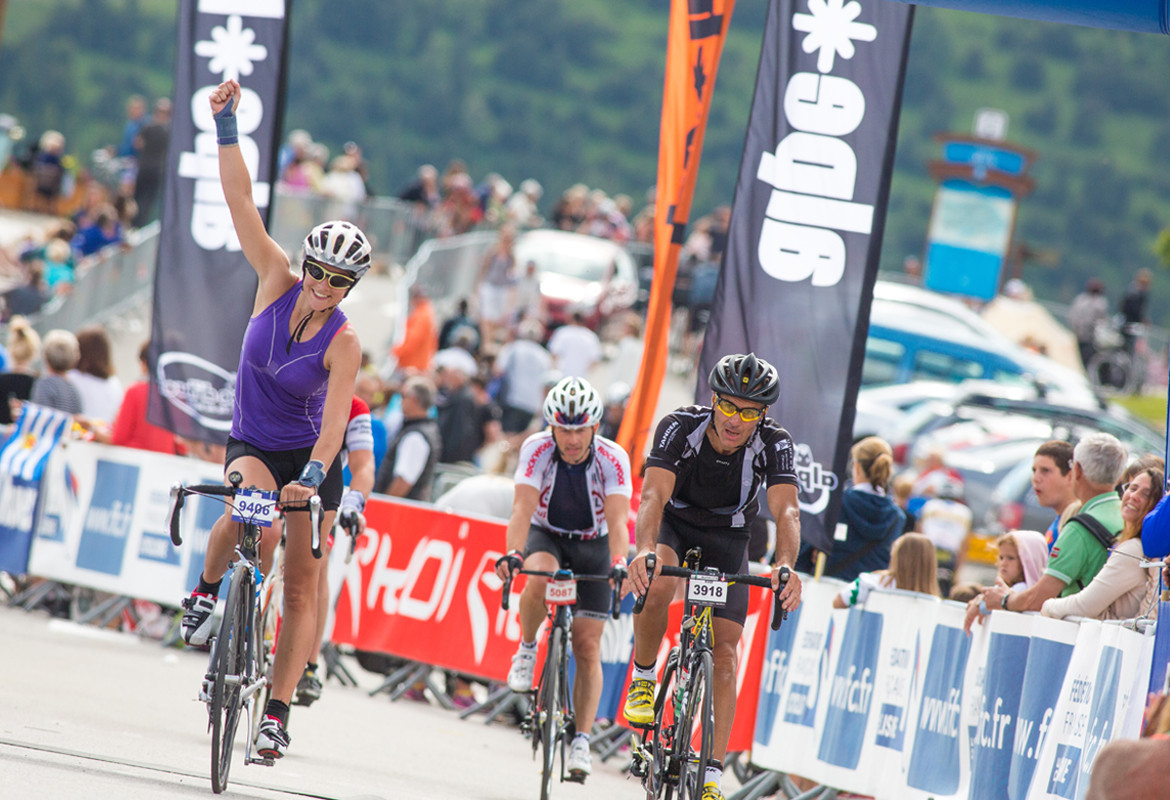 If you are planning on tackling the Look Marmotte Granfondo Alps yourself there are a few suggestions I would make: