The ‘Bald Mountain’, feared, respected and with an illustrious and sometimes troubled history, Mont Ventoux is to cycling what Silverstone is to motor racing and the Nou Camp Stadium is to football. A ‘must do’ climb for cyclists I decided to pack up my bike and head off to the famed mountain for the Haute Route event.

A freak, jutting out of an otherwise relatively flat landscape, Mont Ventoux can be found in Provence, in the south of France, and towers at an eye-watering 1912 metres. Gaining notoriety in the Tour de France, the ‘Giant of Provence’ has often been the stage for some of the sport’s most iconic moments, whether that be Chris Froome’s 2016 running saga to Tom Simpson’s passing on the 1967 edition of the race. 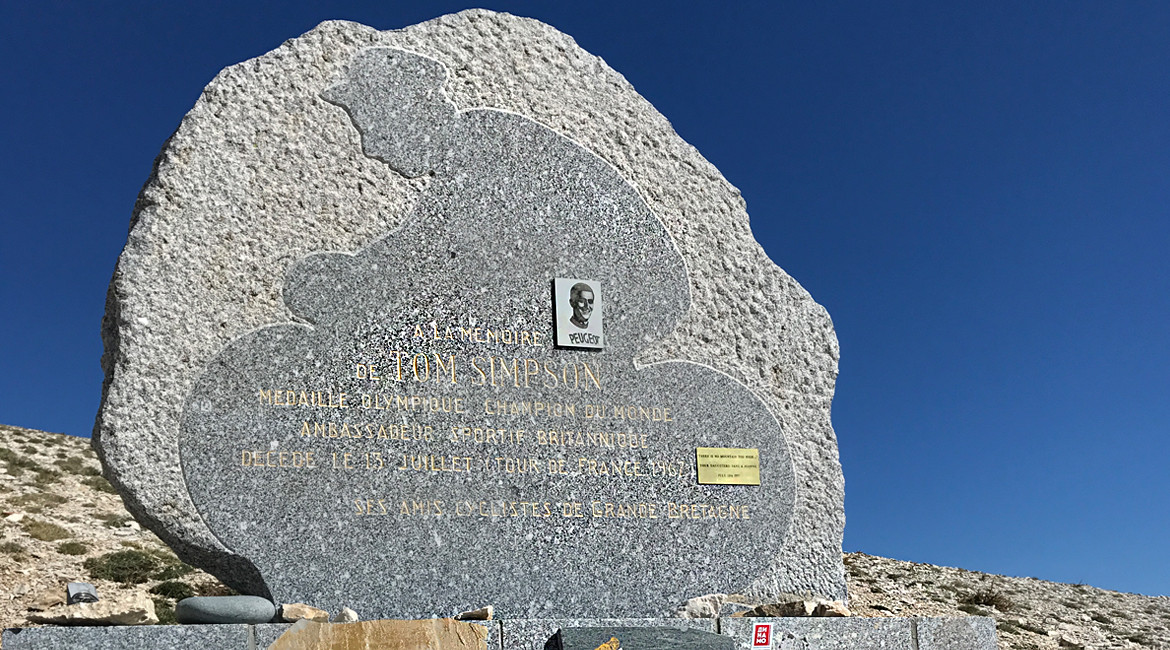 If there was one word to sum up this mystical mountain many would opt for ‘wind’. ‘Venteux’ in French actually means ‘windy’ and as I would find out on the three day Haute Route event, wind would play a key part in the ride.

Arriving at the picturesque town of Bedoin, nestled neatly below Ventoux, I was greeted by the Haute Route crew who gave me my race number and rider’s pack. 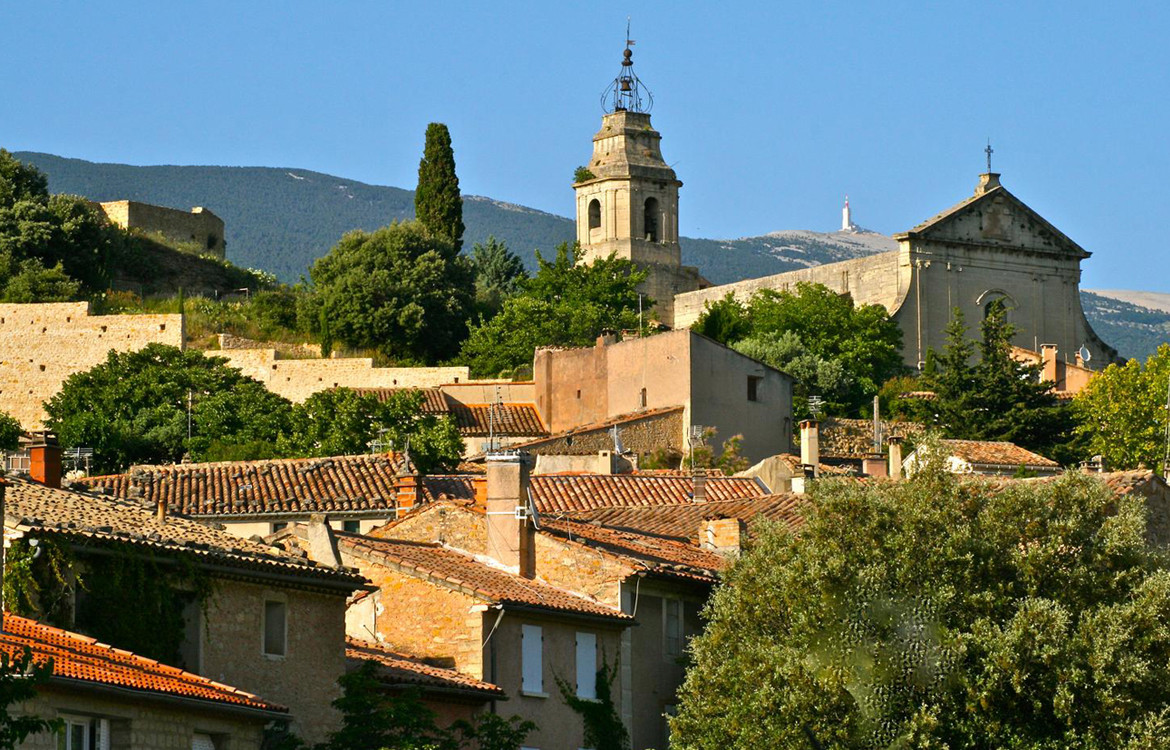 The first stage would be 107 kilometres, which although not that long, would definitely be a challenge for the 400 participants, as it was littered with leg sapping climbs and an ascent of Mont Ventoux to finish off. 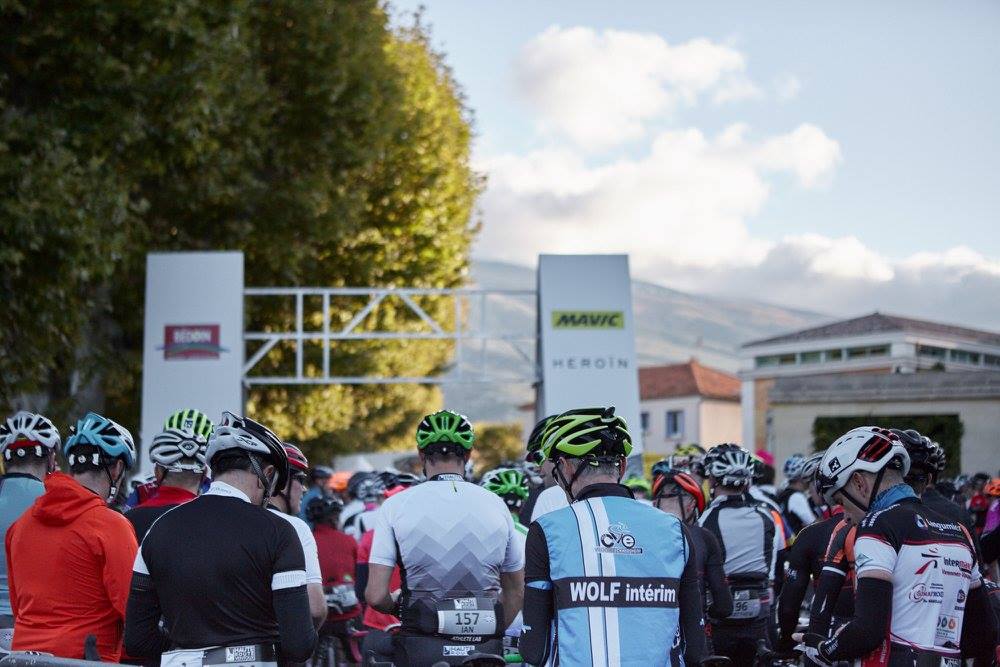 Arriving on the start line, ready for a 9am departure, the Mistral wind was blowing furiously, so much so the organisers decided, rather sensibly, to shorten the stage and finish it at Chalet Reynard, rather than the exposed summit of Mont Ventoux.

Winds on Mont Ventoux are often recorded to hit over 90km/h with the record being a startling 320km/h. We were at the mercy of mother nature and we would be respecting her wishes, especially with two further days to ride.

The start was fast, as the Mavic team hit the front. Tour de France legend, now Mavic ambassador, Frank Schleck, whipped up the pace on the first climb, the 574 metre high Trois Termes, and soon the 400 rider strong peloton split, with myself and a dozen others making the selection. 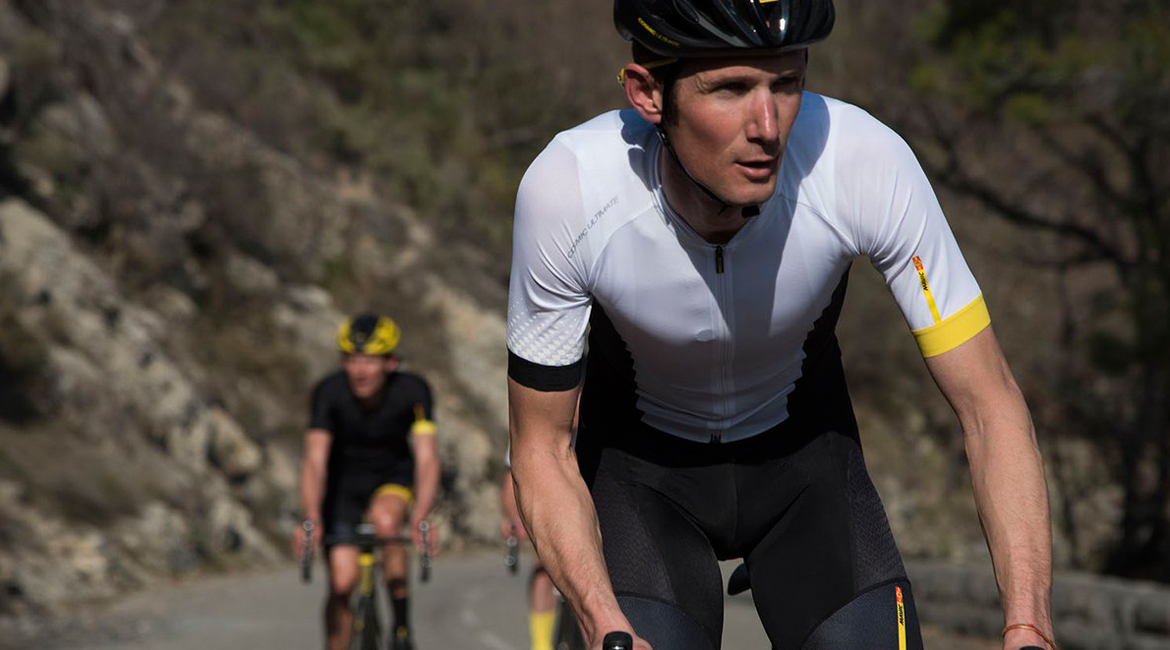 Onto the fast descent and the sheer force of the wind buffering the bike could be felt. I was running Mavic R-SYS SLR Wheels and I was glad I was using this shallow depth clincher, as I saw my fellow riders struggling in the wind on deep section hoops.

The pace was electric and onto the second climb of the day, Liguiere, a 985 metre high, a 10.5 kilometre, averaging around 7%, the group had reduced to just 8 riders. With Mavic keen to stamp their authority and with just 40 kilometres to go, William Turnes attacked on the lower slopes and soon pulled out a sizeable gap. With Frank Schleck dancing on the pedals behind our group split and after a do or die effort to bridge there was just 4 of us in the chase group. 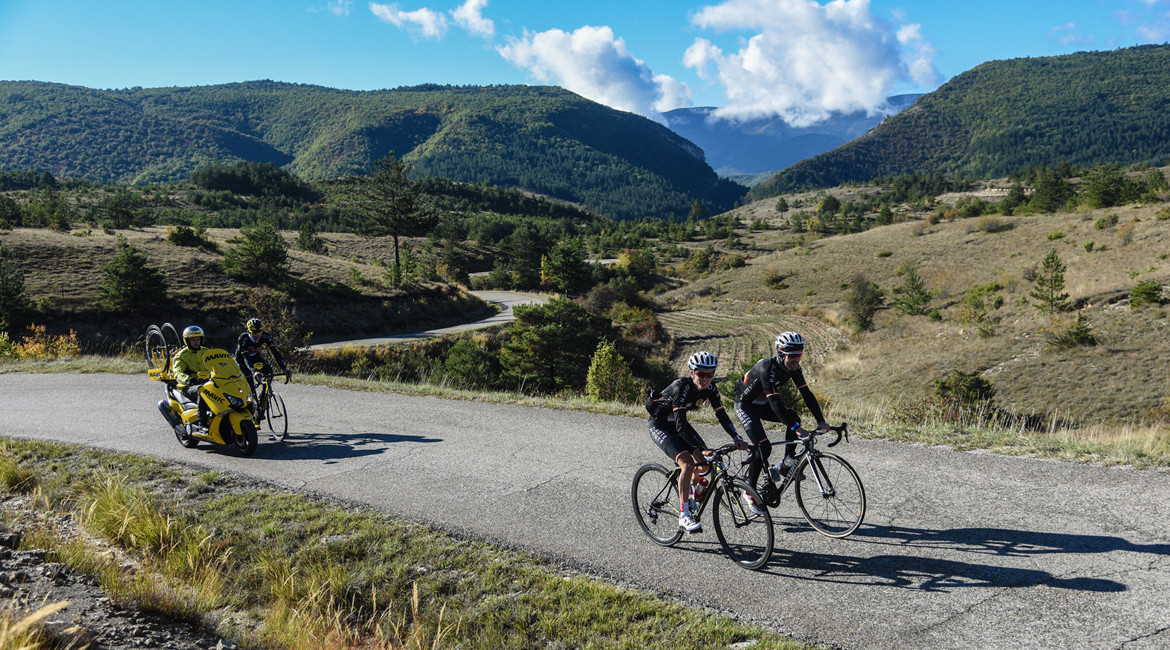 Frank, with his job done for the day, swung off at the feed zone and left me and my two French companions chasing a storming Turnes. The wind was relentless, and even with the three of us working to share the pace, we were still having to kick out over 400 watts just to maintain the pace.

So onto the climb of the day, Mont Ventoux. Easing the riders in, the organisers opted to take the event up the mountain from the Sault direction. A route that can be separated into two parts, the first, a steady 4 - 6% gradient, before it eases off to just 2.6% for the remainder of the climb to Chalet Reynard, where the stage would finish. 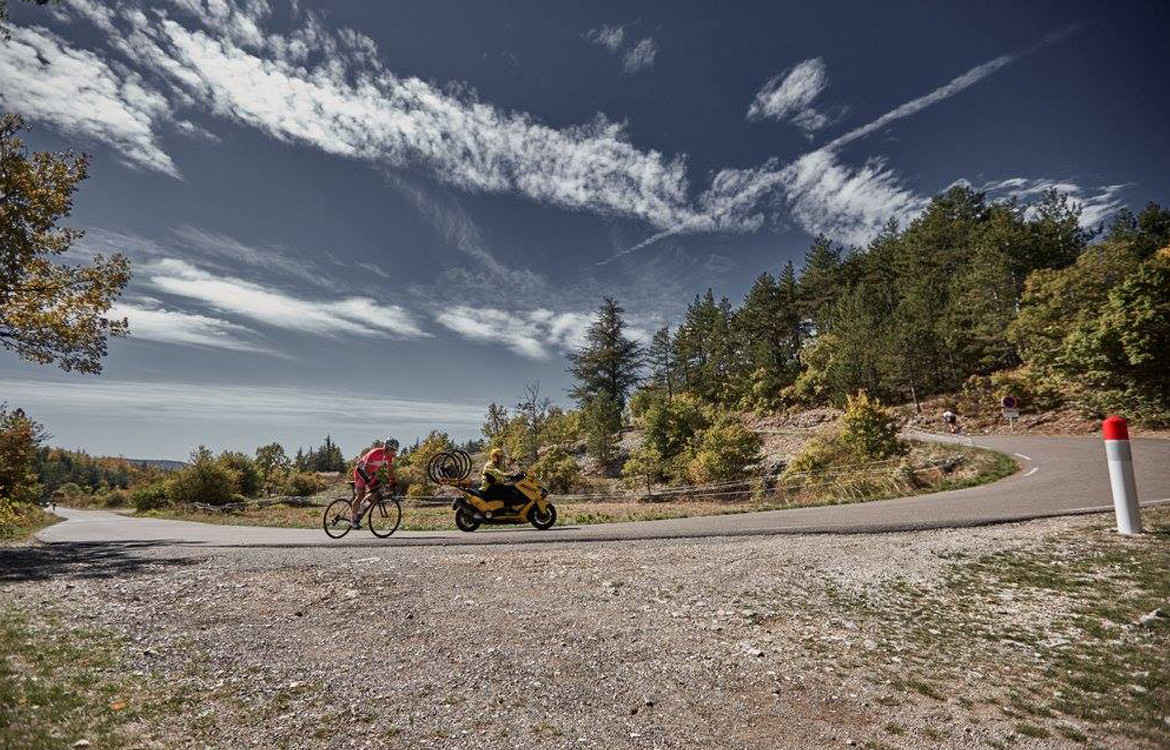 Climbing through the trees, this 16-kilometre ascent was sheltered, on silky smooth roads and made for the calmest part of an otherwise windswept day. Being so sheltered we were able to ride up the climb in the big chainring. Finishing the stage in 3rd place, it was time to get the feet up, ready for stage 2, the Queen stage the next day. 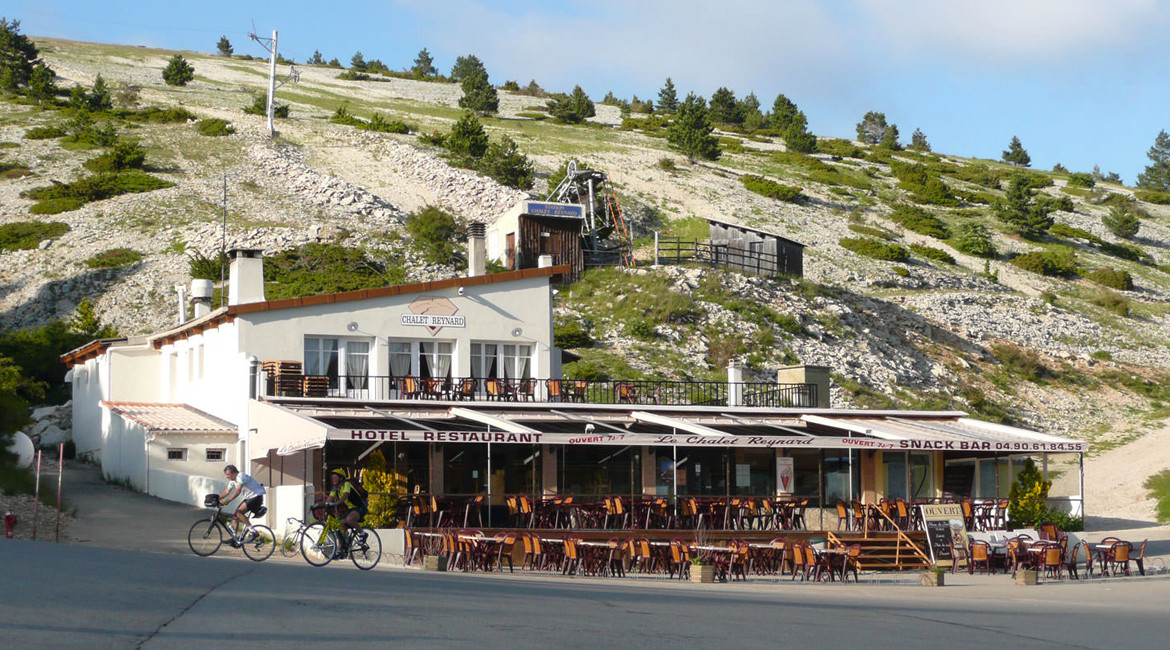 The calm after stage one. Waking to blue skies and light winds, the chill in the air was apparent as we set off on the second stage, a 141 kilometre, 3,300-metre day out, with four categorised climbs and a gruelling ascent up Mont Ventoux, this time from the Malaucene direction. 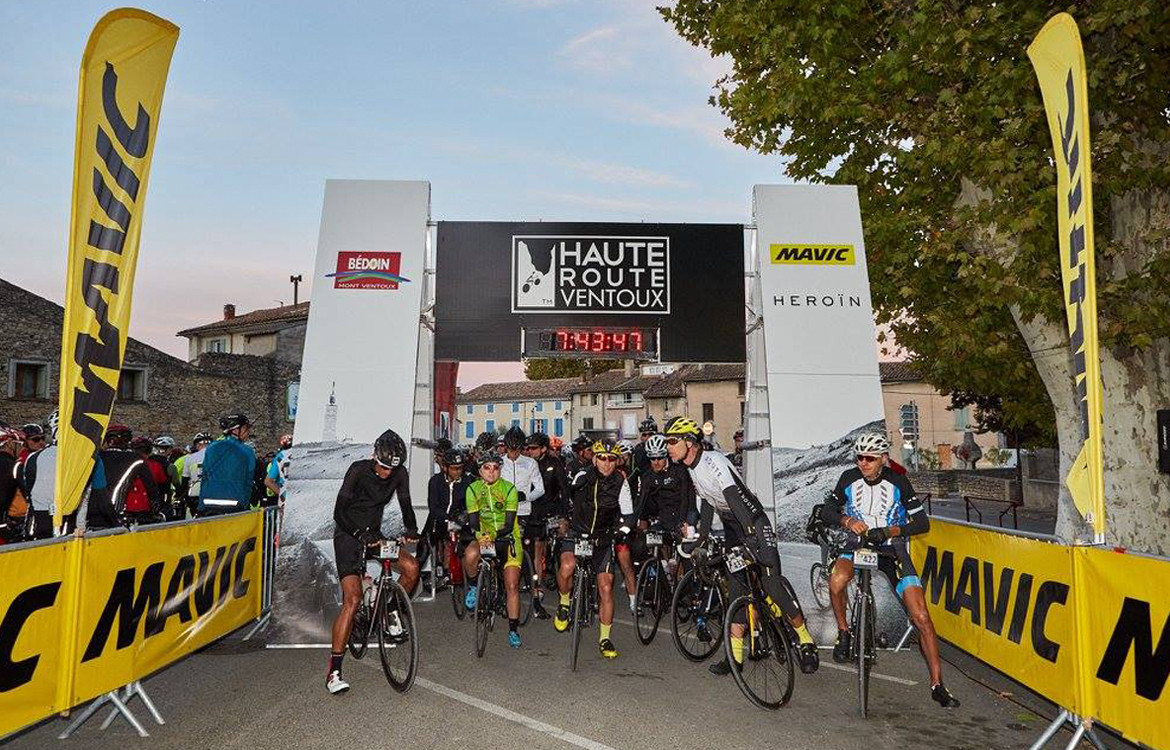 Still, with legs feeling good, I pushed on and soon pulled out a sizeable gap. The first serious ascent of the undulating day was the Col d’Aulan, at 60 kilometres in, this climb rises to 845 metres and is 6 kilometres in length. From there the climbs come thick and fast, with the Col de Peyruergue (820 metres, 74 kilometres in) and then the penultimate climb, the Col d’Ey (718 metres, 89 kilometres into the stage). Although individually, these climbs were not too taxing, together they were definitely a test for the legs and descending the Col d’Ey after being on the attack for over 90 kilometres solo, I had the final challenge of the day within sight, Mont Ventoux. 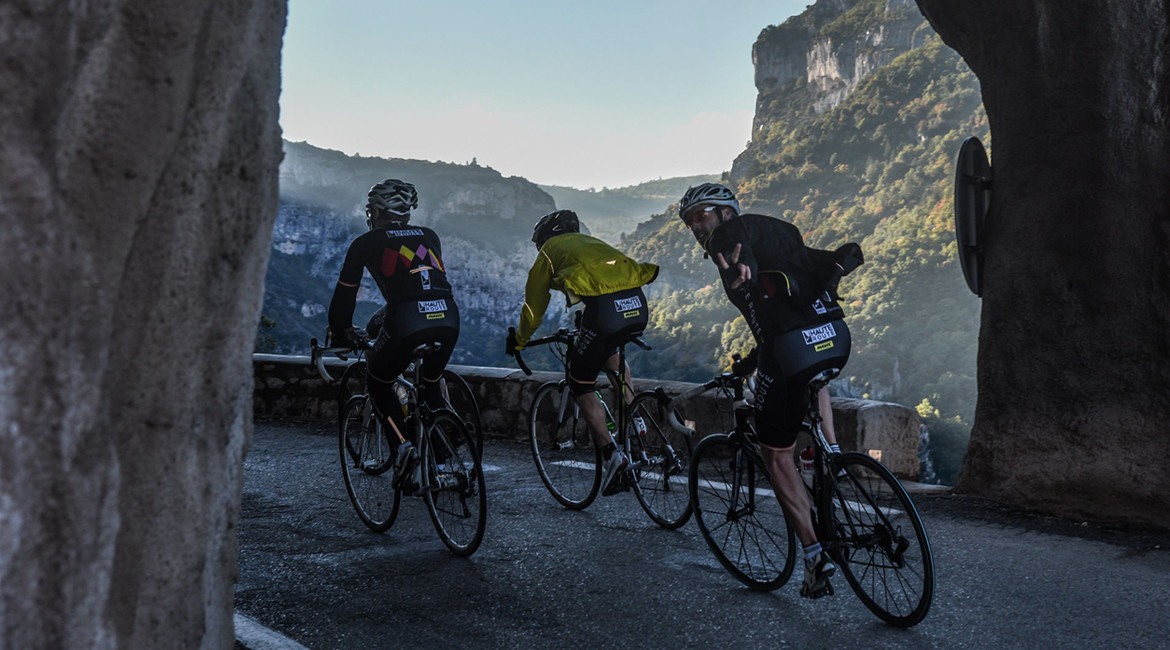 My time gap on the next group on the road had varied between 2 and 7 minutes throughout the day and as I hit the lower slopes of Ventoux, at 120 kilometres, the pace behind started to increase.

21 kilometres to the finish, I could do this, well that was what I thought until 6 kilometres into the climb when the lead car pulled away...I was about to be caught. It is worth explaining at this point the difficulties of the mountain ascent from this side. Climbing 1,535 metres over 21 kilometres, it is relentless, with gradients starting at 7% before kicking up to 9%. The real kick in the teeth is the middle part of the climb where there are stretches of 11%. The final 4 kilometres averages 8% and after a long day out from I was feeling every one of those kilometres.

The inevitable cracks started to appear halfway up the climb as I was passed by two riders. It is important on climbs like this not to panic or go into the red, so gauging my effort (using my power meter) I plugged away, keeping a consistent pace. Into the final kilometre I was caught by a third rider and passed meaning I battled across the line to finish fourth on the stage. Not what I planned but I took the chance and this time it didn’t pay off. 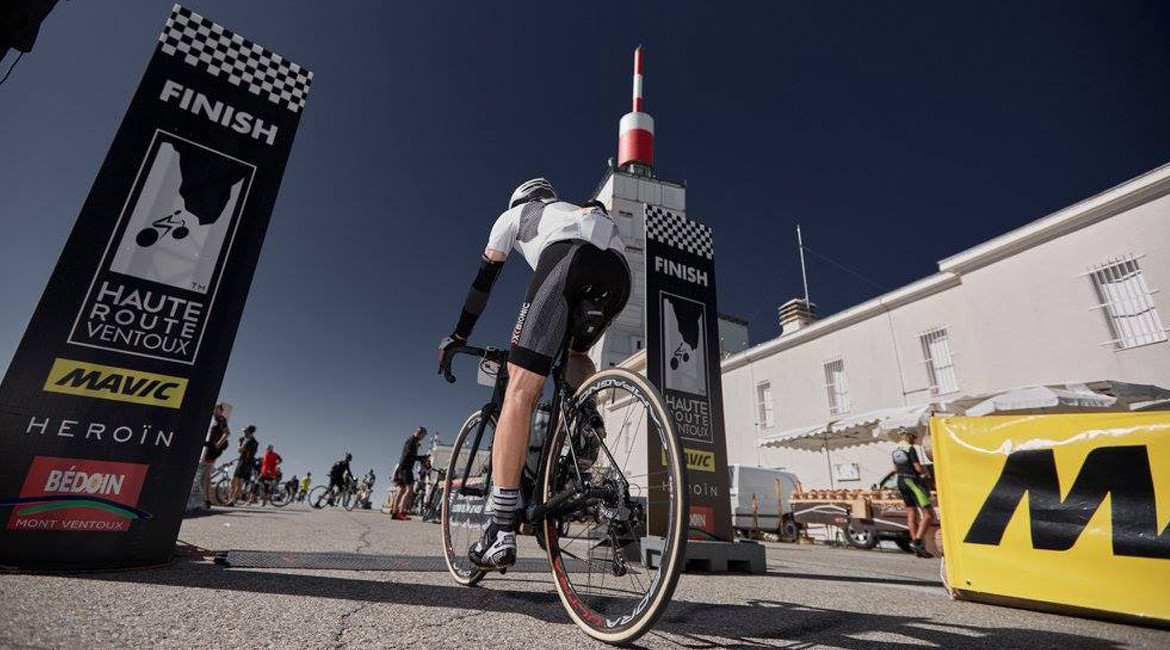 Finishing at the iconic weather station, the heat was beating down and the breathtaking panoramic view briefly made me forget about the efforts of the last 5 hours of riding. Still sitting third on the general classification, and with the final stage looming, I got an early night.

Waking early, the race of truth, a mountain time trial would be the final test. Saving the most challenging ascent to last, the organisers set riders off in 20-second intervals up the feared and iconic Bedoin side. 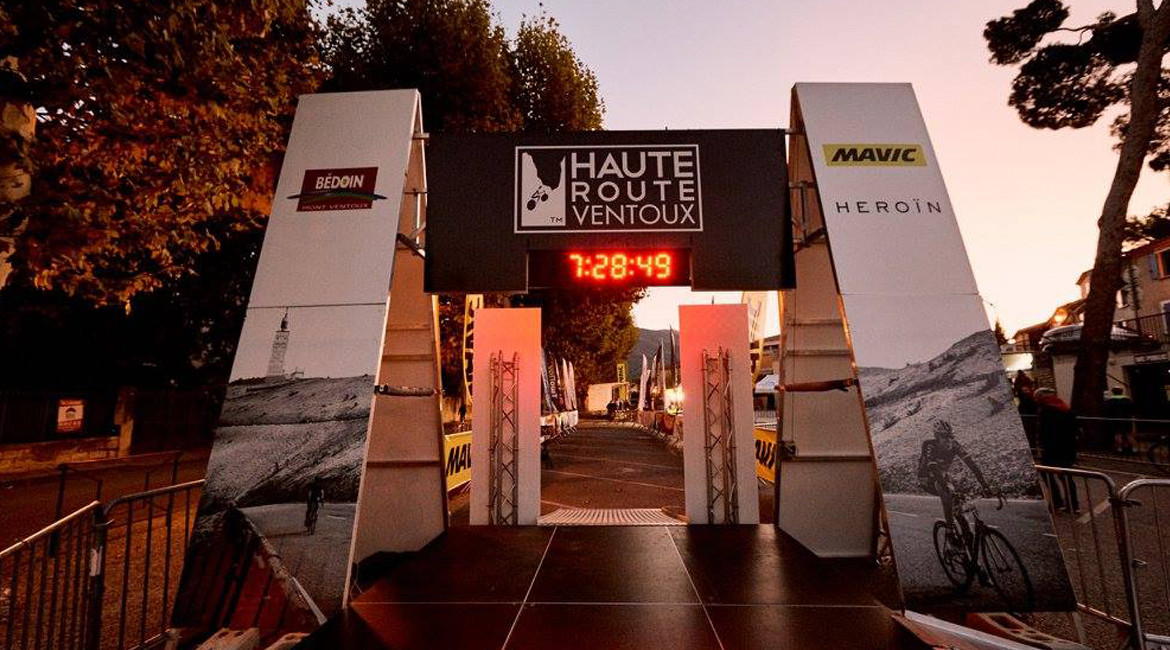 A 21.5-kilometre test, with gradients averaging 7.5% and 1612 metres of climbing, was going to be tough. Eighth off, the key here would be to pace my effort, especially after the previous day’s exploits. Settling into a pace I thought I could hold for just over an hour, I held back on the early slopes, keeping the power around the 300-watt mark before turning up the pace on the final 6 kilometres, exposed slopes, from Chalet Reynard to the summit.

Into the final few kilometres and the wind on the mountain was causing havoc, blowing me from one side of the road to the other. Crossing the finishing line, spent, after giving it my all. I was told the remaining riders would be finishing their time trial at Chalet Reynard as the final slopes were deemed too dangerous to ride with the strong winds. A bit disappointed as I had paced my ride up to the summit rather than the 15-kilometre mark I knew I had probably lost my podium place. 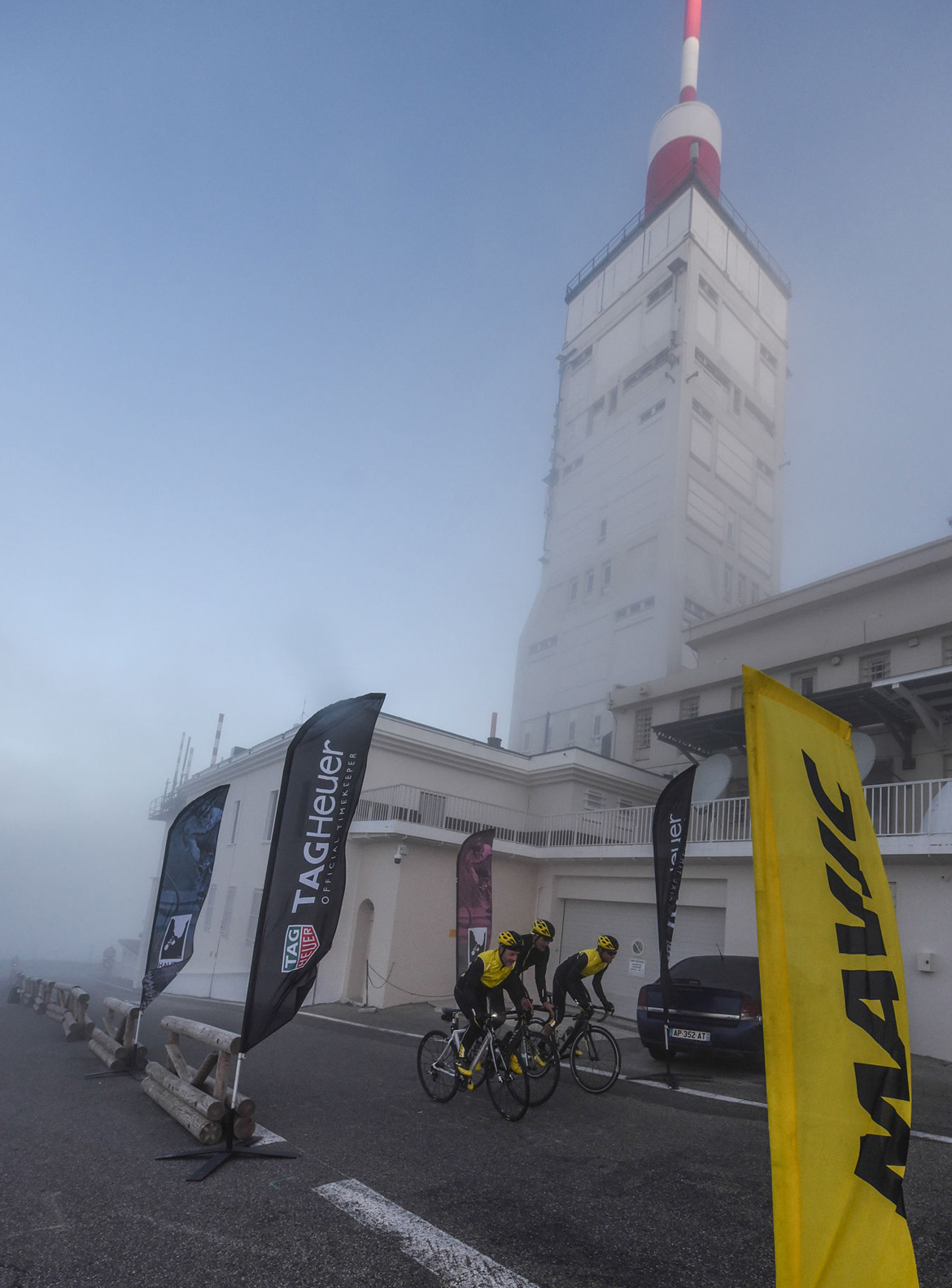 It was the correct decision by the organisers though, as I struggled to descend the mountain, so much so, I actually ended up getting in a car for a couple of kilometres, until the wind abated.

Fifth overall and with three ascents of Mont Ventoux under my belt I was definitely feeling the effects of the three days but was leaving with newfound respect, admiration and love for the alpine climb. 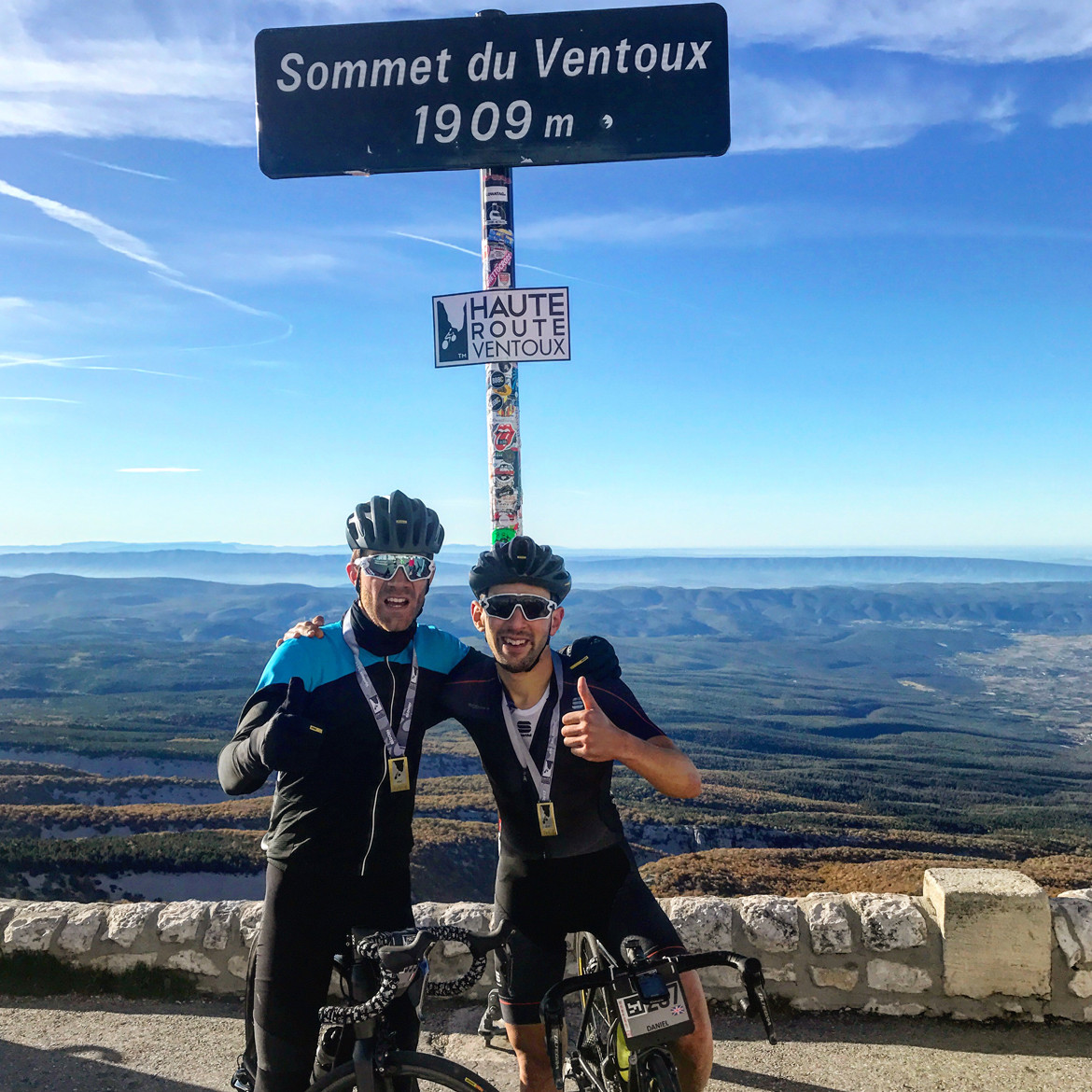