As far as flash destinations are concerned, it’s not often that you’ll hear about Germany on any top five roundups or travel guides. With sun-soaked islands and snow-crested peaks grabbing all the glory, it’s easy to overlook a country that conjures up images of conformity, order and a rich engineering industry. Casting aside the sausage-eating, beer-quaffing aspersions swallowed since my youth, my girlfriend and I settled upon a week-long cycle tour through the most gingerbready territory in the entire federation - The Black Forest.

Famed for its cherry topped cake and cuckoo clocks, the Black Forest has a terrain that was best described to my unwitting girlfriend as ‘hilly’. With over 100 points breaking the 1000 metre elevation mark, mountainous would have perhaps been more accurate. The area is wildly popular with hikers seeking a whiff of the pine, healing waters and the occasional picture-perfect town. 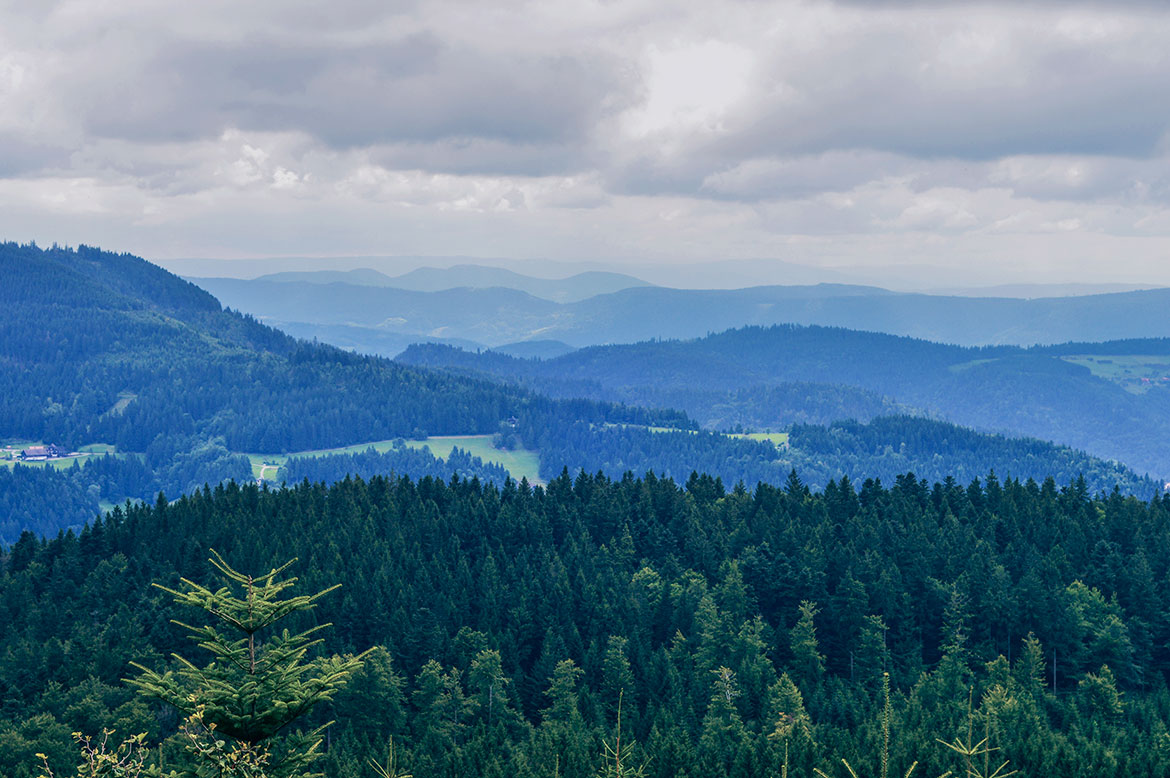 Tackling the German roads would be two steel machines, carrying all our kit as we rode self-supported from camp to camp. In preparation we’d kitted our bikes with Brooks B17 Saddles, and fitted wider tyres, hoping that this would go some way to making living on two wheels for six days slightly more comfortable. 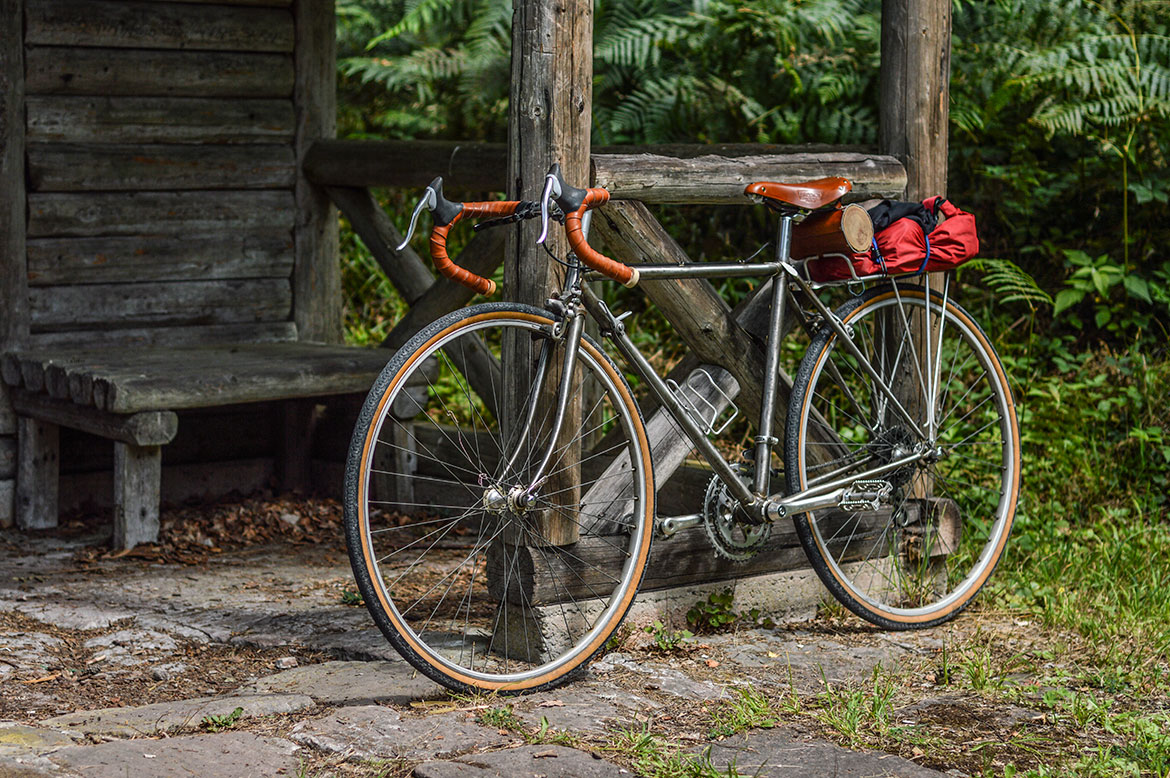 Unloading the car, a small campsite in a hamlet called Faustburg was to be our base for the first couple of days. Setting up a tent in the dark and generally making a nuisance of ourselves, we started developing a plan for the following week. Striking out west, across the forest, we wanted to cycle over the border into France and finish in the city of Strasbourg.

Day one - Finding our bearings 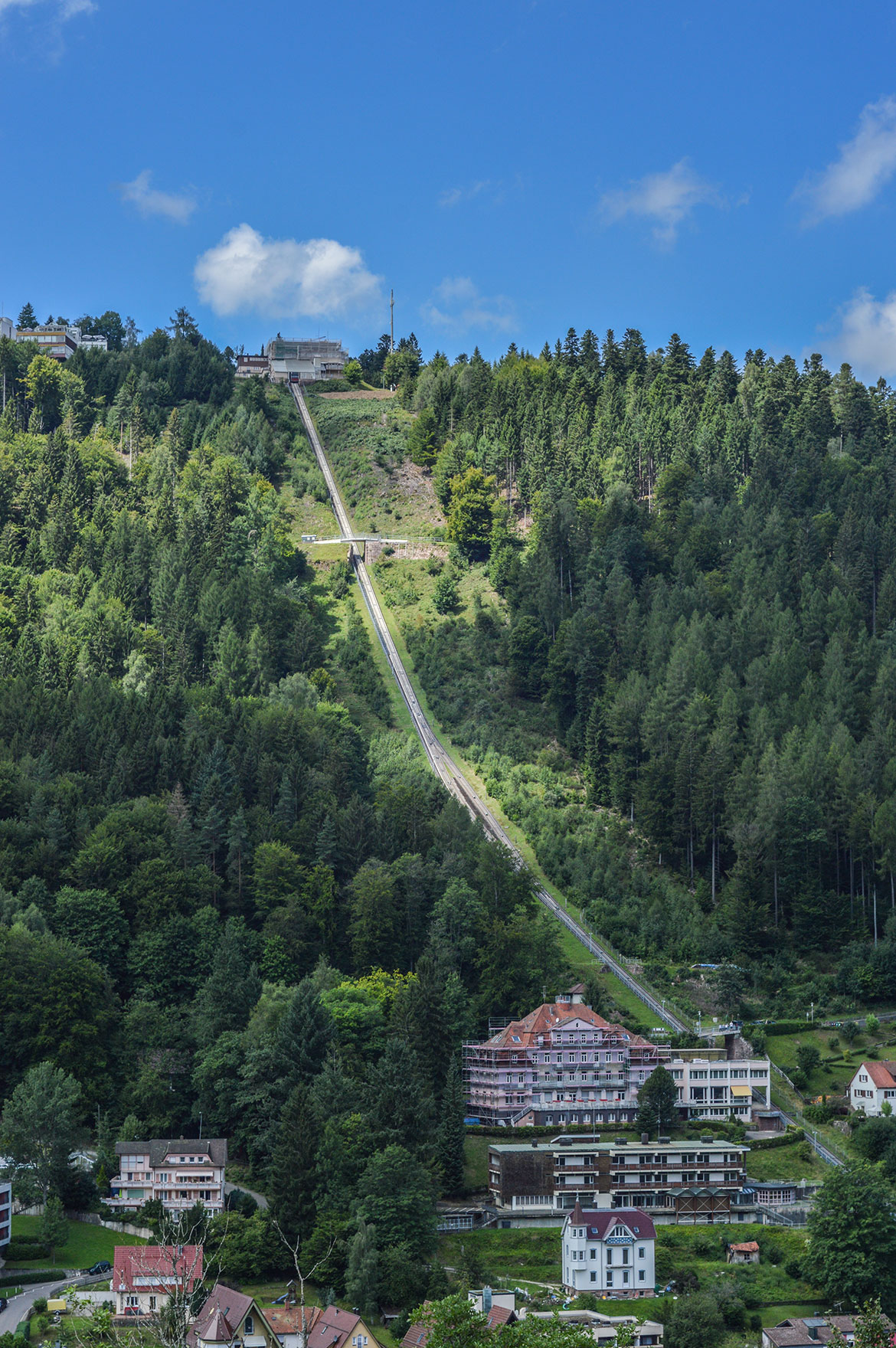 Waking to the sound of running water, visions of luscious springs and trickling streams tempted us to unzip the tent. Finding ourselves pitched next to the campground's communal washroom, we were kindly assured that the stream was the other end of the site.

Setting out on our bikes, curiosity quickly lead us onto more obscure roads, and soon enough, we found ourself on steep gravel climbs, straining for traction as August sunlight beamed through the trees. Twisting, turning, and occasionally punctuated by the odd refuge cabin, our path wound over and around the hills, eventually landing us above the spa town of Bad Wildbad. 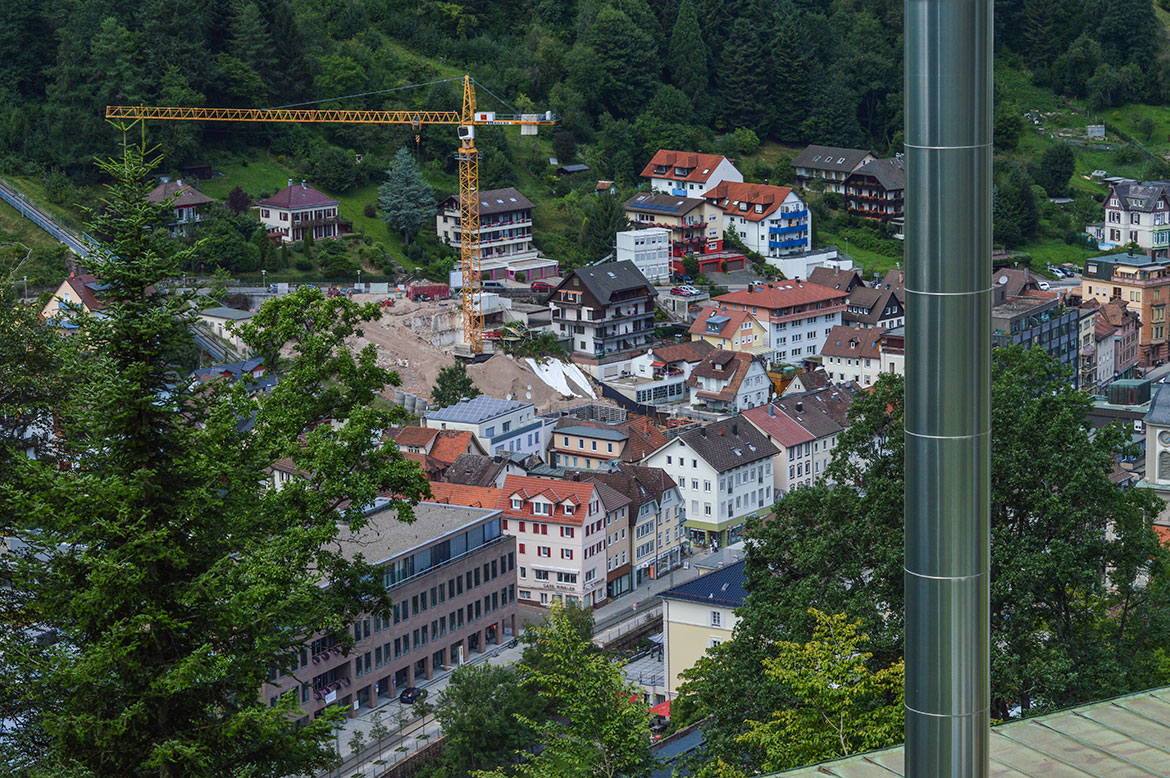 Pondering quite how to bridge the not inconsiderable barrier between us and lunch, we eventually stumbled upon a small track. Descending the rough stuff on rim brakes at gradients approaching -30%, we coyly slid into town. Truncated by the steep hills and the river tearing through town, Bad Wildbad is characteristic of a typical Black Forest town. Sated with pretzels and salty treats, we got back on the road, deftly avoiding the midday sun.

Rolling back to camp thoroughly filled, the first major climb of the trip came into sight. Liberated, temporarily, of panniers, the seven-kilometre climb that crowned our first day in the forest was a sign of what was ahead. Long slogs at constant gradients, it was taxing but entirely tolerable. Silky smooth roads, un-rutted and wide, made for perfect companions and plotting winding courses through the trees, we were soon enamoured with the gentle breathlessness that came from the steady up. 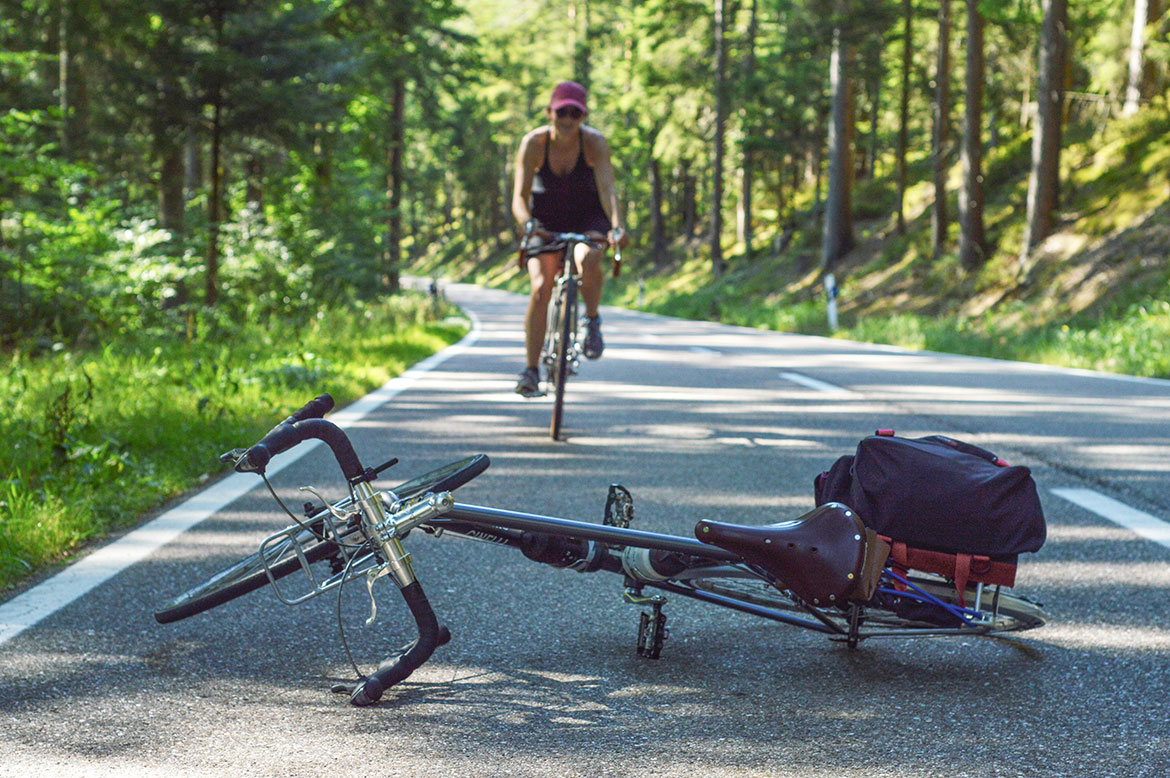 One of the joys of touring is not having to be quite so goal led as when riding on the road. Without a kilometre target, altitude ambitions, or average speeds to satisfy, we were free to set ourselves a simpler task - find a lake and go swimming. Anticipating an easy ride, my girlfriend, Stef, pointed eagerly to the biggest blue splodge on the map and we set off. Branching out into the forest the paths soon thinned until we were pushing bikes up rocky singletrack. Stopping in the next town to fill panniers with picnic fodder plundered from a local store, we plunged kilometre after kilometre down empty roads to Nagoldtalsperre. 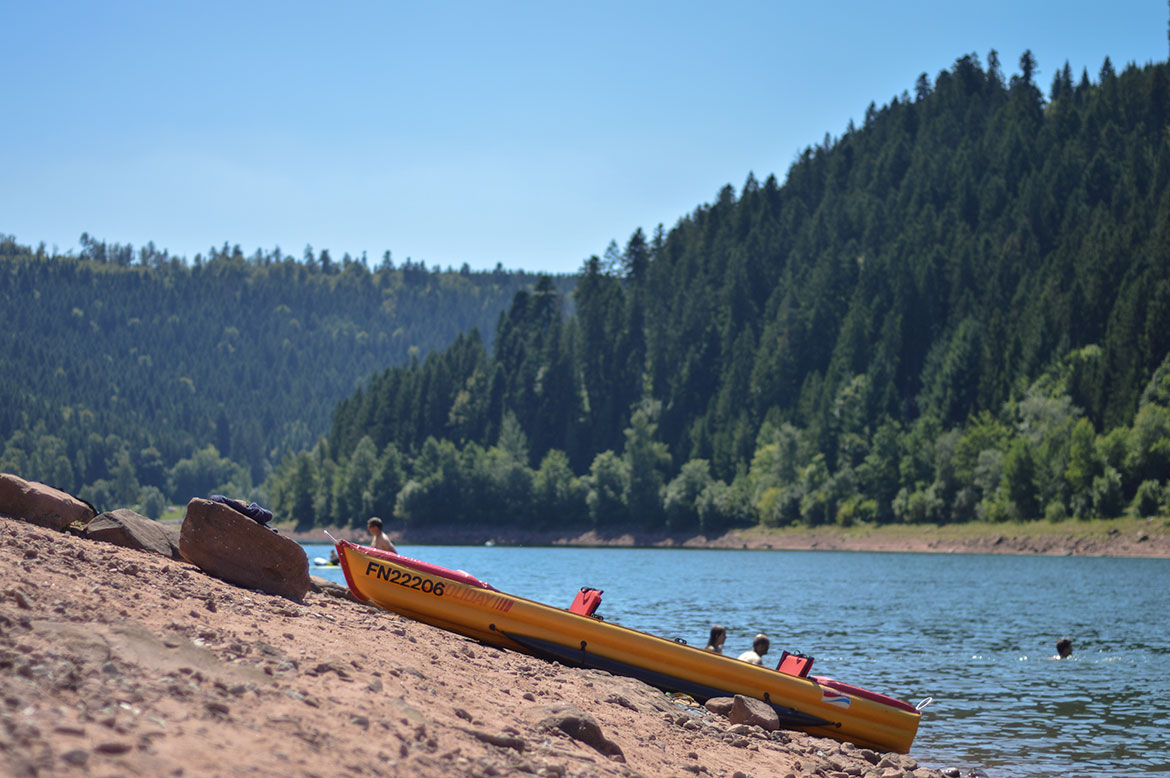 After a swim and a scrap of bread and slaw, we were reluctant to regain the altitude we’d lost on the 20% descents to the lake, but it had to be done. Climbing back past piles of freshly felled timber and on tough but velvet smooth roads, we were surprised that such a short ride, 40 kilometres in all, would throw up quite such an obstacle, with over 1000 metres climbed on a day we had set aside for the purposes of “relaxing”. 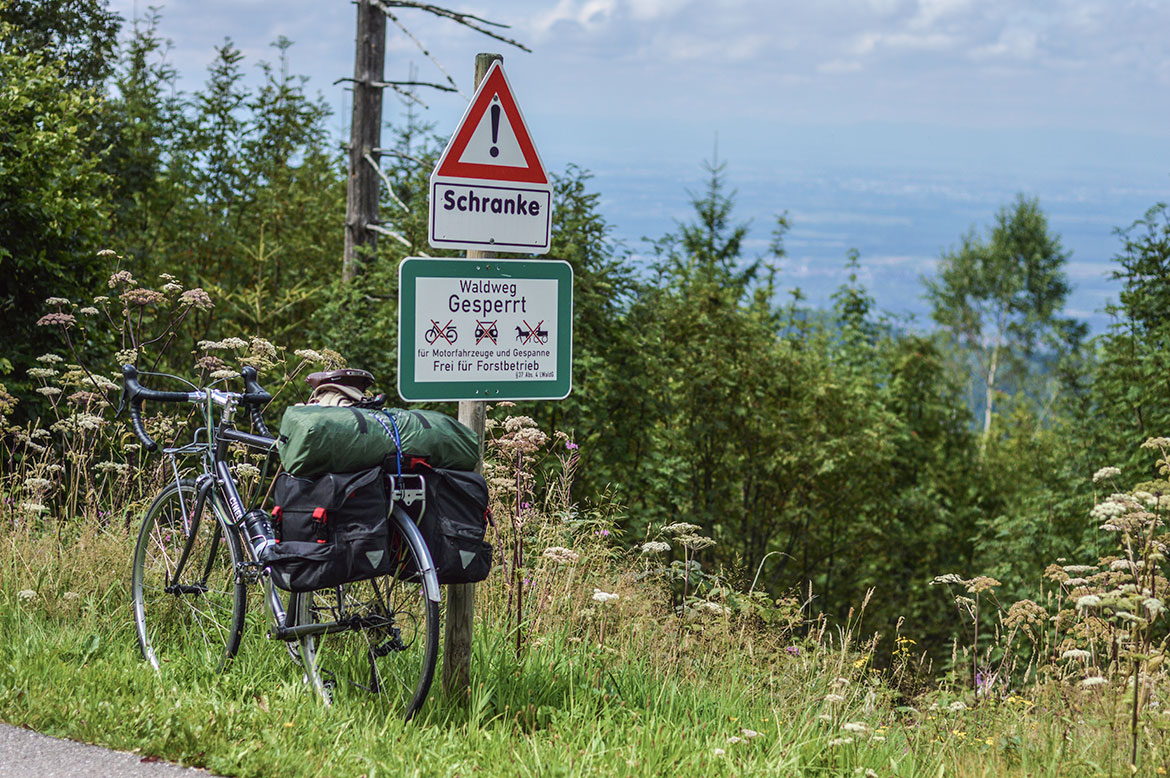 Eager to really get out on the road and to escape the campground routine, we decided to push onwards. Waking early, and packing up our tents, sleeping bags and food, we soon had somewhere between 30-40 kilos of gear each loaded onto our bikes. After cautious studies of the map, picking the most scenic route, we set off. Immediately it became apparent that taking that sort of weight up hill was a challenge. Whilst Sagan might well be more stylish, pedal stroke for pedal stroke, my front wheel spent considerably more time in the air. 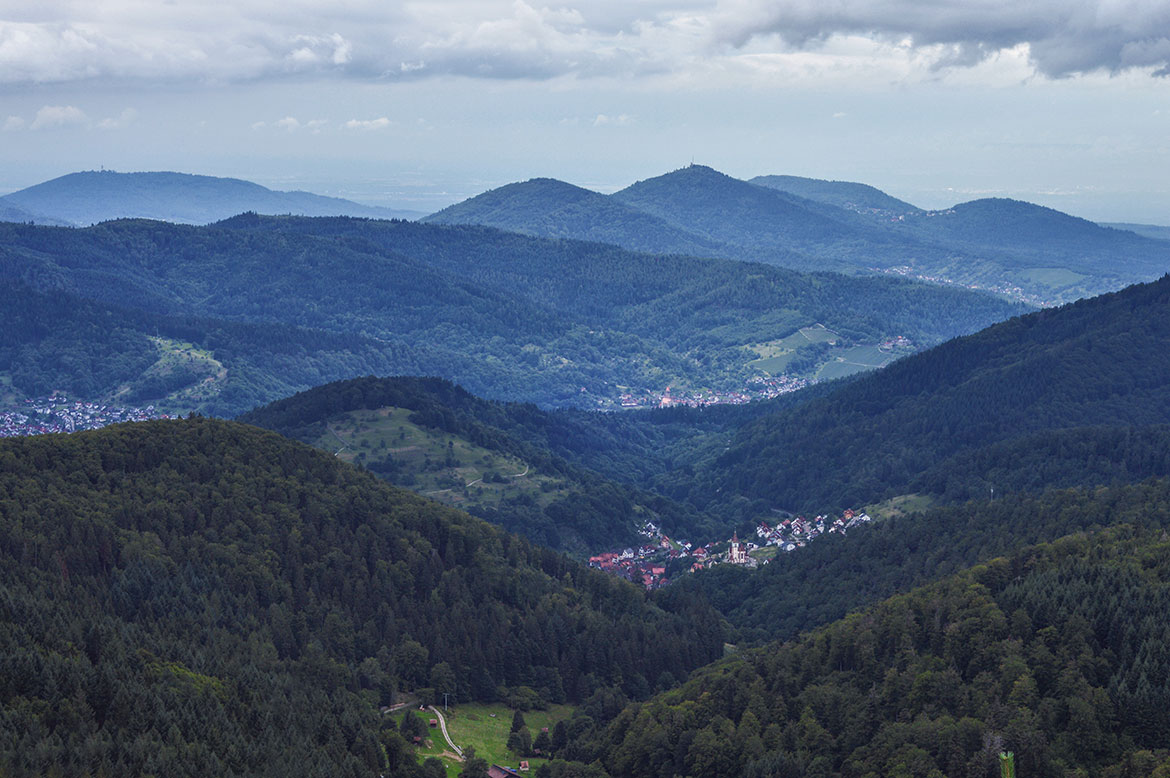 The first descent of the day saw us freewheeling for seven kilometres. Our fully-laden juggernauts forcing us into a game of speed scrubbing, we found ourself pursuing a valley road past lumber yards and picturesque timber barns. Turning off, the gradients reappeared with a vengeance. Climbing, out of breath, we found ourselves passing ski stations, and attracting the gaze of the locals. Over 20 kilometres into the ride, we’d still only witnessed a handful of cars, easily picked out over the serenity of the rolling forest.

Cresting at a frustrating 933 metres above sea level on the day’s second climb, we were rewarded with a panorama of the forest from Schwarzmiss. Little more than a layby and a slight clearing, the view of rolling hills extends before a long flat plain emerges - the Rhine Basin, and beyond that, the French Vosges. 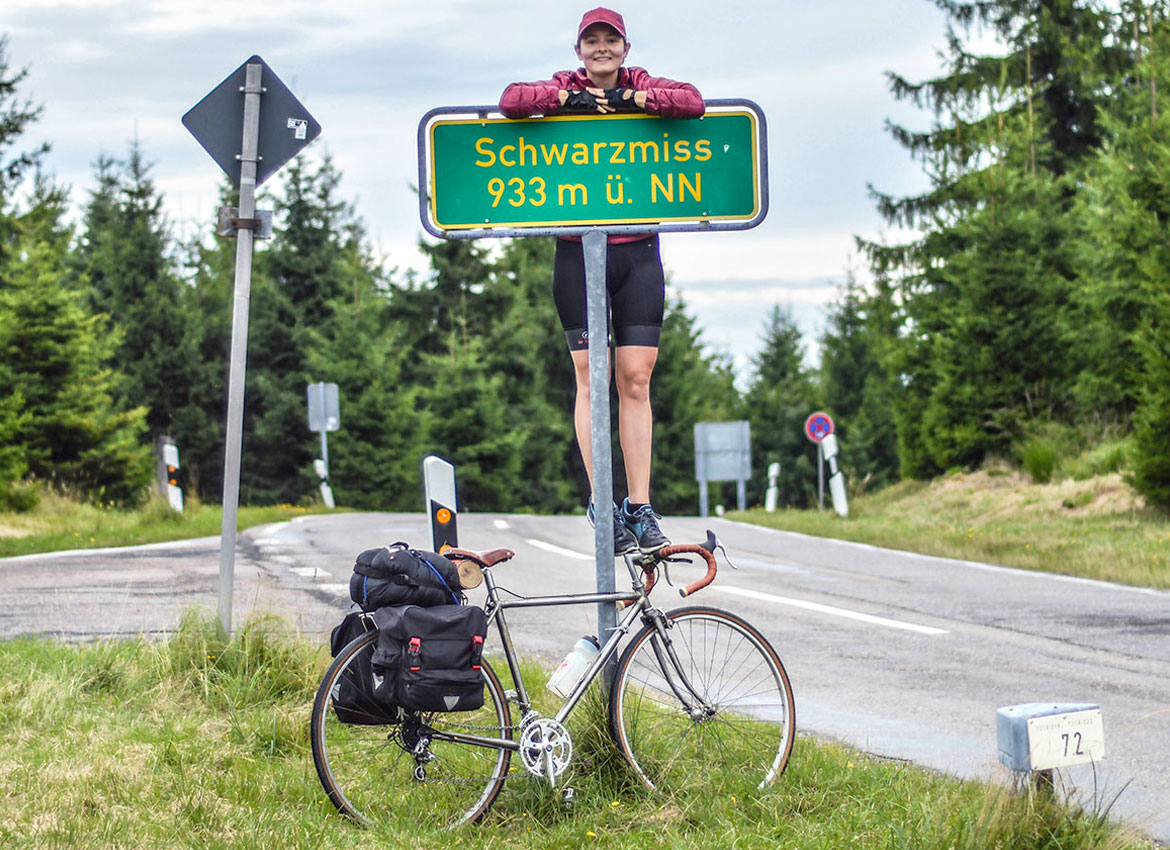 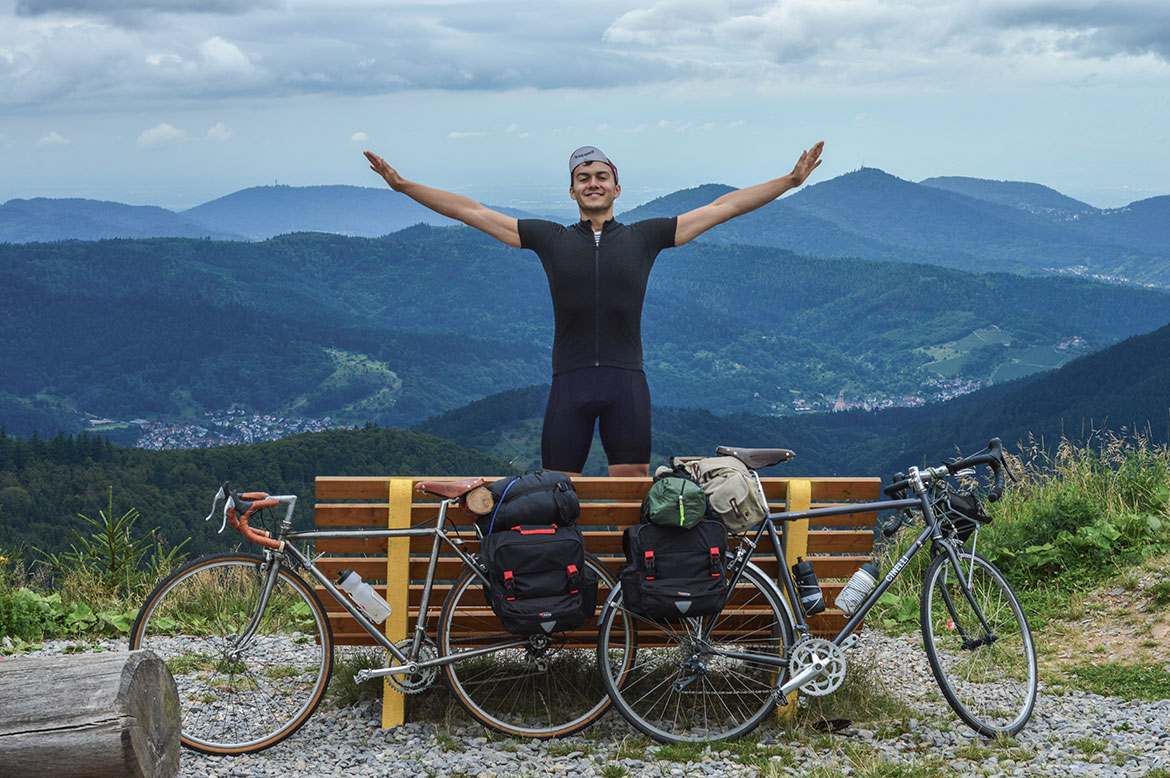 Descending through Reichental, and pausing only to refill out bottles from streams, 11 kilometres of hairpins delivered us to Weisenbach. Our halfway house for the day, we were happy to concoct a meal by the river, raiding the supermarket for it’s finest delicacies and crafting ourselves something greater than the sum of its parts. Hopping a fence and taking in the view down by the river, we took advantage of the freedom that comes with having everything you need already with you out on the road. 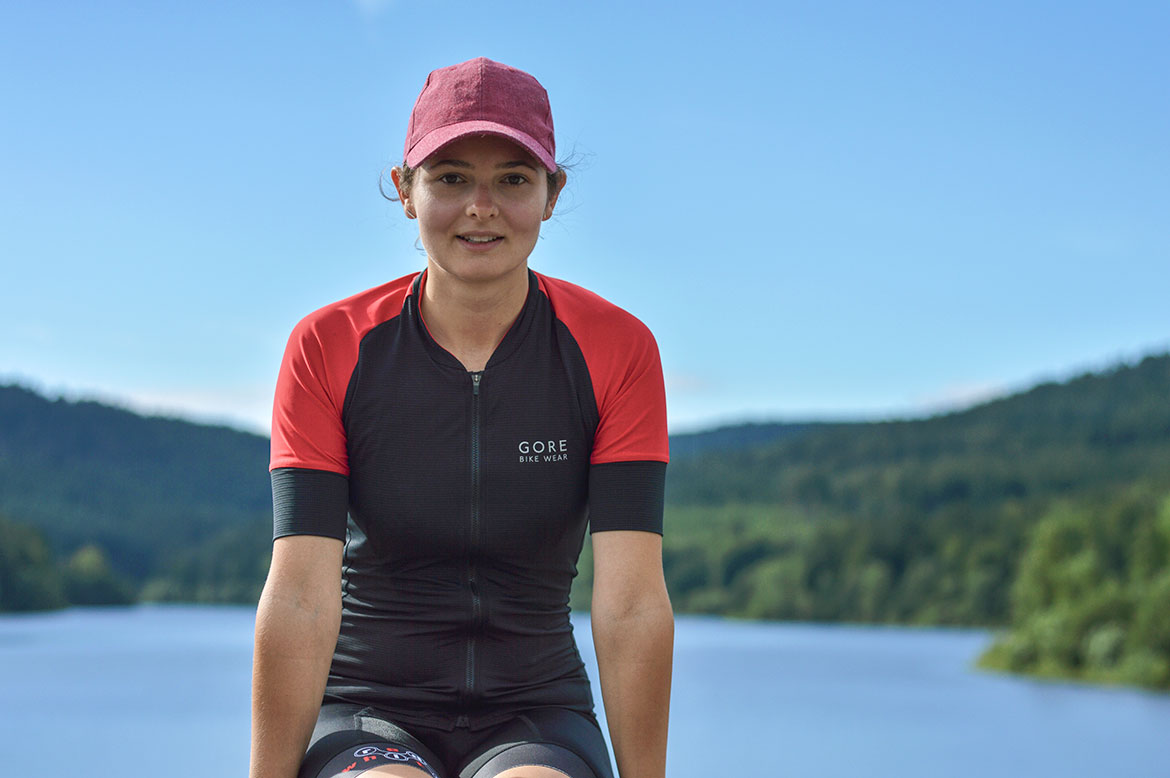 Moving steadily on, we hugged the main road as we continued in 30 degree heat up the valley and towards the last climb of the day. Rising slowly we weaved our way through the steep hillsides and exposed rocks, being treated to quaint towns perched precariously on almost impossible slopes. Taking a turn at Raumanzach, the road once again kicked up. With handlebars rising like the rearing of an unwilling horse, steep gradients saw us spiral towards another reservoir, as we grabbed a Pils in a roadside kiosk and celebrated the last hill climb of the day. Plateauing for the day at 700 metres, we had hauled ourselves, bikes, and luggage 64 kilometres in all, and upwards of 1400 metres in altitude.

Our tent tidily ensconced between two mountainsides, we took time to appreciate the stars and the searing fresh air. German Maultaschen sat in the pan, once more we produced a map and made a plan for the next day. 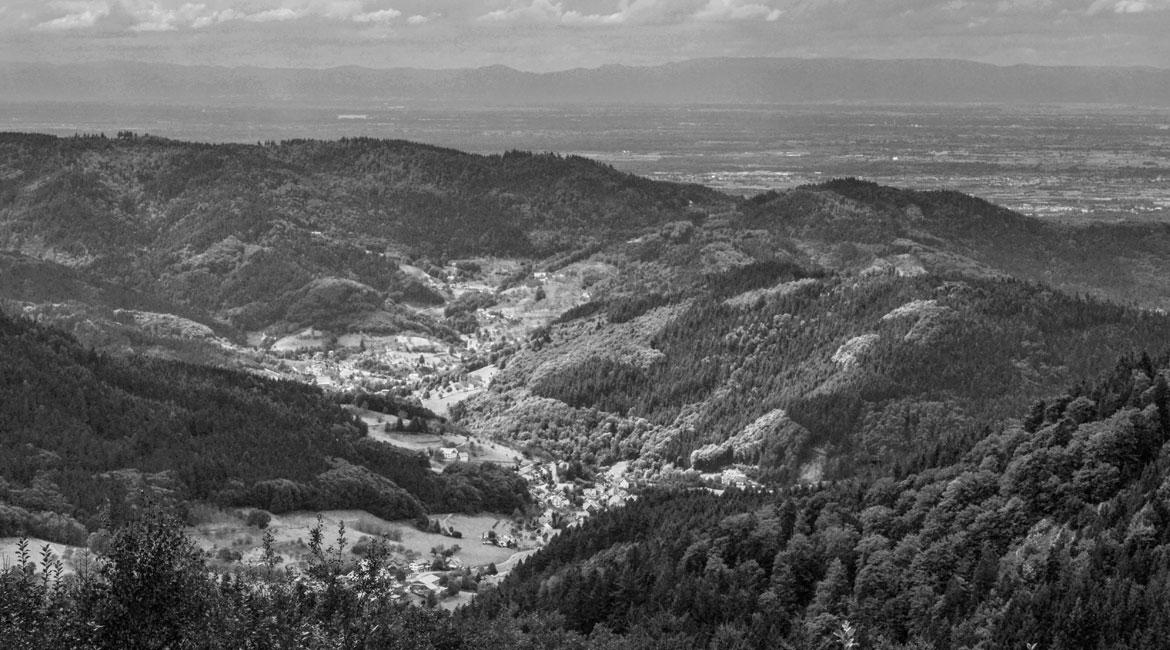 So, having broken the back of our ride to Strasbourg on day three, day four was a bit easier on the legs. Having battled uphill the day before, we were able to take things easy. Setting off mid-morning, once more backed by the reassuring weight of our equipment. The final 200 metres of our mountain climb remained and, after reaching the summit, we were greeted by a flat spread of land, snaked by the Rhine, with France beyond. Sneaking coyly over 1000 metres of elevation, we took lunch at Mummelsee. 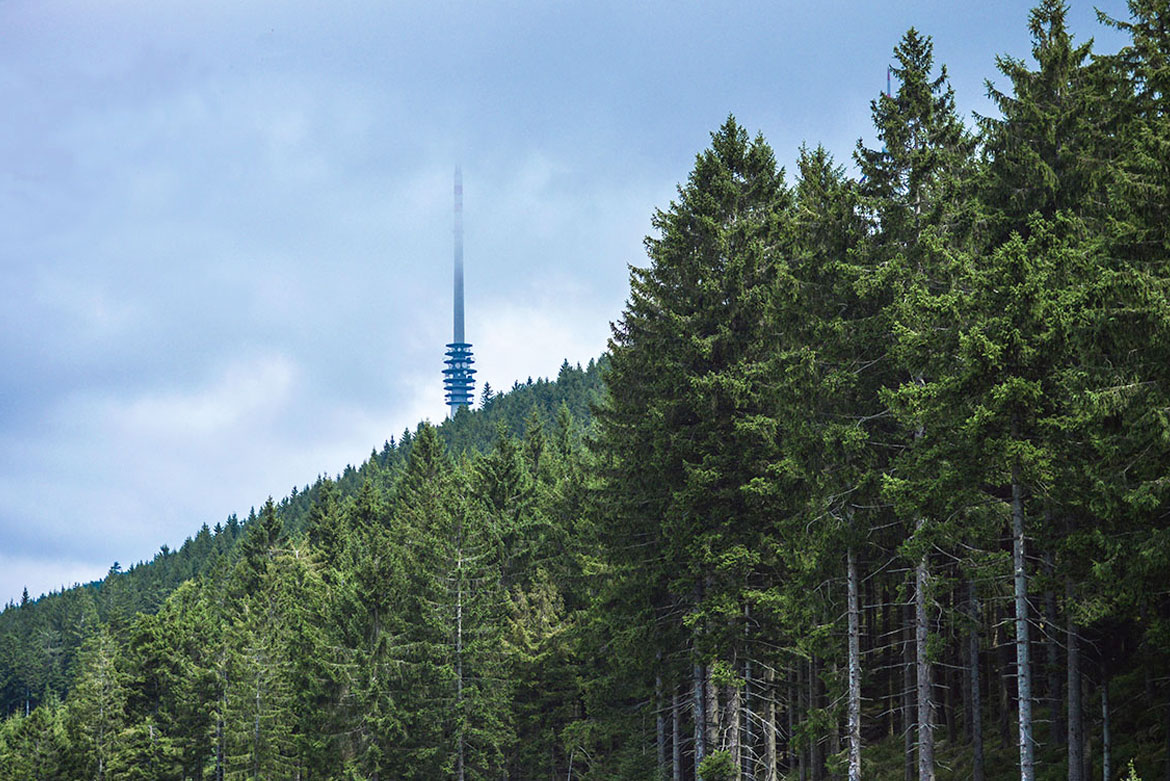 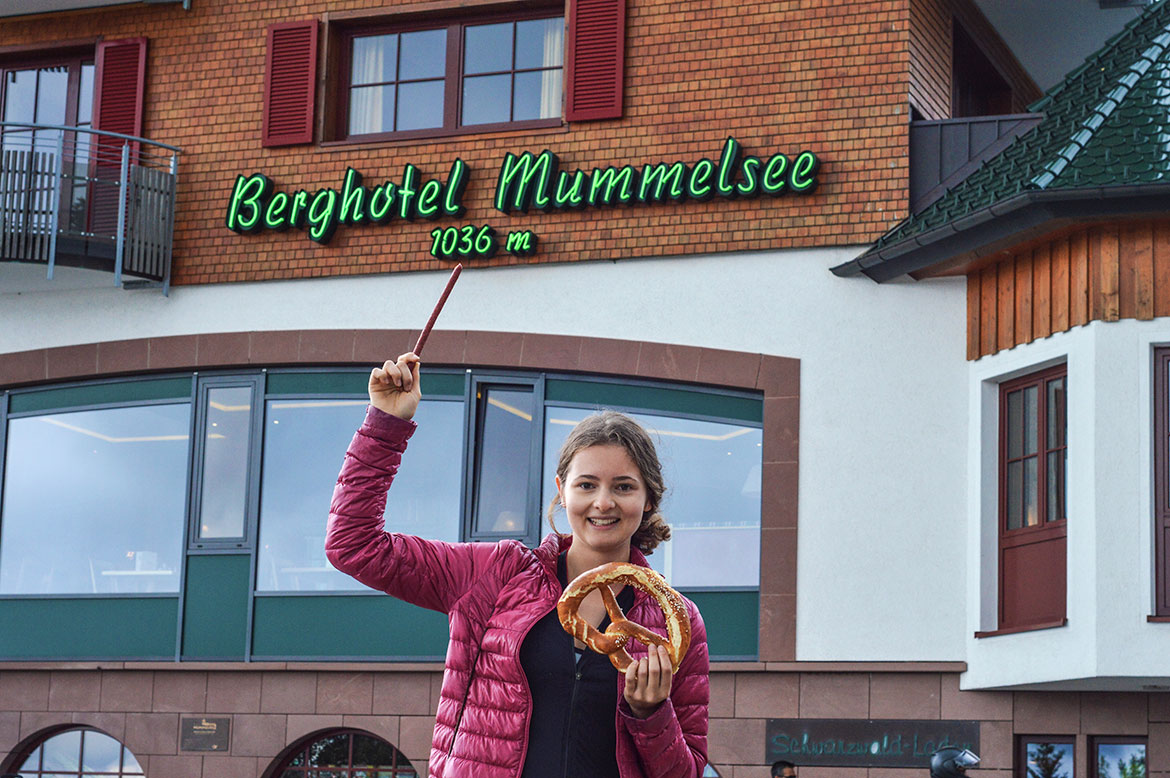 Celebrating her first ever mountain climb, Stef sneaked in a currywurst before setting off on what was to be a 35-kilometre descent, snaking through the mountainsides and foothills. Swooping down in perhaps some of the cleanest air to be inhaled in Europe, we were glad to have brought along some quality jackets. These were excellent, keeping the wind off during those long descents, when you’re not putting in much effort. 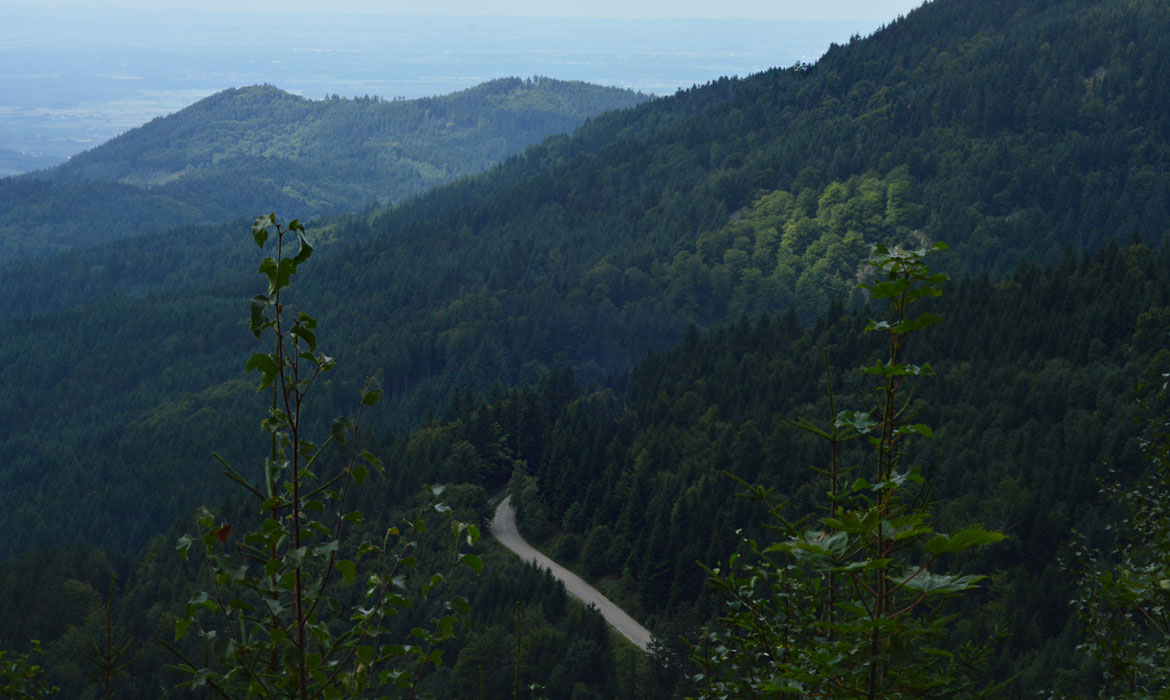 Cooling our brakes in Unterwasser, we took time to refill our bottles from a water wheel. As we made our way out of the Black Forest, and closer to flatter terrain, we decided to make an effort to consume some of the indigenous cake before leaving. With each village bakery seemingly out of stock, we continued on, rolling past extensive vineyards in Kappelrodeck before finally finding a flat white and a fork in Achern, where we bedded down for the final push. 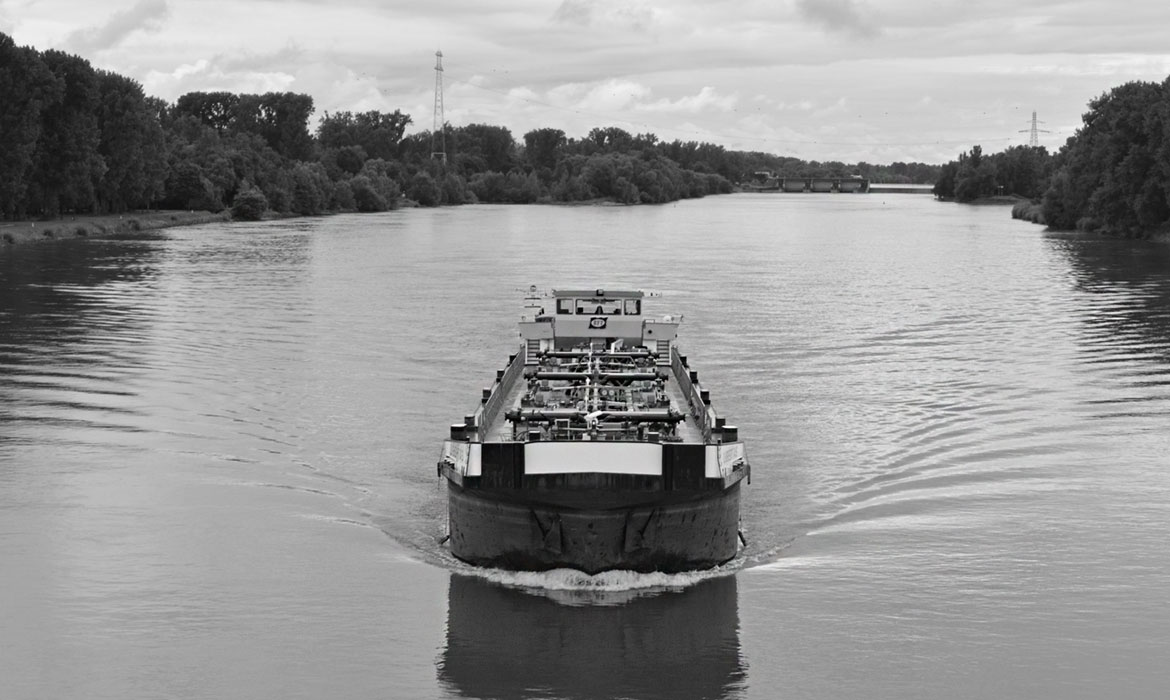 Waking to what could only be considered apocalyptically bad weather, we packed up our sodden tent, and attempted to cover every facet of our equipment with bin bags to keep out what water we could. Making use of the copious number of bike paths available, we found the river Rhine and followed it, past fields and finally into the industrial docks that marked Kehl. Checking into our final campsite, we were received with sympathetic smiles from the receptionist who, timidly and justifiably, pointed to the nearest drying rack rather than asking how the cycle was. Though only 35 kilometres from Achern, the small paths we had taken had deposited sufficient levels of sand so most of our clothing had to join us in the coin-operated shower. 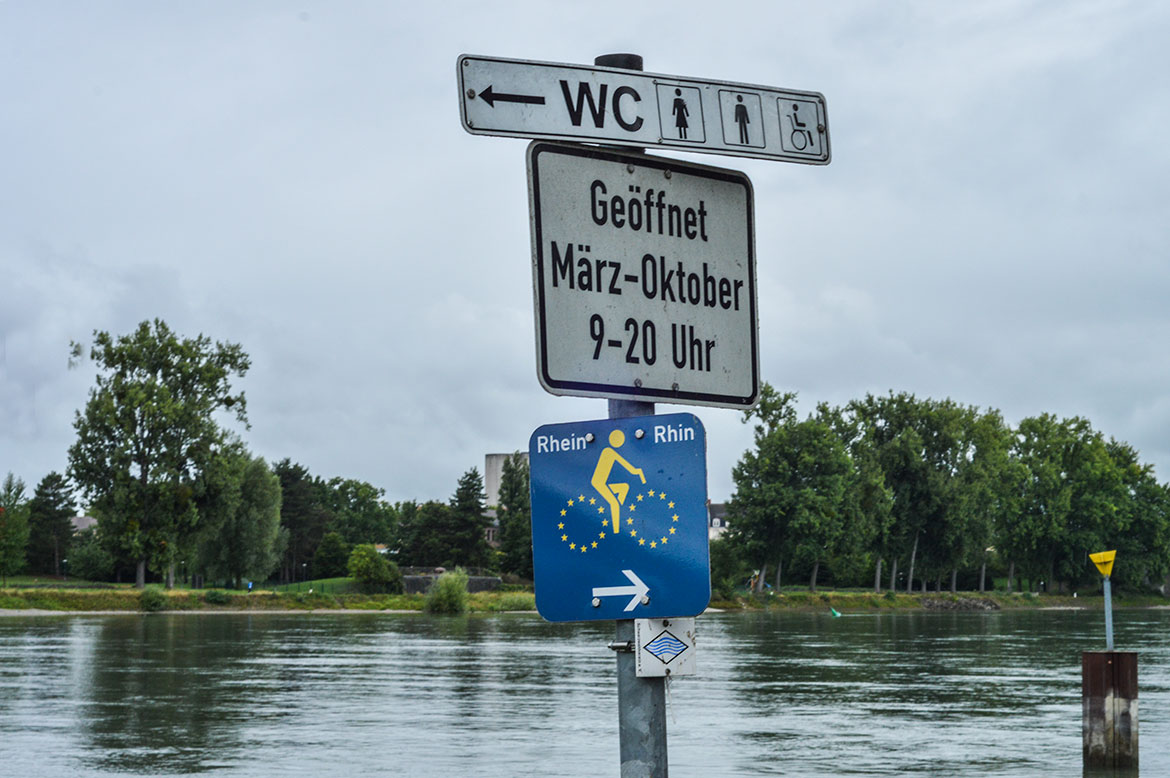 With getting to Strasbourg the simple matter of pushing our bikes across a footbridge and into France, we were content to sample the beans in a local café, warm up a little and contemplate the achievement. Stef noted that we’d made over 200 kilometres up some tough terrain with bikes weighted heavily enough to send them to the bottom of the deepest ocean. Still in fine fettle, we were impressed by the comfort of our Brooks Saddles, finding them an instant fit. Some things though were going to need a little refinement before our next trip, and leaving our tent to dry, a reprieve in the weather allowed us some time to walk around town. 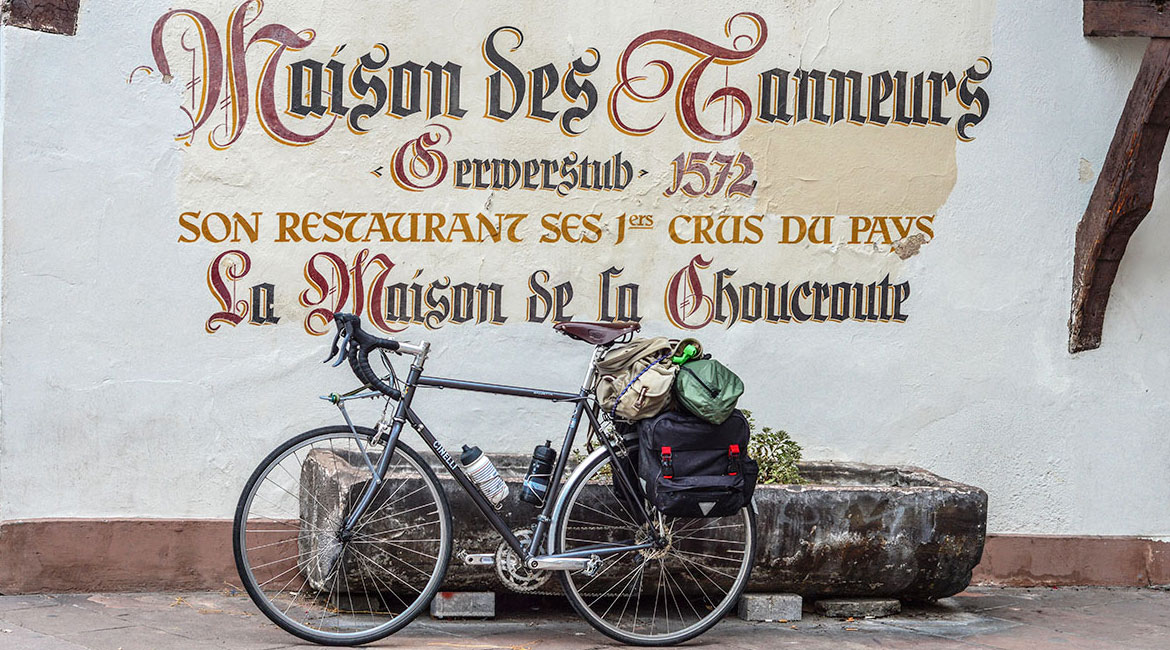 With our still wet kit rolled up and bus tickets booked back to Frankfurt, we walked into Strasbourg. Crossing the river marked a step change. With the Alsatians fiercely proud of their “Frenchness”, it was choucroute, not sauerkraut on the menu. Medieval frontages leaning insistently over the narrow cobbled streets, this European capital was a truly striking destination. The tricolore draped from every building, hitting France really brought home the huge cultural differences in short distances. With the entire journey made by bike, unsupported, this had been an eye-opener to just what is possible on two wheels, reinforcing that sometimes, cycling is more of a lifestyle than a sport… 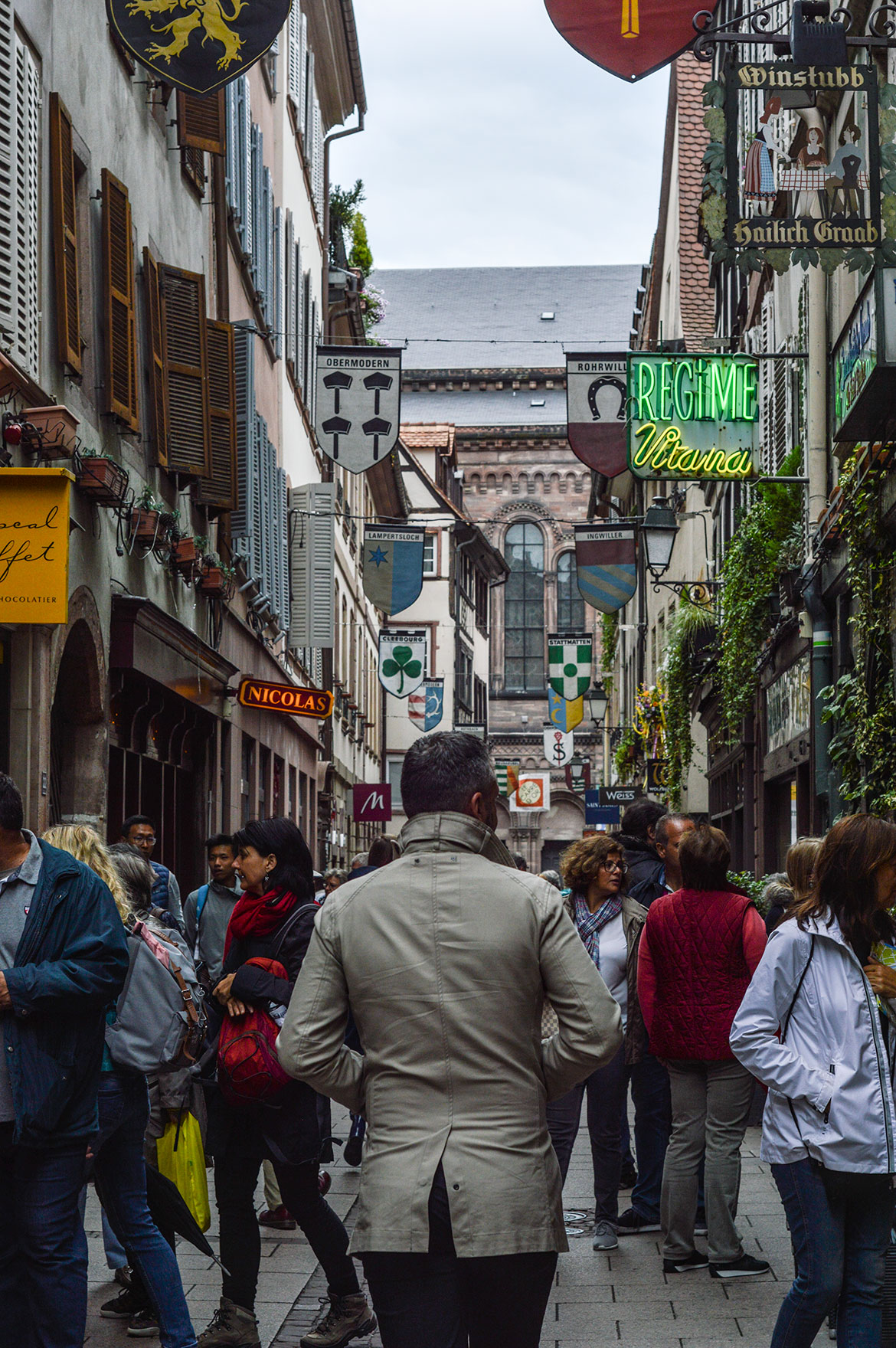 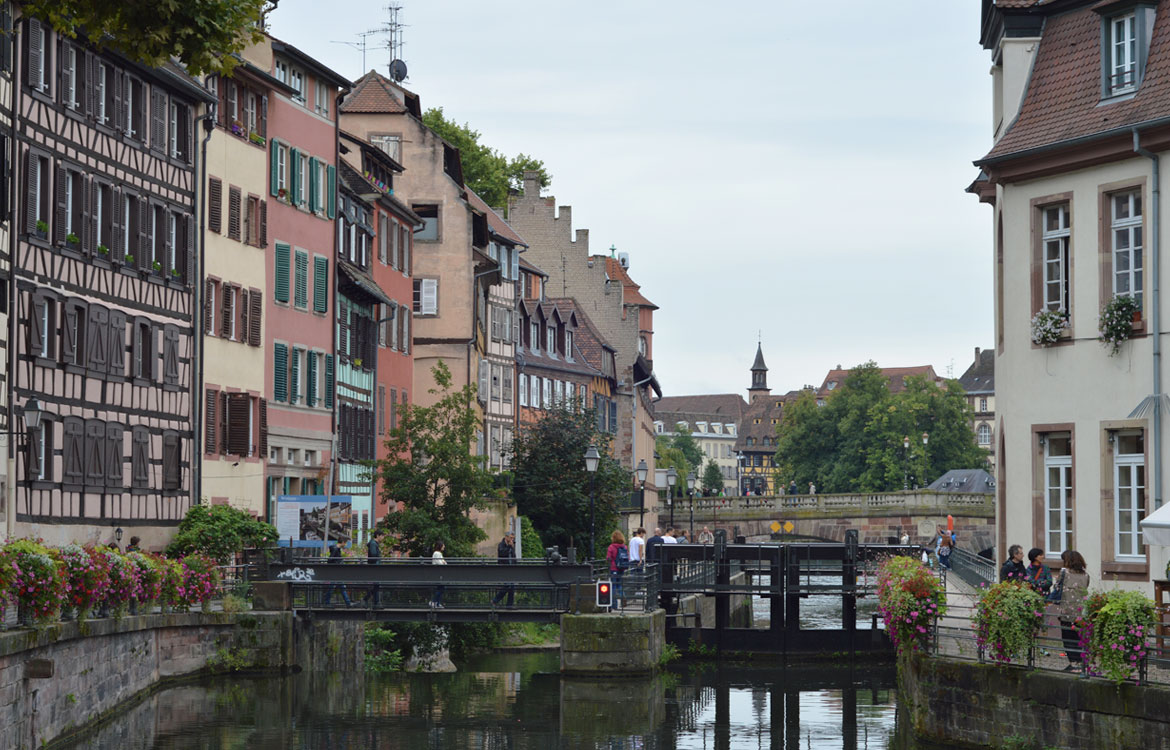