Here at Sigma Sports some of our most frequently received questions relate to bottom brackets, and in particular, choosing the correct option. As a result, we have put together this guide, outlining the differences between the bottom bracket standards, with an aim to provide some clarity on this notoriously confusing subject.

The bottom bracket is located within a shell found at the junction between the frame’s seat tube and downtube. A bottom bracket is made up of a pair bearings, located either side of the frame, through which the chainset axle is fitted, allowing it to spin freely.

Traditionally there was little choice when it came to bottom brackets, with variances limited to shell width, spindle length, and thread type. These days, however, it's not quite so straightforward, with over ten standards, each claiming to be better than the other, it's no wonder we are often at a loss. This article will take each variance, one by one, and discuss its key features and what to look out for when checking compatibility with your frame, and/or chainset.

One of the main reasons for this influx of bottom bracket standards is the popularity of carbon fibre frames. Many carbon frames, particularly those at the higher end of the price spectrum are compatible with only one specific bottom bracket type, decided by the manufacturer during production. Generally speaking, manufacturers have chosen to step away from traditional threaded brackets and use Press Fit designs on their higher end carbon and aluminium frames.

Ultimately which bottom bracket you require will be determined by:

This article will take each variance one by one and discuss its key features, performance benefits and the tools required for installation and removal.

The fact traditional threaded bottom brackets have been around for over two decades, yet still appear on some of today's top-end framesets speaks volumes about their performance and popularity. While more advanced designs have filtered into the market, many still like the simplicity and "creak free" reliability these brackets are renowned for.

Threaded bottom bracket shells have internal threading, with widths varying from 68mm to 100mmm, and in some cases, even wider. You must ensure you choose the correct width bracket to suit your chainset; the chainsets spindle width will determine the bracket required. The most common spindle diameter is 24mm, as found on many Shimano and SRAM offerings, however, the less common, dated, 17mm square taper variant also exists. 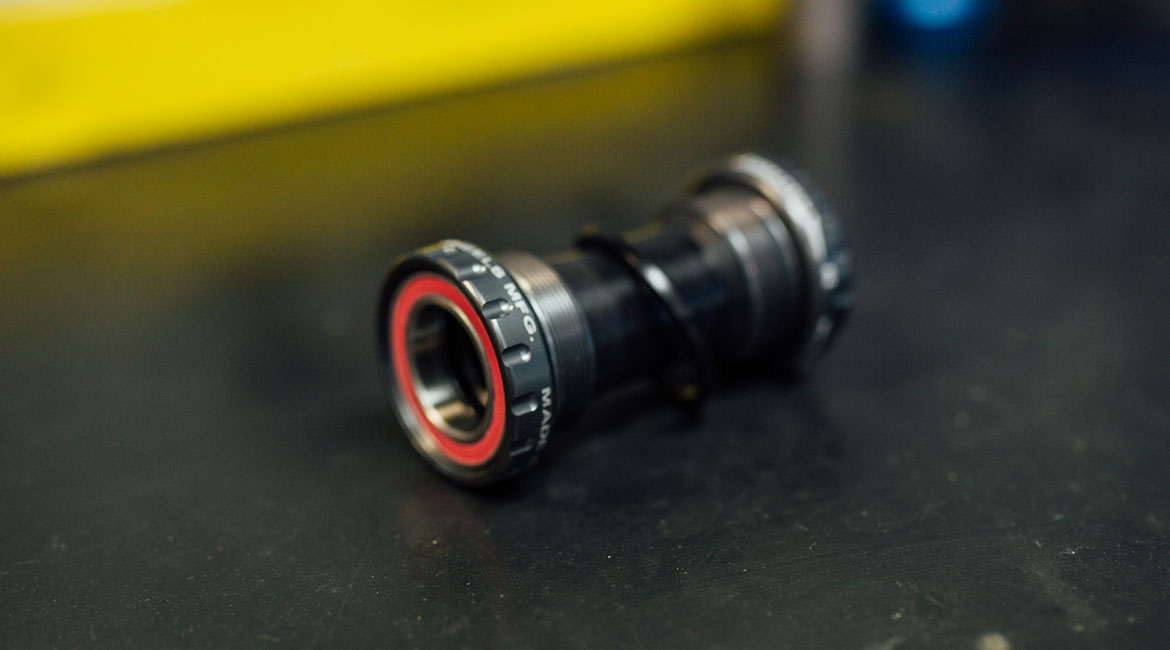 There are a few different types of threaded brackets, namely Italian and British (also called BSA or BSC), with the latter being the most common. British variants use left-hand threads on the drive-side, whereas Italians use a right-hand thread on both sides. Generally speaking, if your frame is less than 15 years old, it will more than likely have a British bottom bracket.

The benefits of a threaded bottom bracket include compatibility with the largest range of chainsets, easy home maintenance, and longevity, they are, however, often heavier than more advanced options such as the BB30.

BB30 bottom brackets were first introduced by Cannondale in 2006 to allow the use of chainsets with large 30mm spindles and oversized bearings. The BB30 is compatible with frames with no internal thread and large 42mm diameter shells, with mountain bikes utilising a 73mm wide shell and road bikes narrower at 68mm.

With BB30 brackets, a cartridge bearing is pressed straight into the frame shell, and guided into its correct location by a built-in snap-ring. 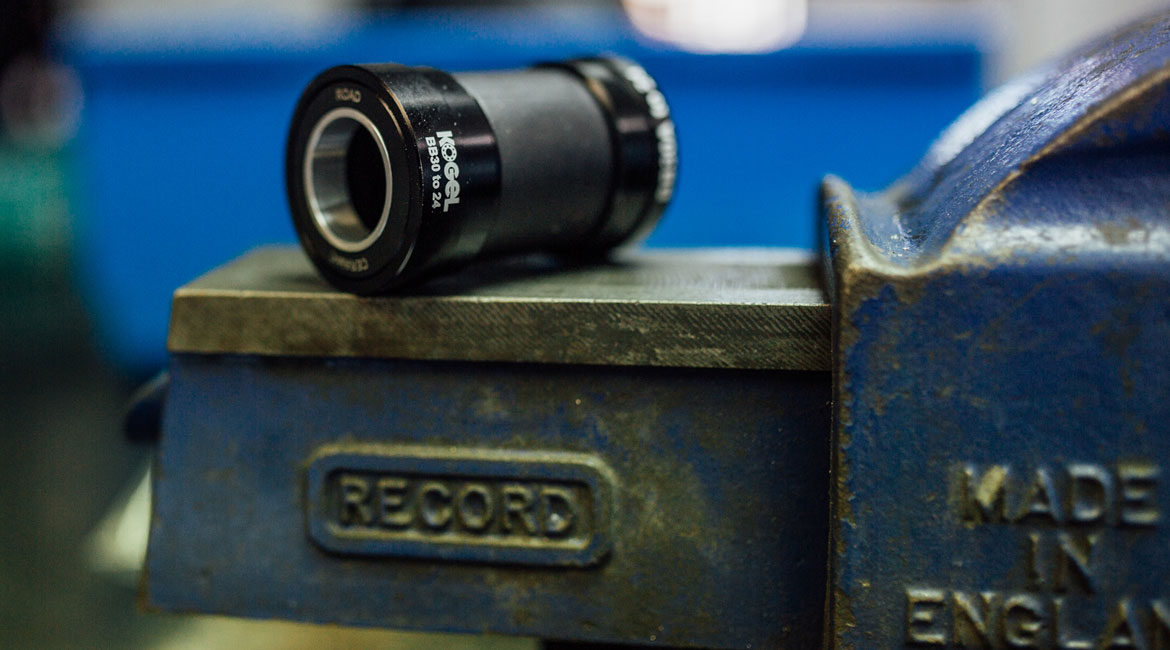 Using simple adapters, BB30 frame shells can also accept non-BB30 chainsets. These reducing bushings are relatively cheap and can simply be popped into the cartridge bearing to reduce its diameter down to fit the smaller spindle sizes found on SRAM GXP and Shimano Hollowtech II Chainsets.

The key benefits of the BB30 system are its low weight and 30mm spindle diameter, which provides high levels of resistance against axle twist, in-turn greatly increasing stiffness.

The PF30 standard was introduced by SRAM after the release of the BB30. Similar to the BB30, the compatible frame shell width measures 68mm on road bikes and 73mm on mountain bikes, however, its diameter is larger at 46mm. 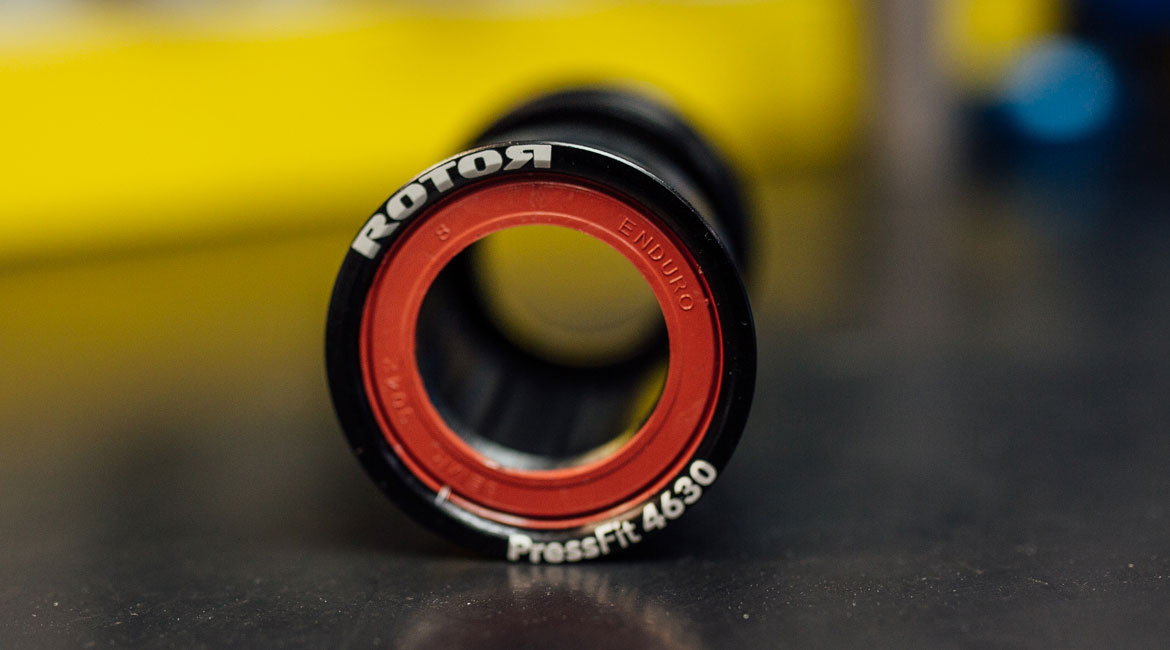 Aluminium or plastic assemblies hold the cartridge bearings in place, these are pressed directly into the frame, with their machined outer lip locating their position by stopping against the frames shell.

The PF30 is designed around chainsets with a 30mm spindle but can be adapted to accept 24mm axles using reducing bushings.

Designed around a threadless 41mm diameter frame shell, these brackets use bearings similar to those found in zero stack headsets. The bearing assembly is pressed directly into the frame, using a lipped edge to position itself correctly against the frame shell face. 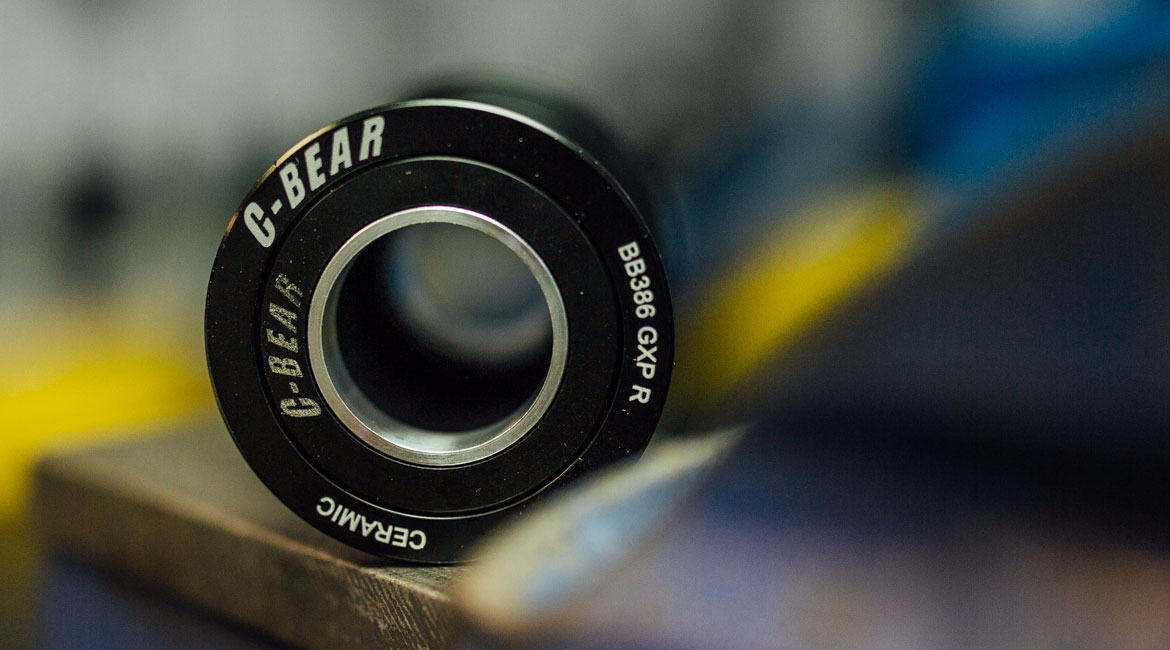 The numbers following the "BB" in the name refer to the frame type each bracket is designed for, with 86mm pairing with road bikes, 92mm suited to mountain bikes and 121mm used in "fat bikes". All three options work with 24mm two-piece chainsets such as SRAM GXP and Shimano Hollowtech II models.

The BB90 and BB95 were introduced by Trek in 2007 and have a very similar design to an integrated headset. The bearings aren't housed within an assembly, instead, the frame is moulded to allow the bearings to be pressed directly into it. This system utilises two-piece chainsets with 24mm spindles and can be found on Treks higher-end offerings as standard. 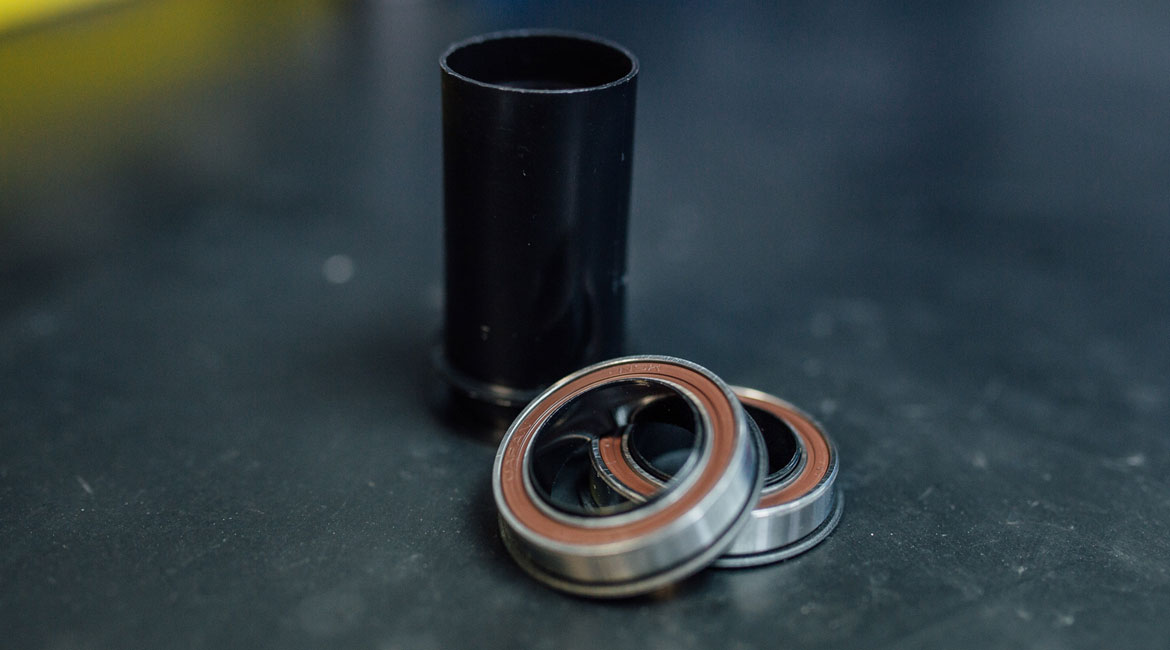 The BBright is Cervelo's blend of the BB30 and PF30 designs, adapted to work efficiently with their own frames. The bottom bracket shell is extremely wide, but is not centered to the middle of the bike, instead, it is offset to accommodate the frames large left-hand chainstay. The total shell width is 79mm, however, 45mm of that sits to the left, leaving only 34mm on the right-hand side. 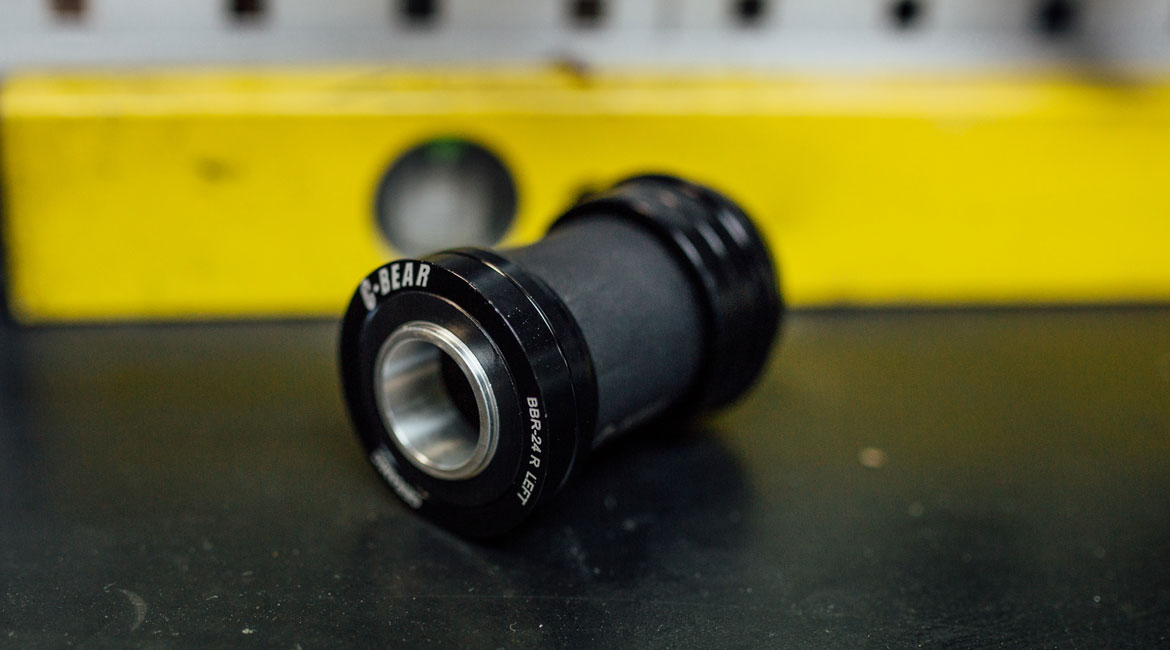 BBright systems come in two variants, the first of which uses a 42mm internal shell diameter and works identically to a BB30 setup. The second is more similar to a PF30, with an internal diameter of 46mm. Due to the unusually wide 79mm frame shell, extra care must be taken when choosing your chainset to ensure compatibility.

The BB386 EVO is also very similar to a PF30, using an internal frame shell diameter of 46mm and pressed-in bearings, however, its 87mm shell width differentiates it.

It is compatible with most modern chainsets, with adapters available to allow the fitment of Shimano, SRAM and Campagnolo 24mm variants.

With stiffness directly correlating to cross-sectional size, the 87mm wide BB386 EVO theoretically has the greatest levels of stiffness on offer.

Combining the benefits of a threaded bracket and a PF30, the T47 is one of the newest standards available. Designed by Chris King and Argonaut Cycles, this bracket uses the same oversized bearings and 46mm internal diameter found on a PF30 but threads directly into the frame like a threaded bottom bracket. The result combines of the stiffness of an oversized spindle and bearing, with the reliable "creak free" performance threaded brackets are famous for. 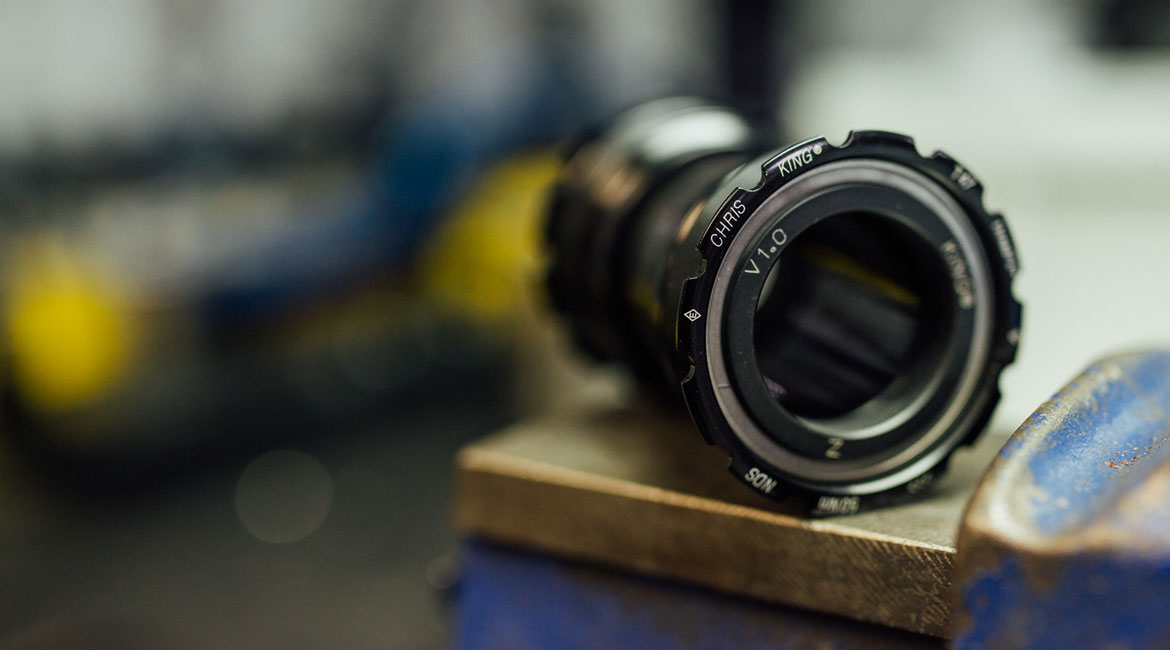 The long and short of it

Whilst we have established that your frame and chainset play a key role in your bottom bracket 'choice', you still have control when it comes to the quality. With a range of brands offering what is essentially the same product, it can be tricky to finalise your decision, particularly given the large price variances between different models. Bottom bracket prices differ depending on the materials used, weight, efficiency and longevity.

With seasoned cyclists chasing incremental gains and the bottom bracket directly affecting how freely the chainset turns, a good quality bottom bracket is a component that needs considering for those looking to improve their bike’s performance. Higher end offerings are however not solely aimed at the racing market. Commuting can be an unpredictable affair, with poor conditions placing greater strain on your bike's moving parts. In this instance, a durable, sealed bottom bracket won’t only improve the ride quality, but will also ensure a greater life expectancy. Theoretically a premium bracket will actually work out more cost effective in the long term, as replacing cheaper variants year in, year out, soon adds up.

We would always suggest opting for a sealed bottom bracket. As the name suggests, the bearings are sealed to ensure mud, water or dust are kept on the outside, preserving smooth performance no matter the external conditions. For those craving uncompromised efficiency, ceramic bearing variants are the crème de la crème of bottom brackets. There are many advantages to ceramic bearings over standard steel offerings. The Silicon Nitride that is used to construct ceramic bearings can be machined to a far greater accuracy, increasing durability and reducing any manufacturing imperfections. This essentially allows the balls to be rounder and smoother than any other metal available, making them roll faster, with minimal resistance, resulting in increased performance out on the road.

Whether it’s building a new bike or invigorating an existing drivetrain, choosing the correct bottom bracket is a key consideration and one that plays a pivotal role on your bike.