Sigma Sports is proud to be supporting the RAAMIN4Charity team as they take part in one of the most gruelling endurance events on the planet, the Race Across America. The team is made up amateur cyclists, who will be taking on 3,070 miles, 180,000 feet of climbing, through 12 States, coast to coast across the USA in 6 days, non-stop, with the aim to raise £100,000 for the Aplastic Anaemia Trust and Great Ormond Street Hospital.

Phil Brown, one of the RAAMIN4Charity riders, gives us a unique insight into what it takes to prepare for this ultra endurance event... 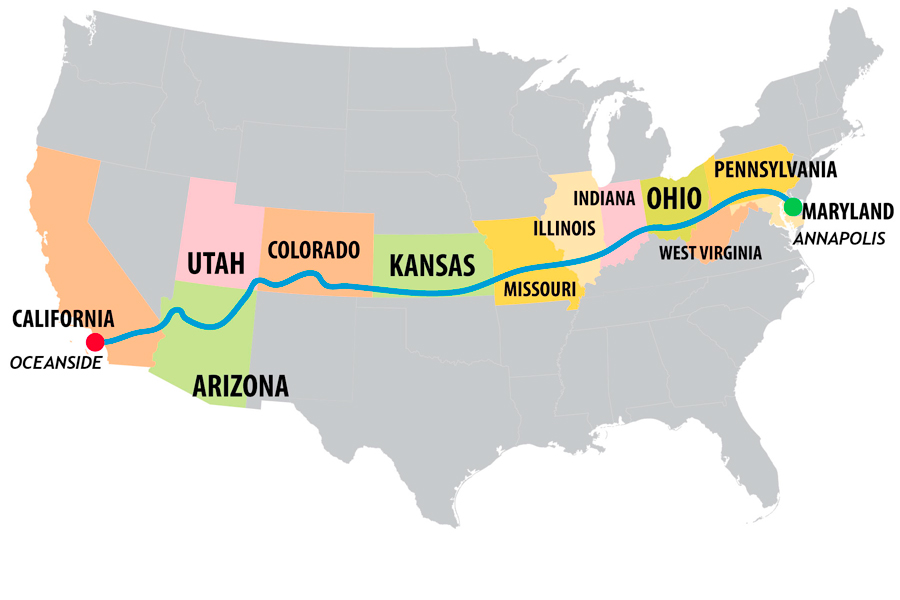 Having ridden (and won!) the Revolve24 race at Brands Hatch circuit last September, we decided another non-stop test event was necessary as part of preparations for the Race Across America (RAAM).

Using the bank holiday weekend at the start of May, we hired a house near Brockenhurst and decamped to the New Forest with all manner of bikes, kit and associated paraphernalia to test our pull strategy for riders and watch system for crew in advance of the race itself. 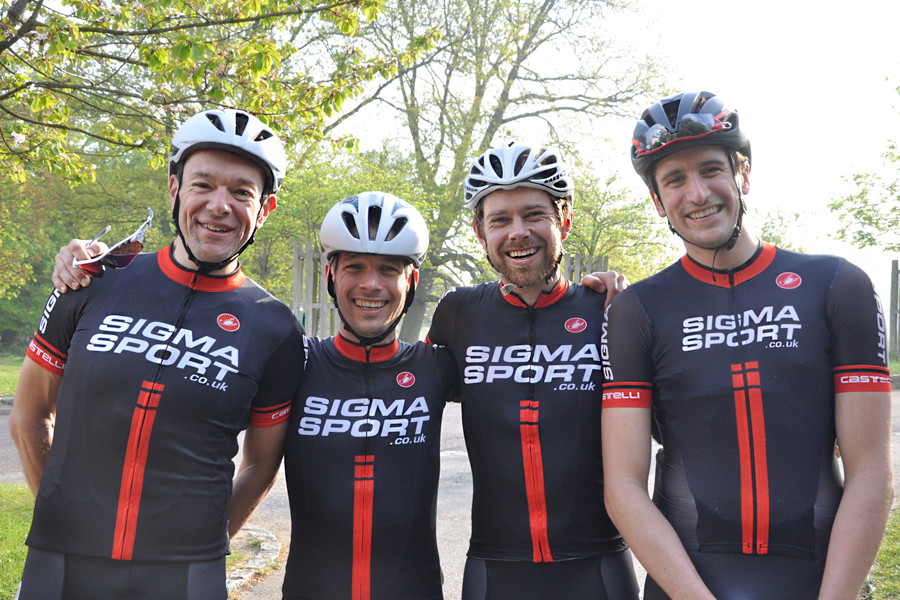 The first thing we became aware of was how much kit we took with us; in a large VW Transporter, it’s not so bad, but translate that to checked luggage on an airline and it was apparent we’ll need to be really selective about what we really need for this trip across the States – not only in terms of getting it there, but then ferrying it from the west to east coast.

Nevertheless, on the bank holiday weekend most of it was necessary given we experienced glorious sunshine (if lacking in warmth), frost in the early mornings, rain for the second night and a pretty mean headwind for the last 24 hours. In the boot were a set of very fine Trek Madone 9.9 Road Bikes which are proving superb to ride in a variety of conditions, unlike many aero bikes. 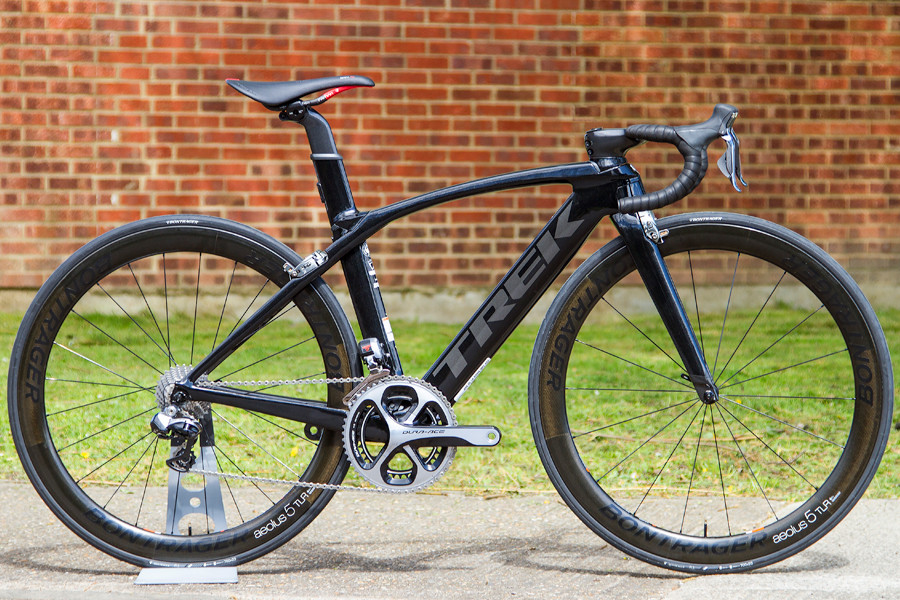 Friday night was an opportunity to run through a host of logistics issues with our crew and finalise thinking around nutrition, vehicle shifts, etc. The challenge of planning a non-stop rotation of drivers, navigators, mechanic and physios across a 40ft RV doing four-hour leapfrogs and two supporting people carriers sticking with the riders on the road is almost up there with planning a trip into space! This is further complicated by certain individuals having concerns over driving “the mothership” as the RV has affectionately been nicknamed.

Saturday morning was an opportunity to practice changeovers; Keith (our mechanic, all-round good egg and tweed cap model extraordinaire) brought his SeaSucker bike racks for us to try – we’re planning to use them in the States as they stick to any vehicle in any location thus provide us with plenty of flexibility. 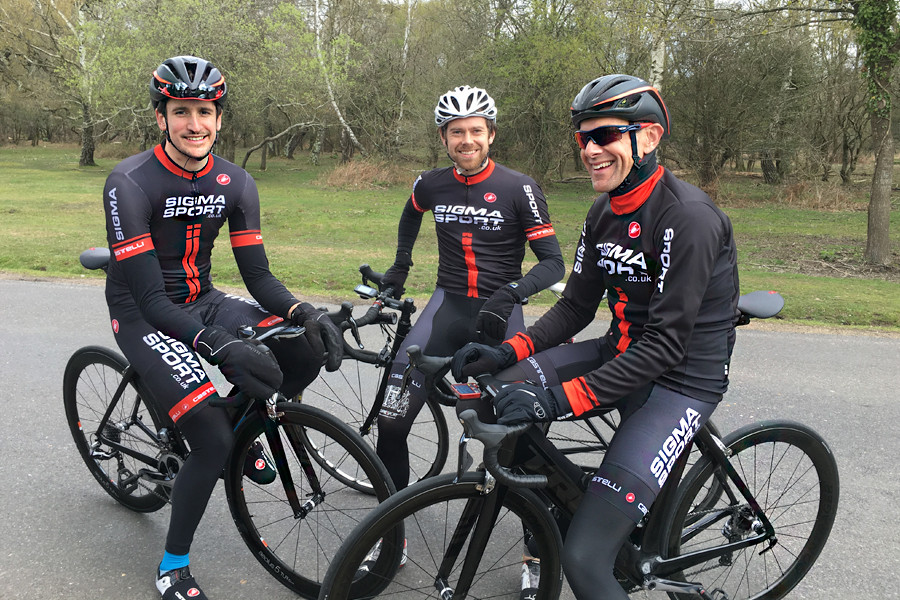 It quickly became apparent that the distance within the changeover zone defined in the rules soon disappears when a rider is approaching at speed, so we revised the strategy to ensure the finishing rider stops by the follow vehicle rather than 250m further down the road; of course, slowing down is obviously an option but not one we wanted to consider at this stage!

At 12:00, we started the clock on our 48-hour test, riding from the village in which we were staying to Beaulieu and back – roughly a 30-minute ride encompassing a punchy hill, a couple of drags, a decent section with a tailwind but then a nasty return into the wind, which increased in strength to 40 kph over the weekend. 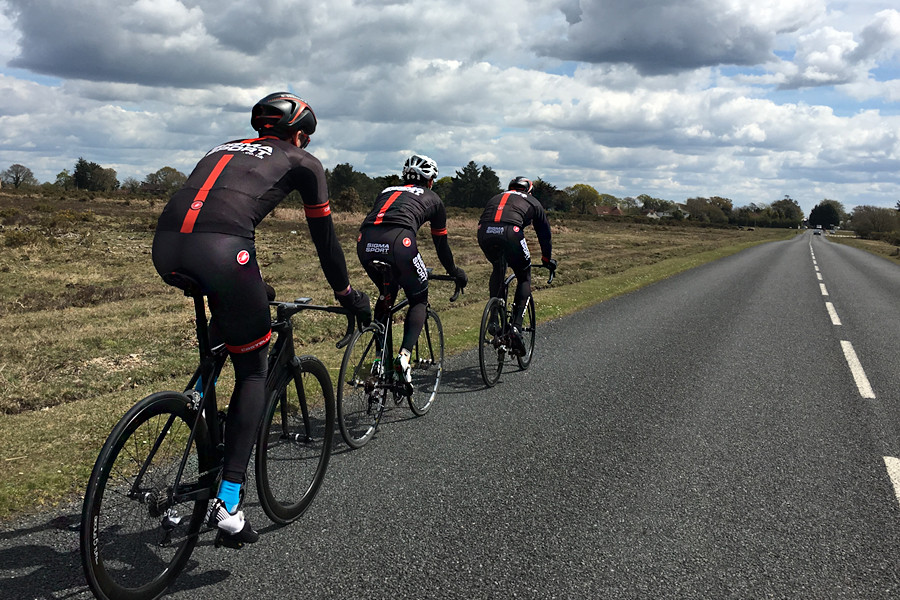 The plan was to ride to our race schedule and integrate physio, food, ‘hygiene’ and rest on a continual loop over the weekend. Through the night we decided to ride in pairs for safety reasons, side-by-side to ensure there was no drafting; the New Forest’s unlit roads tend to hold plenty of surprises in the form of wandering horses that can come upon you very quickly in the pitch black at 40 kph! 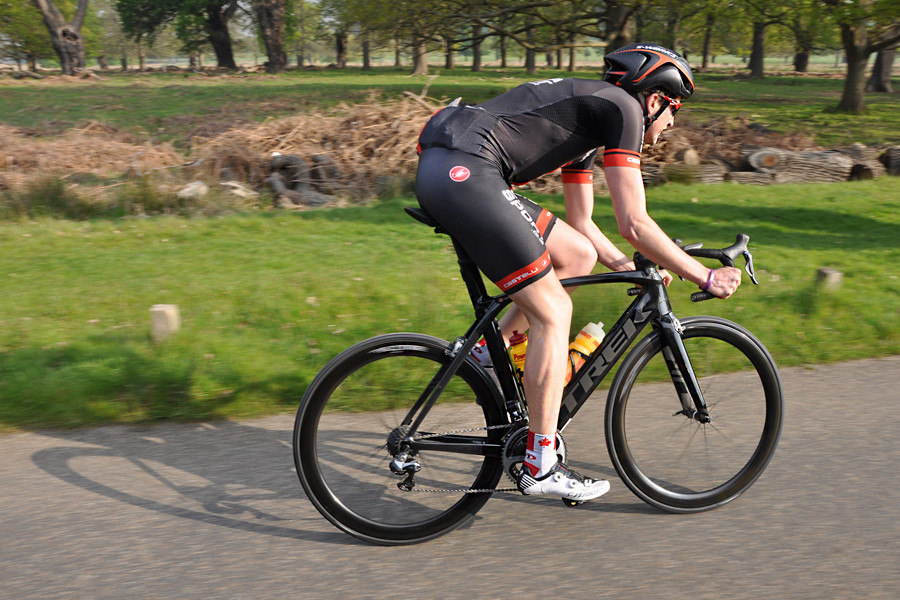 One of our riders, Adam (who is based in Finland), couldn’t make it so I developed the schedule with me riding on my own, giving Dan and Sam the chance to ride together through the night so they had each other to keep spirits high – their chat and banter are about as bad as each others’!

They also had the midnight graveyard slot which, whilst they claimed was the worst time to be riding for their circadian rhythms (seriously?!), meant they could eat at a normal time in the evening and avoid the Baltic frost.

By comparison, I rode as Billy-no-mates through the coldest part of the night, but in truth, I had the sunrise, which has to be one of the best parts of the day. As a long-term sailor, I have always loved the dawn watch – there is something hugely invigorating about the passage between night and day. Sunday morning definitely delivered; a fantastic, deep-red sunrise appeared over the New Forest, with lightish winds carrying the sounds of the early morning birdsong.

I caught glimpses of muntjac on the roadside and had a badger scuttle across the road in front of me – definitely not everyday occurrences. We’re hoping this is going to be one of the lasting memories of RAAM, the views of America you would not ordinarily get. We caught some great videos showing the range and power of the Exposure Lights which were definitely the kit you wanted on the front of your bike through the night.

The rest of Sunday and Monday pretty much rolled on with a metronomic pattern; ride, physio, eat, wash, sleep, repeat! We all started to adapt to the sleep pattern of grabbing a couple of hours, the physios worked their magic to keep legs feeling strong and the crew remained resolutely stoic as they took their turns to trundle behind us through the dark night at a relatively slow speed which tends to test concentration levels. 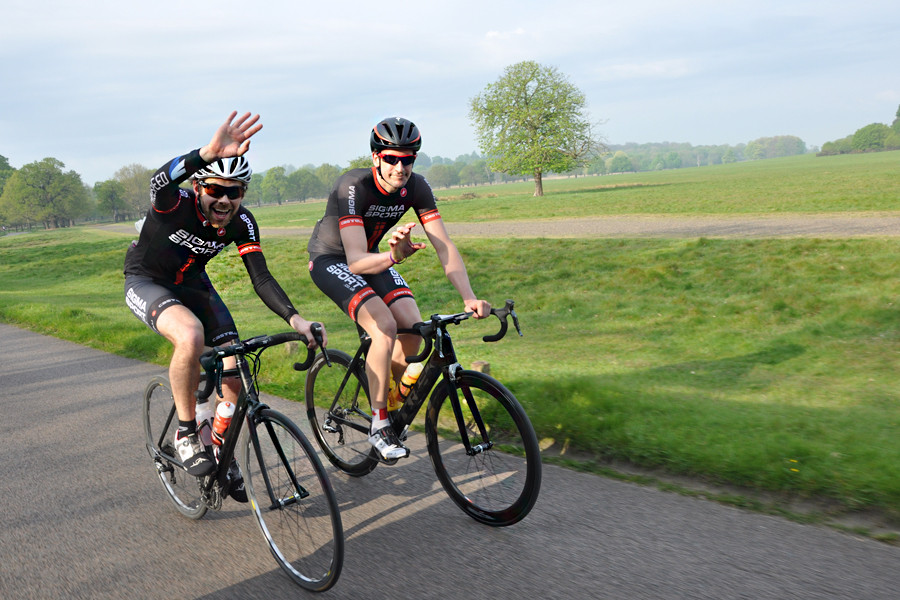 All three of us maintained an even pace throughout the 48 hours, clocking pretty much identical times with each stint. As the rain started on Sunday evening, there was even an opportunity for a little motor pacing behind one of the crew vehicles using our radios to communicate between rider and vehicle for pace change. Sitting on a Discovery’s bumper at upwards of 45 kph in the dark avoiding the headwind was definitely a mood lifter – though we obviously can not motor pace during the race rather, unfortunately.

Dan, Sam and I rode the last six hours together, initially through fine but sticky rain before it blew through leaving us with the mother of all headwinds. After that amount of riding, the headwind was a decent challenge as much for the head as our legs – the ability to suck it up and carry on because, well, there’s no other option! The bikes continued to be a revelation; slicing through the air, the IsoSpeed Decoupler really does work and provides a degree of comfort that a bike like this doesn’t deserve to have. 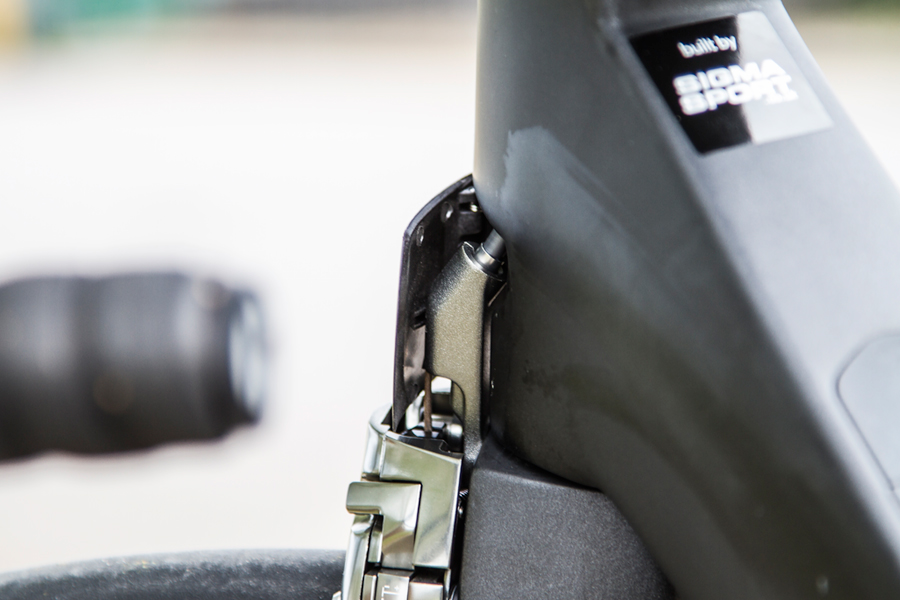 It was definitely a really good weekend; we learned a lot and aside from sticking a decent chunk of mileage in our legs, we had a good time developing the riders and crew into a single team. Tuesday in the office was a jaded affair – I think all three of us would have preferred to continue riding! Roll on 18th June... 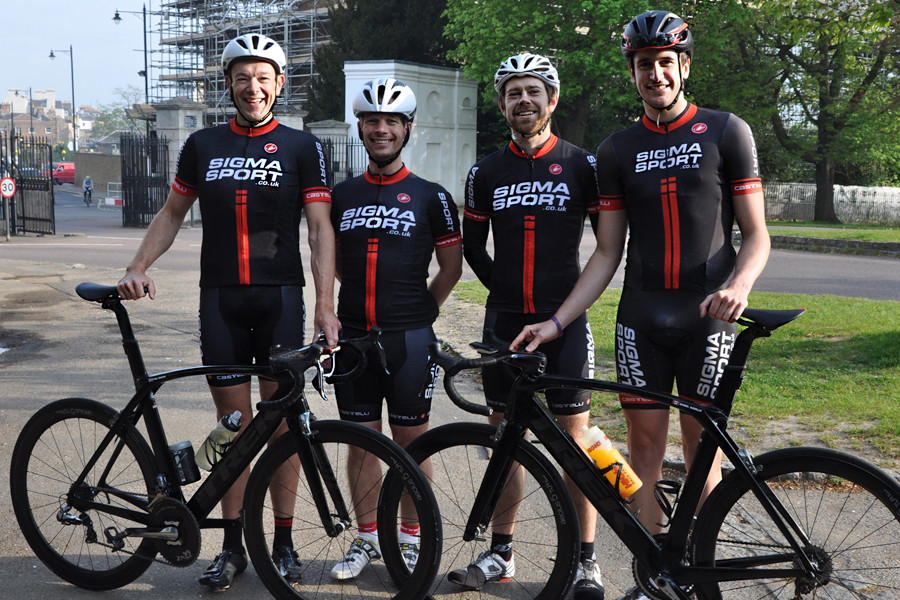 Find out more about RAAMIN4charity and make a donation to this fantastic cause.