Setting up shop in the heart of Prague, Festka represents an anomaly in the modern cycling industry. Inhabiting an elite, exclusive, and artisanal corner of the market, this small team of dedicated cyclists are entirely committed to making the best possible frames not just for you, but with you. Their offerings can be found adorning double page spreads in magazines and featuring in glorious bike galleries. When extending an invitation to visit their factory and see where it all happens, we jumped at the chance.

Touching down in Prague and walking around the historic city centre, it wasn’t immediately apparent that this city was producing some of the world’s most technically advanced luxury frames. With its tightly packed streets leading into grand boulevards, interspersed with tram lines and cobblestones, the palatial grand-standing of Prague lent it a sleepy reluctance - hardly the place for cutting edge frame manufacturing? Appearances can be deceiving. Tucked away on a residential street east of the river, half way up a cobbled street, we weren’t anticipating stopping, let alone the words “here it is.” 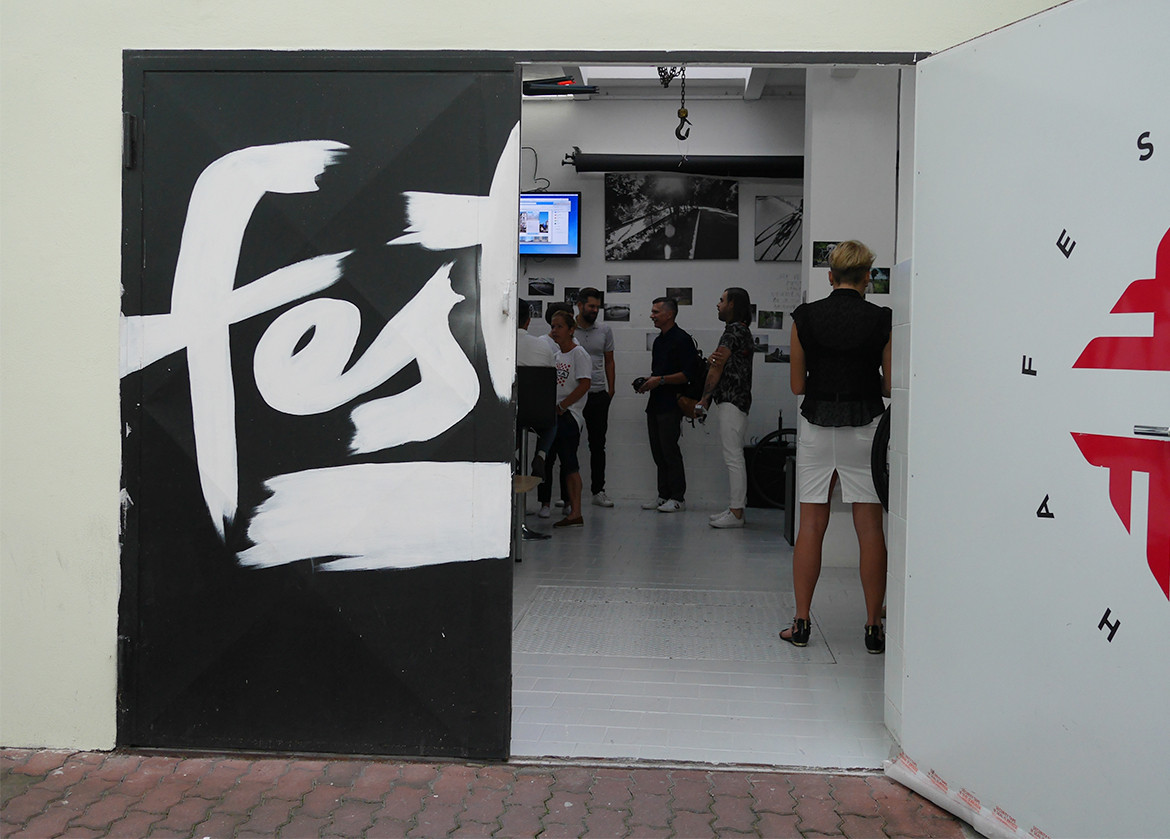 A small funneled courtyard channeling you towards two iron doors already cast wide in anticipation, stepping into the Festka workshop is not unlike stumbling across a secret hoard. Bike paraphernalia hanging from the ceiling and walls, a well-tooled assembly area and mechanic’s corner compressed into an L-shaped room, this wasn’t space age - it was personal. 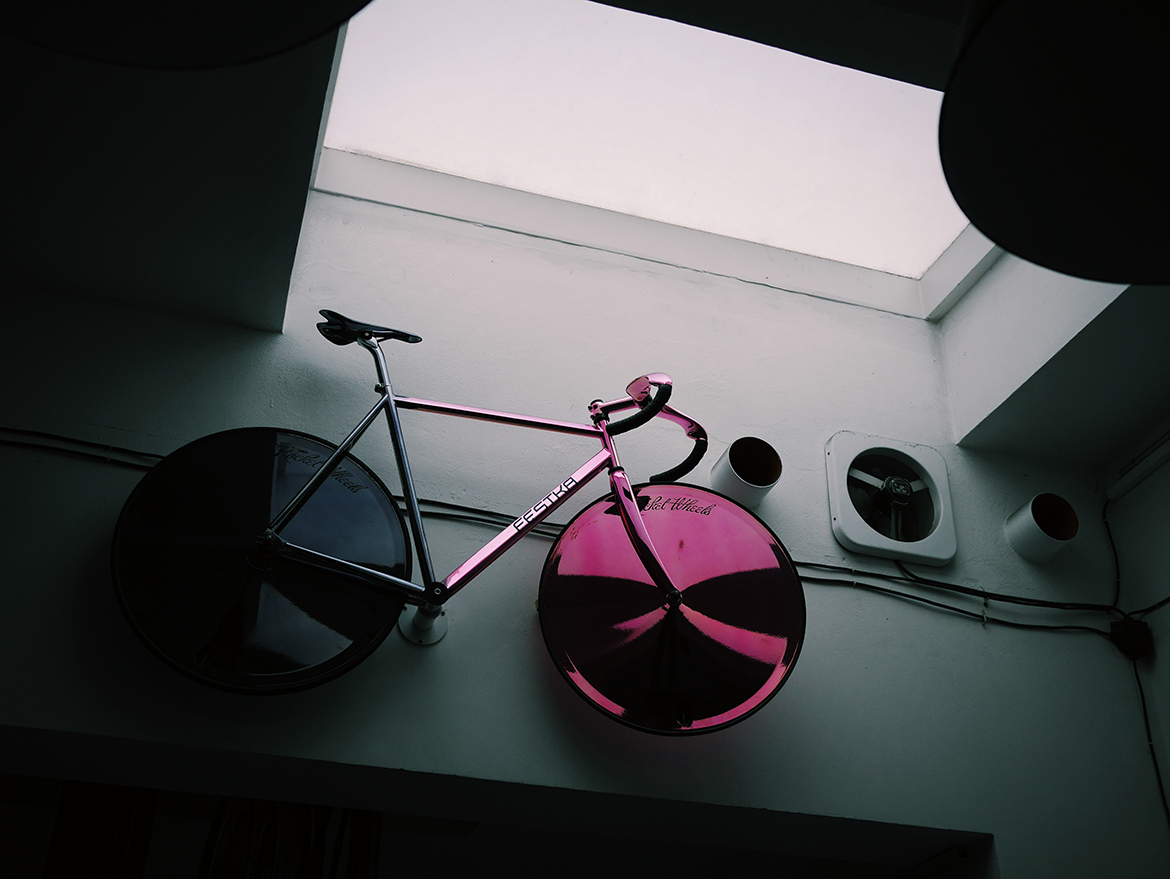 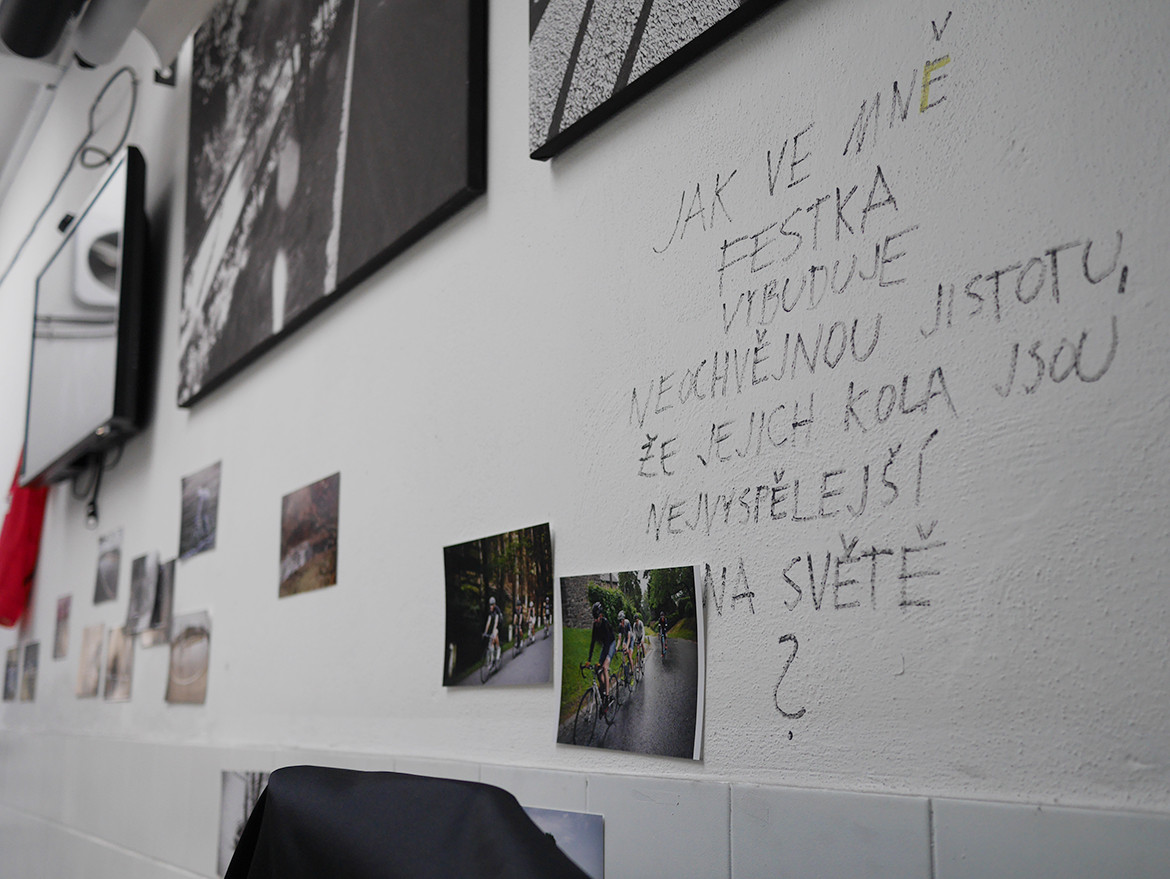 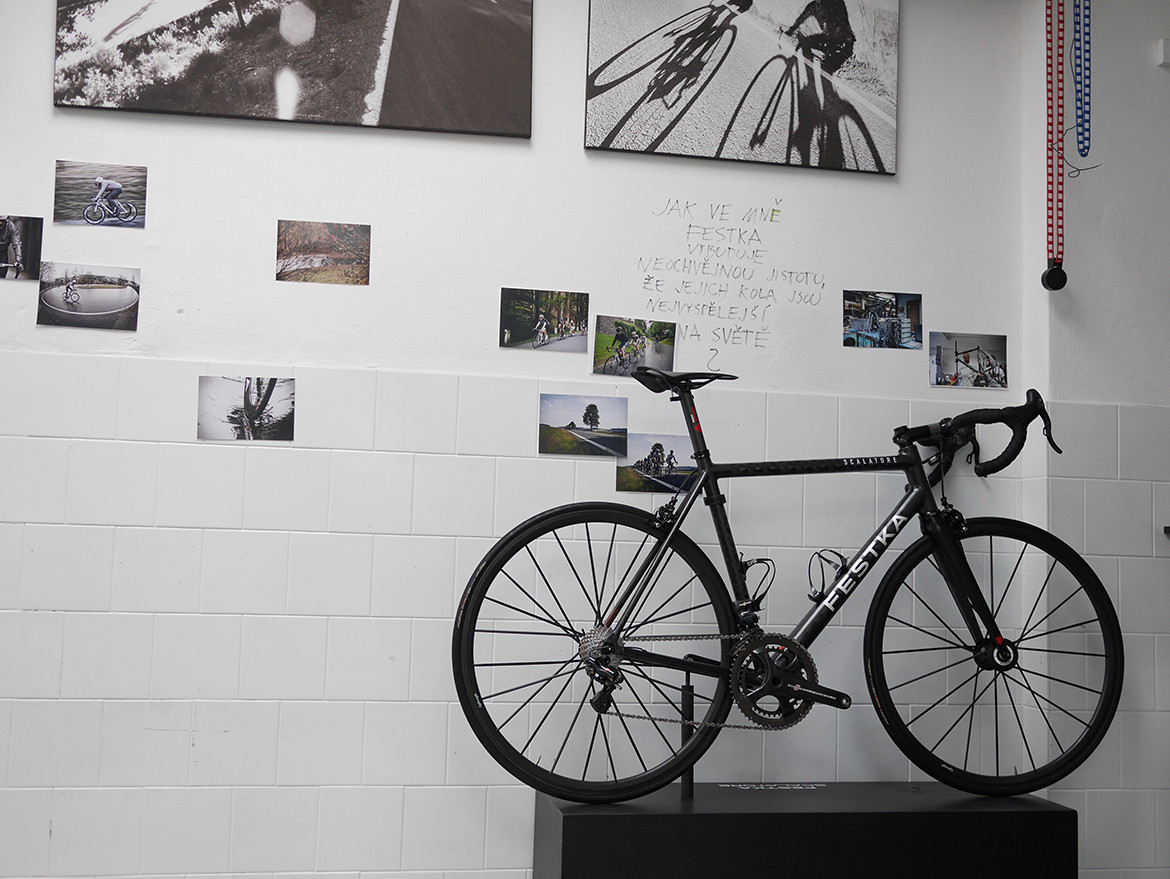 Talking us through the assortment of tubes, frames, machines and built bikes, what became apparent quite quickly was the sheer passion involved with this team. With relish, Michael, founder and product manager, talked us through the latest release and biggest headline, the Scalatore. Weighing just 740 grams, thanks to a pared back tube construction, this frame is designed for all out hill climb romps. With carbon dropouts keeping weight to a minimum, and clearance for 23mm tyres exclusively, this bike is made to point to the summit and surprise you with how easily and quickly it gets there. With every possible gram shaved, thanks to the ability to opt for an integrated seatpost, and pick each strand of carbon fibre used, it’s clear that Michael owns this project, and with each creation, simply wants to make a frameset he would want to ride. As a former team mate of Bradley Wiggins, with a long professional career in Italy, we’re quite sure that Michael knows exactly what’s needed when going fast is concerned. 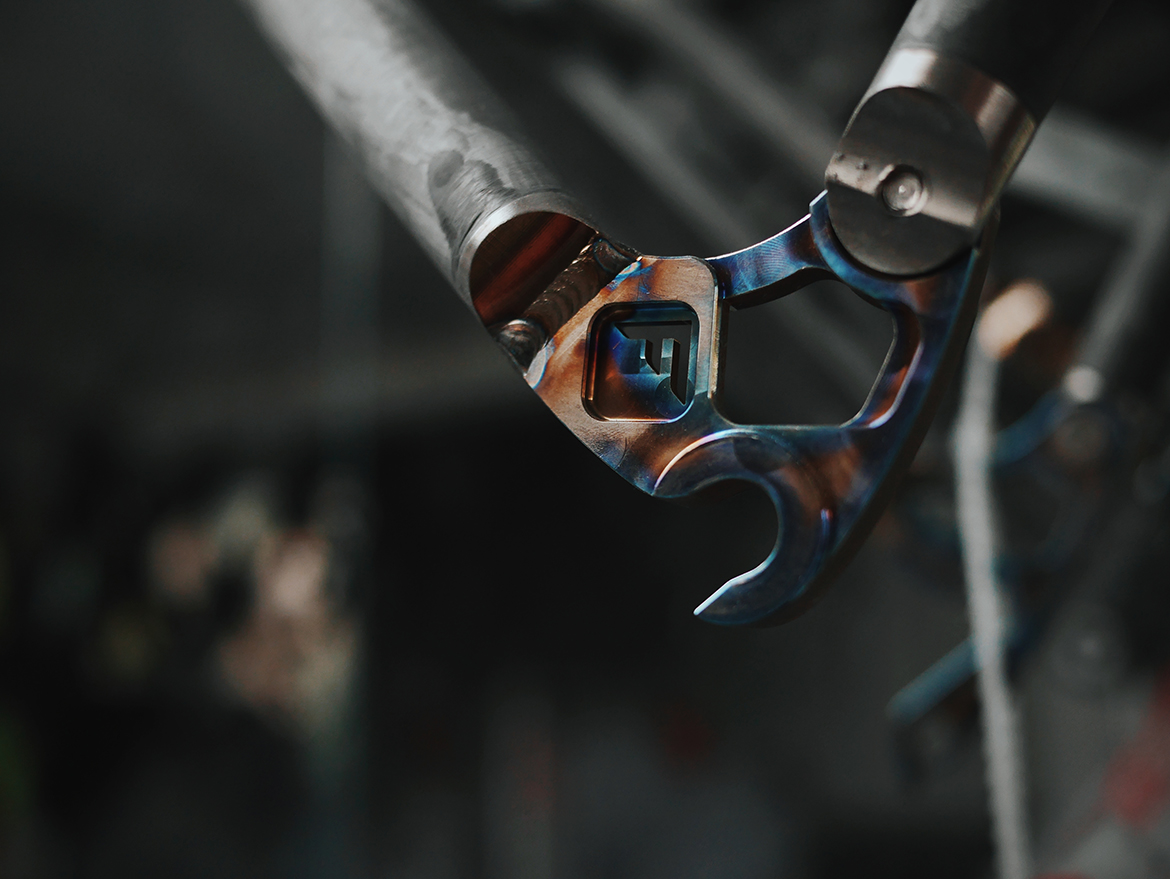 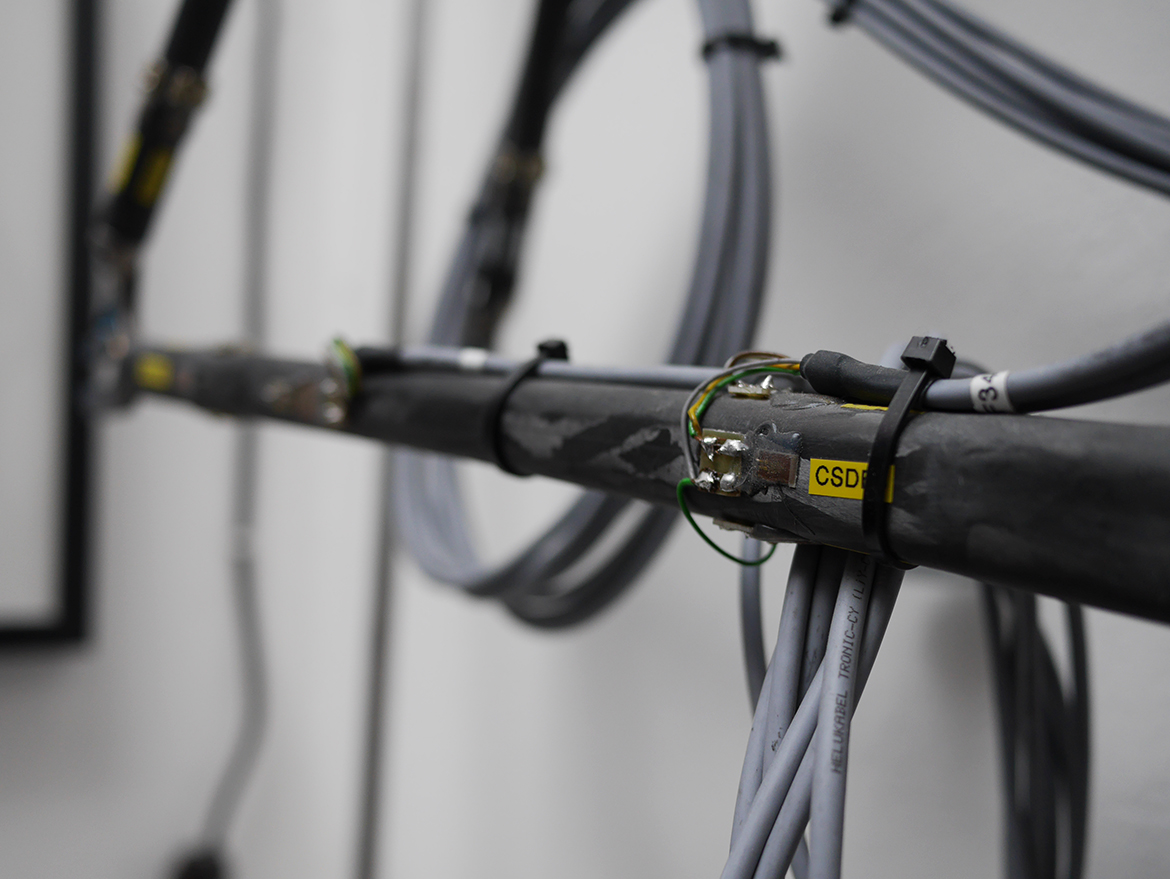 Putting faith in this young brand’s commitment to performance though isn’t just a case of the maker’s merits - it’s the extreme levels they take their research and development to. Hung neatly on the wall is a frameset entirely covered by a tangle of wires, nodes and sensors - a test model that underwent rigorous analysis for strength. By means of its spaghetti assortment of cables passing externally and internally through the frame, this test subject produced measurements not only of external flex, but of internal stress. After studies were carried out in conjunction with the local university, it became clear that Festka isn’t a brand that bats marketing into your face - its claims are real. As we’re observed pawing at this near science museum exhibit, we’re neatly informed that this project was the start of the European Space Agency’s interest in the brand, as well as BMW, both companies keen to take note of the advances and processes that this small custom brand was making. 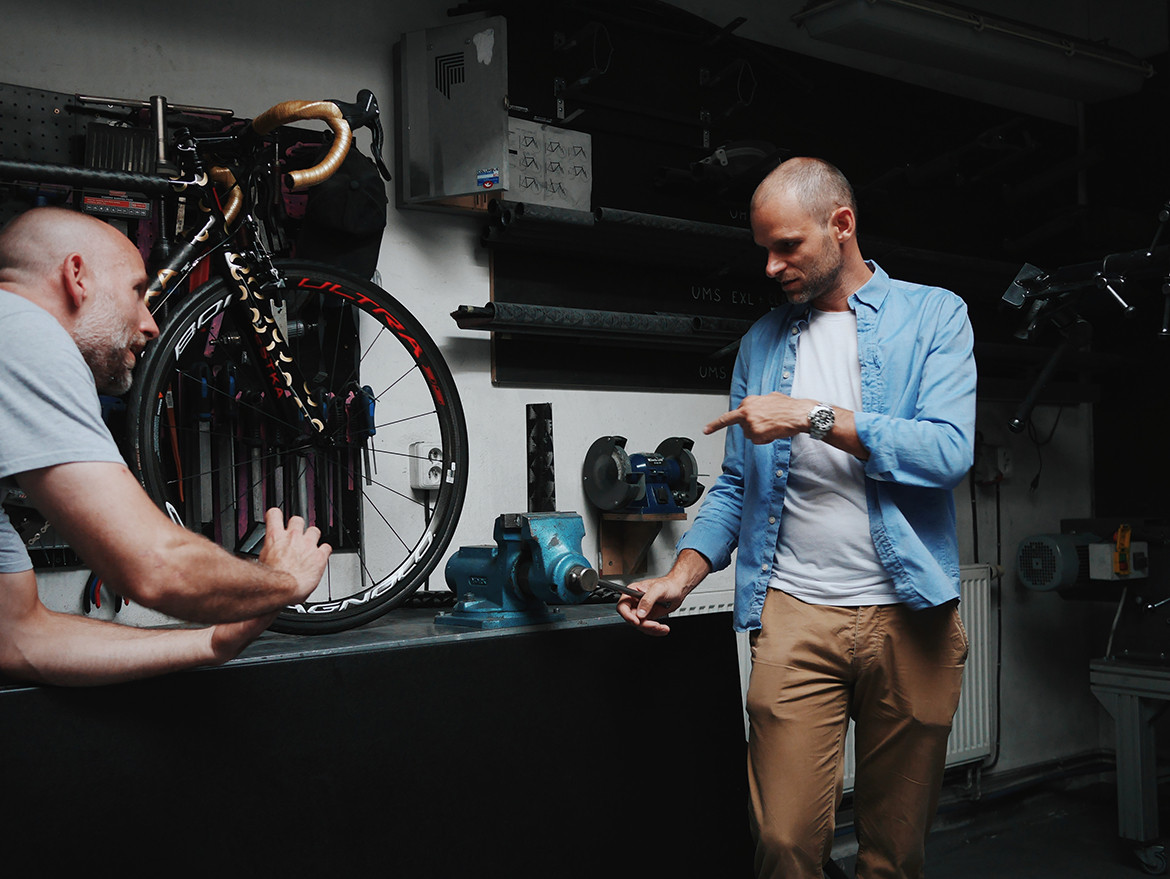 Moving towards the workbenches, talk got more technical. All assembly of the carbon fibre tubing is conducted at these workbenches, in the set-aside jigs. We can see that it’s an intricate process and one that requires a really personal attention to detail. Michael, waving a tube section with all the glee of a ringmaster, puts one end in a vice and begins winding it. As eyes dart madly around the room and lunge for protective eyewear, it becomes clear what he’s demonstrating. Despite crushing the carbon tube, the very same sort as is used in their frames, it’s uniquely wound single carbon fibre weave or filament design builds far more strength into the tube. Recoiling and exerting pressure back on the joint, we’re amazed to inspect the tube and find it visibly un-cracked, and, not entirely structurally destroyed. “The tubes we use”, he explains, “are unique in the cycling industry - we’re the people able to use them”. With our mouths ajar, Michael seems intent on thrashing the tube for all its worth and strikes it against the edge of the vice with a real clout. Passing the tube to us, once again, just a little cosmetic scratch is all that this tube shows for its punishment. Festka’s carbon fibre truly is unlike any other. 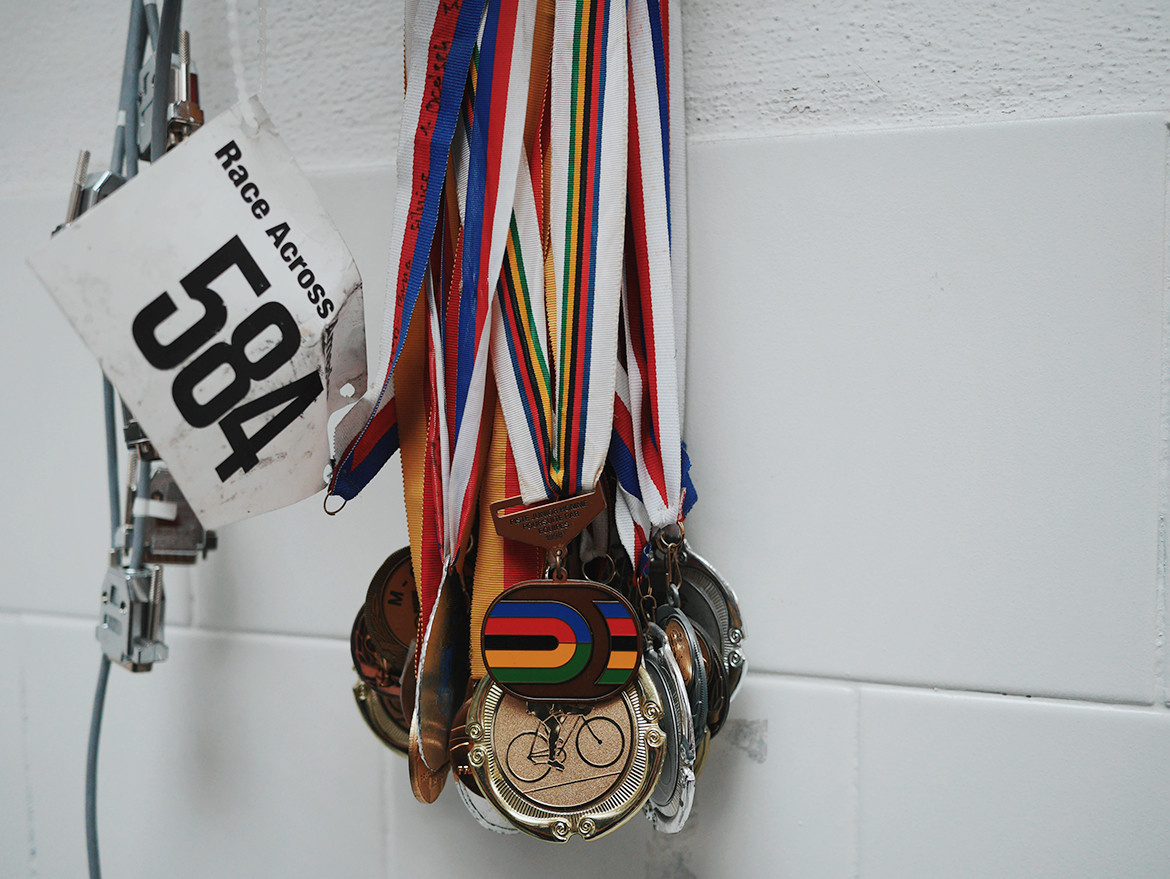 Walking around their workshop and getting our grubby hands on most everything there is to play and fiddle with, we eventually turn our attentions to the steadily growing crowd of people thronging the not so huge studio workshop. It soon becomes apparent that there’s a real mix milling about - from the Festka team, to industry insiders and then the actual owners from all over the world, everyone was there to share their experience of what it is to ride, and moreover, what it is to ride a Festka. Riders from just across town, to people taking time out of their schedule to be there at the factory, all there for the love of the ride. 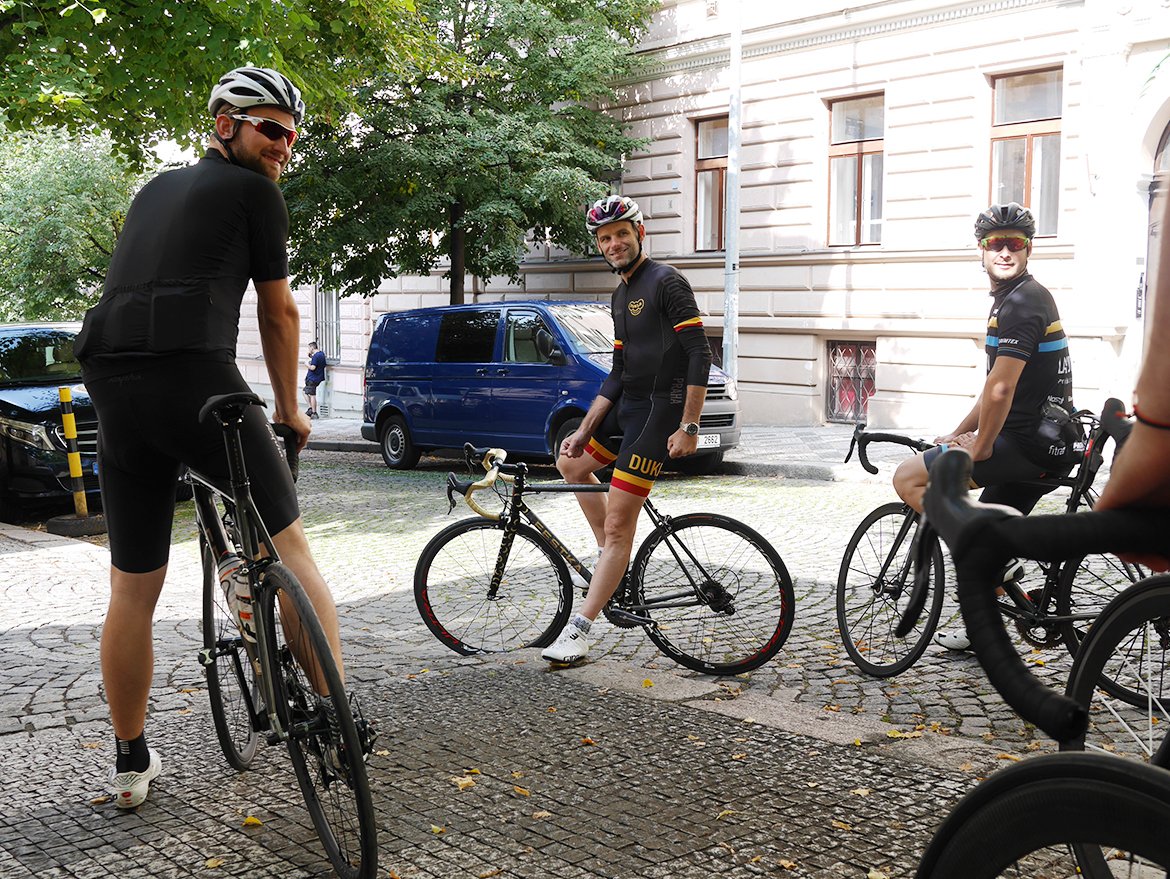 Waking early the next day, we were eager to try the machines we’d been shown. With the same crowd from the night before now transformed into their lycra-ed alter-egos, we set off on an 85km loop of Prague and the local hills. Hitting a steady pace, climbing, and descending the local roads, it’s no wonder that these bikes are quite so honed - the staff really put each creation to the test, and use their own experiences to develop each frame to the best possible outcome. 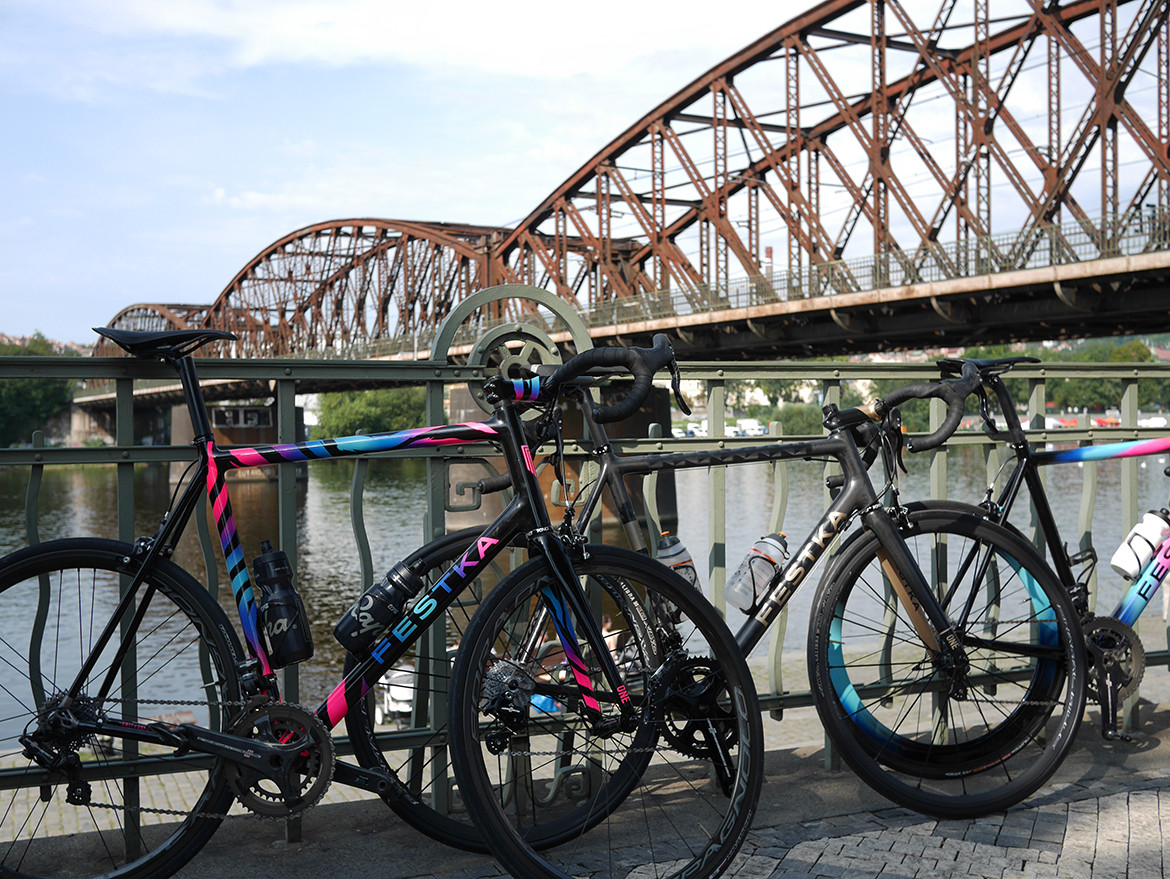 Sat astride the Doppler, I was given a supremely comfortable and smooth ride despite some of the hobbled descents. Direct when it comes to handling, but smooth in ride quality, the Doppler rolled on, never struggling to surge forwards when committing power through the pedals. The frame's beautiful metallic sheen the consequence of a complete anodisation of the frame’s tubes. This frame had then undergone some precision blasting, etching the decals onto the frame with such delicacy and care that this went beyond a paint job, and into the realms of true craftsmanship. Rolling as part of a full group, there was considerable attention thrown the way of many of the bikes, outlandishly and decadently finished and searingly stand-out, however low-key.

Stopping for a beer at one of the numerous inns on our descent, further time was given over to simply chatting, talking with owners, riders, and cycling lovers. One encounter led to a conversation with a German, taking a 300km road trip simply to ride out with this run of the mill Saturday group ride. What we were witnessing wasn’t just a client-customer relationship - these people had sat down and worked together to produce the bike beneath them, and that, evidently, was a special bond. Finishing the ride off with a one kilometre climb at 20% on cobbles, we were soon deposited back at Festka HQ, greeted by homemade cake and a post-ride coffee to settle the cobble-induced quaking in the legs. 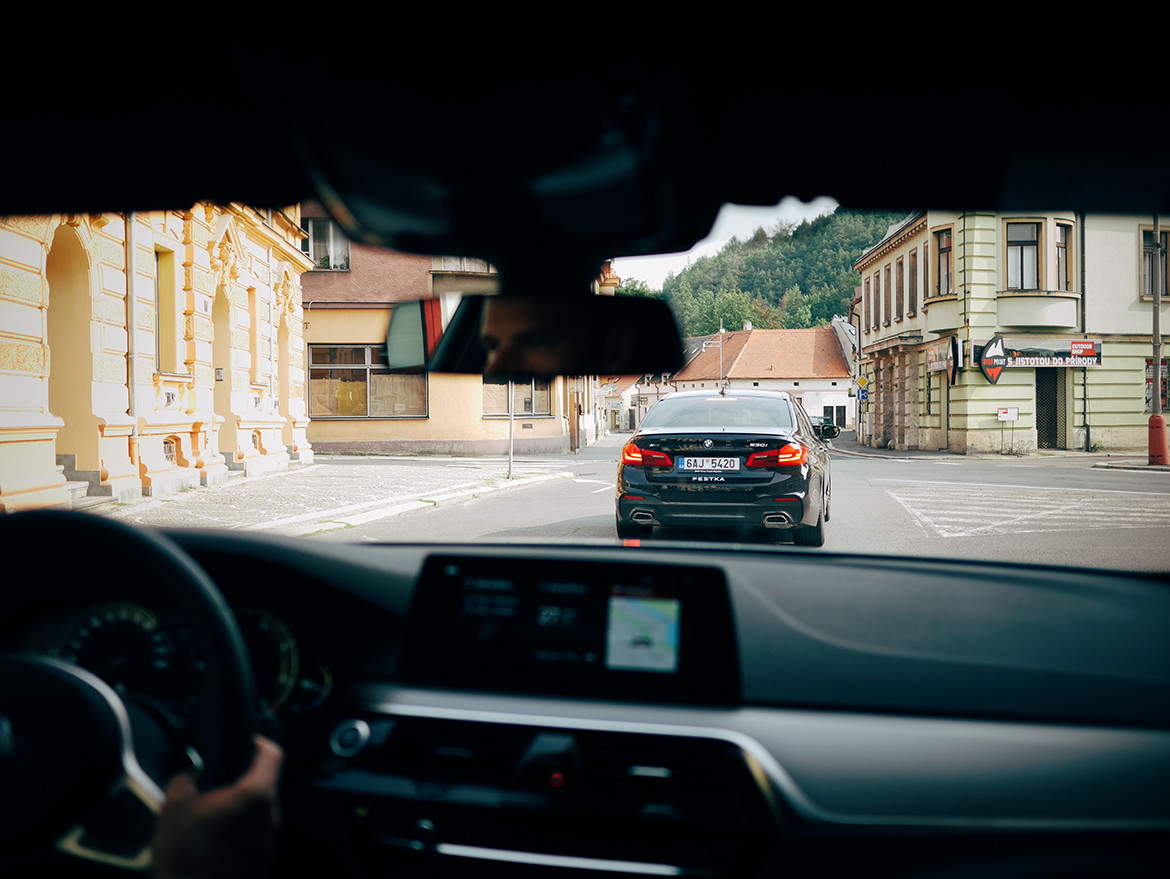 The final point on the itinerary saw us hop into the car for a 200km drive to Sušice - the site of the carbon fibre factory where all Festka’s tubes are actually made. The drive offering us ample time to ask Michael just why he started Festka, and the response was rather compelling. Having not touched a bike since retiring from pro-cycling, his friends grouped together to get him a bike, and when presented with a “pick anything you want” scenario, he found he simply couldn’t. Custom he thought, was the answer, but, in shopping around, he couldn’t find anyone who was really treating carbon fibre for the material it was. “Whilst building with steel, people perfected their techniques and built with love. When aluminium came along, people used what they’d learned in steel on aluminium frames, and when carbon came along, they used their aluminium techniques, without ever stopping to appreciate that changing the material requires you to start entirely from scratch if you’re going to build the best possible frame…” 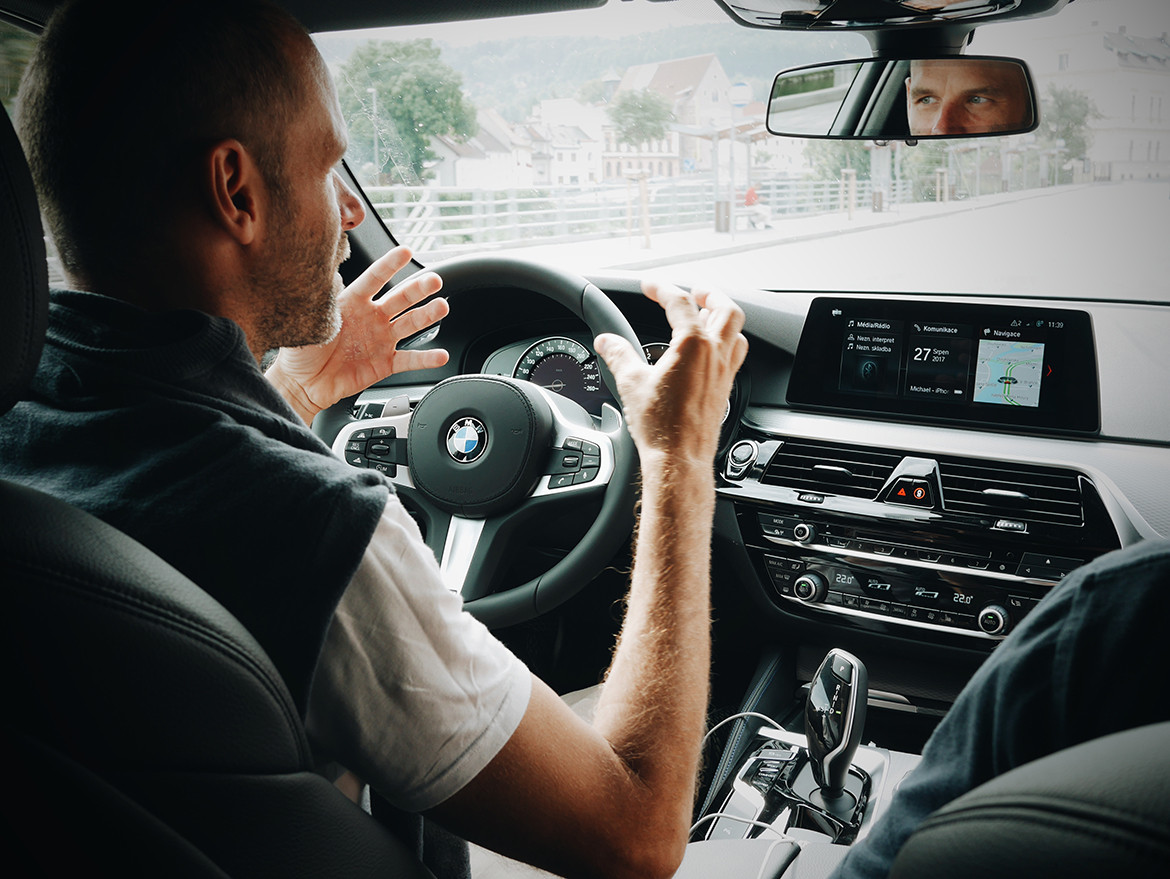 Frustrated by his findings, he approached a university professor in composite technologies and asked just one thing - who were your best ever students? The answer - well, that was why we were in the car. The Compotech factory established by two student friends wanting to make ever stiffer, ever lighter tubes for kayak paddles. In solving their problem, they’d stumbled upon a means to make incredibly strong tubing with incredible precision - not more than 10 microns of differential in any given cross section. With co-founder Ondrej opening the doors on a Sunday just to talk us through the process, this was obviously an endeavour of pure pride and passion. Catamarans, masts, and huge beams for industrial use, it didn't take a doctorate to tell that this factory was ahead of the game. Explaining the setup, Ondrej joked, looking through the setting up stage, and showing off the machine he himself developed and made in order to manufacture the carbon fibre that had become lauded and the envy of both the automotive and space exploration industry. 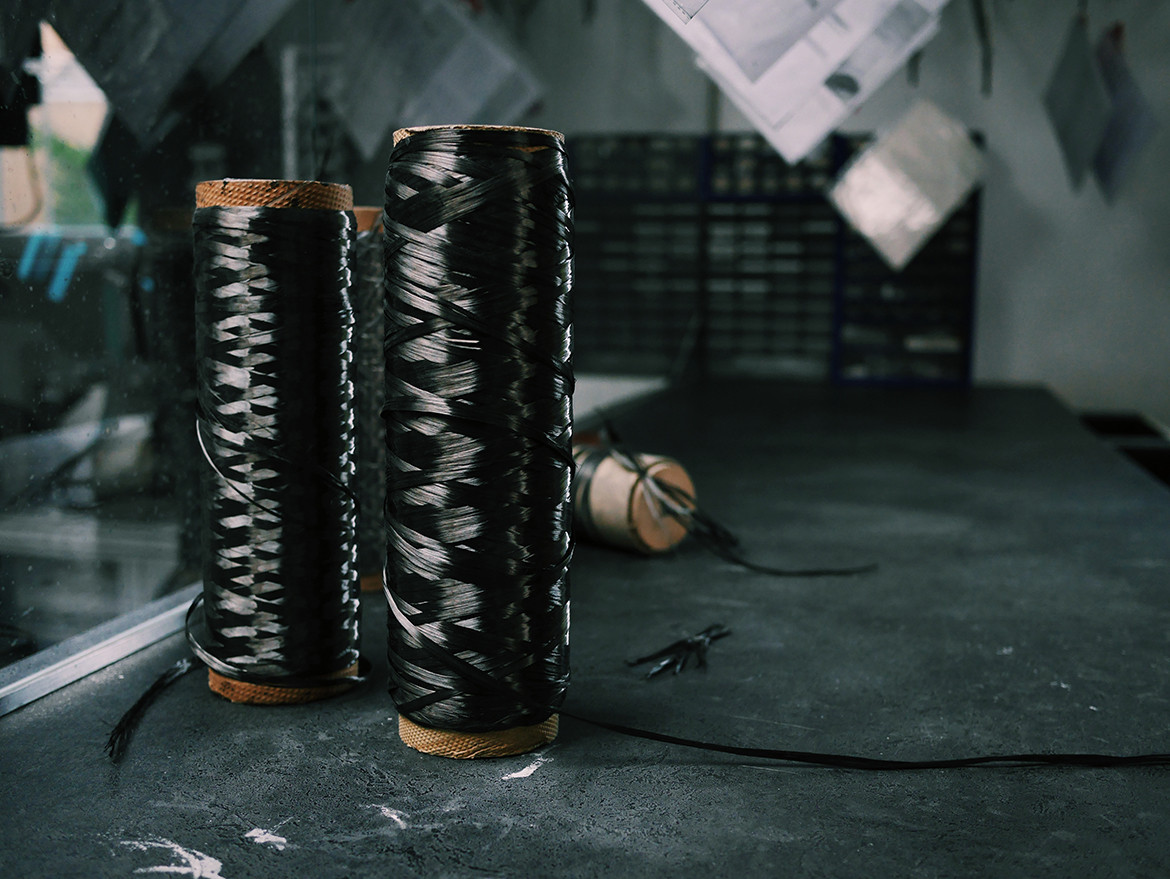 CompoTech devotes 20 people to full-time development and research in this relatively small factory tucked away in a sleepy corner of the Czech Republic. This is a company that isn’t just content to churn out products in huge quantities. Every single detail is precisely laid out and monitored in order to assure the best possible performance of each component in its intended field, CompoTech manufacturing is exceptional, and Ondrej’s enthusiasm proved contagious, leaping around, showing us ongoing experiments with glee. But why did Ondrej agree to collaborate with Michael? Well, it comes in two parts. Upon discovering the two graduates from the university professor he approached, it became clear that through complete coincidence this factory was in none other than Michael’s hometown. Approaching Ondrej with his proposition, Michael received a single response - why us? In his reply, Michael took time to note that both Ondrej and his co-founder Vítek were sports enthusiasts, and how would they like to ride around on bikes they knew they had made the tubes for, how fun would that be? It sealed the deal. With an exclusive partnership signed, CompoTech and Festka were bound together.

Heading back to Michael’s family home for a light lunch, one thing became immediately apparent - Festka, for all the marketing and hype, is a brand that revolves around the stories of those at its core, and their collective pursuit of excellence. Their story shows that the best isn’t just the reserve of the biggest company in the field - it’s possible to reach for it yourself, provided you’re brave enough to step out and do things differently.

With Festka’s dedicated team committed not only to building better bikes, but to the cycling lifestyle as a whole, it was quite clear that they’d brought heart and romance into the twenty-first century, making carbon frames with real soul, and the same dedication that had seemingly disappeared into the ether along with the famed artisan frame builders of days gone by. From design to ride, our time with Festka ingrained something quite powerful about their way of working, a quality that doesn’t often strike you, and stands out for its rarity in a saturated industry. That quality? It’s a very human excellence. 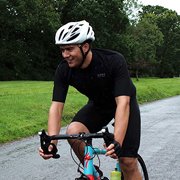