‘The complete package’ - A phrase many brands and marketing gurus band around, often flippantly, and often with a resulting feel of disappointment. Bike manufacturers are always striving to achieve this goal, of producing a complete rider experience, whether that’s a machine which boasts the climbing ability of a mountain goat, with the aerodynamics of a fighter jet or simply a lightweight and stiff product.

When it comes to aerodynamic road framesets, up to now, there has always been a compromise attached with going fast, and that was weight and stopping power. Manufacturers were able to make slippery smooth framesets but weight was a massive penalty, as was the technology behind stopping it.

Scott claim to have addressed these issues to create what could be the complete package, and we headed to their 2018 bike launch in Germany to find out if this was the case.

Arriving in the hills above Friedrichshafen, we were welcomed into the hotel by the Scott Bikes team, for a day being introduced to their latest range of disc equipped bikes. 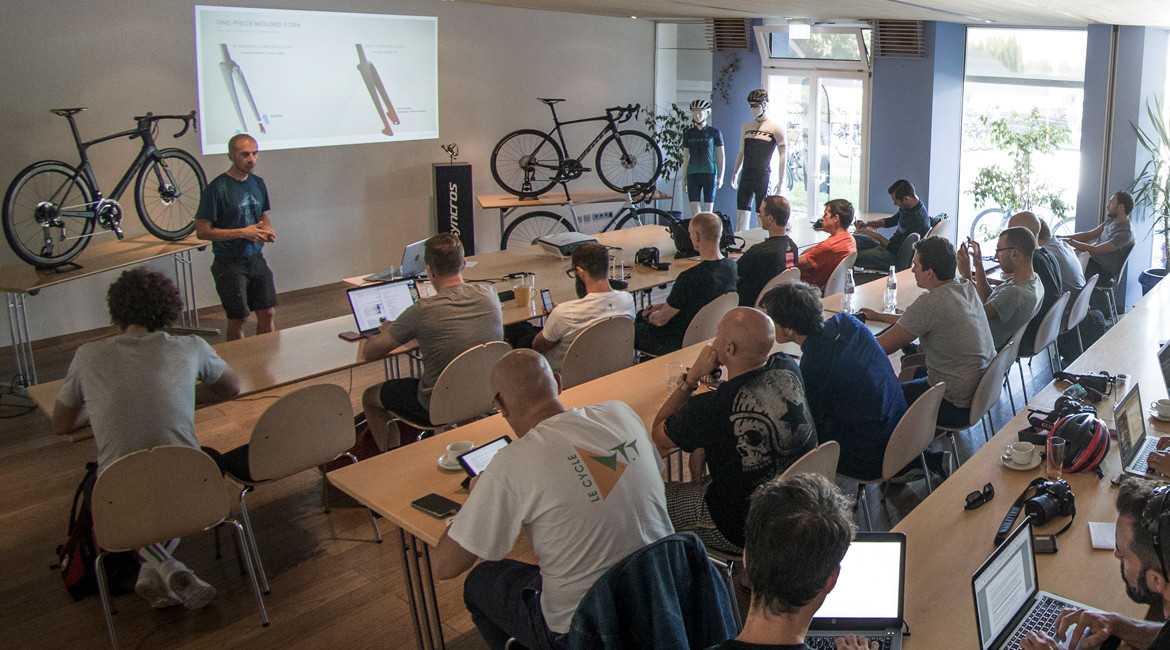 Back to the classroom

Beginning the day, we were ushered into a conference room where we were presented with key facts about their latest incarnation, the eagerly anticipated Foil Disc. 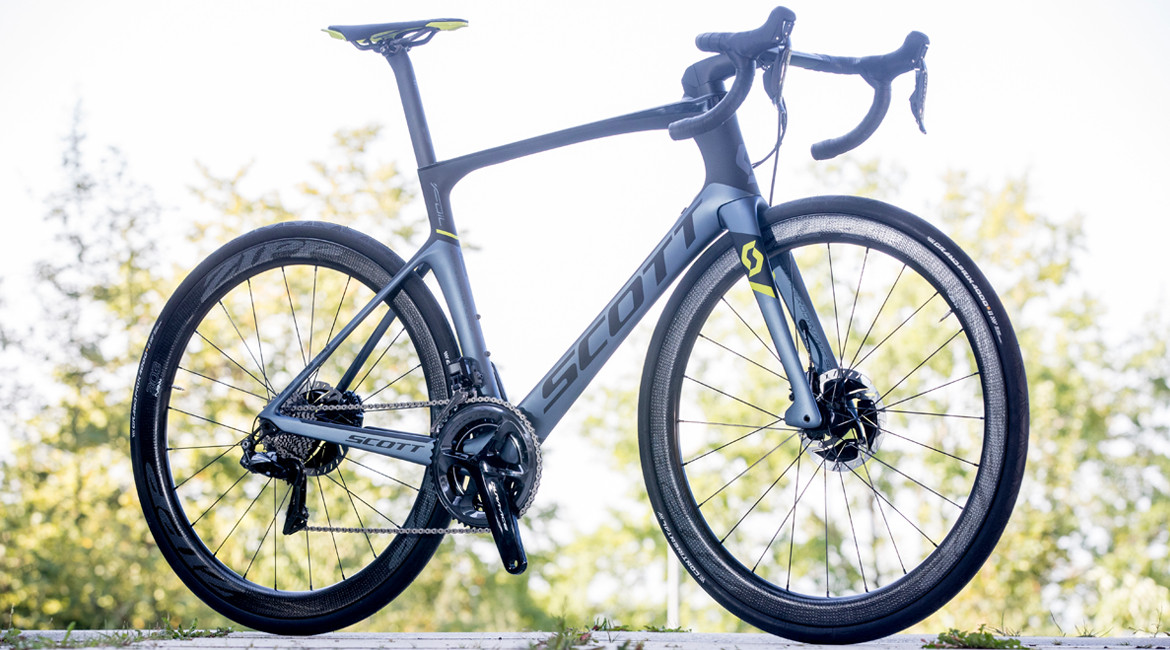 Bernoit Grelier, head engineer at Scott Bikes, introduced the bike and presented us with key information as to the advancements his team have made with this bike. Bernoit presented key statistics including how the bike compared to its rim brake equivalent and how the engineers have actually managed to make the disc version faster than its predecessor. 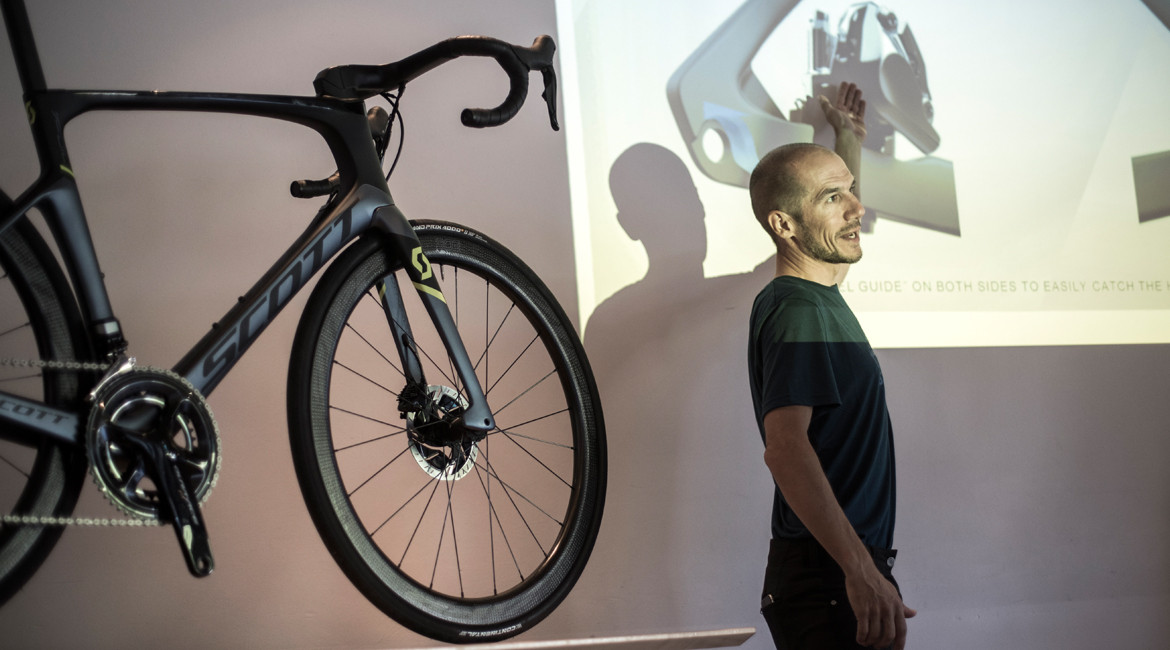 Disc brakes and aerodynamics are not usually two areas that work in harmony together. The Scott Bikes team were keen to buck this trend and create a fork that would be as aerodynamic as the non-disc version.

The result: An asymmetrical fork, completely refined for a disc brake setup, with longer and narrower blades and trailing wings to house the dropouts. 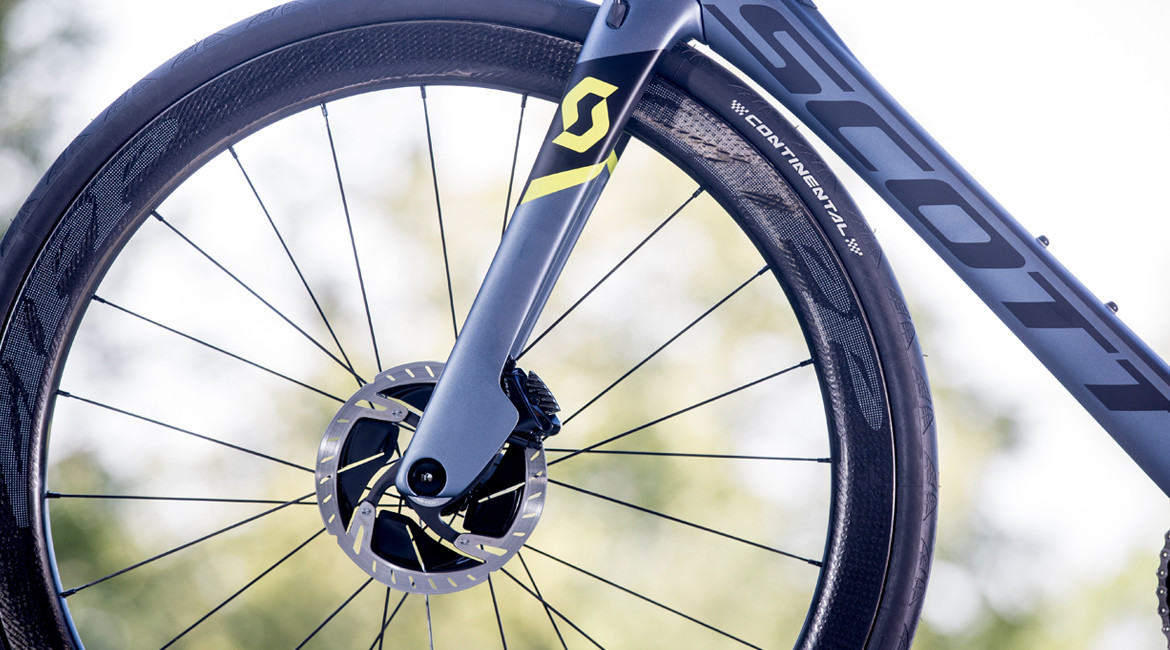 Attention to detail is key and Scott have even gone as far as to hide the brake caliper behind the fork, to create the cleanest form for the wind to pass over. If that wasn’t enough, doing away with the front quick release axle in favour of a bolt equipped thru-axle design claims to save an extra watt in tests.

Getting the upper hand on the rim brake version, Scott have been able to remove the brake caliper from the fork, and as such have managed to make a smoother, more aerodynamic fork.

Completely redesigned to accommodate disc brakes, the designers and engineers have created a one-piece moulded design - a first for Scott. 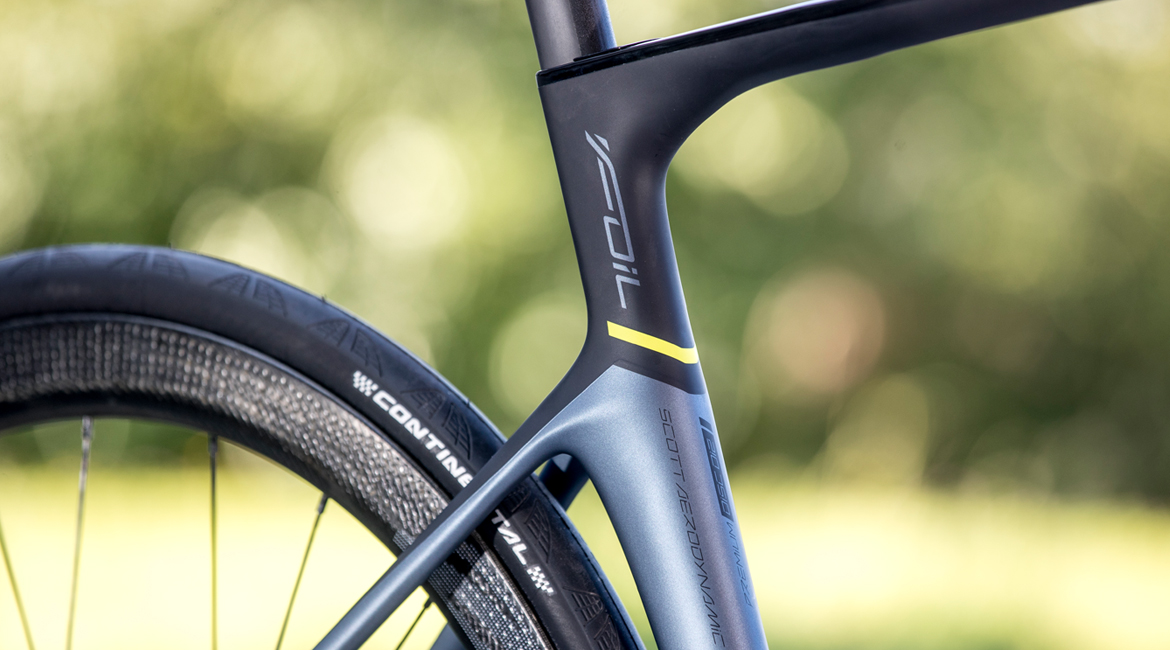 This advancement has meant Scott have been able to use minimal material, bonding the disc brake flat mount and dropout into a one-piece design. Less material means weight is kept down as well. Weighing just 985 grams in a 56cm size, the disc ready Foil weighs just 40 grams more than the rim brake version and, most importantly, remains just as stiff.

Love them or hate them, disc brake equipped road bikes are becoming more and more prevalent in the market and as such usability has to mirror this increased adoption. Something as simple as increasing the threaded pitch on the thru-axle helps immensely to speed up and make wheel changes easier, a 0.5 millimetre increase from the standard 1 millimetre industry offering but a huge 50% improvement in the speed it takes to unwind the axles.

Not stopping at thru-axles, Scott have introduced Shimano’s new direct-mount derailleur standard which offers greater clearance for removing and installing the rear wheel. The shape of the dropout also aids slotting the wheel between the caliper gap; there’ll be no more fiddling around getting the wheel in place with the Foil Disc. 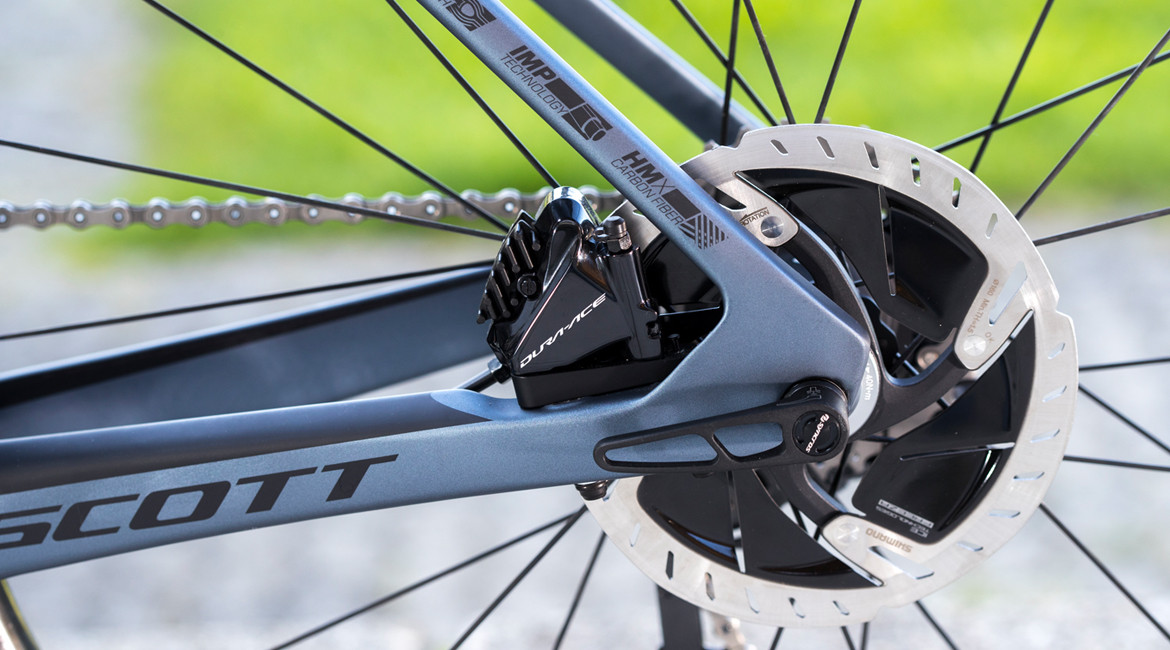 Clearly a race ready frame, comfort hasn’t been overlooked in the pursuit of performance. The Foil Disc is a versatile beast, catering for tyres up to 30mm in width, an improvement over the rim brakes 28mm maximum tyre compatibility. 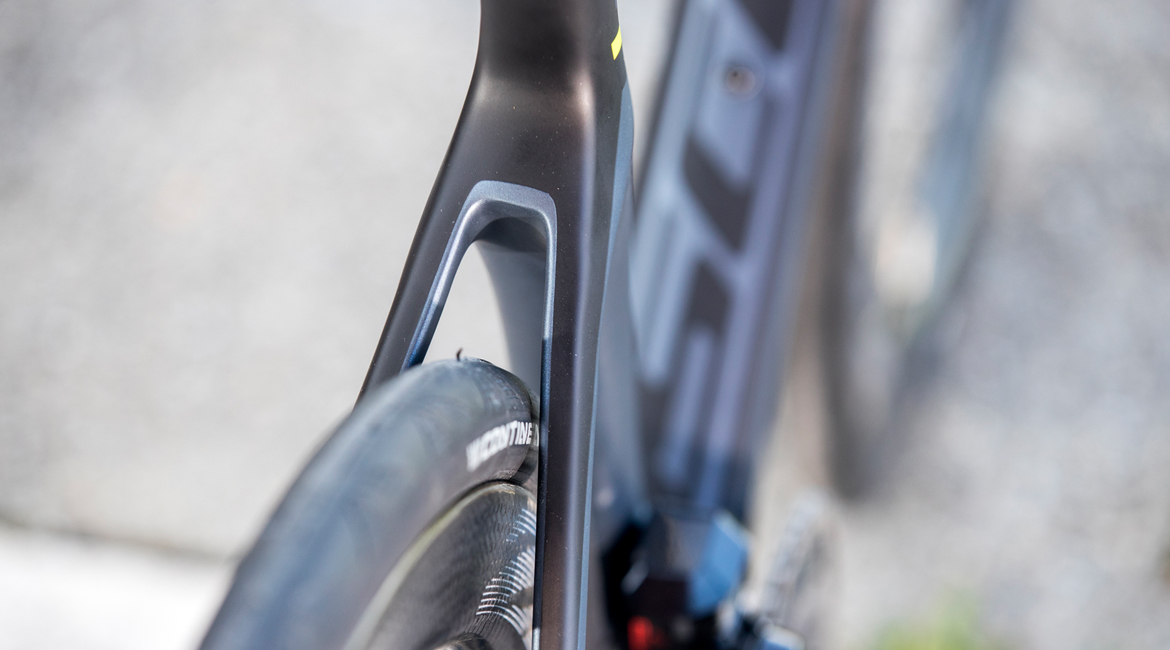 Classroom stats, slideshows and graphs covered, it was time to see how the Scott Foil Disc performed on the road. It was time to take it for a test ride. 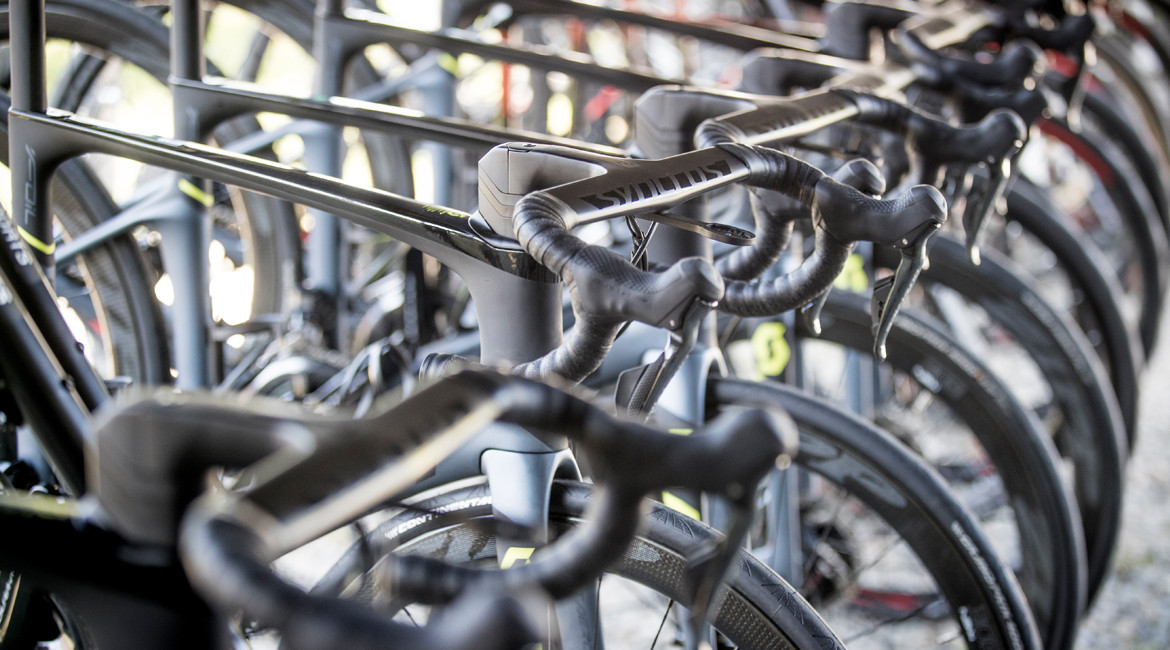 As conditions go it couldn’t have been better. With the temperature in the early 30s and with light winds we headed outside to be greeted by a fleet of brand spanking new pre-production Scott Foil Disc Premium Road Bikes, the company’s flagship model. 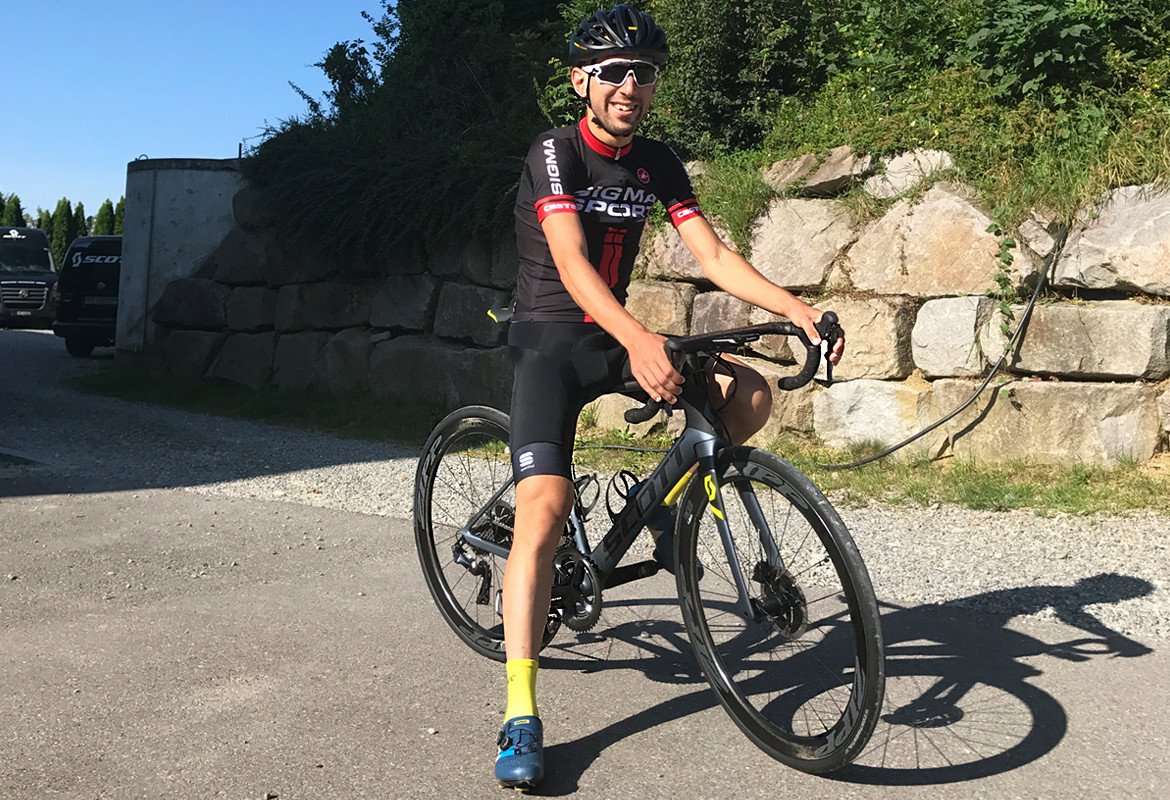 In kit, on bike and it was time to roll out. We were joined for the ride by Orica-Scott pro Luka Mezjec, Slovenian National Road Race Champion and a Giro d’Italia stage winner. Setting off and clipping in, we were immediately aware of this bike’s race bred pedigree. It felt agile and lively but without the unpredictability associated with some race-ready road bikes. 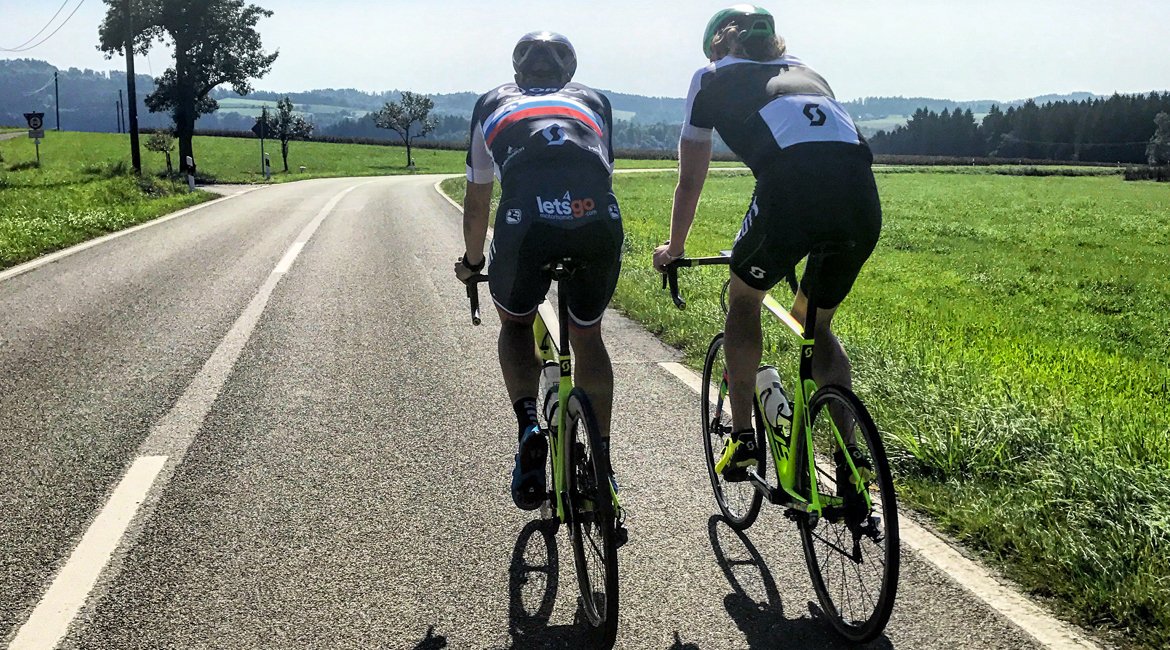 Starting atop a climb might not be the best idea on a bike you have never ridden, with the brakes set up the opposite (continental) way around and, we’ve got to say, it made for a slightly interesting first descent! 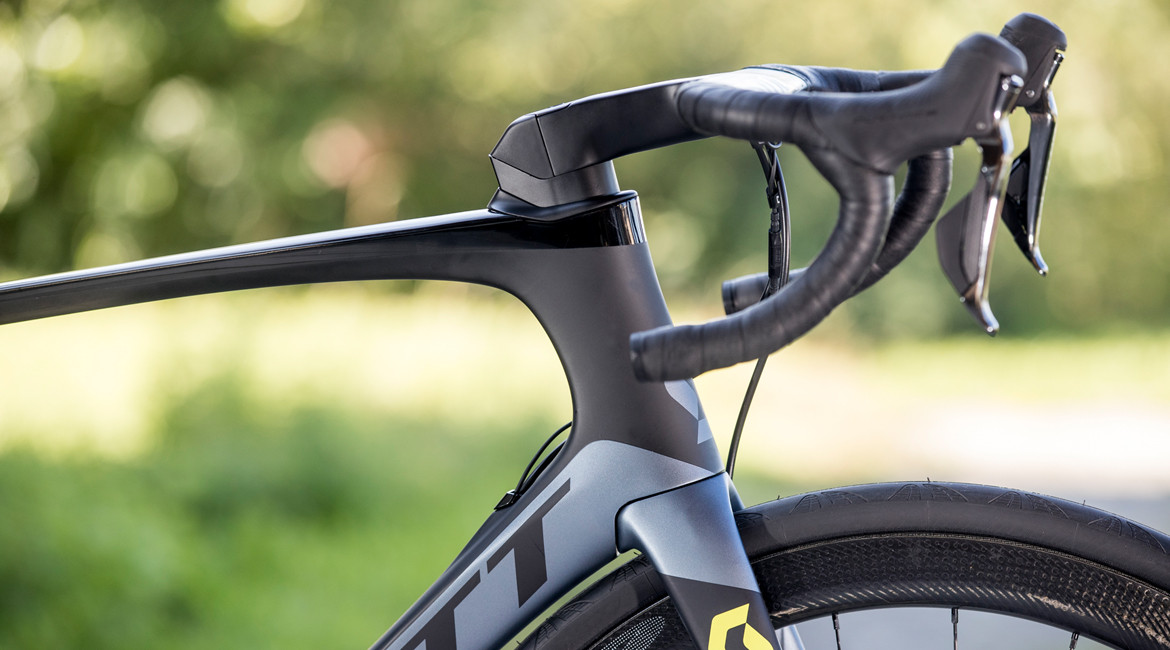 After a few kilometres though, and now with me accustomed to brakes set up the continental way, we were rolling along enjoying the bike’s comfortable ride and direct handling. Equipped with Zipp 303 NSW Wheels and Continental GP4000s Tyres, the rolling speed was impressive, as was the handling in corners. 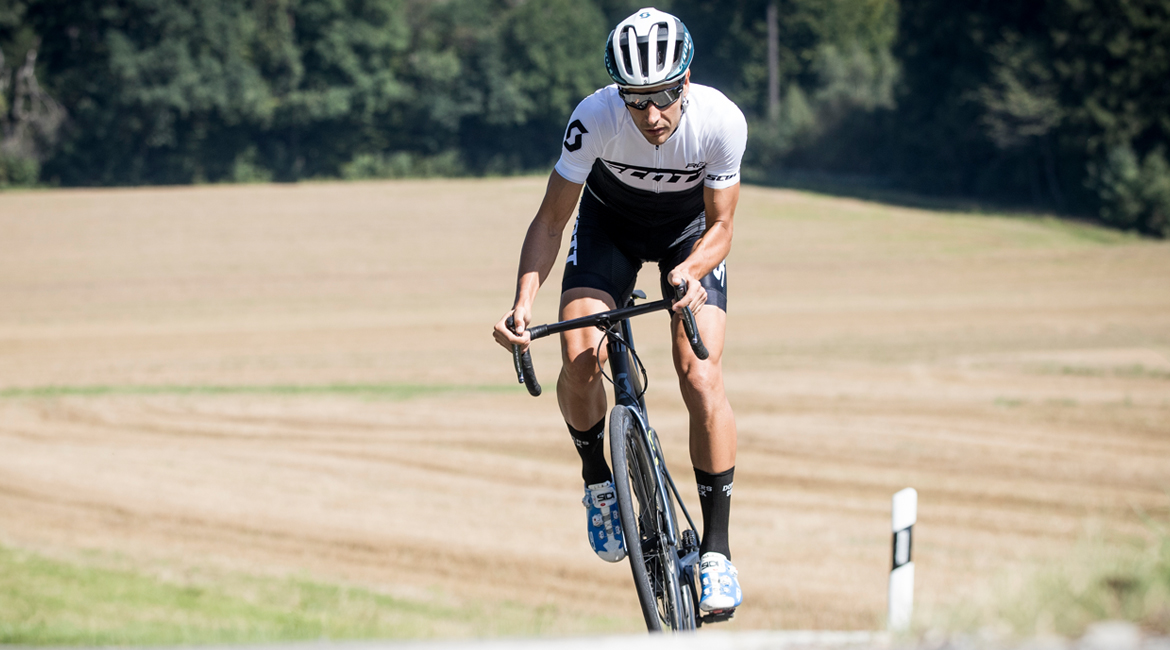 On the flat is where this bike really excels, picking up speed with ease and, with the Dura-Ace Hydraulic Disc Brakes, scrubbed off speed well, without any edge of the saddle moments. 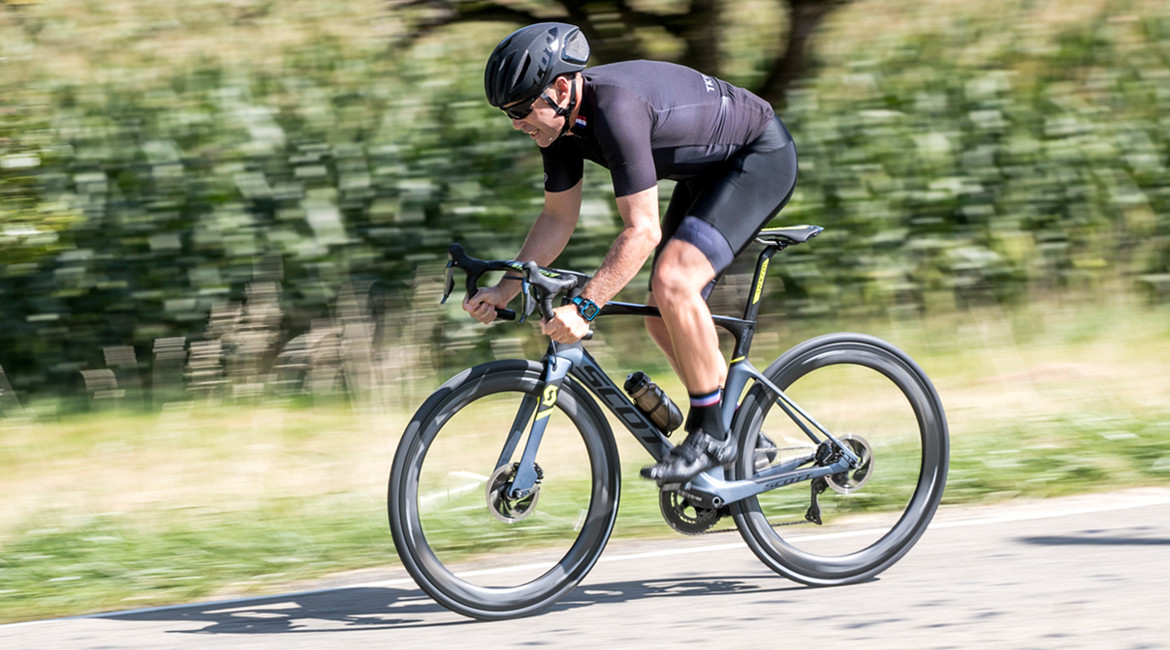 Onto the climb back to the hotel, a two kilometre, relatively steep affair, the Foil felt spritely, and a few times I had to remind myself I was riding an aero road bike and not their mountain ready Addict machine. 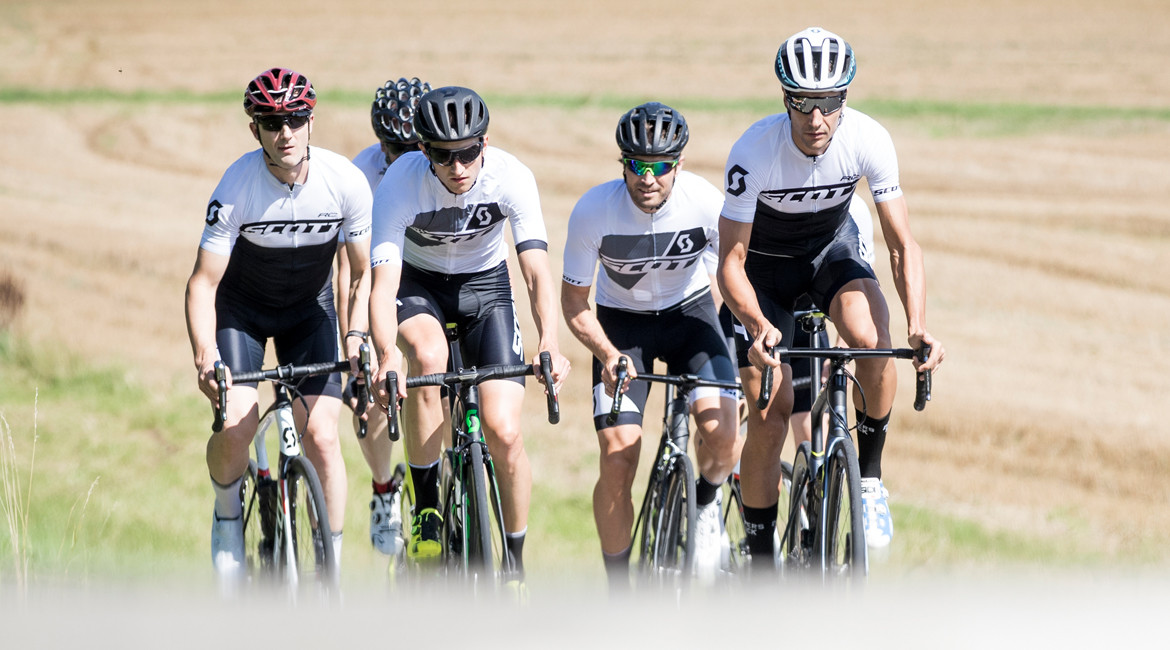 Rolling back into the hotel grounds with 30km on the clock we were asked if we’d like to do another loop. We didn’t need asking twice. Heading out again for another 18 kilometres we were getting more confident on the Foil Disc with every turn of the pedals. Reluctantly riding back to the hotel and returning the bike to the mechanics, we were blown away with this bike. Complete package? We think Scott has got pretty darn close with the Foil Disc.