The 104th edition of the Tour de France is near, with the peloton rolling out from the German city of Düsseldorf on the 1st July 2017. Throughout the three weeks, the best sprinters will be challenging for the green points jersey. We've taken a closer look at the history of the maillot vert, notable sprint stages and the 2017 contenders that will be battling it out to wear the jersey into Paris on 23rd July.

The green jersey, or maillot vert, was introduced into the Tour de France in 1953, which coincided with the 50th anniversary of the race. In 1952, Fausto Coppi won the overall at the Tour de France by such a great margin that riders were simply quitting by the roadside, and the decision was made to introduce a separate competition, the points classification, which gave riders the chance to compete for the much coveted green jersey. 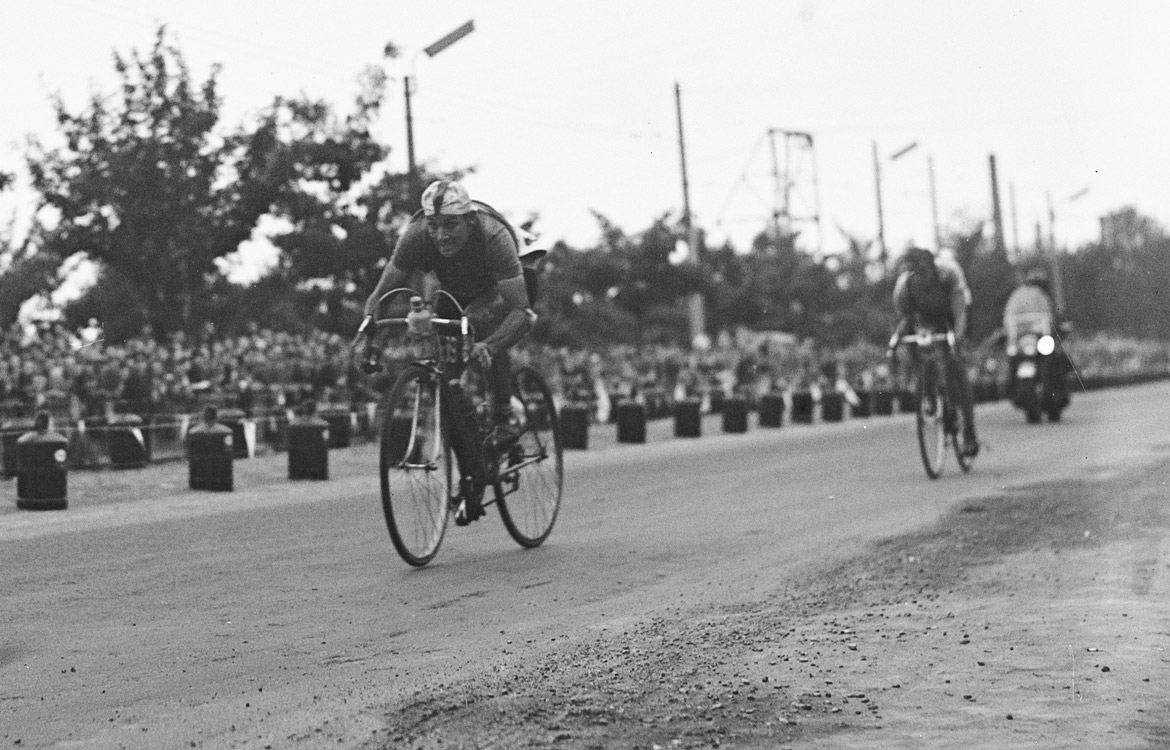 The jersey was made by the official kit manufacturer, Le Coq Sportif, and was first worn by Fritz Schär of Switzerland. The slightly more subtle colour compared to the yellow and polka-dot jerseys was chosen due to the then sponsor, La Belle Jardinière, who produced lawn mowers. Due to a new sponsor in 1968, there was a brief change to red, but green was once again the colour of choice the following year, and has continued to be ever since.

Already an official race partner for a decade, Czech car manufacturer Skoda became the sponsor for the Tour de France green jersey in 2015. 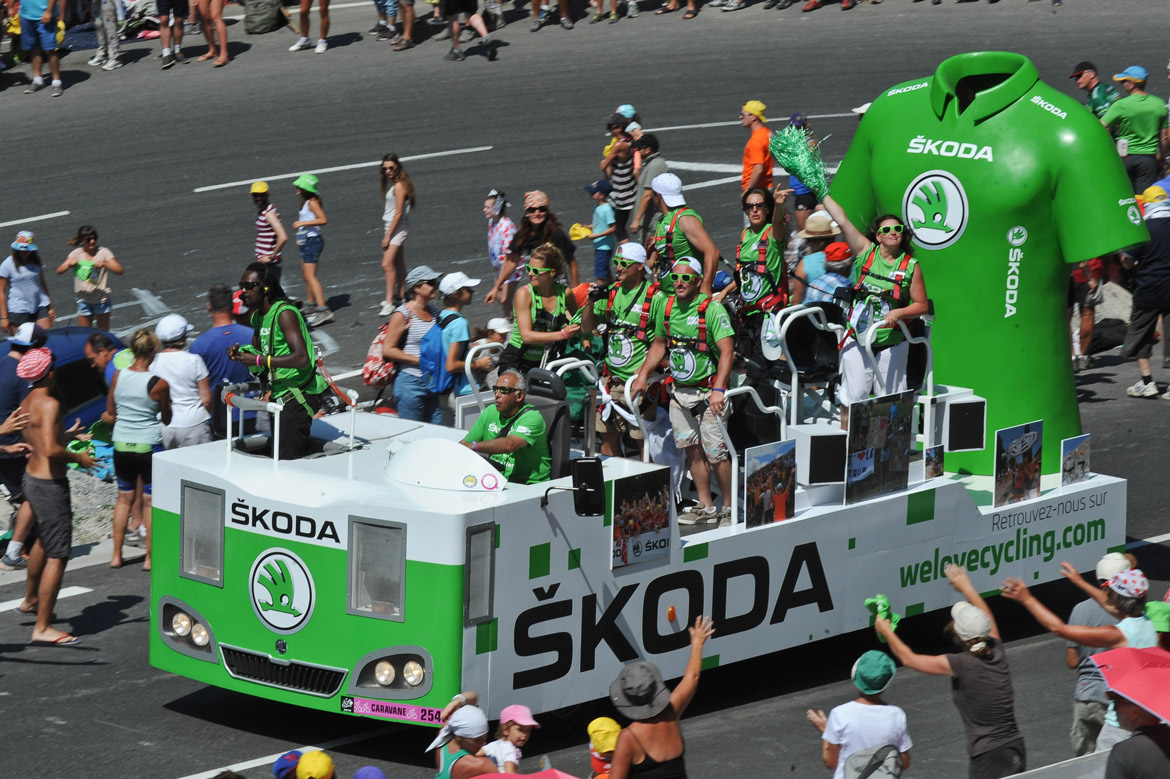 The new classification brought a new dimension to the race and encouraged sprinters to take part; points were awarded depending on a rider's finishing position, down to 15th, initially just for finishing positions in each stage, but later also for intermediate, pre-determined sprints within the stages. In fact, penalty points were originally given out for finishing further back, and the rider with the fewest points so far in the race was awarded the jersey. This all changed in 1959 and the current system, rewarding points to the top 15 riders, was introduced.

The points awarded depends on the type of stage; flat stages offer more points than TT’s and mountain stages. Ultimately, this is a sprinter's competition and this system increases a sprinter's chances, although other riders are still in contention if they have a large number of high placed finishes.

At the end of the Tour, the rider with the most points wins the points classification. A tie results in the winner being determined by the number of stage wins, then intermediate sprint wins and then, if still tied, their standing in the general classification. 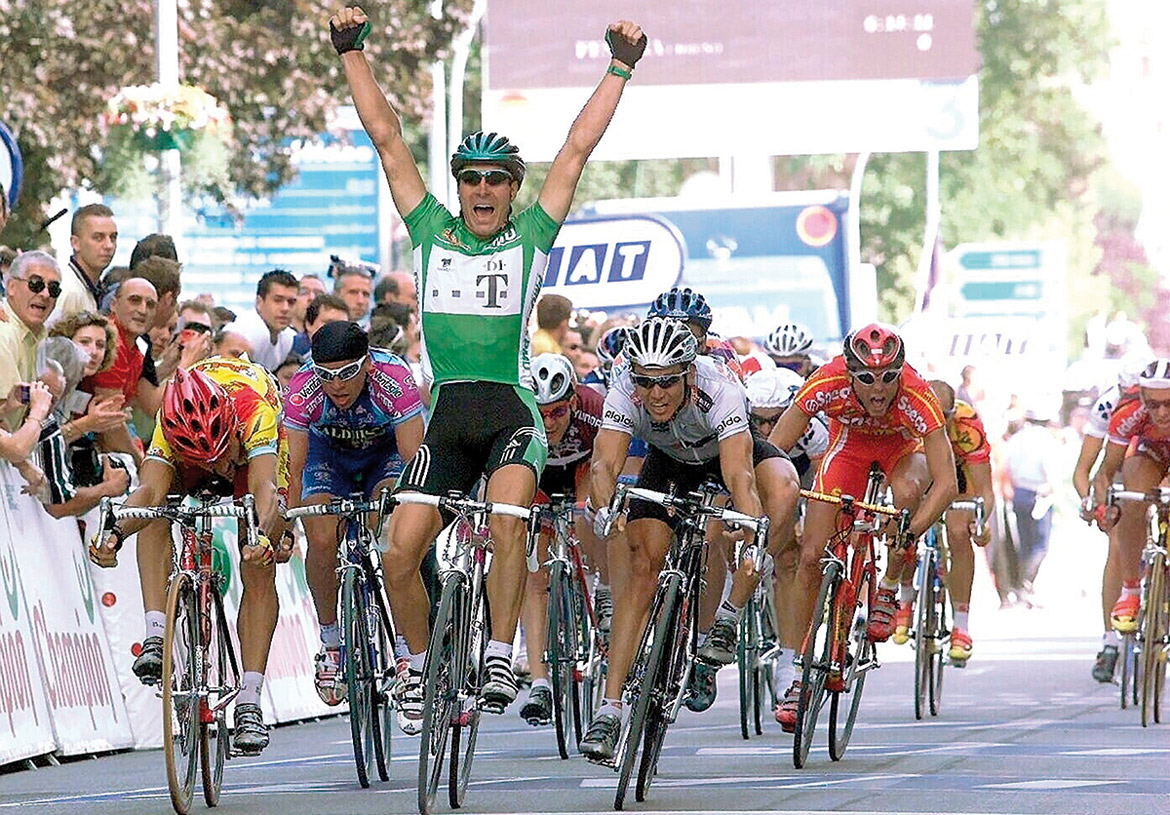 Contenders for the green jersey in 2017

Sagan is once again eyeing up the green jersey after dominating the points classification and being awarded the jersey for the past five years. If he follows up with a win in 2017 he will match Erik Zabel’s points classification wins at six. He is one of the most versatile contenders - able to win intermediate sprints as well as take stage wins.

Sagan will be back on the Specialized Venge ViAS that he has seen plenty of success with previously. The Bora-Hansgrohe team will use Roval wheels and will be kitted out in Specialized helmets and shoes. All their nutrition requirements will be fulfilled with High5 products. 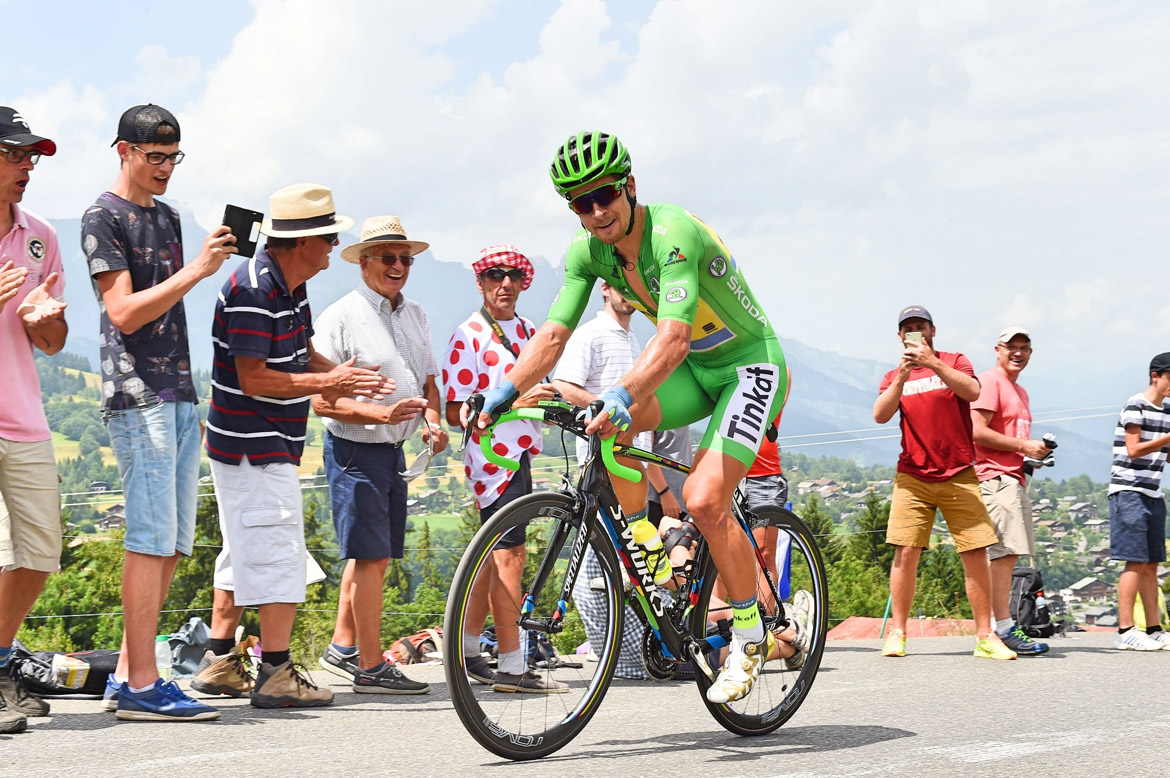 With a points classification win in 2011 and coming in second three times, on top of his thirty stage wins, Mark Cavendish is one the favourites. Unfortunately, he has had a set back this year, being diagnosed with glandular fever, so there is still some uncertainty as to whether he will be fit enough to race.

If Cavendish regains his fitness, he will be riding Cervelo bikes fitted with Rotor UNO groupsets, plus Rotor O-rings and power meters. ENVE wheels with Continental tyres and CeramicSpeed bearings ensure that he will be rolling smooth and fast. Eyewear will be provided by Oakley, leaders in sports optics, to ensure he has the best performance tech available. 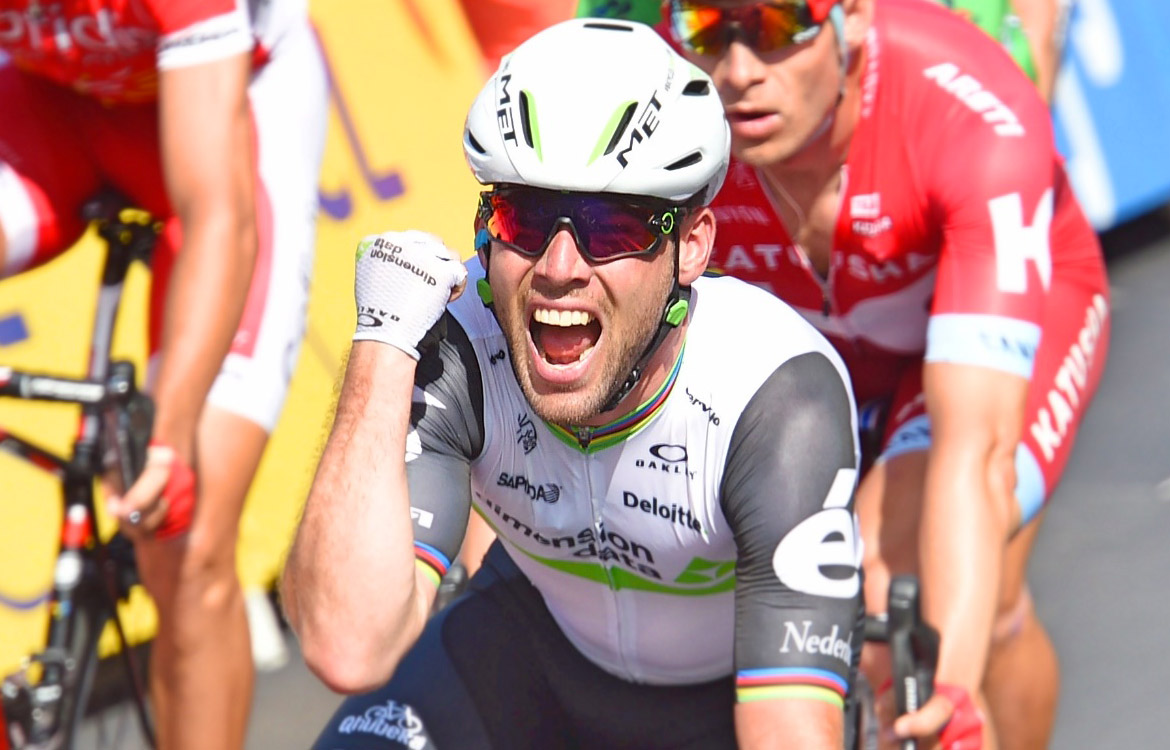 The German sprinter was not on his best form in 2016, and although he came second in the points classification at last year’s Tour with his consistent sprinting, he only won one stage and will be looking to make up for his disappointing 2016 season, this year.

Marcel Kittel will keep himself fuelled and on top form throughout the three weeks with Etixx sports nutrition. CeramicSpeed bearings will ensure he rolls efficiently and Morgan Blue cleaning and maintenance products will keep his bike and components performing at the highest level. 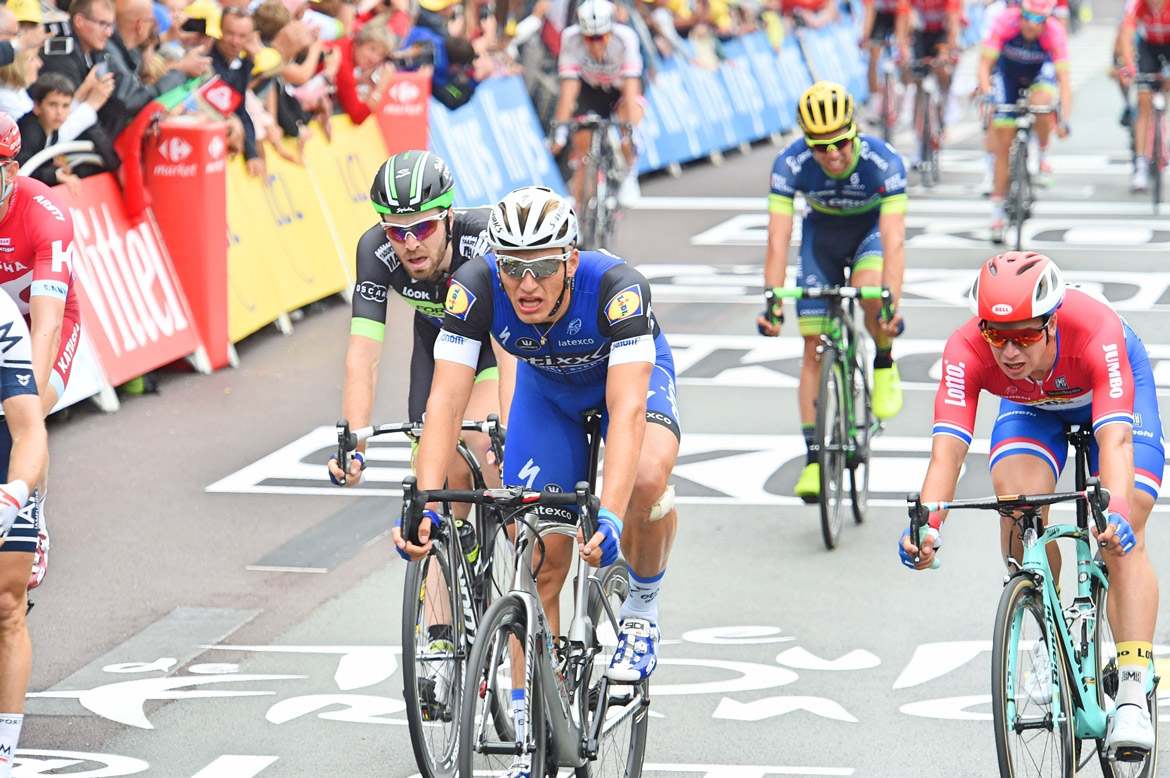 Andre Greipel is a German powerhouse and was an ever-present fixture in the bunch sprints of the 2016 Tour, but only managed one stage win. He could pose a serious threat to the other sprinters if his form has improved from last season, come July.

His bikes will be fitted with Campagnolo components and Deda Elementi finishing kit. Lizard Skins bar tape will ensure he never loses his grip during those sprints. 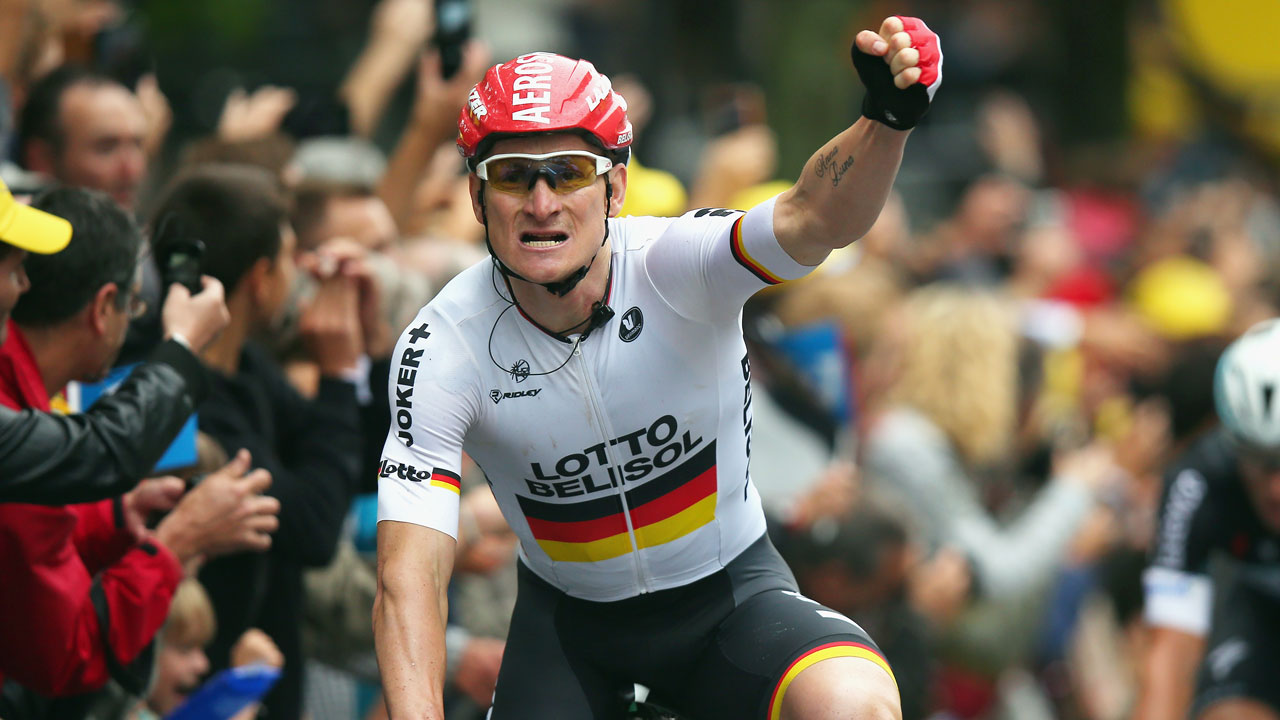 Taking third in the points classification in 2016, this young Australian sprinter is showing his strengths and continues to improve. With a strong backing team this year, in Team Sunweb, he’s in a great position to improve on last year's results.

The team bikes will be equipped with Shimano Dura-Ace Di2 components and pedals, and Shimano wheels. Park Tool will ensure the team mechanics have the best tools for keeping the bikes in top condition. Oakley eyewear, commonplace in the peloton, provide the best in sunglasses technology. 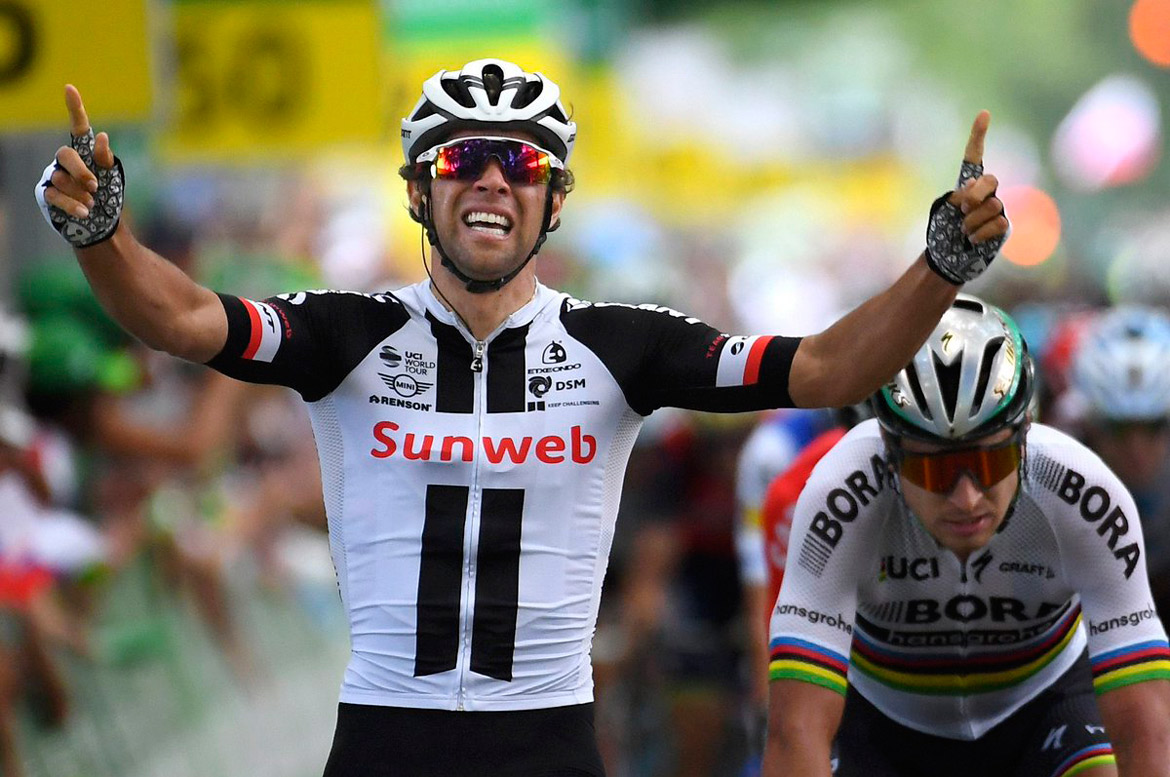 In 2017, seven of the nine flat stages are potentially pure sprinter territory, likely to end in some exciting bunch sprint finishes.

Unlike the hilly Liège-Bastogne-Liège Classic, this stage features rolling roads and no climb to the finish. This is one for the fast finishers and is likely to end in a bunch sprint with victory being awarded on the Boulevard de la Sauvenière.

A second stage likely to favour the sprinters, although potential cross-winds could stir things up a bit.

An out-and-out sprinters stage, any breakaways will likely be chased down and the lead-out trains will come into effect down the avenues of Troyes.

After the previous day, this will probably be a battle between the sprinters to make up for any disappointing results. With crosswinds in the last 40km, there could be teams ready to take advantage, although breakaways are likely to be caught. 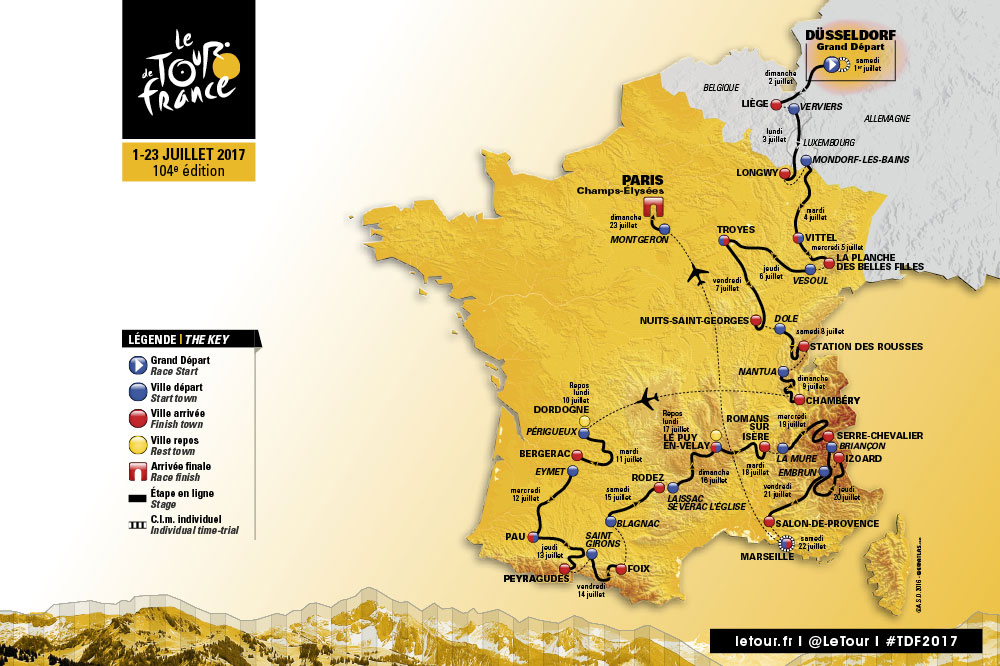 The day after the first rest day, there will undoubtedly be a sprint finish in Bergerac, and teams will be planning how to prepare for this, or avoid it by launching a late attack, which has, on a previous visit, succeeded.

After the second rest day, breakaway riders, as well as sprinters, are likely to favour this stage, thanks to its hilly topography and potentially high winds. Often though, Rhône Valley finishes end in bunch sprints, so teams will have to work to avoid this.

The most coveted sprint win of the Tour, on occasion the winner of the points classification has been decided on the Champs-Elysées, and every sprinter wants victory from the most prestigious stage win of the Tour. 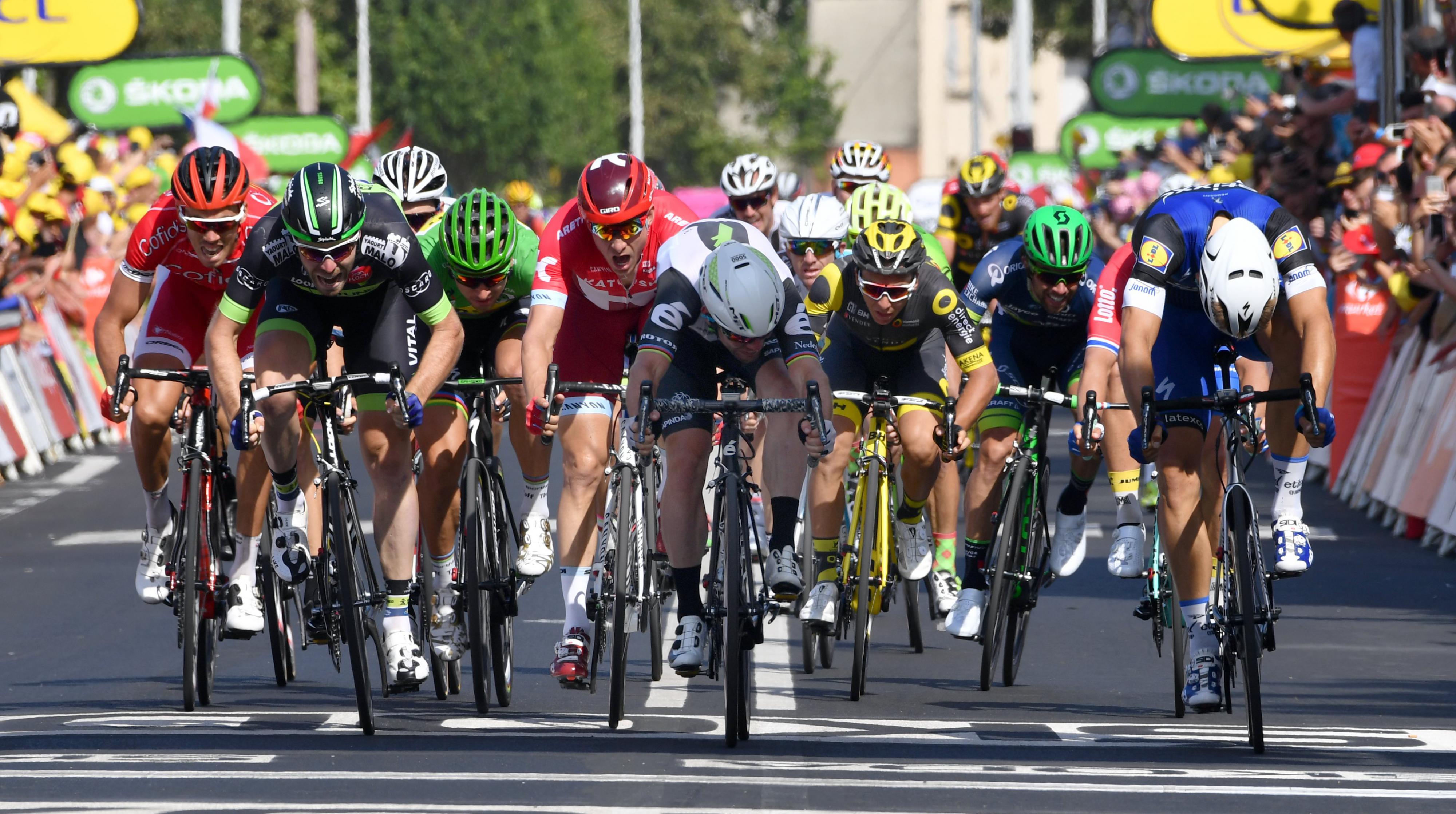 The best sprinters will be there in July, challenging for the coveted green jersey. We look forward to seeing who will take the sprint win on the Champs-Elysées and who will be pulling on the green jersey for the overall win of the points classification.