Until 1910, there were no true mountains in the Tour de France, only lesser cols. The 1910 race was the first time major mountain passes were included in the route, with the Pyrenees' Col d'Aubisque and Tourmalet taking centre stage. These fearsome climbs were made even tougher as they were unpaved. Taking the race up these rough tracks, it was no surprise these passes were often too much for the riders, with heavy bikes and cumbersome kit. This somewhat impossible task, for many riders, didn't deter the organisers, and a year later it was decided that the Alps would also be included in the 1911 race.

Even before the true mountains were included, one cyclist would be awarded the meilleur grimpeur (best climber) and this continued unchanged until 1933 when Spaniard, Vicente Truebe won the classification. Truebe was strong climber but a poor descender, and this resulted in the race director, Henri Desgrange, changing the rules in 1934 and offering bonuses to the rider reaching the top of climbs first; this is the year the king of the mountains classification officially came into play, with the aim of providing encouragement to the climbers. 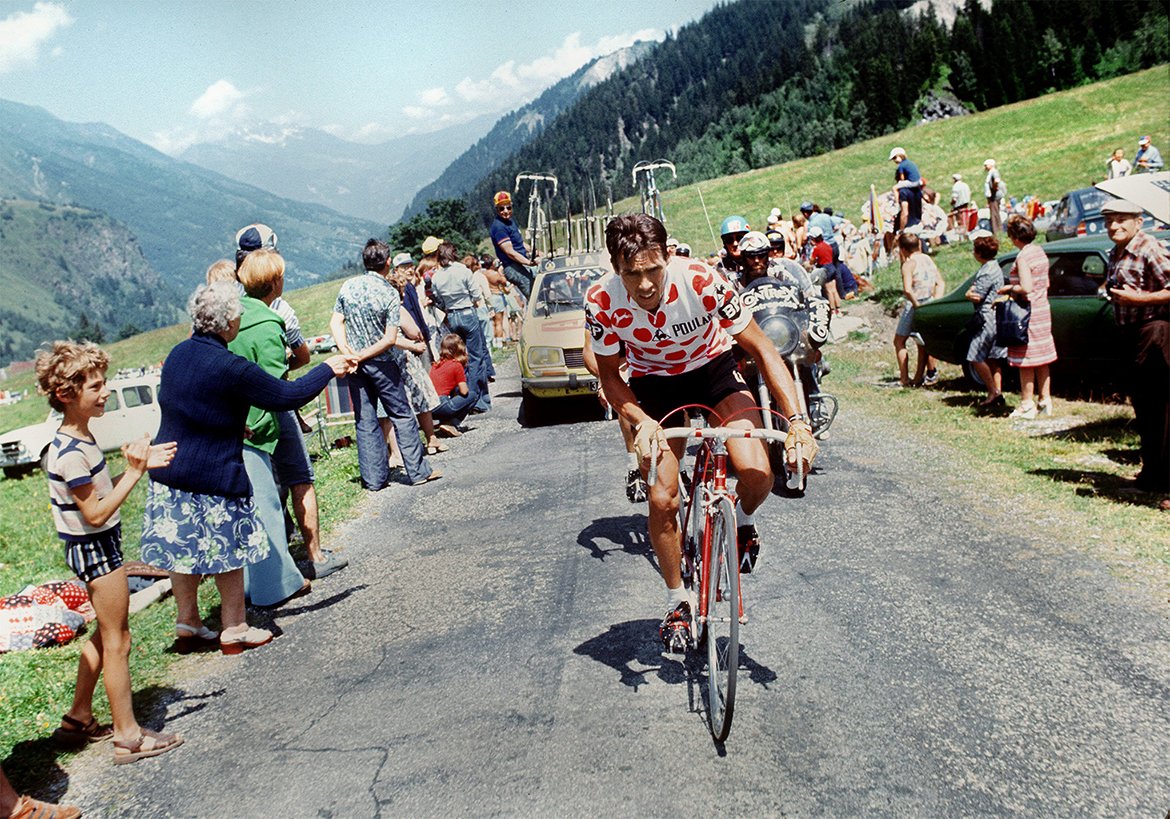 There was not a specific climber's jersey awarded until 1975 when the sponsor, Chocolat Poulain, chose the colour of the garment to resemble their polka dot confectionery wrapper. The polka dots have remained, and the jersey is now sponsored by Carrefour. The first wearer of the distinctive white and red jersey was Belgian rider Lucien Van Impe, who became an iconic figure in the race.

The competition awards points down 10th position, with riders being awarded points for the order they arrive at the summit. The climbs are categorised, and points determined, by their severity and difficulty (steepness, length and location in the stage/race). Categories go from hors catégorie (uncategorised) down to 4. 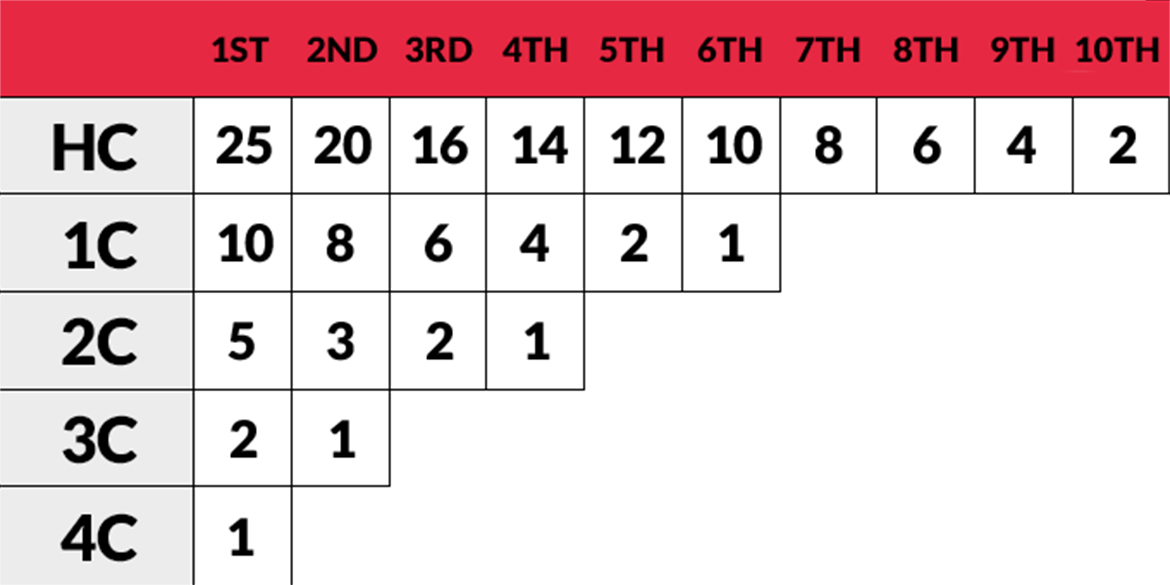 When riders are equal in points, the rider with the most wins on hors catégorie cols takes the victory or, if still equal, on the 1st category cols, and so on, until the riders are separated to determine a winner.

In past years, only the highest mountains were included but now lower category climbs also count towards the mountains classification. Nowadays it’s tougher for a rider to be challenging for both the mountain and general classifications, a feat that has been achieved ten times, mainly in the earlier years but most recently by Chris Froome in 2015.

So, with a classification about to enter its 77th year, it’s clear that this particular jersey has donned the shoulders of some truly brilliant cyclists, and with this in mind, we thought we’d highlight a few of the jersey’s biggest personalities, as well as some current polka dot contenders. 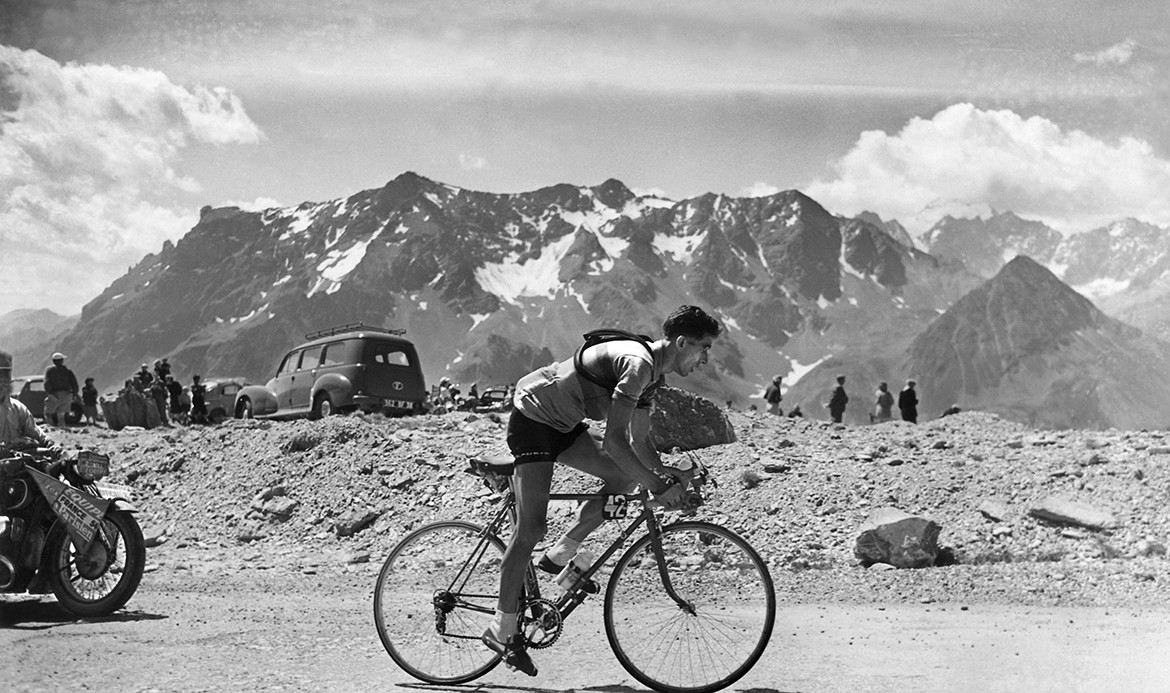 No list of mountain’s classification winners could ever be complete without mention of this Spanish legend. Having taken the title an astonishing six times in ten years, it’s hard to suggest that any climber has had such enduring success, sustaining their title as the best climber of the peloton through an entire generation. Dominating the peloton from 1954 and scooping his last victory in 1964, Bahamontes even took home a yellow jersey in 1959, such was his climbing prowess. Famed as the Eagle of Toledo, Bahamontes rode in a poised, upright position, fixated on the summit.

Beyond comparison when climbing, Bahamontes’ biggest weakness was his descending. Having come a cropper once too often as an amateur, he simply refused to descend alone, leading in one instance to his using a number of minutes advantage over the peloton to eat an ice cream at the top of a col. 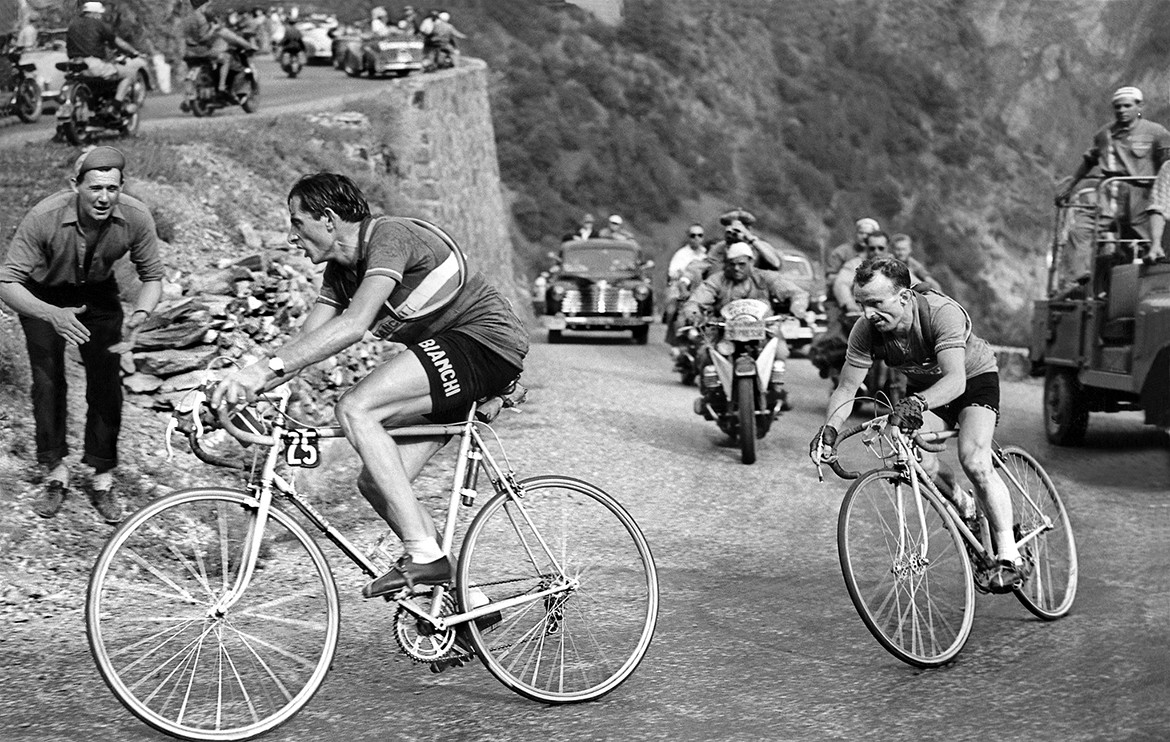 The Italian great - yes, we all know that Coppi was a bit more than just a mountain man, having won the yellow jersey twice, his attacking style was one that saw him prosper on the mountains, as he had many times before in the Giro D’Italia - so much so that to this day, the highest point of the Giro is graced with his name.

Having taken victory on the Alpe d’Huez in its first ever appearance in the race, Coppi was a rider to push frontiers, riding in celeste for Bianchi for the larger part of his career. Made perhaps more astonishing by the fact that his professional career was interrupted by the Second World War, Coppi, known for his physical prowess, was a true icon of cycling, and legend of climbing in particular. His premature passing was marked in the Italian press with the words - “The heron has closed his wings.” 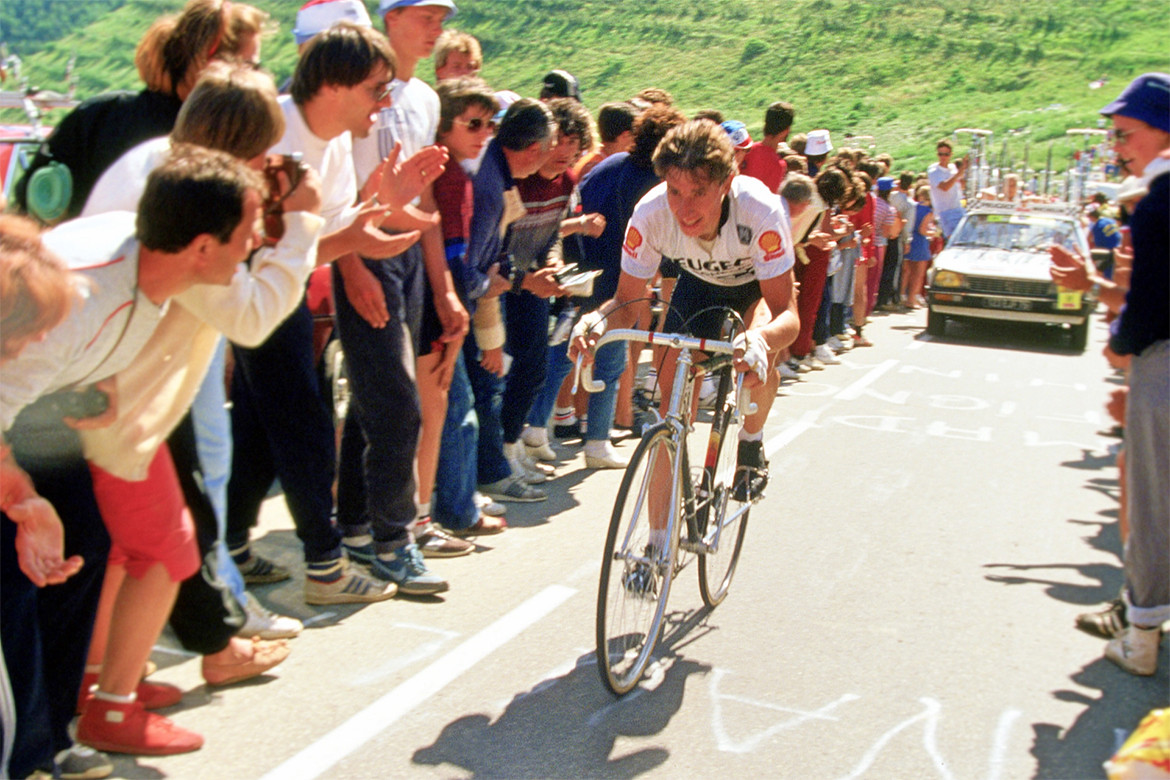 The first Briton to ever win a classification at the Tour de France, Robert Millar remains enigmatic, but undoubtedly was one of the greatest specialist climbers ever to wear the Polka Dot jersey all the way to Paris. Taking the title in the 1984 edition, Robert Millar famously romped home to lead the jersey at the Guzet-Neige ski station in the Pyrenees. A specialist on the climbs, Millar wasn’t too often a general classification contender, but, as the first British rider to seal a victory in a key Tour de France jersey, Millar is certainly deserving of iconic status amongst an elite group of riders. 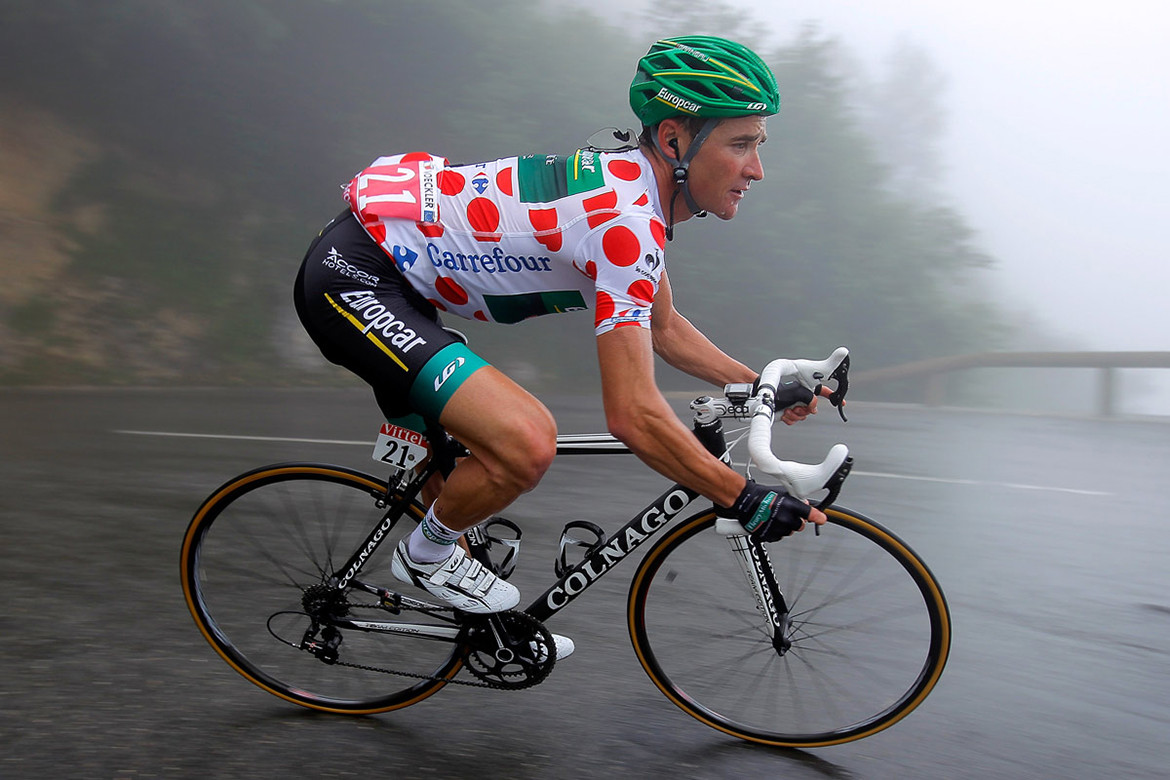 A favourite of the French public for his exorbitant style, Thomas Voeckler is held in high regard on any loop of the hexagon, having even worn the climber's jersey on a handful of occasions. A former winner of polka dot jersey during the 2012 Tour de France, Voeckler cemented his name as a great climber in the modern age sheerly by the nature of his victory.

Breaking away within 25 kilometres of the start line on the most difficult stage in that year’s edition, Voeckler proceeded to lead over the four categorised climbs of the day, before finishing a full minute and thirty seconds before the next rider. Carrying the jersey alone over the remaining mountain stages, Voeckler, though not a traditional climber, succeeded in cementing his name, and, the French flag, bringing home the climber's classification victory at the Tour. Riding the 2017 edition, it’s not too likely that we’ll see a repeat performance, but certainly, there’ll be an attack from Voeckler somewhere along the line. 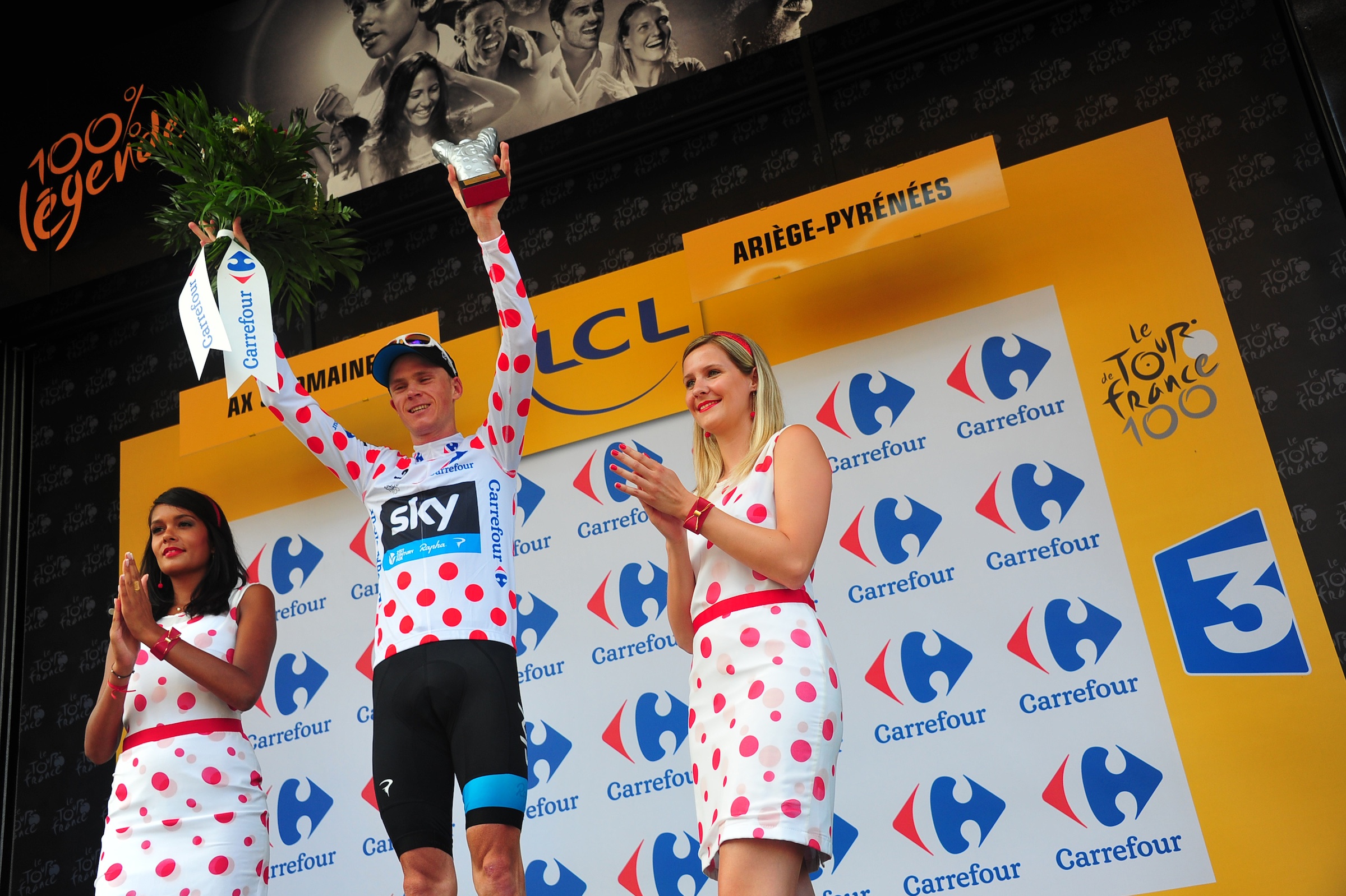 There will be fewer, but tougher, climbs in the 2017 Tour de France and the route has been designed to open the race up and allow Froome and Team Sky less control throughout.

France’s five mountainous regions are all included; the Pyrenees, the Alps, the Vosges, the Jura and the Massif Central, for the first time since 1992. The steep gradients will benefit the pure climbers in the peloton and give them more of an advantage against the likes of Froome, potentially resulting in a more exciting battle between the GC and mountain challengers.

This stage finishes atop the La Planche des Belles Filles, a short but steep climb hitting gradients of up to 20% by the end, and is the first major climb. The third time up this climb in the Tour’s history, Froome gained his first stage win here in 2012 when riding for Bradley Wiggins. At this early point in the race, there should still be plenty of fresh legs in the peloton to challenge Froome this year.

In the Jura mountains, three big climbs feature, all in the final third of the race, and this should give breakaway riders plenty of opportunities to make their move. 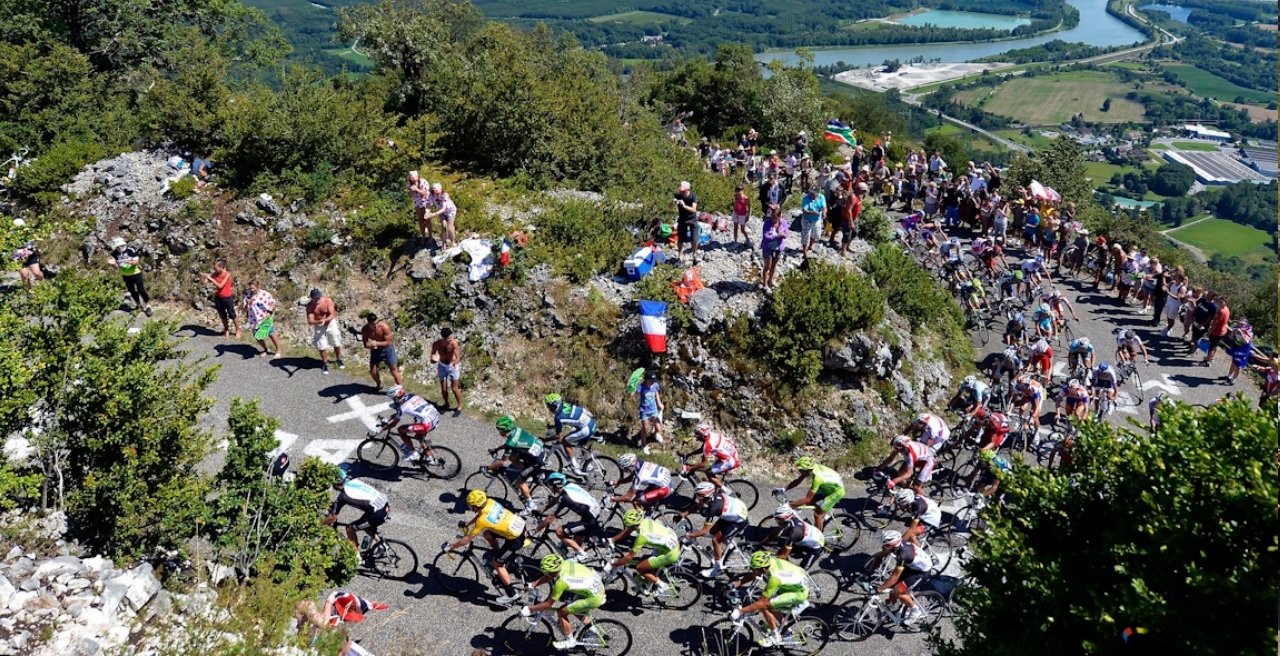 Seen as the toughest stage of the three weeks, this stage includes 4600m of climbing and an ascent of the Col du Grand Colombier, where the race hits it’s steepest gradient, at 22%, and is followed by a fast, technical descent. The final climb of the day, the Mond du Chat, is longer and steeper and probably not a welcome return for the riders.

Another summit finish, this time in the Pyrenean mountains, with five categorised climbs included, two of which feature in quick succession in the final part of the stage.

A short mountain stage, making this a challenging route containing three categorised climbs, that could make for some exciting racing action, with plenty of early attacks.

Heading into the Alps, the often-featuring Col d’Izoard, will become a stage finish for the first time. The last stage for the climbers in the peloton, and their last opportunity to gain some time, this is the second day in the Alps, coming after climbing the brutal Col du Galibier the day before.

Gearing up for the action

So, with a history and legacy arcing from the very earliest tours, the King of the Mountains title, and, more recently, the polka dot jersey has come to represent one of the single greatest competitions within the tour. Dramas played out among the clouds, battle royals and tense stand-offs, the matter of the mountain climber's jersey can be decided in a breakaway or even a last gasp sprint, making it a thrilling to any spectator, looking to the most superhuman of riders in the peloton. This year's edition is sure to throw some fireworks into the mix, so make sure to keep an eye on the red dots as they battle royale for the King of the Mountains title.