New for 2015, the GoPro Hero4 Session is the smallest and lightest camera that the Californian-based company has ever made, yet with the same easy to operate functionality and full 1080p 60fps capabilities it may just revolutionise the way we capture the action.

The iPod of action cameras; GoPro's Hero cameras have defined a genre. A professional-grade tool that has become the must-have for anyone from festival-goes to base jumpers, not to mention cyclists.

The GoPro Hero's small and incredibly easy to operate design coupled with its super-wide angle HD filming capabilities mean they are perfect for strapping to pretty much anything and taking along for the ride. The Hero4 Session is a leap forward, bringing you the same exceptional quality but in a smaller and lighter package.

The Nuts and Bolts

The first thing that strikes you when you initially lay eyes on the Hero4 Session is quite how ridiculously tiny it is. Approximately equivalent in size to a squared-off ping-pong ball, the Hero4 Session is 3.8 centimetres wide, long and deep and weighs just 74 grams making it 50% smaller and 40% lighter than any other Hero4 camera. 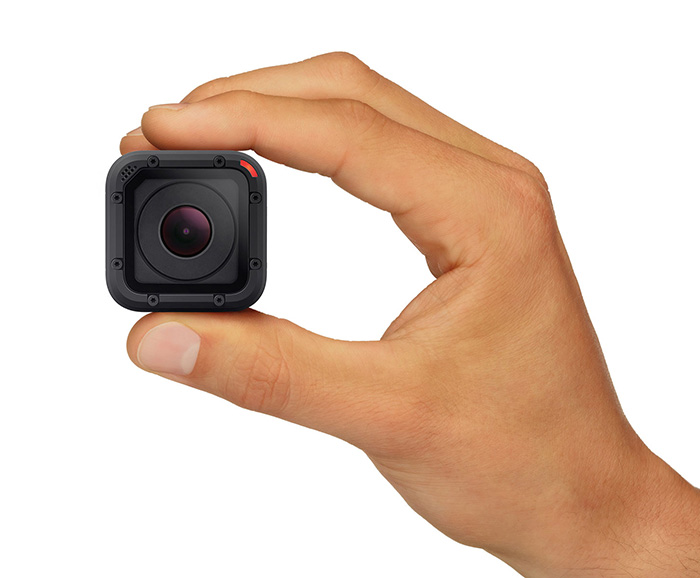 Rugged and waterproof, the Hero4 Session is waterproof to a depth of 10 metres and therefore does not require any separate housing like the the GoPros of old.

Operation has also been simplified, so a single press of the top button powers the camera on and starts recording or taking photos instantly. Press again to pause the recording, then another three second press of the button turns off the power.

One of the consistent problems with action cameras is the tinny sounding audio quality. GoPro have sought to rectify this with the Hero4 Session by employing a dual mic system, with one mic on the front of the camera and one on the rear. This means that when you are filming at high speed or in the wind the camera automatically switches to the mic that is best suited for optimal audio quality; hopefully making those hair-dryer sounding shots a thing of the past.

The battery has been built directly into the body of the camera, offering up to two hours of continuous recording time on a full charge and the memory card format is micro SD.

As with any action camera and perhaps even more so given the Hero4 Session's tiny size, you are going to want to mount this camera everywhere you possibly can. The Hero4 Session comes complete with three mounts that offer enhanced flexibility as well as compatibility with the gargantuan array of GoPro mounts that are already available on the market. 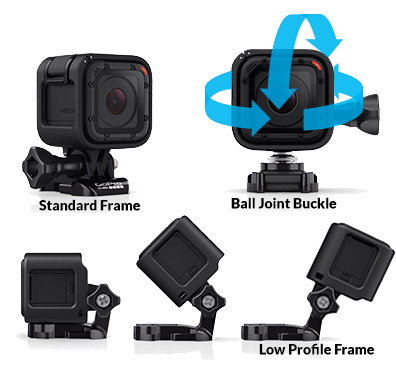 The low-profile frame allows for horizontal flexibility and the lowest profile of any GoPro camera ever- Perfect for attaching to helmets or other places where you would want to maintain the smallest possible drag profile.

Next-up is the standard frame, which can be used in conjunction with pre-existing GoPro mounts to create the ultimate setup for the best possible footage.

Finally, there is the ball joint buckle. This mount provides the freedom to change the angle of the camera on the fly so you don't have to keep stopping and un-mounting the camera.

As an added bonus the Hero4 Session automatically adjusts the capture orientation thanks to its Auto Image Rotation so you never have to adjust orientation in post production ever again.

Despite its diminutive stature the Hero4 still packs a mean punch in terms of video quality. Options include the top-end 1440p 30fps mode, 1080p 60fps and 1080p SuperView mode, which extends the capture space of the traditional wide-angle viewpoint to a 16:9 perspective.

Protune functionality lets you capture an increased amount of dynamic range in your footage, and is designed for those with an extensive post production workflow in mind. Straight out of the camera Protune footage will appear washed out and less sharp, but this allows for a higher level of adjustment in post production without any degrdation or loss of detail.

Not prepared to just stop at video, the Hero4 Session can capture high-quality photos as well with 8MP wide FOV or 5MP medium FOV options.

A dynamic burst mode comes with four options for speed from 3 photos per second to an ultra-fast 10 per second.

Time lapse functionality allows you to take a series of photos at timed intervals ranging from every 0.5 seconds to 60 seconds; perfect for capturing that once-in-a-lifetime sunset or for taking photos when your camera is out of reach.

With a design formulated for ease of use, and WiFi and Bluetooth functionality built in, all of the Hero4 Session's settings are adjusted via the GoPro app or using the GoPro Smart Remote.

Once you've nailed the perfect sequence of shots you can simply connect the Hero4 Session to your computer via a micro USB cable and edit the footage using the free GoPro Studio program.

Small but mighty; the GoPro Hero4 Session's new tiny size means it is going to open up a whole new realm of possibilities for mounting and capturing dynamic footage. The fact that it still features all of the functionality and connectivity that GoPro have built their brand name on means that if you are in the market for a top-end action camera, the Hero4 Session is going to be tough to overlook.

The GoPro Hero4 Session will be available to pre-order from the 12th of July.