Faster, lighter and stronger, this is what numerous cycling brands strive for when creating new products. When it comes to wheels, these three attributes can be the difference between a sluggish ride and a smooth and fast one.

As wheel builders go, Mavic has long been the benchmark when it comes to producing fast, light and strong wheels. From humble beginnings over 125 years ago, Mavic is now a market leader, providing neutral support for some of the world’s biggest races and events including Paris-Roubaix and the Etape du Tour. 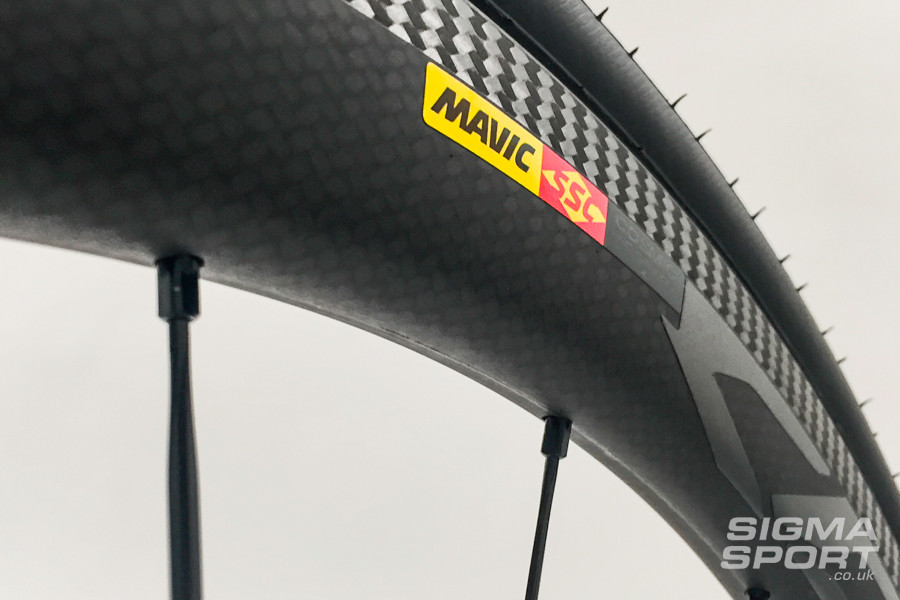 Each model has also become famous amongst the cycling fraternity with iconic names such as; Aksium, Ksyrium and Cosmic, immediately recognisable to riders the world over.

Even as an established wheel manufacturer Mavic is not a company that sit on its laurels. The Cosmic has long been a ‘go to’ wheel for those looking for an aerodynamic advantage whether that be when racing or riding a sportive.

For many years, Mavic has only made minor adjustments to this award winning design. That was until 2016 when the Cosmic was given a complete revamp. I was lucky to get my hands on a set of the Cosmic Pro Carbon SL wheels to see if this new design would indeed be faster, lighter and stronger than its predecessor.

Straight out of the wheel bags, first impressions were good. Aesthetically the French company has reinvigorated the graphics of this wheel, giving it a high-quality finish.

It’s not just skin-deep, though; holding the wheels I could feel they have been beefed up, now 25 millimetres wide, to improve stability and aerodynamics. The construction of this wheel has also changed, with a one-piece contour design. In layman’s terms, this means numerous layers of carbon fibre have been applied seamlessly on top of one another. This method requires no post machining. This is a big deal as the cutting of fibres during post mould machining significantly compromises the integrity of the carbon and its resistance to braking, impact and tyre pressure. 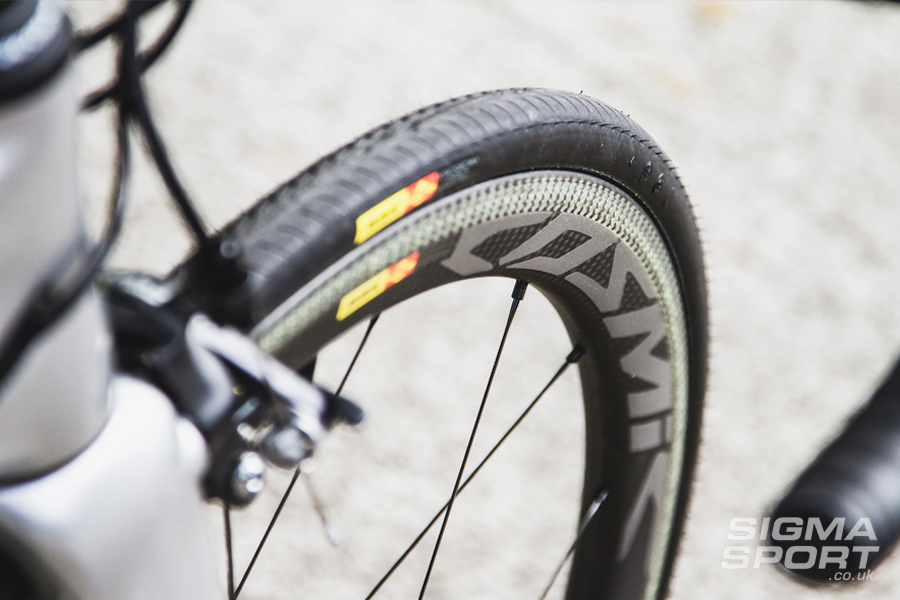 Carbon fibre wheels have a bad reputation when it comes to braking and especially so in the wet. Mavic has claimed to address this with their new iTgMax carbon technology. This offers consistent braking, whatever the weather, temperature or speed. This braking track offers practically zero surface variations and so eliminates unpredictable braking and improves consistency.

Using their patented process, Mavic has now laser treated the braking surface. Essentially this creates a surface that provides the highest braking performance in all conditions, especially in the wet.

So on paper, the Cosmic Pro Carbon SL Wheelset seems impressive. The real test would be out on the road. I was lucky to have a Colnago V1-R to ride and thought these wheels would be the perfect compliment for just such a bike.

Heading out to Majorca with its fast descents, tight mountainous roads and rough farm track lanes I was keen to see if the latest Cosmic was all it claimed to be.

Supplied with Mavic’s newly developed Yksion Pro GripLink and PowerLink Tyres this was also going to be a test of grip and rolling resistance. 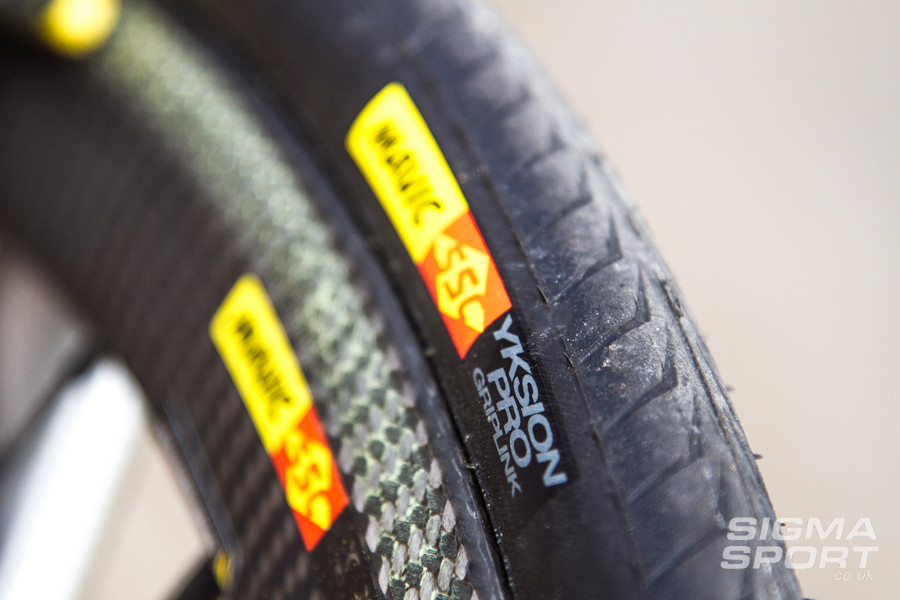 First impressions were good. These wheels felt spritely as I accelerated away from my hotel. They picked up speed well and once rolling felt smooth. Encountering a few rough sections of road the wheels seemed to take even the biggest of holes in their stride. The steel spokes are bladed with 18 on the front and 24 on the rear. These have been arranged in a radial and an Isopulse configuration for the perfect balance between speed and strength.

The 450 gram rim weight means these wheels, without tyres, weigh an impressive 1450 grams, putting them in the same ballpark as more expensive wheelsets from companies such as ENVE and Zipp.

Tested both out on the road and in the wind tunnel, Mavic claims these wheels offer the lowest inertia in their category. Spinning along at over 35km/h I was not going to disagree. Whereas some deep section wheels take a bit of work to keep up to speed, the Cosmics felt effortless. The 40-millimetre deep rim has been NACA wind tunnel tested to provide both a fast and stable ride. 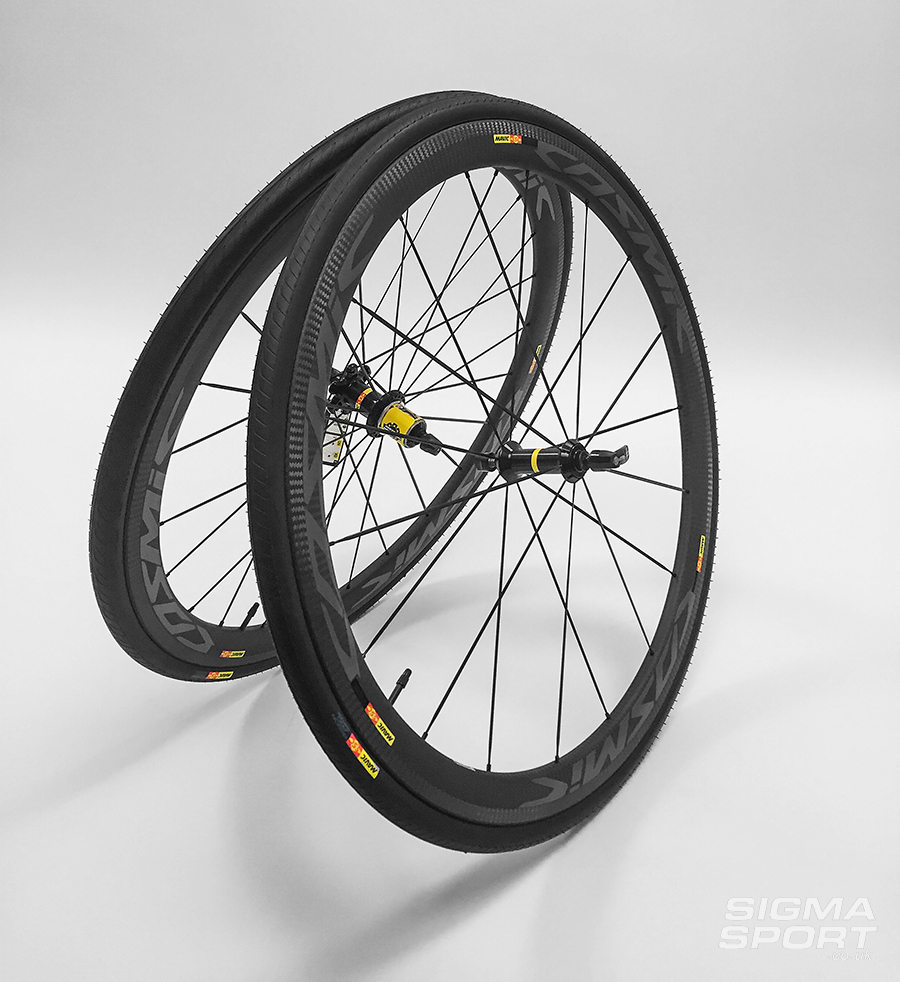 Weighing 65 kilograms I often find stability issues with deep section wheels, especially on fast windy descents. I am pleased to report I had no such issues with this wheelset. With a wide 25 millimetre profile (17 millimetre internal) even in the strongest crosswinds, I found the wheels to be both assured and predictable.

So it’s safe to say these wheels roll fast but the big question is do they stop fast as well? In a word, ‘yes’.

These wheels require Mavic’s yellow brake pads to be used. These have been designed by SwissStop specifically for these wheels. The only slight issue I had with these pads were how fast the rims ate my initial set. With the first set wearing fast as they bedded into the rim I found the rims were much kinder to the second set of brake pads I fitted. 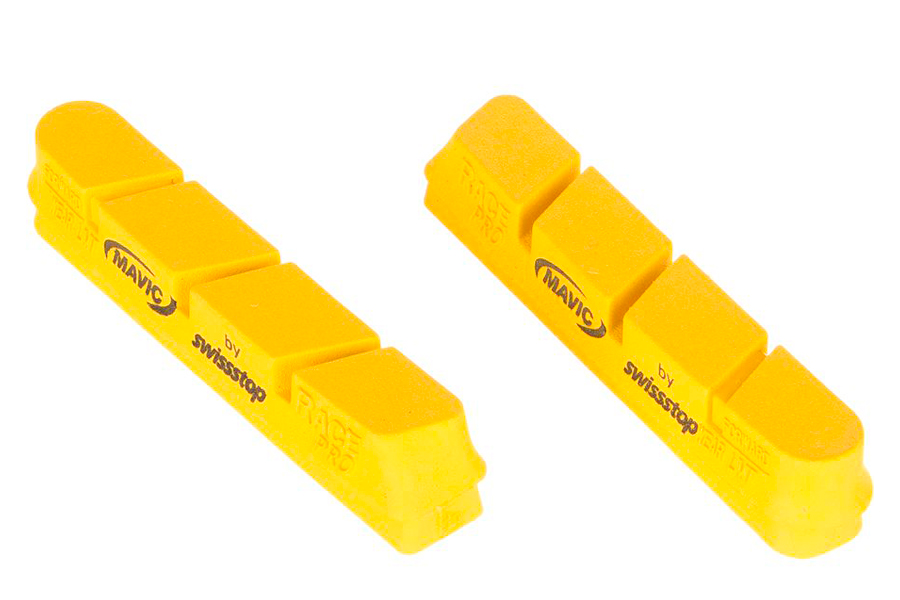 Performance in the dry was impressive. Even down some of Majorca’s fastest mountain descents I could feel the improved braking track working its magic. Predictable, assured and powerful, the next test was to see how they coped in the wet.

Having previously used Mavic wheels with their famed Exalith braking surface I was expecting big things from this new laser cut rim. Majorcan roads are notorious for their ice like surface when wet, I was taking no chances and kerbed my speed. I was pleased to find the same consistent braking I’d experienced in the dry, no scary moments and no grabby spots. Only when the rain became torrential did I find a slight reduction in braking performance, but after adjusting my braking distance accordingly I didn’t find this to be too much of an issue.

Mavic has created tyres for specifically for both the front and rear wheel, with the front offering exceptional levels of grip, while the rear concentrates on power transfer. I have always been impressed with the Yksion Pro and GripLink Tyres in the dry, finding they roll fast, grip well and due to their 127 TPI casing, they wear well too. After over 1000 kilometres on these tyres they still felt like new, showing very little in the signs of wear and no cuts or issues with punctures.

In the wet, this hard casing does suffer a little and although improved they still come behind Continental Grand Prix 4000S II or Specialized S-Works Turbo Cotton tyres when it comes to grip in wet weather.

The Cosmic has long been the wheelset of choice for both amateur and professional cyclists, so to change the design is always a risky move but one which I believe has definitely paid off for Mavic. The 3K carbon fibre rim, improved freehub design and braking track mean this wheelset is really punching well above its weight. Agile on the climbs, fast on the descents and stable in the corners, for those looking for a faster, lighter, stronger wheelset I would highly recommend considering the Mavic Cosmic Pro Carbon SL Clincher Wheelset.