Sigma Sport backed team all set for the UCI 2.2 Tour of Al Zubarah

Sigma Sports will be supporting a team of British based elite riders taking part in the UCI 2.2 Tour of Al Zubarah. The four day stage race takes place in the Gulf State of Qatar between 17 and 21 December 2014 and will comprise of a prologue and three road stages.

The team will consist of Ride London-Surrey Classic King of the Mountains Winner and 2014 Tour of Britain Top 20 finisher, Steve Lampier and Sigma Sports sponsored rider and former Premier Calendar winner, Wouter Sybrandy. They will be joined by winner of multiple national B road races this season, Rhys Howells, and the two exciting young sprinters and also multiple race winners, Tom Neale and Rory Townsend. The team will be managed by former IG-Sigma Sports director sportif Simon Howes. 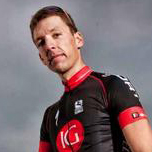 After a long flight from Heathrow to Doha, with a quick stop over in Bahrain, we arrive at our hotel around midnight, local time. The race organisers arranged for the whole race to stay at the five star Marriott City Plaza, in the centre of Doha.

The city of Doha is pretty unreal, like something out of a movie, with many high-rise buildings of the most bizarre architecture, full of flashing and changing lights at night. With multiple pools, health clubs, restaurants and bars, we definitely won't get bored in between the stages!

After a leisurely start and breakfast, it was like Christmas had come early for the boys as we received our new Sigma Sports Castelli kit. It was then time to go for a spin to loosen the legs after a day of travelling.

As we started to head out of Doha, the lack of a team mechanic at this race became apparent, as in my rush of building my bike I may have forgotten to fully tighten my stem bolts. This resulted in my handlebars going straight, while my bike was going a completely different direction, in this case straight into Steve who was riding next to me! He had little spill but nothing too bad, luckily, but I was left feeling pretty guilty about it! If this hadn't made the day eventful enough, our team car, which is in fact a pickup truck, suffered a puncture during our ride. For the Qatari people, who aren't used to seeing cyclist anyway, seeing 5 guys in lycra, some underneath a car, in the middle of the desert, must have seemed like a mirage.

With a bit of team effort, we managed to change the wheel and get back to the hotel for some nice relaxing at the pool and good food at the hotel restaurant. When I say pool, it's actually a rather big pool area with palm trees, which resides on the 7th floor of the hotel. Although the temperature at the moment is a very pleasant 25 degrees, it actually gets up to 50 degrees in the summer, which means the water in the pool isn't very far off that. Very nice! 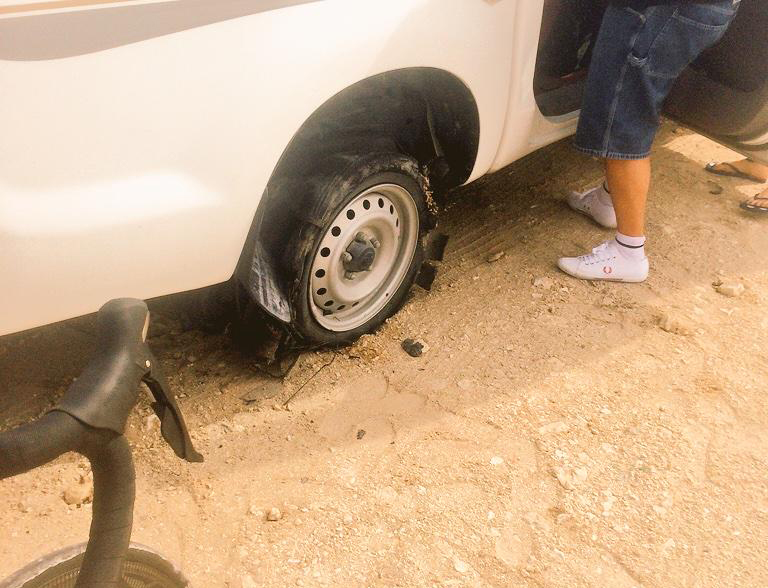 Race day! Another good spin in the morning, which included some through and off and motorpacing, it was time to head to the Aspire Zone for the prologue. The Aspire Zone is an area of Doha which was purpose built (like everything here) for the Asian Games and is full of the best facilities for pretty much every sport.

The prologue was a 3.9km lap of the park, all on paved paths. After a few laps warm up, Rory was our first man off and did a very credible time that would get him just outside the top 20. Rhys was thought to have finished 4th, but unfortunately, this was later changed to 7th. Still a top performance though. All of us finished in the top 25, seconds away from yellow, so a good result all round. 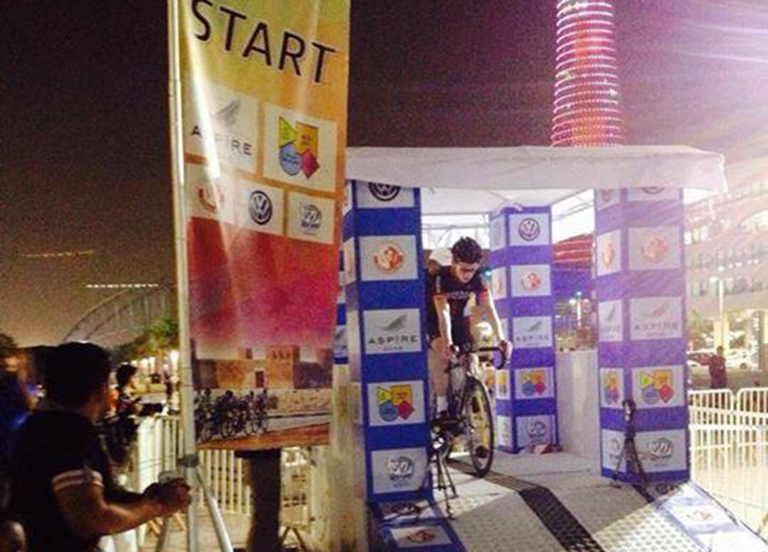 The profile of the first road stage was mainly characterised by a 70km dead straight stretch of road. Maybe not the most exciting prospect at first sight, but given we would be crossing the desert and the 20mph crosswinds forecasted, echelons were always going to be the order of the day. 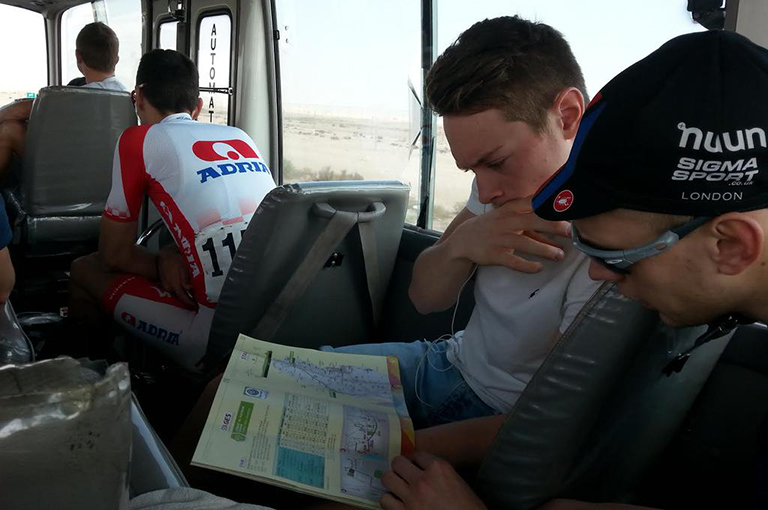 Sure enough, the first half hour was into a headwind, but as soon as we turned off, the exposed road and crosswinds did their duty and the race was truly on. It was a fight to stay near the front, especially when the, on paper, strongest team in the race, Slovenian Continental Team Adria Mobil hit the front and lined out the bunch in the left hand gutter. Steve and I fought our way to a good position and ended up in the first echelon. This group would soon gain a one minute advantage on the second group, which contained the rest of the Sigma Sports team.

With 15km to go, a few attacks whittled down the group to 10 riders, unfortunately cramp meant Steve was unable to stay with the group at this crucial point. With three teams having multiple riders in the front group, it was inevitable another small group would get away. In the end, only one Adria Mobil and one Algerian National Team rider managed to get away from the other 8, with the Algerian taking the win. I sprinted to 7th place on the stage, with the rest of the team coming in two minutes later.

After a transfer from the hotel in Doha to the north of the peninsula, the 2nd stage covered just under 120km over one big loop and a short finishing loop. The early crosswinds once again broke up the bunch in echelons, with me and Rhys making the first one this time.

A change of direction and lack of corporation in the sizeable group meant a big regroup with about 50 km to go. Riding into a block headwind meant nothing was going to escape the peloton, until we hit the finishing loop.

As a small echelon broke away, some great work from Steve got me back into the front group, just as it was getting ready for another round of gutter attacks.

Going through the finish to start the final loop, 7 riders got a gap and, spotting the danger, I rode across with an Austrian. With a few top GC riders missing out, these 9 worked very well together. Unfortunately, bad positioning meant I finished last in the group sprint, but moved up in the overall standings. Steve and Tom sprinted well to finish at the front of the group behind, which had lost about 2 minutes. 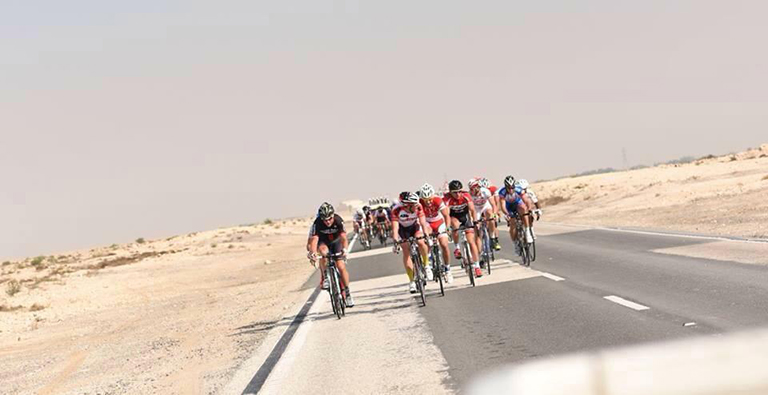 The final stage started in Doha, so we decided to ride the 15km to the start at yet another impressive football stadium. With the Algerians protecting their yellow leaders' jersey, a breakaway of riders who posed no threat to the overall rankings was allowed to get up the road. This made the first half of the stage very easy for the main peloton, but we all knew this only meant the second half of the stage would be even harder.

Racing truly kicked off when turning onto a crosswind section, the bunch quickly split and all Sigma Sports riders but Rhys were within the front group. Being lined out in the right hand gutter means your constantly having to pay attention to all the debris, as well as the cats eyes lining the side of the road. Just as we had established ourselves in the echelon, I hit a cats eye and punctured. Fortunately, Rory was nearby to help out during the 6km chase back to the front group, not being helped by the lack of team cars behind the group. This is where cycling really becomes a team sport, as Rory selflessly dug deep to help me back to the front group, protecting my GC chances.

Just as I got back on, attacks started from the front group and with the GC contenders watching each other, a group containing Steve was allowed to get up the road and fight it out for the stage victory. Steve took 7th on the stage, whilst I had to work hard to stay with the GC leaders to finish 6th on GC. Tom was very consistent all week and finished as 4th under 23 rider, as well as being 3rd counter for the team award, where Sigma Sports finished 4th with Steve, Tom and myself all in the top 20 overall.

All in all, we went into this race not sure what to expect from a desert race in the middle of our off season. What we got was some excellent racing, we were well looked after by the organisation, the team worked well together and everyone gained valuable experiences of riding these type of races. We are all very thankful of  Sigma Sports and Nuun for their support of kit and hydration respectively. 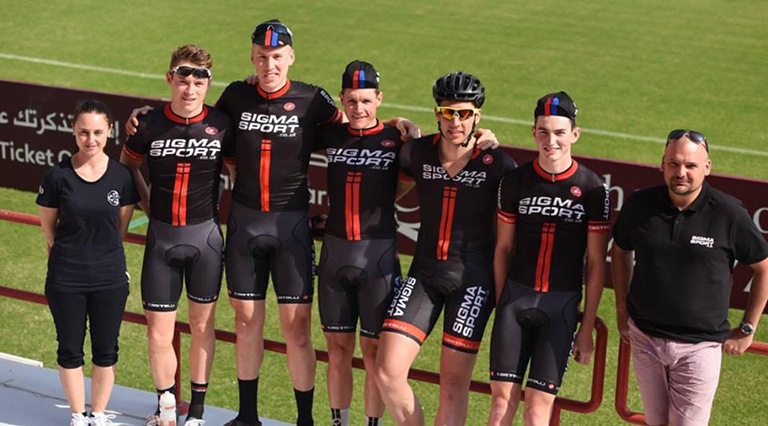